I have an excited little Koopa this morning. He woke up early and has been chomping at the bit to go to school since he moseyed out of bed. I tried to convince him to go back to sleep until the sun rose, but my efforts were in vain. I suppose I understand his enthusiasm. I remember how excited I used to feel on field trip days.

Today Robby's class is going to the Manassas Battlefield. Needless to say, he is thrilled. He spent about an hour last night with Mr. Bill, reviewing the Battlefield and absorbing as much knowledge as possible. (Mr. Bill is our resident expert on the Civil War. I venture to guess that he knows as much about the history of the Battlefield as the Park Rangers who will be leading our tour.)

It seems that the weather is going to cooperate, providing us with a gorgeous day to spend outside. I'm happy that I'm able to help to chaperon the trip and I'm looking forward to spending the day with Robby and his friends.  Although he won't understand the tour, I suspect that Timmy is going to have a fabulous day as well. He relishes spending time with the "big kids" and will be thrilled to be part of the excitement.

For the past five months, every Wednesday we have packed up and headed to our CSA farm. We pick up our weekly box of freshly picked veggies, climb onto the tractor to go into the fields to help harvest whatever is ripe, and spend some time playing on the massive playground.  No matter how hectic our schedules have become, we all look forward to our weekly trips to "our farm."

Over the summer we have enjoyed nearly every feature of the sprawling farm. From fishing to climbing, I have done almost everything with the boys. The only thing that I haven't done with the boys is play and bounce on the giant jumping pillow.

Going inside a bounce house is within my comfort zone. In fact, Timmy and I bounce almost every day. I have found that it is a great way for him to expel some energy while I reap the benefits of a full body workout. Nothing tires him out for a nap more than going jumping with me.

The jumping pillow, although still centered around the same activity, is completely different than a bounce house. Instead of a step to enter, the sides are sloped. Whereas the bounce house is flat, the pillow is essentially a giant bubble. The curves have always intimidated me and have served to keep me grounded.

Unfortunately for Timmy, he has always been a forced observer rather than participant on the jumping pillow. Yesterday, I cold tell that he really wanted to jump with his brother. Wanting him to have fun, I decided that it was time for me to try. I scooped him out of his stroller and carefully walked with him onto the top of the pillow.

Although it wasn't the easiest climb, I made it to the top! My little Hamlet was beyond happy to be bouncing with his big brother. I'm sure that his squeals and giggles could be heard across the farm. We bounced, played and laughed until we were sweaty and tired.

I am so happy that I was able to conquer the jumping pillow. Like so many things, my own fears turned out to be the true obstacle.  Climbing to the top of the pillow wasn't the easiest thing, but the view from the top (my two happy boys playing together) was well worth the effort! 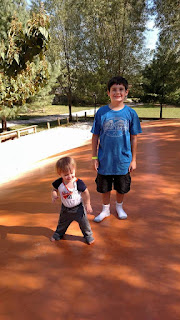 Even though it has been more than 24 hours, I continue to feel shaken by the encounter with the deer. I keep replaying the incident, trying to figure out if I did something wrong. Of course I know that it would have been impossible to miss the darting deer, but that reality is doing little to soothe my frazzled nerves. Instead of focusing on the accident, I am trying to count our blessings. I was upset when I saw the imprint of the deer bum on the hood of my SUV, but it could have been far worse.

Yesterday afternoon Mr. Bill showed up at my front door, carrying two pieces of wood and a hammer.  He instructed me to pop the hood on the SUV, which I did without question. I learned a long time ago to not question Mr. Bill when he is set on a project. I didn't know what he was planning, but I knew enough to realize that I wasn't going to stop him.

After inspecting the crumpled hood from a variety of angles, he put his lit cigarette on top of our trash can before putting a 2x4 slightly above the biggest indentation. After he was content with its location, he began to hit it with the hammer.  After a few good whacks he removed the wood and put the cigarette back in his mouth.  He moved around the car and repeated the process three more times.

When he was done, all of the major dents were removed from the hood. I can still see a slight bubble from the incident, but all other remnants were literally beaten away. I'm delighted that the only evidence of our run in with the deer are a few rogue hairs caught in the grill and some bad memories.
at 5:17 AM No comments:

Yesterday, instead of going directly home after picking up Robby from school, I took a bit of a detour. I wanted to make the most of the quintessential fall day by spending some time at the park. I knew that the boys would have fun running, climbing and playing while I enjoyed the bonus of tiring them out. I decided to propel myself to hero status by swinging by McDonald's to pick up a french fry picnic treat.

Robby ran out of the car and was busy climbing before I even unbuckled my seat belt. Timmy, although he didn't know why, was mimicking the excitement of his brother.  He was kicking and squealing so loudly that I struggled to get his shoes on little wiggly feet.  He took off running after his brother as soon as I picked him up from his car seat.

The brothers played for almost 90 minutes, sometimes together but usually with Timmy running after Robby.  I was again amazed by how different the two are from each other.  Robby was so proud to have finally conquered the playground rock wall, which he claimed to be his "oppressive nemesis." Timmy, seeing his brother celebrating at the top platform, decided that he wanted to give it a try. Before I knew it he was 3/4 of the way to the top and I was pulling him down. Whereas Robby always calculates the risks of getting hurt, his little toddler brother has no fear! (Rest assured I was spotting him and he was safe throughout the climb.)

After a wonderful afternoon of playing with my kiddos, we packed up and headed home. Both were sweaty, filthy and smiling from ear to ear, which I consider badges for a fun day. Although we were less than five miles from our house, Timmy quickly fell asleep in the car as we drove home.

He was woken when I slammed on the brake before hitting the large deer that ran in front of my car. I managed to swerve enough to keep the imposing buck from smashing through the windshield, but not enough to avoid it altogether. The front right panel took the brunt of the impact, leaving a significant (and probably expensive) dent.

Thankfully nobody (with the exception of the careless deer) was hurt, but the accident certainly took the wind out of my sails. I was shaken up and frightened by the experience. Deer are beautiful to watch in our woods, but aren't nearly as majestic when the dart in front of your car. 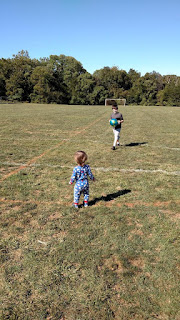 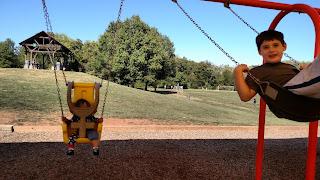 This past weekend was spent doing nothing of consequence. The highlight Saturday was my purchasing a new pair of lounge pants, which I proceeded to change into as soon as I arrived home. Refusing to leave the house for the rest of the day, we spent the afternoon playing games, watching movies and baking cookies.

On Sunday our family vegetation weekend continued, although we did venture outside. The weather was absolutely perfect with bright blue skies and a cool breeze. Robby and I (with Hamlet in tow) went for a long bike ride through the neighborhood.  I love being able to play outside without breaking into a sweat because of the oppressive heat. With the exception of returning to school, autumn may be my favorite season.

All good things must come to an end, and that includes our weekend of relaxation. Monday is upon us, and I have loads of work waiting for me. I could have made a dent on the pile over the weekend, but I needed to unplug and relax more.

Back to reality. Happy Monday!
at 6:24 AM No comments: