This week I feel like we have finally settled into our school routine.  Hamlet doesn't meltdown when we drop off Robby at school, which is a welcome improvement. Hearing him sob each morning was heartbreaking, especially because I knew his reasons for feeling sad. He possesses an unbridled adoration for his big brother and loves it when he is home with him during the day.

Settling into a routine has been good for me as well. I thrive off of routine and although we are busy, I'm feeling less stressed because I can anticipate our daily flow. The older and busier I become, the more I have come to appreciate my daily planner. Sometimes I miss the days where I would wake up without having to consult my calendar while sipping my coffee.  But then I remind myself that my boys are the reason behind the majority of our appointments, and I smile.

This weekend will be busy with fun autumn activities.  On Saturday we are going to the Tank Farm for their open house event. Robby is excited to explore all of the artillery, and is especially anticipating watching the flame thrower in action.  On Sunday we are going to a Touch-a-Truck event for Timmy. I'm sure he will enjoy seeing and exploring all of the trucks on display.

Exploring trucks, guns and tanks doesn't rank among my favorite activities, but I'm looking forward to the events because of the boys. I'm hopeful that we can tear Scott away from his football watching to accompany us on our adventures. The weather looks like it is going to cooperate, so it should be a fun weekend for everybody.
at 7:11 AM No comments:

I have been having really bad luck with electronic devices lately.  Last week I was forced to buy a new television when a toddler thrown projectile cracked the screen of our existing television.  I know that Timmy didn't mean to break the television, but the end result was the same regardless of his motivation.

The morning after we hung our new television I began to experience issues with my Ninja Coffee pot. After coveting the Ninja Coffee for months, Scott bought me the elaborate pot for my birthday in May. I was delighted with all of the bells and whistles, and until recently it made a great cup of coffee.

Unfortunately, the bells and whistles only worked for a few months.  Despite running the clean cycle numerous times, including twice with the cleaner sold by the company, the pesky clean light remains illuminated. The light is annoying, especially considering the expense of the Ninja system, but it is now interfering with the performance of the machine. Each morning I never really know the amount I am going to see in the carafe. Sometimes it works, sometimes it doesn't.  Playing roulette with my coffee is not advantageous!

I called the company a few days ago and discovered that the pricey pretty pot was not paired with helpful customer service. After checking the serial numbers and documenting the issues, the customer non-service representative agreed that the pot was under warranty. The company representative informed me that a lot of customers were experiencing issues with the clean light (a fact I already surmised after reading their Facebook page) and that they were prepared to offer me a remedy. For a mere $20 the company would mail me the replacement part necessary to repair the known issue with the machine.

I was appalled that I was expected to pay $20 to cover "shipping and handling" for a repair piece for a machine under warranty.  After questioning the charge, I was automatically referred to the warranty agreement I "accepted when I purchased the machine."  I was insulted by the true lack of interest demonstrated by the company representatives and have vowed to never send them another cent.  I will not support a company that does not stand behind its products or its customers.

Last night I experienced a customer service exchange that was actually polite and helpful.  To my frustration, I went to turn on my new computer and discovered that it had malfunctioned.  Less than one month old, I was frustrated and immediately called Lenovo.  After answering a few questions, I was encouraged to return it to the store for an exchange.

I no longer had the receipt, but BJs Wholesale Club was able to look up the purchase and refunded my money without an issue.  After such a frustrating experience with Coffee Ninja to secure a simple replacement part, it was refreshing to interact with a company that values the customer service experience.  Because of this quick and courteous exchange, I will definitely be buying my next coffee pot (NOT a Coffee Ninja) at BJs!
at 6:25 AM No comments:

I decided to escalate my issue with my insurance adjuster by sending her a copy of yesterday's blog.  She never acknowledged receipt of the link, but I am happy to report that by mid afternoon my liners were finally approved. I can't definitely say that my blog influenced the approval, but it is certainly a strong causal relationship. Whatever the prompt, I'm happy that this battle is now over and I'm looking forward to receiving my new liners. My limb will be grateful when I finally throw away this tattered (and rather odoriferous) liner.

My leg has been feeling "off" lately. I wouldn't say that I've been in pain, but rather I have been acutely aware of my prosthetic use. I'm optimistic that the new liners will help to correct the situation and I will return to normal.


Robby's extra curricular schedule has kicked into overdrive.  Every day we are going to at least one, sometimes two, activities after I pick him up from school. Some days I feel like I am more of a taxi driver and waitress than anything else. I suppose this is typical of a parent of a tween.

Thankfully Timmy enjoys going on community trips, and has grown into a good little traveler. I've managed to locate all of the play areas in the vicinity of each of his brother's activities, which helps to stem his boredom and gives us a purpose while his brother is occupied with his class and/or lesson.

With our growing calendar, trying to fit trips to Elliot (my prosthetist) would be overwhelming. Fingers crossed the new liners will fix my issues, because I really don't have time for major tweaks right now!
at 5:52 AM No comments:

Living with a disability is exhausting. I'm not tired because I use a prosthesis, and I consider myself lucky not to battle constant phantom pain. Instead of physical causes, my fatigue stems from constantly being in a battle.  After more than a decade of fighting, I am becoming battle weary. I just wish that getting what I need to live a full life as an amputee wasn't so unnecessarily complicated.

Nearly a month ago I started the process for new liners. I visited my doctor and secured the proper prescription. I also made sure that the need was properly documented in my medical file. (In many ways I'm lucky because I know exactly how the notes need to read, and how the prescription should be worded.) The paperwork, along with my prosthetists notes and documentation, were submitted to my insurance adjuster.  Receipt of the request has been acknowledged in August, but I am still walking around on hole-riddled liners.

Numerous calls to my adjuster have yielded only curtly worded justifications for the delay. At this time she is "evaluating" the request. The whole concept of "evaluating" my need for prosthetic liners baffles me. My amputee status is not going to change, and liners are considered standard for prosthetic use. The liners are off the shelf and are about as no-frills as you can get. I'm not asking for anything spectacular, out of the norm or groundbreaking. I'm just asking for the supplies I need to continue to live my ambulatory life.

In addition to my own insurance battle, I am actively lobbying against the Graham-Cassidy healthcare bill. This bill would remove Essential Health Benefit mandates, leaving every amputee at risk for the return of lifetime maximums and unattainable prosthetic coverage. The bill would also allow insurers to financially penalize those with pre-existing conditions by charging more for less coverage. Those who are living with a pre-existing condition, which incidentally is approximately 75% of all individuals between 45-54 and 84% of those age 55-64.

If you are interested in learning more about the implications of the Graham-Cassidy Bill on the limb loss community, I encourage you to check out this week's podcast on amp'd. Dave and I broke down the complicated legislation and provided template letters to send to your Senators. I'm tired of dealing with insurance and healthcare, but until the battles stop I won't quit.  The stakes, my mobility and prosthetic coverage for my friends, are worth the fight.
at 6:13 AM No comments:

Friday evening Robby and I were able to cross another item off of our bucket list.  After years of talking about it and never quite getting around to making it happen, we finally took a pottery wheel class. (Thanks Groupon!) I had so much fun spending time learning a new activity with Robby.

Despite having no experience with a pottery wheel, Robby was a natural. After watching the teacher, he was able to replicate the project, a bowl, with seemingly little effort. I was not nearly as adept with the clay, but I after some extra instruction (and a quick patch job from the teacher) I was able to create a quasi lopsided bowl.  In this family, Robby definitely has the artistic abilities.

On Saturday we packed up and headed to the parade and community street fair. Robby strutted down the route like a proud peacock, waving to everybody and enthusiastically demonstrating his Taekwondo skills. I cheered and followed him along the sidelines throughout the route so that we could walk back together. Towards the end of the route he was chosen to break a board, which was undoubtedly the highlight of the event. (He would like me to include the fact that he broke it on his first time, using an ax kick.)

After the parade we walked through the fair, visiting with the vendors and collecting bags of freebies and giveaways. By the time we reached the car I was loaded down like a pack mule with assorted branded junk. Robby had a great time unpacking all of our swag bags, carefully sorting everything in piles. He was smiling and unveiling each item like it was a trophy, but I couldn't help but think that the last thing I needed was more piles of crap on my kitchen table.

All told it was a good weekend. I was able to take a much needed nap on Sunday, and I'm feeling stronger and more centered for the week ahead.  Hopefully it will be a good week. 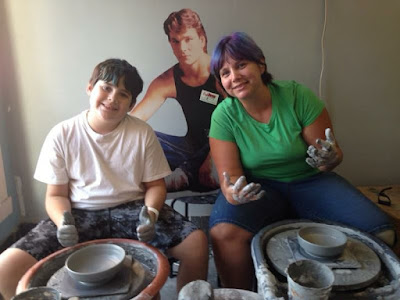