Well, I was managed to get the swelling under control yesterday which was advantageous because I needed to be mobile so I could replace our toilet. It turns out that the fallen medicine cabinet broke not only the lid but caused a hairline crack in the tank itself. We discovered a puddle of water on the floor in the morning, forcing our hand on the toilet replacement project.

Thanks to YouTube, Scott and I were successful with our toilet replacement project. It certainly wasn't the evening we had anticipated, but we both feel a sense of satisfaction that only arises after a successful home improvement project has been completed. It feels good to know that our toilet will be in good shape for years to come (barring another disaster).

In the midst of replacing the toilet, Timmy developed a fever. I know that it is simply his immune system running amuck and that there is nothing else organic at play. In a few days, he will rebound and be his normal self. These bouts seem to arise without notice and leave just as quickly. For now, my little guy is relying upon cuddles, the Grinch movie and chicken noodle soup for comfort. 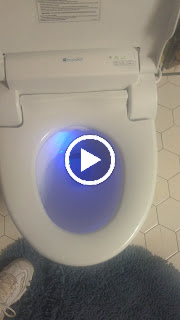 I woke up this morning to discover that my leg doesn't fit. I tried several times to no avail. After hobbling to retrieve my coffee, an icepack and a cocktail of ibuprofen and water pills, I've settled onto the couch hoping that the swelling recedes. Thankfully Timmy is content watching Polar Express so I have some time to try to return my limb to its normal size.

I'm not sure why my limb is swollen this morning. This reaction usually only happens when I eat salty food, if I had been playing in intense heat, or when I have had too much red wine. None of the above apply, so I am going to chalk this up to one of those weird things and hope that my remedy works.

One of the most frustrating things about living with a prosthesis is the vulnerability of my mobility. When the stars align, I can walk without giving it a thought. When one thing goes array, I struggle with pain throughout the day. When I can't handle the discomfort or I am risking injury, I am forced to go without my leg. Relying upon manufactured items for my mobility is frustrating at times, especially when everything doesn't work perfectly!

I'm hopeful that my limb size will return within an hour or two. I'll post an update later today.  Fingers crossed!

In all fairness, Timmy didn't mean to cause havoc yesterday. Instead of being deliberate, his wake of destruction occurred naturally. It seemed that everything he touched either broke, ended up sticky or left his little hands permanently stained. Needless to say, it wasn't the best day for either of us.

Our morning started by his tripping and spilling freshly pressed strawberry juice all over both of us, thoroughly dousing my new white shirt and his favorite Yoshi shirt.  After changing our shirts Timmy tried to vault behind the couch, where he constructed his own little fort, only to land in a large pile of cat vomit.  He emerged with his hands wailing, flinging the vomit against the walls and floor as he ran down the hallway.

The afternoon was relatively calm until he slipped in the mud in our yard. After yet another wardrobe change, he and Robby decided to go for a bike ride.  Robby fell off his bike making a sharp turn, scraping his knee.  Although he was fine, I cleaned it out and applied a bandaid when they returned home.

Timmy, not wanting to miss out on the excitement, insisted that he also had a boo-boo. While I was cleaning Robby's real wound, Timmy climbed onto the top of the toilet and tried to open the medicine cabinet to get a bandaid for his fake injury.  The entire cabinet came crashing to the ground, smashing the lid of our porcelain toilet and spilling the cabinet contents everywhere.  Thankfully he wasn't hurt, but the mess took nearly an hour to clean. Keeping it classy, we now have aluminum foil in place of a tank lid.

During dinner my little tornado bit his tongue, causing him to drip blood all over the table and floor.  On his way to the sink to rinse his tongue, he slipped on a train and knocked over a Tupperware bowl of freshly cut red beets. I have given up trying to remove the pink stains from the ceramic floor. Hopefully, it will wear off with time.

Although yesterday was both frustrating and exhausting, I know that Timmy was not deliberately causing messes. We both just had a bad day. I'm hoping that today is better, because I am beginning to worry about the damage being inflicted on our house and yard.
at 7:40 AM No comments:

My great plan of staying at my Mom's until Monday to avoid driving in the rain was a miserable failure. The rain continued to fall throughout the day, so I ended up having to tackle the wet roads despite my great plan of avoidance. The drive home was both long and miserable, but we arrived safely and without incident.

I had a fantastic time visiting with my Mom and it's always sad to leave. Even though we were busy, the weekend just flew by in the blink of an eye. Robby and Timmy also had a fun visit, playing with my Mom and reconnecting with the Cousin Crew.  I love hearing the Cousin Crew's laughter resonating throughout her house, even when it occurs long after they should have gone to bed. I'm counting down to summer vacation when they can be together more often!

Today I'm back to reality. I have my own to-do list to tackle (assuming that I find the motivation to get started.) Hopefully Timmy's improved behavior will continue, allowing me the time I need to finish a project!
at 5:42 AM No comments:

With the nonstop rain and intermittent winds from yesterday, we decided to stay at my Mom's an extra day to avoid driving through the nasty conditions. I missed seeing Scott (and my traditional banner waving from our deck) but it was nice spending the entire weekend at my Mom's house.  This morning the boys and I will be packing up and heading back home.

Saturday I spent the day helping my Mom knock some more items off of her to-do list. In the morning I power washed her porch, walkway, and driveway. In the afternoon, Robby and I tackled purging, organizing and cleaning out her shed. The shed had become a catchall for every miscellaneous item and was crammed to the point of immobility. I woefully underestimated the job. I thought it would only take an hour or so but it turned into a four-hour project.

On Sunday the rain began to fall and continued throughout the day.  My niece and nephews returned from their Dad's on Saturday night, allowing the Cousin Crew to spend the day together. After my sister left in the morning, her kids hopped in my car and we went Mother's Day shopping for my sister and my mom. We came back with bouquets of flowers and set to work on making breakfast for their mom and Nana.

After I decided that we were going to stay through the day Robby and I decided to make meatball lasagna, one of his favorites, for dinner. I'm glad that we made the decision early because in midafternoon the doorbell rang. My sister's new boyfriend and his children decided to surprise her with a visit. Thankfully I make big lasagnas and, after throwing in some extra cheese and a few more noodles, we had more than enough for 12 adult sized stomaches.

I had a nice Mother's Day, spent with my Mom and surrounded by the laughter of the Cousin Crew.  Robby painted me a beautiful flower pot and planted an aloe plant in the center. Timmy colored me pictures and covered me with hugs and kisses throughout the day.
at 8:17 AM No comments: