Despite my aspirations of embarking on a calm and restful day, yesterday began as chaotic. Typical to his routine, Robby lamented going to school and procrastinated getting dressed until the last minute. When I finally told him that we were in the final countdown, he stormed to his room. I went to into the kitchen to put his lunch into a bag.

I heard the door slam, and then a moment later, I heard Timmy cry. He cries every  morning when Robby locks him out of his bedroom, so to be honest, I didn't think much of it. As the seconds ticked by, I realized that there was something different in Timmy's cry. I put down the vanilla pudding cups and went sprinting down the hallway.

My poor little Hamlet's thumb was pinched and trapped in the door jam. I immediately opened the door and scooped him up. I tried to look at this thumb while rocking him, but he was protective and wouldn't let me examine the ouchie. When his sobbing calmed to a whimper, I put him in the car to take Robby to school.

Timmy is my rough and tumble kid. He is adventurous and mischievous, a combination which often results in bumps and bruises.  He usually cries for a moment and then moves on. When he was still whimpering 45 minutes after the incident, I knew that something was wrong.  When I arrived at Robby's school I was finally able to glimpse his thumb. It was swollen to twice its normal size, and a disturbing shade of purplish red.

I left Robby's school and drove directly to an Urgent Care office. It turns out that Timmy's little thumb is fractured. It is not dislocated, so a cast is not recommended. Instead we are to try to ice the appendage and provide ibuprofen for pain. The fracture should heal on its own, and we were instructed to follow Timmy's lead about use.

Trying to ice the hand of a two year old is a fruitless task. He won't sit still long enough for any benefit. Improvising, I put the ice packs away and filled up the sink with water and ice cubes. He pushed the learning tower over to the sink and happily splashed and played in the cold water for 30 minutes. By the time he was finished, the ice was melted and water was all over my floor, my counter tops, and my little boy, but his hands were cold and the swelling was reduced.

I feel horrible that Timmy has experienced his first broken bone, but probably not as guilty as Robby. I venture to guess that he cried almost as much as Timmy over the incident. He is wracked with guilt for slamming the door and injuring his brother. I know that it was not intentional, and I have no doubt that the days of slamming doors are over. 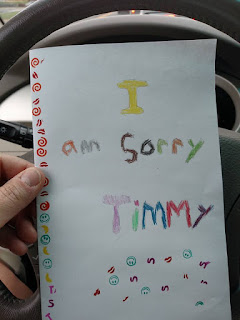 Timmy is slowly starting to rebound from his bout with Croup.  His barking cough is beginning to quiet, and his voice is returning to normal. I predict that he will be fully recovered and back to his normal, active self by the weekend.

Unfortunately, the string of sleepless nights have taken its toll on me. I am reminded that I'm no longer in my 20's, and that I can't drink a single cup of coffee to perk up when I'm sleep deprived. My Keurig has been getting a work-out, supplying me with a steady stream of liquid caffeine to keep me upright and mobile.

Today I have the calendar cleared during Timmy's nap time. Typically I take advantage of the quiet by schedule conference calls or Skype meetings. Instead of working, I'm going to completely unplug and disconnect so that I can take a nap. If I don't take care of myself, soon I'll be the one in a sick bed.

With Timmy still battling croup, yesterday was a long day. My little Hamlet didn't feel well, yet he wasn't sick enough to stay still and just cuddle. I could tell that he wanted to play, but once he started his illness quickly took over. Instead of stopping, he just became frustrated and sad. When he becomes frustrated he cries and screams, which in turn exacerbates his croup.  Much of the day was spent spiraling through this unfortunate cycle.

As the day progressed his breathing became more labored and his fever rose. An afternoon visit to the pediatrician resulted in both a breathing treatment to help restore his oxygen levels and a steroid shot.  I'm hoping that this will help to ease his symptoms as the virus runs its course. I hate seeing him uncomfortable, and watching him gasping to breathe is terrifying!

We had another rough night, but I'm hoping that the steroids will start to work their magic soon. I know that Timmy is as tired as I am, and we could both benefit from a restful sleep. Fingers crossed that improvement is seen today, and that my little toddler returns to his happy and mischievous state by tomorrow.
at 6:58 AM No comments:

Sunday night I woke up to the telltale barking cough coming from Timmy's room. I put my leg on and began to move in one swift movement, anxious to help to ease his breathing. We sat in the humid bathroom for almost an hour until the barking resided and his breathing was no longer labored.  Last night we repeated the cycle of sleep, barking, steam and sleep several times.

I remember waking up with croup when I was young. The terror of not being able to breath clearly, coupled with being forced to sit next to a steaming shower etched strong memories. Although I now know that my Mom was never going to throw me into the shower, I remember being scared of the hot water. I suspect that Timmy has the same fear because he begins to scream from panic as soon as the water is turned on. Curling up in the corner of the bathroom floor and quietly waiting for him to come and sit down next to me isn't comfortable, but it seems to be the best way to keep him calm.

His cough is still barking this morning, and he sounds extremely congested. I worry about my little guy, but I know that croup is more scary than dangerous. I'm going to try to keep him quiet today. I wish he was interested in cartoons, because it would be the perfect day to cuddle on the couch and watch Paw Patrol. Instead, I'm going to be trying to keep him off the trampoline and off the cat.
at 7:11 AM No comments:

Many years ago I realized that the commercialized version of Mother's Day is both unrealistic and unattainable. Expecting a day filled with doting from your children and husband only results in disappointment when they fail to reach the Hallmark ideals. Not long after coming to terms with the non-existent Mother's Day in my fantasies, I lowered my expectations to thwart disappointment. Unfortunately, this year I am afraid I didn't lower the bar enough.

All I wanted for Mother's Day was to sleep in, to have Robby deliver me coffee in bed and to go to the farm for a day of family fun.  Despite my being vocal about my wishes, I found myself pulling a squawking Timmy out of his crib before dawn. Not willing to wait another 4 hours for Robby to wake up, I made my own coffee and quietly entertained Timmy by myself.  So much for sleeping in on Mother's Day!

When Scott woke up he could tell that I was disappointed with his failing to wake up to take care of Timmy, forcing me to abandon the first of my Mother's Day wishes.  Frustrated and feeling hurt, I left to do some grocery shopping before the stores became busy. To his credit, Scott must have heard me when I expressed my disappointment in my Mother's Day morning. When I came home, the traditional "World's Best Mother" banner was hanging from the porch.

Unfortunately, it was filthy, wrinkled from being balled up in the garage and hung upside down. Any sentiment that was meant to be communicated was lost by the careless execution of the gesture.  Robby finally rolled out of bed around 10. I was greeted with a request for pancakes to be delivered to him as he played a computer game. So much for his waking up to make me breakfast!

It was perfectly clear that nobody in the house was concerned with honoring me on Mother's Day.  I was quite relieved when the dirty covered banner finally fell off of the porch, almost as if it was the universe granting me permission to cancel the holiday.  I called time of death on Mother's Day and decided that the day would continue as a normal Sunday.

The key to a happy #mothersday is to keep expectations to a minimum.
A photo posted by Peggy Friedman Chenoweth (@amputeemommy) on May 8, 2016 at 5:37am PDT