After an eventful few days in San Francisco, it was especially nice to come home!  I arrived home in the early evening, affording me a little bit of time to play with Timmy before he went to bed. I'm looking forward to spending the day with them, playing at the farm and just having fun.  After being away for four days I'm feeling the need for some dedicated kid time.

I'll post some pics this evening.
at 7:24 AM No comments:

Yesterday morning I experienced an issue which left me baffled, angry and confused for the remainder of the day.  To be honest I'm still confused by the incident but I'm slowly coming to terms with the knowledge that I may never understand the irrational and ignorant behavior that was exhibited.  By now I should know that it is fruitless to try to reap logic out of ignorance!

After grabbing a latte and bagel (my traveling treats), I asked the Desk Clerk at the hotel to call me a cab so I could head to the office.  After the cab was confirmed I headed outside and chatted with the valet while waiting. A few minutes later cab #405 pulled up, and I headed towards the vehicle.

I'm sure I went wide-eyed like a deer as he was screaming. Thinking that perhaps he was expecting a different fare, I explained that the hotel had called the cab for me. He stormed past both me and the valet and into the lobby, where he continued to direct his rant to the Desk Clerks.

The Desk Clerks were apologetic as they contacted another company to secure me a cab. I assured them that his behavior was not a reflection of her and thanked her for her time. I managed to maintain my composure, but inside I felt like curling into a corner to cry.  While it is true that the driver's outburst was not a reflection of her, it was most definitely a response to me.

It is a horribly deflating feeling to have somebody find you so revolting that they would rather cause a public scene than to let you into their vehicle. I was dressed modestly and was well-groomed. At this point I can only assume that his reaction was caused by my amputation, but it is hard for me to accept that this level of discrimination and blatant ignorance exists in 2017. I have spent the past 24 hours desperately trying to figure out another variable.

Because the behavior was so irrational I decided to pursue the issue. It turns out that the Desk Clerks were aligned and had already contacted the Taxi Commission to report the incident. I understand that the Taxi Commission became more interest when the hotel representatives offered tapes of the exchange.  Apparently they have cameras both outside and inside the lobby, and the footage confirms our accounts of the incident.

I feel somewhat vindicated by the knowledge that this driver will be held accountable for his outburst, but I continue to struggle with the incident. How could the prospect of driving me be so vile that he reacted so strongly?  Why did my prosthesis (if that was indeed the lightening rod for his rage) bother him to the point of refusing service? Why was I not good enough to get into his cab?

My self-esteem took a hit from his outrageous and ignorant fool, but I'll rebound. I already feel stronger with the knowledge that he has been reported. I will never truly understand prejudice because I don't relate to the thought pattern.  Instead of arguing and getting into a screaming match I stayed calm, held my head high and took the incident to a higher authority.  I'm proud of my response and I'm working to let go of the negative emotions that have been stirred by the incident.
at 9:33 AM No comments:

Last night I had the opportunity to reunite with a childhood friend.  Vince and I met in Nursery School and he was a fixture in my school life through elementary, middle and high school. It's odd to reflect and realize that I saw him every school day through my formative years. What is stranger is the reality that I haven't seen him since our high school graduation 25 years ago.  On a side note, how did 25 years pass since I was in high school?  Yikes!

Vince and I did what most middle-aged high school friends end up doing when they are reunited- we hit the bar and went out to eat. It turns out that relaxing with an old friend, catching up and reminiscing was just what I needed. My stress level evaporated as we chatted and I credit him as much as the cocktails.

It's amazing how lives can take such drastic turns, but childhood memories keep those formative bonds lit. It was fun thinking back and recalling our elementary school memories. My goodness it feels like I grew up in a different world!

After my brief escape from adulthood, today I'm returning to the office for another day of meetings. Timmy has settled down for my Mom, which has been a huge relief. Hopefully the trend will continue today and he will be charming and happy until I return tomorrow. Fingers crossed! 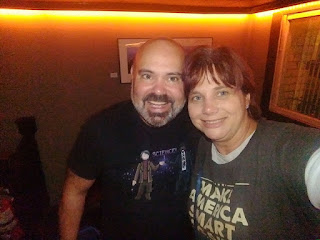 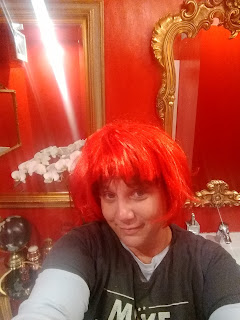 I'm not sure if it was the jet lag, missing my kids or feeling uncomfortable in a foreign environment, but yesterday was not my best day.  By the time the work day was over I just wanted to go back to my hotel and crawl into bed. I quickly fell asleep, and I'm feeling better (and stronger) today.

I've spoken with my Mom several times and realized that my worries were becoming a reality.  Robby was behaving, but Timmy was starting to frazzle her. He has developed a propensity for throwing objects, especially at his brother, when he wants attention. Of course, he wants attention at every moment and he resumes throwing as soon as his decided playmate moves onto a different activity.

We were at our wits end at home to tackle the throwing issue, and I know my Mom is experiencing the same frustrations. Time out and the removal of toys has no impact on his behavior.  I'm open to suggestions because we have emptied our bag of tricks.
at 9:37 AM No comments:

Kudos to all of the road warrior Moms. I honestly don't know how parents manage to maintain their sanity while traveling frequently for work.  Preparing for this week long trip was angst ridden as I tried to make everything okay for everybody else. In fact, so I spent so much energy preparing the kids that I didn't remember to pack until five minutes before we were scheduled to leave the house. Thankfully I'm a low-maintenance person and I was able to gather everything I needed quickly.

Not only is preparing to leave frustrating, but I found the travel absolutely exhausting. I was fine for the first five hours on the flight, but the last hour became extremely uncomfortable (hovering on painful). My legs began to cramp, my fingers swelled and I started to feel flush. By the time the plane finally landed I was ready to bolt off of the plane and run into the cool air.

Today will be busy with meetings. Wish me luck!
at 9:37 AM No comments: