My boys are so incredibly fortunate to be able to call my Mom their "Nana." She loves them unconditionally, lights up whenever she sees them (virtually or in person), and fully embraces all of their interests. They frequently receive "just because" surprises in the mail that accurately reflect their current interests.

Last week Robby mentioned to me that he wanted a reproduction Soviet uniform from WWII to wear to his history class. I checked online, but the only uniforms I located were shipping internationally with a 6-8 week wait. The wait time would put Robby to the end of his course, negating his need for the uniform. I explained the situation to Robby and, although disappointed, we stopped searching.

I relayed my frustrations to my Mom when I couldn't locate a uniform shipping domestically. She agreed that it was frustrating, but didn't have any other suggestions about where I could look. I didn't realize that by mentioning it to my Mom, I had activated her internet bloodhound.

Three days after we abandoned our search, my Mom called. I knew from the excitement in her voice that she was sharing good news. I was stunned when I learned that she had maintained her uniform search and, not only did she locate the appropriate size and era for sale, but that it was being sold by somebody within a mile of her home. What are those odds?

Because of their proximity, my Mom went to pick up the item in person. More than simply locating a uniform for Robby, she also obtained a connection for WWII era reenacting. The individual was excited to learn about Robby and has offered an invitation to join his reenacting group. It was so hard keeping this secret from Robby, but after all the work my Mom invested, I wanted her to be able to share the uniform and the news of her new friend.

Yesterday we packed up and met my Mom in the McDonald's parking lot. I haven't seen her since December, so it was really nice to see her in person. The boys were also excited with their brief reunion. Timmy was a chatterbox, demanding his Nana's full attention and regaling her with stories and new information he has gleaned.

Robby was stunned and silenced when he received the uniform. He is so excited that, when we arrived home, he ran into the house to try it on and to show his Dad. Over Easter we hope to meet with the reenactor to learn more about his squad and Robby's possible involvement.

I'm not sure how my Mom managed to pull this off, but she knocked fulfilling Robby's wish out of the park!

After a rough few days post vaccination, I can honestly say that I finally feel like normal. I went the entirety of yesterday without a fever. My energy levels, which were zapped from the fever and vomiting, have rebuilt to my pre-vaccine norm. All things considered, emerging immunity feels fantastic!

The weather has been gorgeous, which has certainly helped me rest and recover. Timmy has been content rollerskating up and down our driveway while I relaxed and watched from my glider swing. Being able to just sit quietly, in the warm sunshine, has worked wonders for both my health and my mood.

This morning I feel both strong and energized. Instead of sitting on the swing, I hope to sway Timmy to hop onto his bike to go for a ride with me. (I don't anticipate he will need much convincing, he loves to ride his bike.) Even though Scott and I are both vaccinated, we are continuing to follow all of the social distancing protocols. I have to say though, it is easier to stay home and away from people when the weather is this inviting!

I am three days post vaccination and I am feeling near normal. I'm wary because I felt better yesterday morning but declined throughout the day. By late afternoon my fever was hovering around 101 and I was battling a wicked headache. Hopefully those systems will stay at bay today!

Even though I wasn't feeling fantastic, Timmy and I spent a lot of time outside playing. The weather was warm (near 70 degrees) and the bright sunshine felt happy and comforting. While I sat on my swing, Timmy thoroughly enjoyed rollerskating up and down our driveway. Usually I feel compelled to play with him, but yesterday I was completely content to be a spectator.

Fingers crossed I continue to improve. Feeling lousy stinks, even when you know it is in the name of immunity.

Friday afternoon I received a call from Timmy's immunology clinic with an invitation to participate in a parent vaccination clinic. I didn't heitate to say yes, and quickly set up an appointment for Sunday. I honestly felt like I hit the lottery when I finally secured a vaccination appointment.

Sunday was not only my vaccination day, but it was also Scott's birthday. In anticipation of feeling punky after the injection, I tried to do all of the birthday prep on Saturday. Robby helped me bake his cake and dinner was all prepped and ready to be cooked. After a quick birthday breakfast in bed, with help from my assistant Timmy, I hopped into the car and headed to receive my vaccine.

Unlike everybody else I know, and probably because it has just been approved, I received the single dose Johnson & Johnson vaccine. Although the injection stung a little more than I expected, the process was smooth and easy. I began to feel mild vertigo as the day wore on, but I was able to cook and clean up after Scott's birthday celebration without an issue.

Unfortunately, everything went downhill in the early evening. I began to feel chills as my fever quickly rose. I went to bed, curled under numerous blankets and tried to visualize my body building immunity. Around midnight, when my fever reached 104.1, I began to vomit. Thankfully, after I expelled everything in my stomach I began to feel an easing in the nausea.

My fever broke in the early morning, and I spent much of yesterday relaxing and rebuilding my strength. I felt tired and wiped out from the fever, but I was functional. I wasn't expecting this strong reaction to the vaccine, especially since I have had the flu shot habitually for years and never lodge a complaint. Like so much this year, this experience was different.

I am feeling nearly normal today, and I am still grateful for the vaccine. If you have a chance to get your injection(s), please do it. Just plan an easy evening and day after just in case. 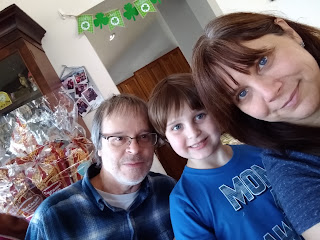