Ever since Robby was four he has loved hearing the Nutcracker music. Whenever it plays, albeit in a store, mall or at home, he stops and strains to listen. This year he learned that the music actually accompanies a ballet (I don't know how he missed this tidbit) and he asked if we could try to get tickets.  Thanks to a fantastic LivingSocial deal, I was able to grant his Nutcracker wish with ease.

I am not sure what YouTube video or movie he watched, but Robby certainly had a vision of what one wore to the ballet. Earlier this week he asked me what I was planning on wearing on our date.  He was not satisfied with hearing "a dress" because before I knew it, my little guy and I were shopping for something he deemed "fancy enough." Robby carefully shopped the store aisles until he found me the perfect dress. Blue velvet because it felt smooth and looked "fancy and festive."

Last night was our date night. He insisted on wearing his tuxedo, complete with top hat. (He wanted a walking stick but I managed to convince him that he didn't need it because he doesn't have trouble walking.) I donned my new dress, complete with sparkly necklace and tiara.  Thanks to my little stylist, we certainly made a statement.

After dinner at Cheesecake Factory (gentleman's choice) we headed to the ballet. Needless to say, we garnered smiles and compliments wherever we walked! Robby loved the ballet and beamed in awe throughout the performance. As soon as the final curtain fell he began asking to make our Nutcracker date a tradition. I guess we will add it to our ever-growing list of Christmas activities! 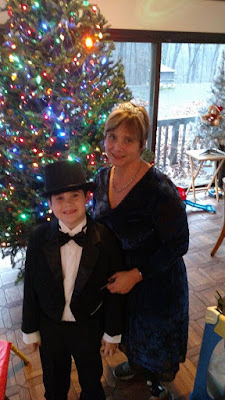 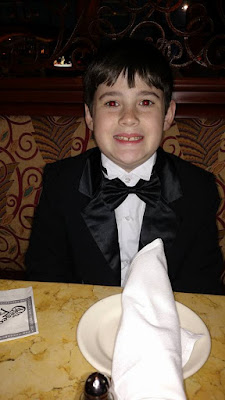 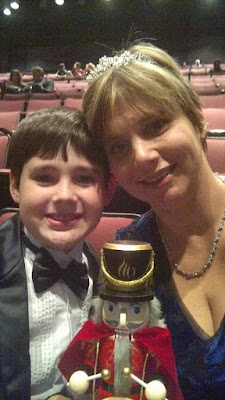 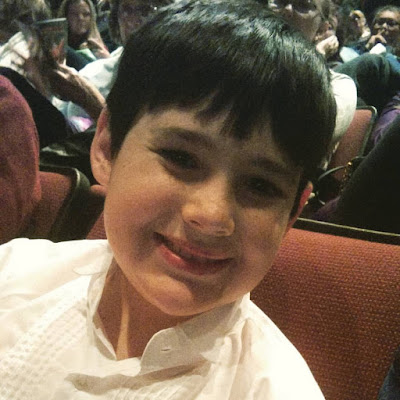 My leg is healing, thanks in large part to a homemade lotion brought to me by my Mom. Trying a new, all-natural product was a bit of a Hail Mary on my part, but I had exhausted everything in my amputee toolbox and was willing to give it a try. I wasn't overly optimistic that a lotion bar was going to make an impact but knowing that it wasn't going to hurt, I decided to lather up and give it a try. I couldn't believe it, As I was walking, I felt the improvement on my first step.

The lotion bar was precisely what I needed to alleviate the nagging friction problem on the back of my socket. Instead of rubbing my skin sore, my leg now glides smoothly with each step. Unlike other lotions and ointments that I tried (and trust me my medicine cabinet now looks like the skincare aisle at CVS), this formulation does not melt and pool to the bottom of my liner. I have to reapply twice during the day which is a minor inconvenience compared to the constant trouble I was experiencing for months.

I have been struggling with skin breakdown since September with the pain vacillating between nagging and nearly incapacitating. Being free of pain and of the need to constantly pause to readjust my leg and liner, has been liberating. I never would have imagined that a simple lotion bar would be my solution, but I sure am glad that my mom thought it was worth a try!
at 6:22 AM No comments:

The beginning of the week has not progressed as anticipated. I was planning on a week of holiday fun as we led up to the last day of school celebration. Instead of surprising Robby's class with baked surprises, I've been delivering water and medicine to his bedroom. It has been impossible to feel festive when there is a sick kiddo in the house.

I've tried to keep Robby quarantined to keep his nasty cough from spreading through the family, but my efforts seemed to have served only as a challenge for Timmy. He dashed down the hallway at every opportunity, frantically banging on his brother's bedroom door. I tried to explain that big brother isn't feeling well and needs to nap, but my determined toddler wouldn't sway from his mission. He knew his brother was home, and he wanted to play.

The unseasonably warm temperatures have been a blessing, allowing Timmy and I to escape outside while Robby slept. (I quickly realized that the lure of going outside to play trumps trying to harass his big brother.) Instead of baking and decorating for the holidays I have been swinging, kicking the ball and exploring the woods with Timmy. Not exactly Christmas activities, but I managed to keep Timmy occupied while Robby recovered so I will consider it a victory.

After a few days of rest and lots of spoiling, I think Robby is well enough to return to school today. Hopefully he can enjoy the last few days with his friends before his vacation begins. Back to cookie baking!

Vowing to maintain a semblance of a schedule, a few weeks ago Dave and I recorded another podcast. We were rather boastful with our accomplishment of recording on time, even congratulating ourselves for a job well done before disconnecting the call. I promised to upload the recording in a day or two so that we could maintain our newly adopted schedule.

Despite my best intentions, the recording sat idle in my computer cloud for two weeks. I tried to upload it once but met with some technical glitches which frustrated me to the point of angrily logging off the computer. I've been meaning to return to complete the upload but seemed to get distracted every time I remembered.

Finally, after two weeks of frequently remembering but never doing, the file is uploaded. This episode of Amp'd was inspired by a recent (well, now it isn't quite breaking news) story concerning a Paralympic athlete's request for a handicapped bus pass. This irony led Dave and I into a meandering path where we evaluated the odd hypocrisies that we both assume concerning the acceptance of disability "perks."

Sunday morning we dressed in nice (unstained) clothes and went to the much anticipated brunch with Santa. Robby was looking forward to the all-you-can eat buffet, promising that he was going to eat for hours to "get our money's worth." We were a little nervous about taking Timmy into a restaurant. The last time we took him out to eat, he shrieked in the high chair and threw food at everything in reach. I ended up getting my food to go and sitting in the car with an angry toddler while Scott and Robby wolfed down their meals. We drove home frazzled with the promise that he would not set foot in a restaurant until he was 18.

We decided to make an exception to our self-imposed exile because this event was geared for children. I was hoping that Timmy would be amused being in a dining room filled with excited children and that the setting would be more relaxed. When we walked into the waiting area and were met by a maitre d' wearing a full tuxedo, my anxiety began to rise. The ballroom was decked out with fine linens, full table settings and stemmed glass wear.  Little girls were proudly twirling in their sparkling Christmas dresses and boys were awkwardly wearing their best suits. I took one look at my ragamuffin clan and knew that we were under-dressed.

After being seated at our table, Robby asked the waiter if he could have a paper napkin because he had the sniffles and didn't want to "get boogers on the good cloth one." After being reassured that it was okay to use the cloth napkin, Robby eagerly declared that it was "time to get our money's worth and eat like a man." He took off to conquer the buffet while I fumbled to try to push everything out of Hamlet's reach on the table.

Unfortunately, it didn't take Timmy long to figure out pulling the tablecloth expedited his efforts to grab the forbidden items. Pulling the beautifully set table settings dangerously close to smashing on the floor, we ended up moving Timmy's high chair out of reach. He was not happy being exiled and began to squawk like an angry chicken.

Timmy was bribed into silence with a steady stream of cantaloupe. Robby accumulated a small tower of plates from his visits to the buffet and Scott seemed to relax. Everything was going well, until the jingle bells began to ring.

Santa came into the ballroom sending the children into cheers.  Well, all of the children except Timmy, who began to scream. He became so scared that he projectile vomited, thoroughly dousing the fancy table linens and the elf who happened to be standing in the path. Disgusted and probably fearful that he would be next, Santa practically threw the presents to Robby and Timmy as he hurried past our table. Timmy took the opportunity to throw his package back at Santa, hitting him squarely on his back.

Our photo opportunity with Santa didn't fare any better.  As anticipated by his previous response, Timmy melted down. It took both Scott and Robby to wrangle him to stand close enough for a picture. We are all a little worried that Timmy's demonstration  might land him on the naughty list. 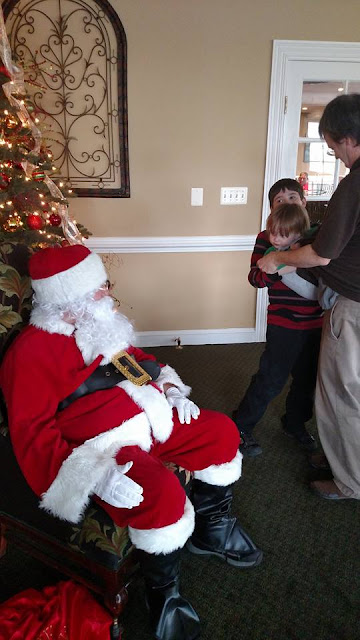