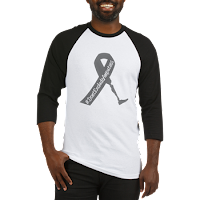 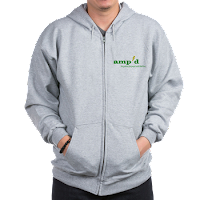 Dave and I have invested a great deal of time into our podcast website. Between researching, developing tools, promoting and recording the podcasts, we are each dedicated to making ampdpod.com a site that is reflective of our passions for helping the community. The term "labor of love" has never been more apt.  We are excited and driven by the prospect of bringing our collective vision to fruition.

The most dramatic changes have occurred in the Toolkit section of ampdpod.com, where we divided our resources by type and added a unique "Community" section. In addition to the e-cards and coloring sheets, we are now hosting a store featuring the official #DontExcludeAmputees ribbon and amp'd logo. The e-cards have been converted to traditional greeting cards. With the advent of e-mail, receiving snail mail has become a treat.

Although we just launched 6 weeks ago, our website has gone through numerous updates. We purposefully created the platform to be fluid so that we could remain relevant to the issues facing the community. If you haven't checked it out recently, I encourage you to do so. And please subscribe to our newsletter so that you can stay apprised of the latest news and activism updates.  As health care reform takes center stage, increased activism is going to become paramount to securing access to prosthetic devices. 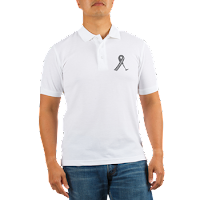 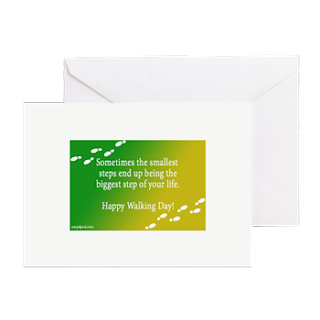 Yesterday was definitely not my best day. Both boys seemed to go out of their way to find new and vexing ways to get into trouble. Robby was so snarky and disrespectful on the way to school that he was sentenced to hard labor and the removal of all electronics for the week. I was so upset that his crocodile tears and pleas for mercy held no effect.

It isn't often that Robby earns a punishment, but when he does we tend to prefer a combination of extra (often unsavory) chores with the removal of all electronic devices. Of course, the fact that he was loaded with chores left little time to actually miss the computer. I'm hoping that coming down both swift and firm will thwart further deviations into the realm of parental disrespect.  I know that he is a preteen and testing the limits, but understanding the normalcy of his behavior does not condone it. Just as he feels compelled to push the boundaries, we have to double down on our rules.  Let's face it, sometimes being a parent isn't fun!

I hate punishing Robby and it is hard, even when I know that it is for his benefit. I really miss my sweet little Koopa. The little boy who used to hold my hand, look up at me with bright brown eyes and proclaim that I was his best buddy has been replaced with an all-knowing and sarcastic preteen.  I am not relishing this change.

Timmy pushed my buttons on a completely different level. He has been going through the "I don't want to wear clothes" phase, stripping down naked at the every opportunity. Trying to dress him has become a struggle reminiscent of the World Wrestling Federation. He may be little, but my goodness he is strong!

I became so weary of his throwing toys that I dumped my extra blankets out the chest and taped frowny faces all over it. Every time Timmy threw a toy I picked it up and put it into the "naughty box." I am hoping that he quickly figures out that throwing toys results in his losing them. In the meantime, it was certainly easy cleaning up last night because just about everything was conveniently stowed in the chest.

I'm hoping that today is a better parenting experience because yesterday left me diminished and doubtful. I want to be the nice Mom again, not the stern disciplinarian. While I know that both sides must balance, I really prefer having fun with my kids instead of spending time devising and overseeing punishments.
at 6:49 AM No comments:

Yesterday we had a nice, albeit low key, Valentine's Day. After our weekend adventure Scott and I struck an agreement for a minimalist holiday this year. I gave him a pound of personalized M&M's and made a nice family dinner.  He surprised me with a bouquet of flowers and did the dishes. At this stage in our relationship, sometimes true romance is expressed through housework and division of family chores.

Robby had a great day at school. He ended up exchanging emoji pillows with a friend "who happens to be a girl but please don't think that she is my girlfriend." It was actually cute because both friends wanted to buy a gift for each other and ended up choosing the exact same.  I topped off the school day by surprising his class with milkshakes, elevating him to hero.

Timmy seemed to enjoy the excitement of the holiday, but he loves most things. I brought him some new Thomas the Train books so he spent the majority of the day hugging them and paging through the pictures. He still won't sit down to listen to me read, but he no longer tries to chew on the books so we are considering that progress!

I hope that everybody had a wonderful Valentine's Day, filled with whatever level of celebration you desired.
at 7:05 AM No comments:

Although we all had a great time on our mini weekend getaway, I knew that the experience had been tempered because of the limited number of pools available at the water park. He never complained, but I could tell that Robby was disappointed that he couldn't scale the aquatic obstacle course and splash in the wave pools, both experiences that he had been eagerly anticipating since researching the resort on the internet.  Sunday night I sent a quick email to Great Wolf Lodge, conveying our disappointment that the two main pools were closed during our stay. I was expecting a canned response and certainly was not anticipating what happened yesterday.

Yesterday afternoon the manager from the resort called me and offered an apology for the closed pools. While I knew that she was not personally at fault, it was refreshing to have a company respond to feedback and concerns.  I was flabbergasted when she invited our family back to the resort as their guests so that we can have the full experience.  My reasons for reaching out to them were not to obtain anything for free, but merely to convey our disappointment and concerns that both main pools were closed simultaneously.

It is awesome when a company actually honors its customers. In these days of endless telephone trees and robotic messages, proper customer service has become a rarity that sets a company apart from all others. I appreciate the time that the manager of Great Wolf Lodge took in reaching out and talking with me, and I am excited to accept her offer of another stay. It was certainly not expected, but the gesture is very much appreciated.
at 6:01 AM No comments:

We had an awesome mini-getaway at Great Wolf Lodge.  While we did run into some frustrations (broken keys, pool closures etc.), we didn't let the inconveniences ruin our time. With the friend drama fresh in everybody's mind, Scott and I were highly cognizant of splitting our attention between Robby and Timmy so that each child could enjoy the activities. Of course that meant that we didn't see each other often, but that was not the purpose of this vacation. This getaway was about having fun with the kids, and we succeeded in our mission.

Timmy loved the splash park and was content playing in the knee deep water. He slid a few times, but seemed particularly taken with the water squirters.  Scott took the lead with Timmy at the Water Park, leaving me to become slide buddy for Rob.  I used to love water slides, but these were fast and reminiscent of roller coasters.  I think I need to pack some Dramamine before our next excursion.

After splishing and splashing for a few hours we went back to our hotel room. Timmy fell sound asleep almost as soon as he was changed into his pajamas. After eating dinner Scott stayed in the room with sleeping Hamlet while Robby and I went off to conquer the Magical Quest.

The game was clever and engaging. We bought a magic wand, and of course we then had to pay for activation for the game (because a resort will always charge you as much as possible.) After we were wanded up, Robby and I began our magical quest. After one hour (and 7,000 steps) we were ready to fight the final boss: the dreaded red dragon.  It was a tight battle, but Robby came up victorious!  We headed to the arcade to celebrate his victory, apparently the celebratory method of all great magicians.

Yesterday morning we woke up early (thanks to Timmy) and headed out to breakfast. After eating we went back to the pool, where we pretty much repeated everything from the day before. A few hours later we were drenched, exhausted and ready to head home. Timmy promptly fell asleep in the car, smiling in his sleep and awaking about 30 minutes from home.

We managed to cram a lot of family memories into a 24 hour period. I think the drama of the friend rebuffs faded away as we were able to making spending time with his parents cool. Scott planned an awesome surprise adventure for us! 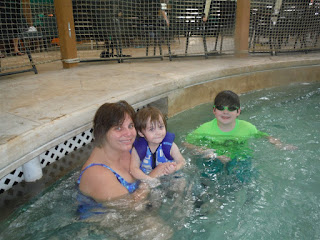 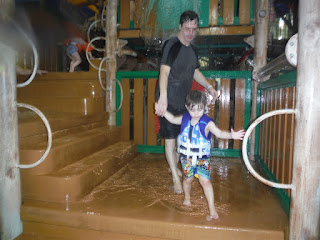 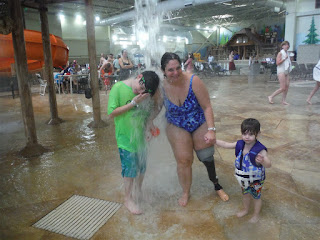 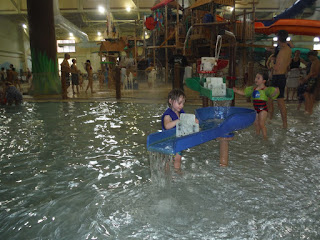 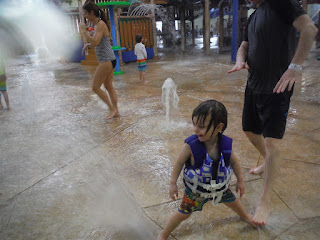 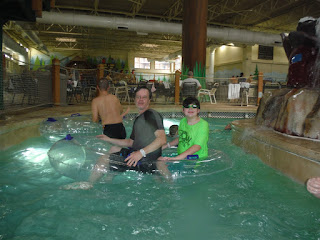 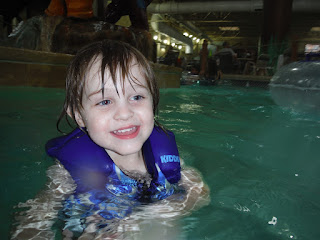 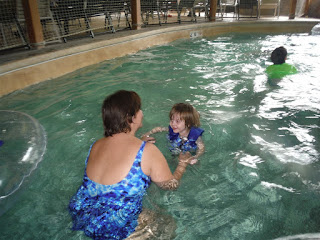 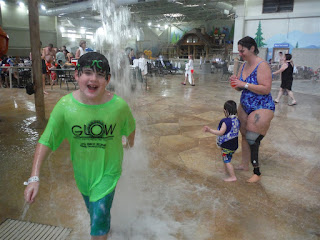 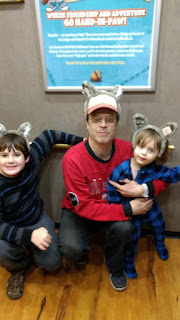 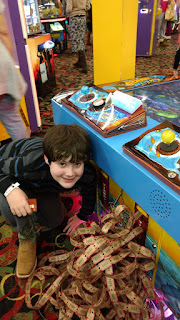 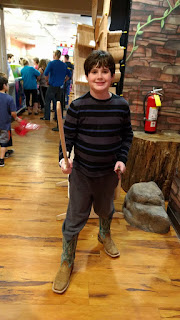 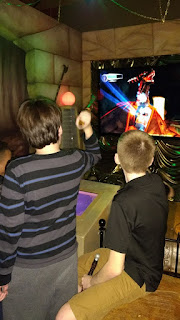 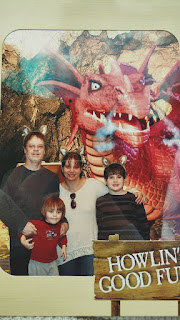