Last night I kept dreaming about my Dad. The dreams were so vivid that I woke up several times in the middle of the night. Each time I had to remind myself that he is gone. I am sure that the influx of dreams is because we are approaching the third anniversary without him on Saturday. It is hard to believe that it has been three years.

When I think about the past three years I feel sad and angry.  My Dad will never watch Timmy grow up, never heard his first word and will never see his radiant smile when he hears a train whistle. He missed hearing about Robby's sea turtle adventures and seeing the art that he is now creating in school.  I miss talking to him about my professional aspirations and dreams. He missed out on so much!

I try to keep my Dad's memory alive through stories, which Robby and my niece and nephews relish. Almost every time the Cousin Crew is together they beg to hear more Candy Papaw stories. The Crew happily listen to the same stories again when I can't think of a new one to share. I hate that there will be no more stories!

No doubt that the next 48 hours will be emotional, but I'm going to do my best to keep everything in check. I don't want to wallow in the grief. The best way to honor my Dad is to have fun with my kids, so that is what I'll do.

I venture to guess that I enjoyed our snow almost as much as the boys. Timmy was gobsmacked when he woke up to discover our yard was transformed into a winter wonderland. With the flakes falling hard and piling quickly, he couldn't wait to suit up and head outside.  Robby was nearly as excited, although he woke up several hours after his brother. (On a side note, the sleeping patterns of my boys could not be more opposite. Robby is a night owl and sleeps in late whereas Timmy crashes early but rises before the sun.)

Getting dressed for the snow we discovered that Robby's existing snow pants no longer fit. He must have grown at least three sizes since last winter. I knew that he would be doing more rolling around and sledding than me so I offered him mine. Somehow time played a trick on me because I can't believe that my little Koopa fits into my snowsuit!

Robby grabbed his new sled board and was off to play with his friend up the street as soon as he was dressed. Timmy was content to dig, roll around, sled and throw snowballs in our yard. He loved every moment. I hope I always remember the squeals of delight and his nonstop giggling as we played in the snow for hours. It might have been frigid outside, but seeing him so happy warmed my heart.

The only time Timmy stopped giggling was when we forced him to come inside to dry out and warm up. He breaks out in hives from the cold and I wanted to thwart an issue before it started. Our little snow monster was quite vocal each time I carried him inside. He was quick to calm down as he sat by the fire with his Daddy, watched cartoons and ate potato chips.

Pulling a preschooler through the yard and up hills is laborious under the best circumstances. I figured I achieved a significant work-out yesterday because every muscle is sore this morning.  Timmy, of course, is already begging to go back outside. 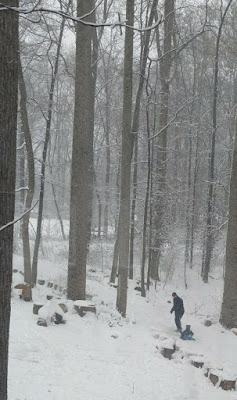 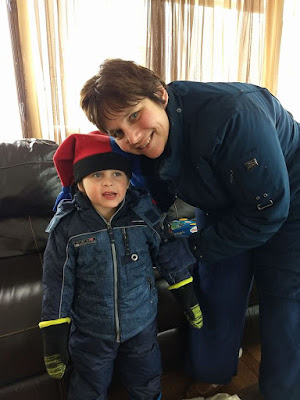 Happy Spring!  (Well, at least that is what the calendar says.) Outside our yard is carpeted in several inches of thick, white snow. Schools are cancelled (again) and I am waking up this morning to two excited kiddos ready to play outside.

It may technically be Spring, but this is the most impressive snowfall that we have experienced in years. Robby is delighted to finally be able to play the snowboard sled that he received for Christmas. Timmy is excited to stuff as much of the white stuff into his mouth as possible.  He may be cold tonight, but at least he will be well hydrated.

I'm grateful that the storm brought relief for my phantom pain. The phantom warnings for this snowstorm were intense. I'm curious to see if the intensity is related to the snowfall totals or due to the wild fluctuations in weather systems.
at 7:28 AM No comments:

My phantom pain has been off the charts lately. I'm fine during the day, but at nighttime the electric shocks and toenail twisting sensations return with a vengeance. Sunday night the pain was so intense that I ended up on the couch, crying frustrated tears because I couldn't find relief. Last night was not any better. Despite me taking something to help me sleep, between my pain and Timmy I only slept four hours.

Although I am continuing to feel the fatigue from the concussion, sleeping has been nearly impossible. I've been running on fumes for the past few days, and I feel like I'm going to crash soon. I find myself fighting to keep my emotions in check, especially with Timmy.

Okay, perhaps I need to confess something. To be honest, every male in this house right now is driving me to my wits end. I love my children dearly, but this is one of those days I just look at them and wonder where I went so wrong! Timmy wreaks havoc at every opportunity and Robby seems perfectly comfortable sitting on his perch by the computer squawking requests for snacks. I'm not a jungle gym, nor am I a maid!

Today our warm weather is supposed to take a wicked wintery turn, which is probably the cause of my sudden phantom issues. Yesterday Timmy and I spent the afternoon playing outside and riding our bikes. Tonight and tomorrow we are expecting up to 8 inches of snow. Whenever there are strong fluctuations in weather my not-so-phantom pain rears up.

I'm hoping that after the storm passes my leg will return to normal. Sometimes being an amputee just stinks!
at 9:43 AM No comments:

A few weeks ago Robby received some exciting news. He applied for an internship to learn how to look after and guide the sea turtle hatchlings on the Florida coast. He learned about the internship last summer when he went on the night "Turtle Trek" to watch the hatchlings emerge from their nest and waddle to the ocean. Ever since that experience, his love of sea turtles has grown to a new level. He was changed by the experience and has been talking (and dreaming) about assuming the role of Sea Turtle Rescue Intern.

He is over-the-moon with his acceptance, and we are delighted with his enthusiasm and excitement about his summer adventure. Although he is thrilled with the prospect of being an intern, he is understandably nervous about sleeping away from us for the week. I connected with the organizers and relayed his concerns. We were all relieved to learn that sleeping at the center was not a requirement. He will have a room at camp, but if he wants to stay with us at the hotel we can shuttle him back and forth. (I have a feeling that he will decide to stay once he becomes comfortable and makes new friends, but we aren't going to pressure the decision.)

As part of his internship, Robby is encouraged to fund raise for the organization. He decided that he wanted to kick-off the fundraising by designing and selling a t-shirt online. On Friday he went to a special session at his art studio and painted a mosaic of a sea turtle. Over the weekend we uploaded an image of the painting and created a shirt. If you would like to support his efforts, a shirt can be purchased here.

If you don't want a shirt, don't despair.  Other fundraising opportunities will be available soon! 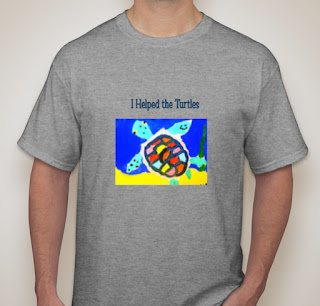