Several weeks ago I was struggling with self-loathing. It was right before Conference, and I was feeling fat, ugly and weak. Instead of beating myself up, I decided to do something about it. Well, I didn't exactly do something as much as I planned for doing something. I went onto Groupon and bought a voucher for six weeks of unlimited boot camp sessions. After my purchase I felt victorious, as if I had made an important first step. I celebrated my decision with a cupcake.

I managed to avoid redeeming the Groupon, citing end of the school year chaos and travel issues. I kept telling myself that July would be the perfect time to embark on my boot camp adventure. It is amazing how empowered I felt without actually working out! Simply knowing that I would begin, on an arbitrary date in the future change my life, made me feel strong and together.

Looking at the calendar earlier this week, I realized that July starts today. Yikes! All of a sudden the anxiety of my commitment enveloped me. Not one to walk away from a bargain, I redeemed the Groupon yesterday.

I tried to contain my composure as I prepared for my first boot camp class, but to be honest I was terrified. I haven't taken a proper exercise class in years, and the promise of sweat and work had me feeling overwhelmed. But I was also oddly excited to change my body and to become stronger.

There is no doubt about it, the class was difficult. I worked harder and sweated more than I ever have in the past. I was proud of myself for keeping up with my experienced, and able-bodied classmates. My moves weren't as smooth, my squats weren't as deep and my running wasn't as fast as my classmates, but I was there and I was definitely sweating.

Everything was okay until minute 28 of our 30 minute class. I was skipping and felt discomfort in my leg. I tried to walk and instantly knew that I had a problem. I removed my prosthesis and discovered the culprit. 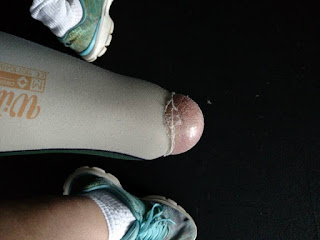 I completely wore through my liner! Without the cushioning provided, I was not able to continue walking let alone finish my work out. I was forced to abandon camp at minute 28 due to a prosthetic issue.

Sometimes being an amputee, dependent upon equipment working correctly in order to be mobile, simply stinks! I was frustrated that I had to quit class so close to the end. Truth be told, I was furious with my limb loss as I drove home. I felt discouraged by my equipment failure.

It took a new liner and a few hours before I felt better about the situation. I have never worked through a liner before, so yesterday was a milestone event for me. Assuming that I can coax my extraordinarily sore legs and bum to move me upright off the couch, I am going to tackle boot camp again. Wish me luck in my quest to reach minute 30!
at 7:03 AM 1 comment:

Scott and Robby are thoroughly enjoying summer vacation.  The boys have been sleeping in late and lounging through the morning.  (By "boys" I mean Scott and Robby. Timmy continues to be my little early bird, squawking in his crib at insanely early hours.)

Daily trips to the pool, followed by copious snack consumption before dinner, have allowed Robby and Timmy to burn off some excess energy during the afternoon. Scott has been staying home, enjoying some "alone" time in front of ESPN. Their nights have been spent staying up late watching TV (Shark Week), playing video games or running around the yard with Jack. The pair is definitely having a Norman Rockwell summer vacation.

Unfortunately, my summer has not been nearly as relaxing and enjoyable. Scott is home on vacation, but I am still working. In fact, with everybody home all day my work load has dramatically increased! They have only been home for two weeks, but I am already starting to feel summer vacation frustrations.

From laundry and dishes to toy clutter and the seemingly nonstop requests for assistance, I am constantly busy taking care of my little vacationers. Coupled with my two regular jobs, I am teetering on the brink. Something is going to have to change, because I refuse to become resentful and rundown.

Summer vacation isn't an excuse to acquiesce all responsibilities at the expense of others. I think the boys better buckle up, because they are both going to get a kick in the tail when they wake up. I want everybody to enjoy the summer months, including me!
at 7:18 AM No comments:

Yesterday was a much needed day of housework and rest. We made a significant dent in the laundry and my house is looking less like a tornado swept through it. I won't go so far as to say that it is tidy, but it is definitely presentable. At this time in my life, as I try to wrangle a curious toddler who is constantly in motion, presentable is a victory.

In the afternoon I managed to carve out some time to take the boys to the pool.  Timmy splished and splashed for in the baby pool for two hours, giddy and happy to be back in the water. Robby and Jack played in the "big" pool, trying to surf on boogie boards and sword fighting with noodles.

The pool was quiet, which allowed me to overhear Robby and Jack playing and talking. The topic of their conversation was, errr, unique at best. Without cause, Robby asked Jack why Minnie Mouse didn't have boobs. This query prompted a two hour long discussion as they tried to reason a logical answer. The lifeguard found the conversation wildly entertaining. I could see him chuckling and smiling from his perch atop of the boys.

Storms rolled in in the evening, which sent my leg into a a vicious phantom pain cycle. I went from feeling fantastic to fighting off flashes of phantom stinging. I don't recall ever experiencing such a sudden onset of phantom pain. Typically I am afforded the luxury of a steady increase of pain over time. I wonder if the intensity was so strong and quick because I was dehydrated from the sun and pool? In any case, my wonderful day became miserable as soon as the rain moved into our area.

It took me a long time to get comfortable, and even longer to fall asleep. Thankfully I am pain free this morning, although I am feeling anxious about experiencing the same phantom pain again today. I'm going to make sure to drink water when I'm outside with the boys. I'm really hoping that it was an isolated event and doesn't become part of my new normal.
at 7:11 AM No comments:

Timmy was ecstatic to be home, immediately running to the trampoline behind the house as soon as he was released from his car seat.  Robby didn't even make it down the driveway, insisting that we drop him off in the road as soon as he saw Jack.  I felt a sigh of relief as soon as I walked through my door, knowing that we had survived traveling with Timmy the Terrible.

To our fellow passengers, we sincerely apologize for Hamlet's raging tantrums. I tried everything at my disposal, from supplying a steady stream of french fries to talking like Donald Duck. Nothing placated him for more than a minute, and he quickly resumed his vocal outrage at being on a plane. If it brings any solace, your torment ended when the plane landed.  We had to suffer for another three hours as we drove through rush hour traffic home.

My little cherub is still sleeping, no doubt exhausted from yesterday's performance. Today will be spent doing laundry, cleaning and getting settled back home. I am sure that Robby will spend the day playing with Jack. I probably won't see him until mid afternoon, when the pair want a ride to the pool.  Despite the screaming and toddler stress, it is wonderful to be home!
at 7:41 AM No comments:

Today we are returning home!  It will be nice to be home and to return to normalcy after a week of being away. I know that Timmy has missed his toys and Robby has missed his friends and various electronics.  Even though I'm eager to walk into our home, stripping off my clothes and collapsing on our couch in my nightgown, I am dreading the process involved with reaching our final destination.

I am anxious about having to enter the belly of a plane with my little beast.  He was not a pleasant flyer last week, and I doubt that he has matured into the experience in a few days. I am expecting meltdowns and tantrums for the entirety of the flight. If he behaves, I'll be pleasantly surprised.

I feel badly about Hamlet's poor travel manners.  I can't help but think that somewhere nearby there are a hundred other individuals, preparing for their flights without any knowledge of the terror they will encounter. Little do they know that they will be treated to an Oscar worthy tantrum performed by an angry two year old.

Maybe he will surprise everybody and behave like a little cherub. Or perhaps he will sleep through the flight, waking only when we disembark. A Mom can always dream, right?