Yesterday was spent nursing Timmy back to health. Slowly but surely our little guy is starting to recover; it just isn't happening fast enough for me. His O2 stats rose from 83 on Wednesday to 88 yesterday afternoon. I'm hoping that he will be out of the "danger zone" by scoring in the 90's today. Until his O2 levels have normalized, I'm going to continue worrying.

Because Timmy has been so ill, I don't think that we are going to embark on any great adventures this weekend. Robby is testing for a new Taekwondo belt tonight and we were planning on having a family dinner at the hibachi steakhouse afterwards. Now those plans went out the window because one of us has to stay with little Hamlet. Thank goodness for Skype. Even though I won't be able to be at the studio, I'll be able to watch the belting ceremony in real time. Robby will have to settle for pizza and cupcakes at home instead of dinner out, but such is life.

On Saturday we were planning on attending the family picnic for his taeknowndo studio, but again we will have to divide and conquer. I'll make the cookies and stay with Timmy while Scott will take Robby to the picnic. Barring rain, I'm sure that they will have a good time. Hopefully Timmy will be feeling better and more energetic by then, because I sure do miss my happy little Hamlet!
at 6:09 AM No comments:

I knew that my little Timmy was sick as soon as I lifted him out of his crib yesterday morning. He was hot to touch and shivering while he was covered in sweat. Scott and I immediately decided that we were going to call the doctor as soon as the office opened. My poor little Hamlet has been through the medical ringer lately, and the high fever was extremely worrisome.

It was determined a few days ago that his hives are caused by an over reactive immune response. In order to treat the most recent outbreak which reared its spotted head while we were at Jellystone over the weekend, he was prescribed a high dose steroid treatment.  We were cautioned to keep him quasi-secluded during the treatment because his immune system will be compromised.  His being on immunosuppressant medication coupled with a high fever, I was frantic with worry.

The doctor agreed to see him, but I was cautioned that we were going to have to wait because she was booked solid. I packed my sweaty, weak little boy into his car seat and headed to the office. I was fully prepared to sit there all day. During the triage intake it was discovered that his O2 stats were low. After verifying the result with three separate machines, Timmy's visit was fast tracked to the doctor.  We were seen within minutes of his intake.

It turns out that my little guy has pneumonia in both lungs and strep throat. (He never does do anything halfway!) It is hard seeing him so sick, and while we are still worried, it is comforting to have a diagnosis and treatment plan. Hopefully his fever will break soon and my happy little Hamlet will return.  In the meantime, today will be filled with coaxing him to drink water while snuggling in front of the television to watch endless episodes of Zack and Quack.
at 4:37 AM No comments:


Monday afternoon I was trying to wrangle Timmy into the car and, when he wasn't going willingly, I was forced to pick him up. While juggling my car keys, cell phone and a planking toddler, I tried to meander through the yard to the driveway. I stepped into a divot and instantly knew I was going to fall.  Somehow I managed to put Timmy upright on the ground before fully losing my balance.

While I laid on the ground in pain as I was frantically trying to access the situation, Timmy took the opportunity to run around the yard. He gleefully tried to hug the large inflatable pumpkin, through a few sticks into the woods and waved to the airplanes as the flew overhead. When I saw him grab a baseball bat from the corner of the porch before barreling towards me, I realized that it was time to start moving. In that moment, I was fairly certain that the pain I was experiencing was only going to intensify if he reached me with the bat.

I am lucky that I didn't break anything when I fell. I tweaked my knee, but I think after a few days I'll be okay. In the meantime I'm trying to be cautious and not to overdo it. When I twist or bend suddenly I am reminded of my tumble, so I am trying to be as still as Timmy will allow.

I hate falling. The experience always reminds me of my own vulnerability. While intellectually I know that even my able-bodied friends would have lost their balance if they stepped into the hole, I can't help but feel susceptible to falling. I hate feeling weak!
at 7:06 AM No comments:

I am a creature of habit, especially in the morning. Each morning I make a cup of coffee, sit down on my loveseat and log onto my computer to check my email. I have come to enjoy my morning email fetch, primarily because I never know what to expect.  While most of the time my inbox is filled with advertisements and assorted cyber junk, on occasion I open a message which turns into a wonderful opportunity or adventure. Yesterday morning I opened one of these messages.

It turns out that the website The Mighty had decided to publish an article I wrote explaining the obstacles faced by the limb loss community because of insurance limitations. I was delighted for the opportunity to educate the general public about issues surrounding prosthetic parity. Because of the blatant absurdity of tenants such as "one limb per lifetime," I truly believe that change is within reach. But in order to force our elected officials to act on Federal Parity legislation, we need to rally not only the limb loss community but also our able-bodied peers. By embracing and creating opportunities to talk about insurance fairness, and through sharing real-life stories of individuals whose potential is limited by their insurance more than their limb loss, we will continue to make inroads towards effecting change.

Please read the article I authored, and take the opportunity on the website to click the heart button. I know that "hearts" and "shares" are actively tracked when evaluating the success of a topic on the website. I want to send a clear and strong message that ProstheticParity is an issue that deserves attention.
at 7:16 AM No comments:

This past weekend we packed up the cars, picked up Robby from school and began to drive south.  Nearly three hours later we arrived at Jellystone Natural Bridge for a weekend getaway. With a cabin directly adjacent to the fishing pond and an activity list heavy with Halloween festivities (including trick-or-treating), I knew that everybody was going to have a blast.  Because of the unseasonably warm weather, we were delighted to discover that the pools and splash zone were still open. Robby and Timmy could hardly wait to get changed into their swimming gear when we arrived.

Timmy, entranced by the splash zone, never made it to the pool. He was content running through the water fixtures and sliding down the pint sized water slide.  Robby opted to split his time between the regular pool, the corkscrew water slides and the splash zone. The weather was perfect allowing us to thoroughly enjoy our time.

Our weekend would have been perfect had it not been for an unexpected case of Timmy hives. He woke up on Saturday with a few pin prick spots on his cheeks.  As the day progressed, the spots spread and deepened in both size and color.  By the end of the day he was almost completely covered and, although he didn't seem bothered by the outbreak, other parents were starting to pull their children away from him. It broke my heart, but yet I understood the instinct to protect your own child.

Despite the hives and the worry that both Scott and I felt, the boys were able to participate in most of the campground activities.  Timmy decorated a pumpkin while Robby tackled painting a ceramic shark.  We made a tie-dye shirt and entered the costume contest.  In the evening I opted to keep Timmy cool and quiet in the cabin while Robby and Scott went trick-or-treating around the campground.  The pair dropped off a full bucket of candy before heading to the "Monster Mash Dance Party."

Sitting in the cabin with my little hive-covered Timmy sleeping, my mind began to worry. In the midst of a growing panic attack, Scott sent me a video of Robby dancing. Immediately I was transported from my woeful "I wonder if" mentality to the present, which made me smile.  My little Koopa has, unfortunately, inherited my dancing abilities. He has also inherited my enthusiasm. I'm not sure where he developed his confidence, but it was fully on display during the dance.

Sunday we woke up to discover Timmy's hives were improving. We went to breakfast and headed to the playground.  Timmy took a detour and ran straight into the splash zone.  He apparently missed the memo that the temperatures had drastically cooled overnight. He seemed perfectly content splashing in the cool air first thing in the morning. I just love watching him play!  Despite the hives, he is a happy little boy. 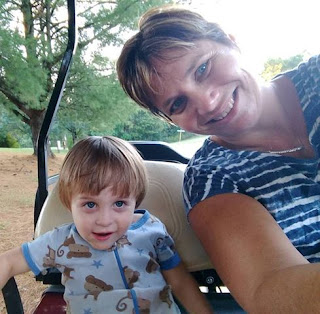 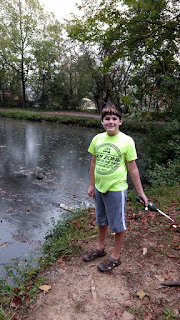 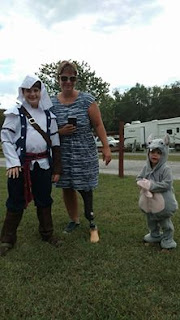 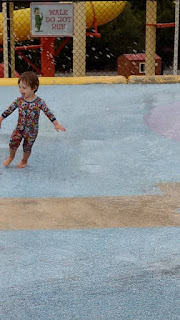 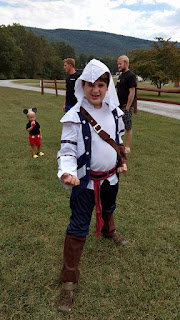 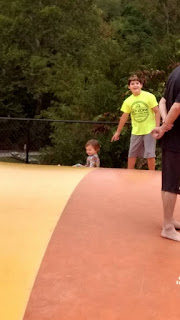 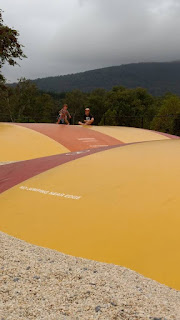 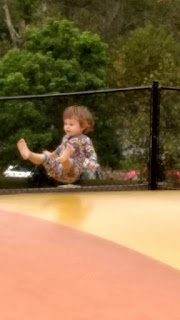