After an extremely long and exhausting day of traveling, we have finally arrived at Scott's mother's house. It took us nearly 8 hours, which is almost the same amount of time it would have taken if we had driven. So much for making our live easier by flying!

As anticipated, Timmy was a handful. He screamed on the plane for about 30 minutes. Despite my desperate attempts, there was nothing I could do to calm him. Holding an inconsolable baby in a public space is an incredibly helpless feeling.  Eventually he fell asleep and the glares from our fellow flyers transferred to another Mom with a crying tyke.

I expected little Hamlet to become a full-fledged explorer as soon as we arrived, and so far he hasn't let me down. I spent the afternoon and evening following him around and removing just about everything from his hands. While Scott takes full advantage of seeing his family this weekend, I'll be chasing Timmy around a home where items within his reach are both plentiful and tempting.  It's a good thing I brought my activity leg, because he is going to keep me on the move!
at 7:25 AM No comments:

We're packed up and ready for our annual pilgrimage to Ohio to visit Scott's family. While we are excited about seeing and visiting most of his family, the whole idea of this trip has left me overwhelmed with anxiety. In addition to being forced to face situations that I would prefer to avoid, I am worried about traveling with Timmy.

Hamlet does well traveling, in a car, for about 2 hour stretches. After that time he always breaks down and screams until he is released and allowed to run and play. By the time we finally arrive at my mother-in-law's home we would have been traveling for six hours. I'm hoping that the time at the airport will satisfy his desire to move, but I'm not convinced.

Once we arrive at her house, I am worried that a whole new bundle of issues will arise. Proudly displaying a lifetime of trinkets throughout her home, it is anything but baby proof. I am going to have to remain on my toes throughout the visit to spare not only her possessions but to also protect Timmy. Needless to say, I am anticipating much time to relax.

Wish us luck as we maneuver the airports and the highways today!

(I would be remiss if I didn't thank my sister for coming down to house sit. I know that her kids are going to have a great time splashing in the stream and ziplining in the yard. I have left a bag full of s'mores supplies on the counter, and an abundance of wood for the fire pit. I think that they are going to have fun hanging out here for a few days.)
at 6:29 AM No comments:

Yesterday was hot and the perfect day to play at the pool. As soon as we entered through the gates I heard screams of "Robby's here" from a small hoard of children. Needless to say, my little Koopa no longer needs me to entertain him in the pool.  He grabbed his satchel of pool toys, his turtle float and took off to join his friends.  He did emerge from the water on one occasion- when he wanted ice cream from the snack bar.

Timmy, on the other hand, was more than happy to take all of my attention.  Sitting in his little blue whale floaty, he thoroughly enjoyed playing in the water and watching his big brother splash with his friends. (Have I mentioned how much I adore his giggles?) After floating for about an hour, we moved to the baby pool where he could stand, sit and splash more.

Even though he hovered around the sides of the baby pool, he required my being by his side. Until he passes swim classes, which won't be for another few years, he will never be out of my reach at the pool. I enjoy playing with him in the float more than the baby pool, but seeing him happy trumps my desires to be fully submerged.

Standing in the baby pool for almost two hours, I took a lot of sun. Since I thoroughly applied sunscreen to everybody, I wasn't overly concerned about becoming burned. It wasn't until late last night that I realized I had an error in judgment.

In yesterday's blog I wrote about my newly discovered swimsuit confidence. This was the first year I opted for a traditional swim suit vs. a swim dress. Because I have worn swim dresses for at least 25 years, the skin on my upper thighs hasn't seen the rays of the sun since childhood.  This morning I am waking up with a golden tan, accented by two bright red swatches on my upper thighs.

Perhaps the universe is telling me that I shouldn't be confident in a swimsuit.

Although Scott and Robby went swimming almost daily last summer, I made it to the pool a total of three times. While they were having fun splashing in the sun, I was inside recovering from my surgeries while trying to take care of Timmy. Needless to say, it was a miserable summer.

This year is different because I am healthy and Timmy is old enough to come to the pool to play in the water. Planning to spend my afternoons at the pool everyday, I decided it was time to get a new swimsuit.  Typically swimsuit shopping is dreaded with the same intensity as my pelvic gyn exam, but this year was different. Perhaps it is because I am 41, or maybe it is because I'm a Mom to two and prefer utility over fashion, but I didn't shed a single tear picking out my swimsuit.

I quickly chose two swimsuits that both covered my body while allowing me to move and play with my kids. Standing in front of the mirrors, I felt the familiar internal criticism start to build. Instead of bowing to the negativity, I made the decision to change my thought process.

My husband thinks I'm sexy and my kids just want me to play with them in the pool. Nobody that really matters is judging my body,  so why spend so much time and mental energy trying to impress people whom I do not know. Additionally, and if I were to be completely honest, I've learned that nobody is ever looking at my body when I'm at the pool. All eyes are always drawn to my black carbon fiber prosthetic. I could probably walk around topless and nobody (with the exception of Scott) would notice! For once, the stares are liberating.

Once I fully embraced my new perspective and stopped the self-critiquing, I felt as if a weight lifted.  We spent the afternoon yesterday at the pool, and I love my new swimsuits. I feel both comfortable and confident. I might have jiggles and softer curves, but none of that matters when I'm playing and having fun with my kids.
at 7:23 AM No comments:

Well, our Summer of Awesome II kicked off with a bang. Unfortunately, it wasn't exactly the type of excitement we were anticipating. Instead of laughter and fun, we had a bolt of lightening strike two of our giant oak trees in our front yard. Our area experienced wicked storms on Saturday evening, and while we were expecting downed limbs and lots of debris, we were taken aback by the lightening strike.

We weren't home when the strike occurred, instead we were trying to drive home from the airport
after picking up my Mom. The torrential rain, strong winds and constant lightning made the driving difficult and the typically quick drive long. We didn't notice the tree damage until the next morning when the storm stopped and the sun came out. At first we weren't sure what happened to the tree, but Mr. Bill confirmed that he both saw and felt impact of the lightening strike on our trees.

Not only did the lightning damage our trees to the point where we will have to cut them down, but it also damaged several electronics inside our house. The random damage is confusing because we can't pinpoint the common variables between what was destroyed and what survived unscathed. The cable box in the living room, which was close to the lightning trees, remained fully operational while the one in our bedroom was fried. Our cordless phone base broke, as did the television in the kitchen.  Our internet modem/router was affected, rendering us without internet (the horror).

Yesterday was spent calling our home owners insurance, surveying the damages and trying to find a new modem/router so that we could get back online.  Internet was definitely the top priority, primarily because I work from home. We quickly discovered that the router we needed was not sold in stores, and would have to be ordered online for delivery on Wednesday. Scott was undeterred, took to Craigslist, and found a new router about 40 minutes away.

By yesterday evening we were back online, the cable box from the broken kitchen television was moved to the bedroom so that Robby could still watch cartoons, and our life was returning to normal.  We still don't have a house phone, but to be completely honest the quiet has been nice. (I didn't realize how often it rang until it was silenced.)  Hopefully this storm is not a predictor of the rest of our vacation, and that we can return to sun and fun. 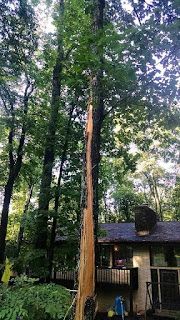 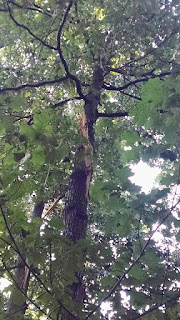 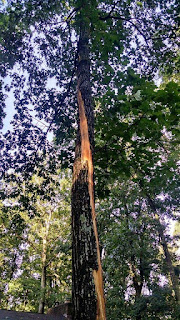