Today is a big day for me! I have been invited to provide testimony during a Congressional hearing about access to prosthetics. I feel like I have been working towards this moment for years, and I am both excited and terrified about the coming hours.

Three amputees have been asked to provide testimony during today's hearing. A representative from the Boston Marathon bombings, an individual who was injured during combat service, and me. Obviously, I am the token representative from the civilian amputee community.  We all have our own journey, but the reality of the other two speakers is not typical for an amputee in this country. While they have been provided with the best technology and rehabilitation, most amputees are struggling to scrape together the funds for the most basic of devices.

Almost every day I field emails from people from all over this country, desperate to get fitted with a prosthetic. Moms and Dads are relegated to living life in the sidelines, not because they lack intrinsic motivation to walk with a prosthesis but because they don't have the funds required to get one. I find myself far more disabled by my insurance policy than I am by the loss of my biological leg. I am both excited and honored to relay these stories in the hopes of starting a realistic dialog. I truly believe that it if the public knew of the real life struggles in the amputee community, change would result.

Despite being nervous, I am going to do my best to provide a true life depiction of the struggles of the "normal" amputee in this country.  I have committed hours of prep time to today's testimony. I know the issue and feel confident that I can speak accurately, passionately and effectively about the struggles faced by so many of my friends. I feel intimidated by the responsibility, but not by the audience. There was a time I would have been simultaneously awe struck and silenced by the prospect of presenting to an elected official. The gravity of this issue has erased any of these fears and has served to fuel my passion. I finally have an audience with clout, and I have no intention of being quieted without thoroughly depicting the hurdles encountered due to our lack of insurance parity.

Stay tuned as the AmputeeMommy takes on Congress!
at 5:20 AM No comments:

Yesterday evening I had the opportunity to speak as part of the ReelAbilities DC film festival. Although both leaving my house after dark and speaking to crowds are outside of my norm, I was excited about the opportunity. Who would have thought that I would be speaking at a film festival?

Watching the film, I struggled to figure out what I was going to say. Other than to talk about my story and reactions to the film, I was given little direction. As my thoughts swirled, I doubted that they really wanted to know my honest reaction.

When I heard the film narrator declare that amputees were becoming "super human" and would soon be the "envy of the able bodied world because of their technology," I knew I had to address the dirty little secrets behind these "miraculous" advancements. The majority of amputees struggle to access the most basic devices. The bionic devices demonstrated in the movie are completely unattainable.

I began my speech by introducing myself, but quickly parlayed into prosthetic parity. I discussed insurance issues and the real life struggles of the amputee community. The audience was flabbergasted when I revealed the price tags, and the 3 year longevity expectations, of the bionic devices featured.

I spoke about the one limb per lifetime caps in New York state, as well as the complete exclusions in Nevada and Alaska. I relayed stories of local families struggling to afford the copay for a leg for their 10 year old son, who is currently relegated to crawling because the family earns too much to get assistance yet doesn't make nearly enough to afford the 10,000 copay required for the device. When I revealed that I am disabled not by the loss of my limb but through the red tape of my insurance carrier, the auditorium erupted into applause.

I may not have delivered the speech the organizers were anticipating, but the audience was captivated. I could tell that the message was heard when a flurry of hands flew in the air when I offered to answer questions. My 10 minute speech turned into a 45 minute interactive presentation.

Driving home, I couldn't help but ponder the possibilities if the film makers had opted to make a realistic portrayal of limb loss issues. I realize that technology is glamorous, and is touted because it makes everybody feel better. But if the goal is to bring enlightenment, I think that the mark was missed.
at 5:46 AM 1 comment:

One Limb Per Life

Despite our best intentions, Dave (my podcast partner) and I have had a difficult time staying on track with Amp'd. I take full responsibility for the delay in recording and producing this episode. With my Dad being sick and ultimately passing away, I just didn't have the time or the energy to record.

Our absence is not reflective of a lack of passion. We still believe in our podcast and plan to use it as our springboard to discuss issues or to launch new ideas and concepts. Hopefully life will calm down and we can resume a recording schedule.

Last week we both made recording a new episode a priority, primarily because we feel passionately about the topic. The policy offered through the New York insurance exchange has a one limb PER LIFETIME cap. We discussed the history of this policy, and Dave aptly explains how this seemingly archaic insurance option made it to the Affordable Care Act exchange in the state.

Learning about the issues is the first step towards change.  Please take some time to listen to this recording, and to sign the petitions. Become involved. It is clear we have to advocate for ourselves.

Last night, Scott and I were glued to the television as we watched the nonstop coverage of the Baltimore riots. Despite the constant stream of images and reports, I still can't fathom the destruction that unfolded. We are 90 minutes from Baltimore, yet it feels deeply personal. I used to live in that city and still have friends who reside there.  Between doctor visits and the aquarium, we visit several times a year and have always felt comfortable. The scenes we saw on television last night were heartbreaking.

I realize I'm jumping on the "what's wrong with people" bandwagon, but I don't understand looting and random destruction. If the purpose of the protesters is to gain media attention, I suppose that they are successful. However, if they are hoping to create a dialog about police brutality, their talking points are muted by the violence.  Perhaps I am showing my age, but protesting police brutality by performing random acts of violence feels wholly illogical.  Logic, of course, is of no consequence when a group mentality is at play.

I felt scared for everybody who lives and works in Baltimore. I can't imagine the terror felt by the residents and business owners last night as they faced the reality that they could be victimized at any moment. This is becoming a crazy world, and it makes me fearful for my boys.

While I'm confident that we are protected from this protest by geography, I worry about the future. I hope that my boys will have enough common sense and self-worth to avoid putting themselves in the situations I saw playing out last night. It is hard to go against a crowd, and I can only hope that they are being raised so that they have the ability to walk away instead of participating.  Moments like this I want to keep them little forever.
at 5:54 AM No comments:

Although the weather on Saturday was less than ideal, I think that Timmy thoroughly enjoyed his party. He was grinning from ear to ear watching his cousins play around him, occupied by the commotion that always ensues when so many little kids get together at one time. I know that soon he will be chomping at the bit to keep up with them, but on Saturday he was content just to watch.

Sunday the weather was far nicer, allowing us to spend most of the day outside.  Robby and I rode bikes (with me towing Timmy in his bike buggy) while Scott tried to make heads or tails out of the directions for the swing set.  (For such a large swing set, the boxes are ominously small.)  Robby rode over to Mr. Bill's house to request assistance, but failed to return home.

Unfortunately for the swing set construction project, but happily for Robby, Mr. Bill was occupied and couldn't help. He was already working on a project that he and Robby have been planning since Halloween. During one of their after school chats, the friends decided to become pumpkin farmers. They carefully saved all of the seeds from their Halloween pumpkins in anticipation of planting. They are hoping to grow enough pumpkins to be able to sell them at the end of our development.  "It's like money growing out of the ground" seems to be their pumpkin farming mantra.

Together, the pair dug, hoed and planted probably 100 pumpkin seeds. I don't know if they will grow, but if the crop fails it will not be due to a lack of effort. Who knows, maybe we will be rolling in pumpkins this fall.

Later this week Mr. Bill has promised to come over and help us make sense out of the swing set. It is just a simple A-frame, but the number of pieces that need to be fit together is intimidating. Since this is something that our boys will use on a regular basis, we are happy to accept help from our resident expert.  Besides, it is going to be awhile before the pumpkin patch needs work and we like to keep Mr. Bill busy. 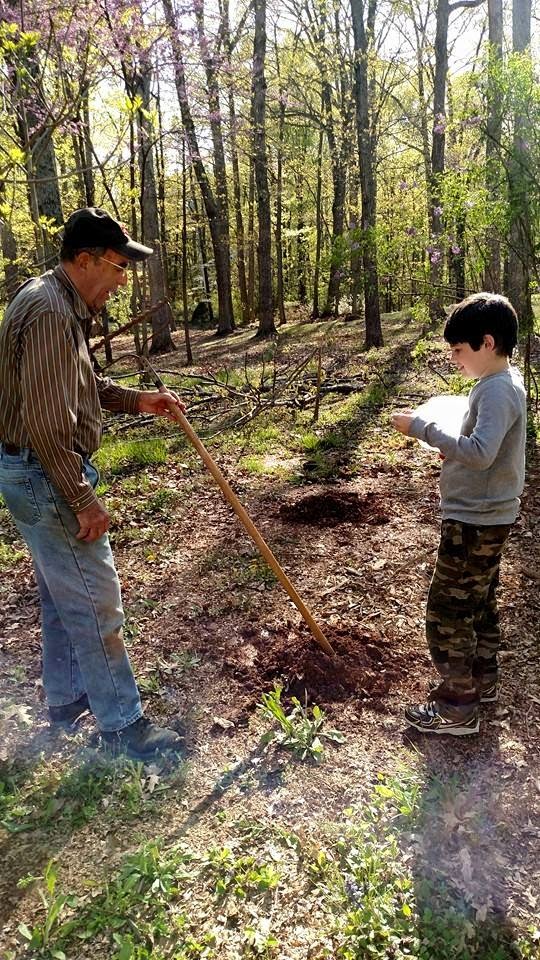 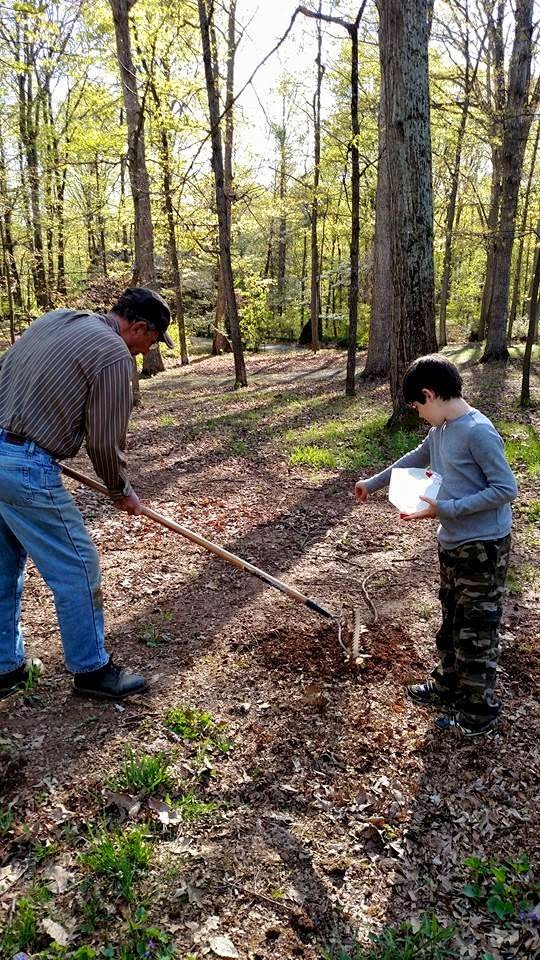 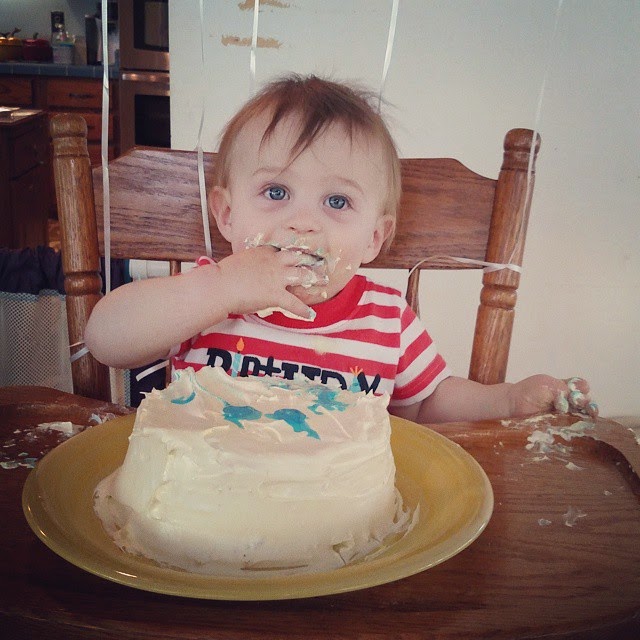