Yesterday morning Scott and I were chatting on the couch while Timmy was sitting in his bean bag chair watching Team Umizoomi. All of a sudden my little Hamlet jumped up and threw Puppy Blanket across the room as he began sprinting and squealing with delight. It was as if we were reliving the chaos from Wednesday evening when he morphed into a little destructive tornado. Scott and I both struggled to wrangle and restrain him until he was calm.

During the commotion Robby emerged from his bedroom. He calmly sat on the couch and watched as we fought to keep Timmy from destroying the house. Without much fanfare, Robby flipped the television channel and Timmy calmed down. Robby looked at us, smiled and changed the situation with his observation.  "Momom, Timmy was running around the house like the Gizmo on Team Umizoomi. They were running through the mall making a mess, and that is what he was doing in the house."

Scott and I were flabbergasted with the correlation that Robby revealed. Yes! Every night when Timmy goes wild we had been watching his favorite episode of Team Umizoomi. The little robots in his favorite episode had their buttons flipped from "Make Clean" to "Make Mess" and were wreaking chaos everywhere. Timmy hasn't been trying to be naughty or destructive. Instead, he was mimicking the cartoon characters.  Talk about a light bulb moment!

Timmy was well-behaved for the rest of the day. He didn't meltdown, and he didn't turn into a destructive little demon. It turns out that he is just susceptible to cartoon peer pressure. Upon this realization, Scott immediately deleted the episode from our DVR. Hopefully the "Make Mess" monster has also been erased.
at 5:50 AM No comments:

For the second time in as many weeks, last night I went to bed knowing that I had been defeated by a toddler. My sweet little Hamlet burned into a tornado of destruction in the blink of an eye. One moment he was happily playing with his toy kitchen, whipping up and proudly serving me delightful plastic concoctions. In the blink of an eye, and seemingly without cause, I saw the twinkle of mischief in his eye and he started sprinting through the house like a wrecking ball.

He ran with his arms extended so that he could sweep and knock over anything and everything in his path. Giggling, he seemed to be on a mission to cause as much destruction as possible before being caught.  When we finally snagged him (he can duck and turn quicker than the most seasoned boxer), my little terror showed no remorse. He only laughed in our faces as we sequestered him to his room.

Usually he hates to be confined to his bedroom. Last night he took his punishment as a challenge. He completely destroyed his bedroom within minutes, knocking over his bins and stacking his wipes only so he could knock them down as soon as I opened the door.

I was completely at the end of my rope. Not knowing what I could do that would make an impact, I did the only thing that came to mind. I took his beloved Puppy Blanket and threw him out the window. The look on Timmy's face as he watched his beloved companion flying through the air only to land on top of the SUV in the driveway was one of devastation. With one single act I managed to break the cyclone of toddler destruction.

Usually I would feel badly about doing something to cause emotional distress. This time I felt victorious instead of remorseful. I finally found my bargaining chip with Timmy. When he misbehaves, he will lose Puppy Blanket. Hopefully I won't have to take the blanket often because I really don't enjoy being a mean Momom. 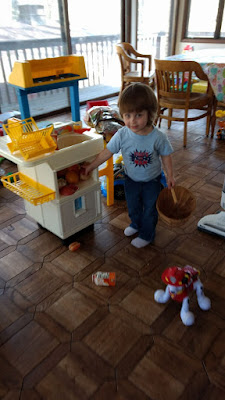 Scott and I are especially bad at judging measurements and amounts. When it comes to deciding how much grass seed we need, how many yards of mulch would be appropriate for our flowerbeds and how many cords of wood will be needed to get us through the winter, we can't figure it out and end up guessing. (Just a hint if you ever find yourself deciding how much wood you may need to get through the winter. A cord of wood is a lot! I know this because two winters ago we ordered three cords to be delivered. It's still stacked in the driveway.)

Yesterday we accepted an obscene amount of mulch, another order based upon nothing more than a due a guesstimate and a quest for free delivery. Apparently the landscape store's offer to deliver 10 square yards of mulch wasn't an arbitrary decision. They deliver 10 yards because it is a lot of mulch. How do I know this? Because it's piled next to the wood pile that continues to mock us by standing tall and never seeming to diminish.

Scott and Robby worked throughout the afternoon scooping, schlepping and spreading the mulch through our flowerbeds and around the house. Despite three of the four beds being completely coated with a four inch blanket of mulch, we barely made a dent on imposing shredded wood mountain. Looking at the pile from the house, I'm fairly certain that it will be years before we regain complete access to our driveway.

The boys will continue to tackle the mountain today. I know that it won't be completely dispersed this week, but it will be nice to have everything mulched at the same time. When we're done, I might invite the neighbors to a fire pit party. It will be nice to sit and enjoy the freshly landscaped yard on a cool spring evening. I might even give out wheelbarrows of mulch as party favors!
at 7:09 AM No comments:

The amp'd Amputee Bill of Rights


A few weeks ago Dave and I were approached with the challenge to create a Bill of Rights for the limb loss community. At first the task felt overwhelming, and my immediate instinct was to wait to tackle the project. Then a few hours passed, and I found my mind continually returning to the challenge. Instead of feeling overwhelmed, I began to feel excited about being part of creating such a unique document.  My feeling unprepared and ill-equipped slowly started to fade as I embraced the possibility that I am capable.  By the time the day was over I was chomping at the bit to get started.

Pondering what I consider to be a right for every member of the limb loss community turned out to be a fascinating exercise of self-evaluation and reflection. What do I believe, and for what am I willing to fight to maintain or achieve? I was forced to pare down large concepts into firm beliefs, chipping away at the details until I had a solid foundation. I learned a lot about myself and my allegiance with the amputee community through this experience.

The process was laborious and deliberate. Dave and I separately created our own ten rights, exchanging lists only after we were complete.  We then worked to merge and create a master list of 15 rights. We released the draft to the community and invited input and suggestions. Friday night he and I spent hours on the phone, pouring over the suggestions we received in an attempt to create a solid, all-encompassing document.  Throughout the process it was imperative that the Bill of Rights be a crowd-source created document, and we were delighted with the response from the community.

After countless hours of reflection, discussion, writing (and rewriting), planning and organizing, yesterday we released the final amp'd Amputee Bill of Rights. This document details the 15 solid principles that we believe every individual living with limb loss should be afforded. A project which initially rendered me overwhelmed has left me feeling empowered and strengthened. I have no doubt that I will be a better activist because of this challenge. I now know, without hesitation, what I believe to be a right of every individual within the limb loss community. 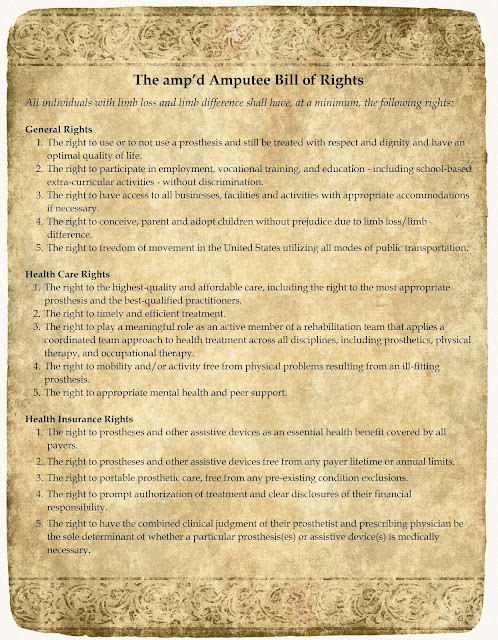 Today marks the first official day of Spring Break 2017, or as Scott coined SB #23 (because this is his 23rd year teaching).  Unlike the past few years, it seems that the weather is going to cooperate with a forecast of bright skies and warm temperatures. It will be nice to be able to spend time outside, enjoying the sunshine while getting the yard readied for summer. At least, that is how I framed it when I broke the yard work news to the boys.

Of course, neither Scott nor Robby are particularly ecstatic about my slipping yard work into the plans. The pair have been looking forward to spending the week watching television, eating snacks in bed and playing computer games wearing nothing but their underwear.  Yesterday I ruined their underwear-only initiative by insisting that they put on pants so that we could all go outside for awhile.  After a lovely bike ride through the neighborhood with a happy Hamlet in tow, I ruined Robby and Scott's lazy day aspirations by requesting help picking up sticks.

It wasn't long before they realized that this Spring Break was not going to be a gluttonous electronic binging fest. I'm pretty sure I'm going to be elevated to public enemy number one when the 10 cubic yards of mulch is delivered on Tuesday. I'm not going to be a complete tyrant about working during vacation, but I am going to make sure that at least a chunk gets crossed off of our family to-do list!