After a fun-filled getaway to my Mom's house, we are now back in VA. It is always hard to leave, but I know it won't take long to get resettled at home. School (cyber) starts again in a few weeks and we have a lot to do before the curriculum opens.

Today will be laid back as everybody settles back in Virginia. I have a lot of laundry to catch up on, and the house is in desperate need of a cleaning. I suspect that both boys will be busy playing with their computers and various toys. As much as they like visiting Nana and their cousins, it is always nice to be home again.

All good things must come to an end, including our :quarication." Spending time with my Mom for the past week and a half has been wonderful and exactly what my soul needed to rejuvenate before cyber school begins. Robby and Timmy loved playing with their cousins. Although our adventures were more limited this year, I know that they made strong memories to last.

Yesterday was a day full of appointments and back to school prep. While my Mom took my youngest nephew to the dentist, Tiffany and Jacob went to meet with their new guidance counselors. They both came home elated with their new schedules and a palpable enthusiasm for their new school adventure.

In the evening I took the Crew to the mall (socially distanced) to buy some new school clothes. Thankfully they all love the styles and colors at Hollister (a store that is apparently catered to the modern teen). It certainly made shopping easy!  Three full shopping bags later, their school clothes shopping was complete.

To finish off our quarication, I held an epic game night with the Cousin Crew. We stayed up late playing various card, trivia and truth or dare games. Eventually I lost steam and went to bed, but by looking at the house this morning the Crew pulled an all-nighter. All of the chip bags are empty, water glasses are all over the house and the living room is a mess.

After everybody restores my Mom's house to its pre-visit state, I'll be packing up and heading home. Leaving is always sad, but I also know it is time to get back to reality. 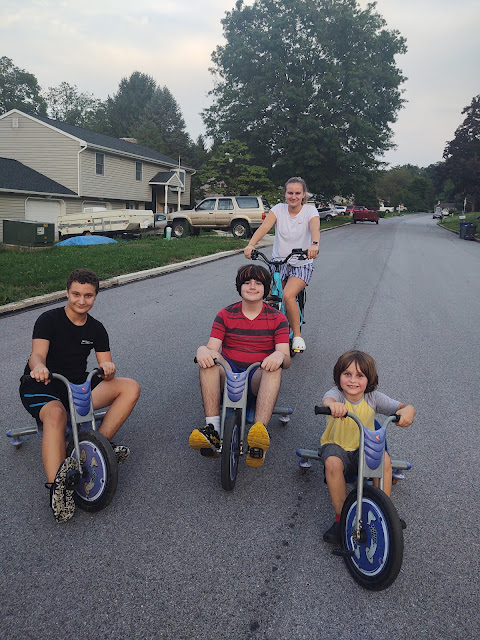 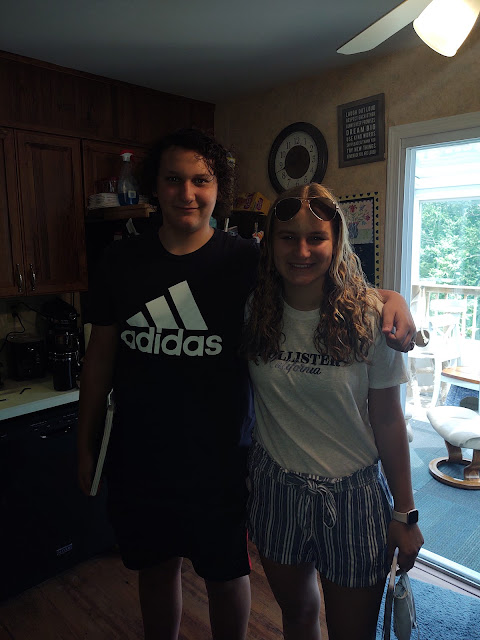 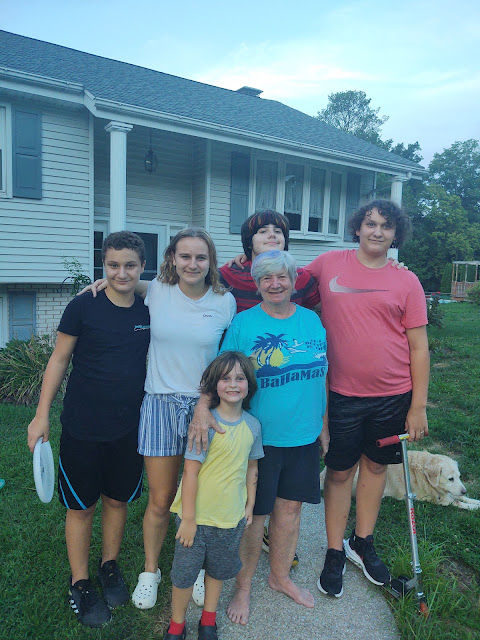 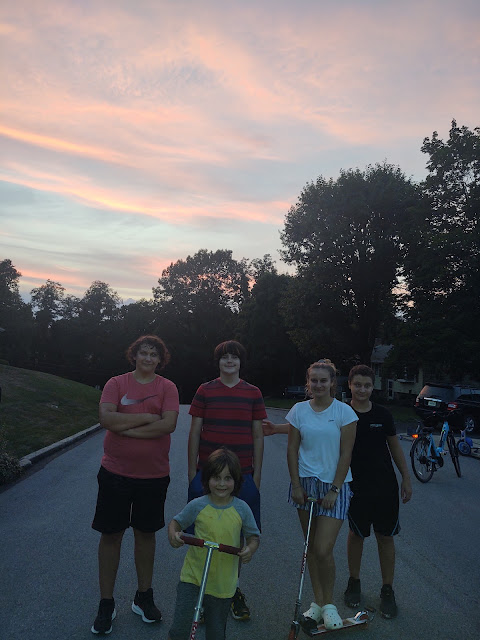 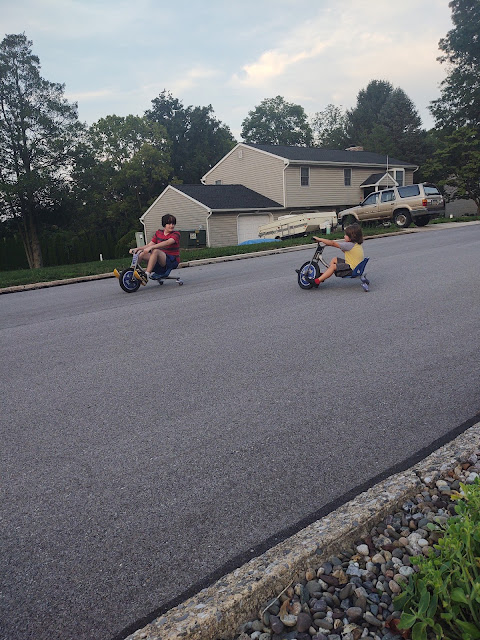 After an exciting night hunting ghosts, most of the kids slept into the early afternoon. Robby was up early because he had his RPG WWII class, an activity that he will wake up from even the deepest sleep to attend. Timmy was also up early because he didn't go on the ghost hunt and, as he told me, it was a happy day to wake up early.

In the afternoon I helped my niece and nephews work through the welcome video packets from their new schools. They are switching to public school this year and it is safe to say that their nerves are on high alert. I know that they will do great, but I'm also trying to do everything I can to ease their concerns and to make this an exciting transition. Change is hard, but it is especially difficult when you are a teenager.

After a relatively lazy day at home, the evening was spent with water guns, water balloons and the slip n' slide. I love hearing the laughter through the air as they play. Timmy was especially excited to play with his cousins in water. In his mind, his cousins and water play create the perfect combination for fun.

While Timmy spent his afternoon gleefully washing Nana's car, I took the older cousins to the bowling alley. Timmy was invited to come bowl with the Crew but, once he saw the hose and a bucket of suds, he was excited to stay home and get wet. It took him nearly three hours, but part of my Mom's car is now sparkling clean. He loves playing in water!

When the sun went down and Timmy went to bed the big cousins hopped into my car and we headed out on another adventure. This time we went ghost hunting. Last year we went on a ghost tour, this year I thought it would be fun to up the ante by using the equipment to try to track down  and communicate with the paranormal.

I wish I had filmed the kids' reactions when they learned that they were going to use the equipment that the "real" ghost hunters use. Dedicated viewers of all of the paranormal hunting shows, they definitely knew more about the various detectors, scanners and communicators than me. I probably should have brushed up on the technology before our adventure, but I didn't really get to use the equipment. My role was more of a supporter, which was fine with me.

They had a blast running through the abandoned haunted Civil War field hospital, eagerly following the beeps and lights from their detectors. I'm an admitted cynic but I did my best to keep my skepticism at bay as the kids enthusiasm grew exponentially with each detection. The kids were completely convinced that ghosts were present and were dedicated to their task of communication. I was impressed with their teamwork as they worked together to try to coax the ghosts into interactions. Even though I'm sure that there is a more logical explanation, I was a tad freaked out when random words were heard through our "spirit box" when the kids started to try to talk to a ghost.

Hearing the voice and having a quasi conversation was, without a doubt, the highlight of their night. I just thoroughly enjoyed spending time with them. I love that a bunch of teenagers still want to hang out with their old Aunt! 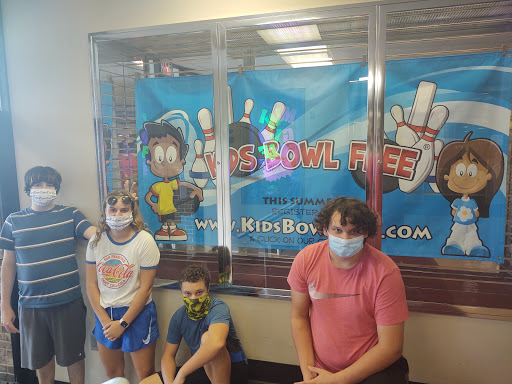 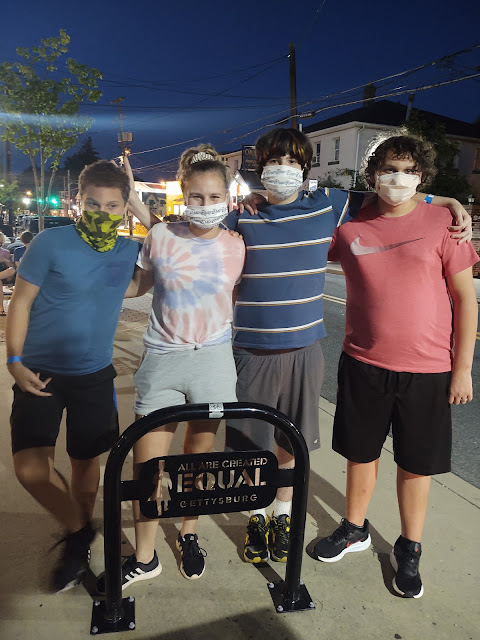 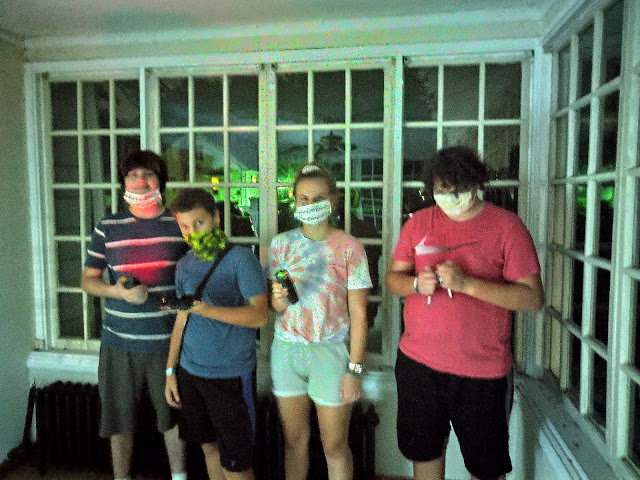 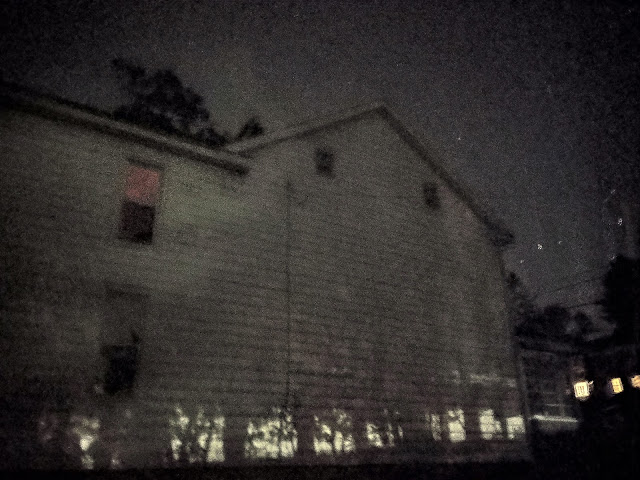 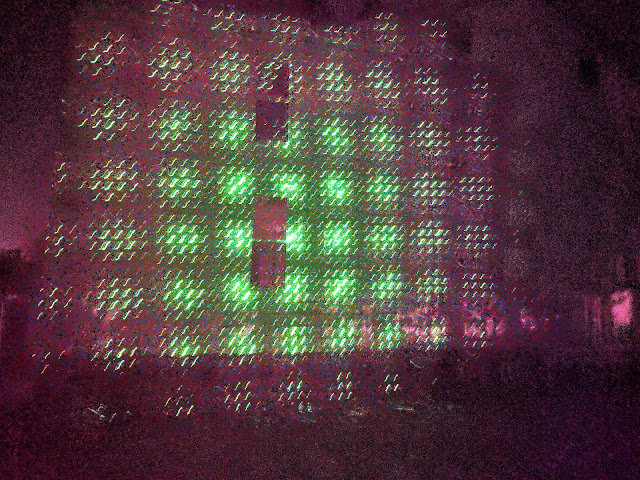 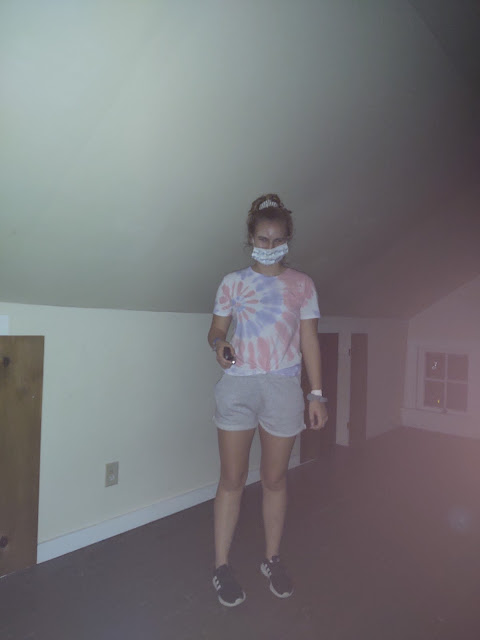 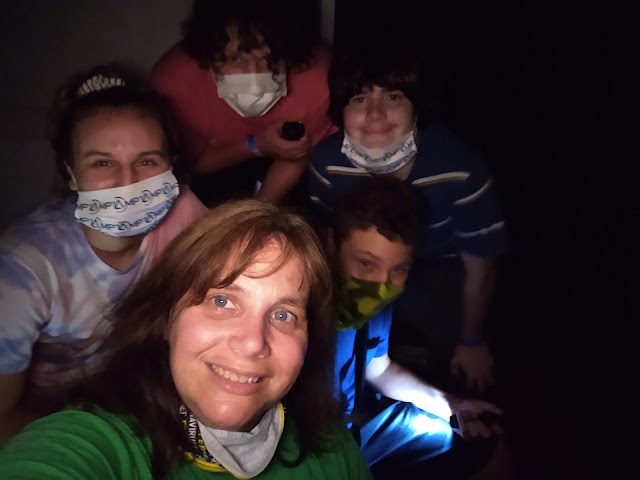 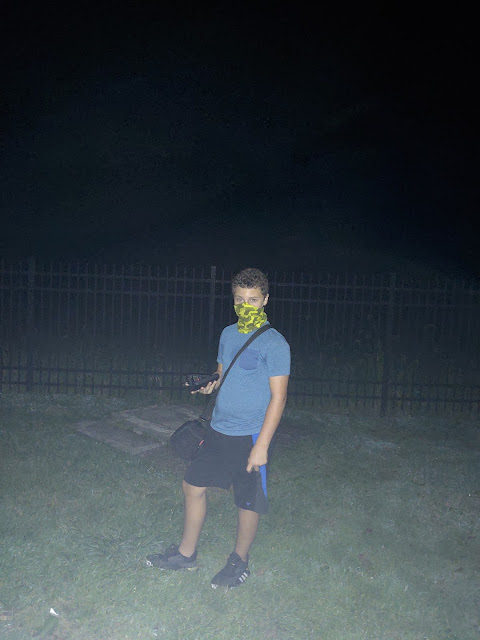 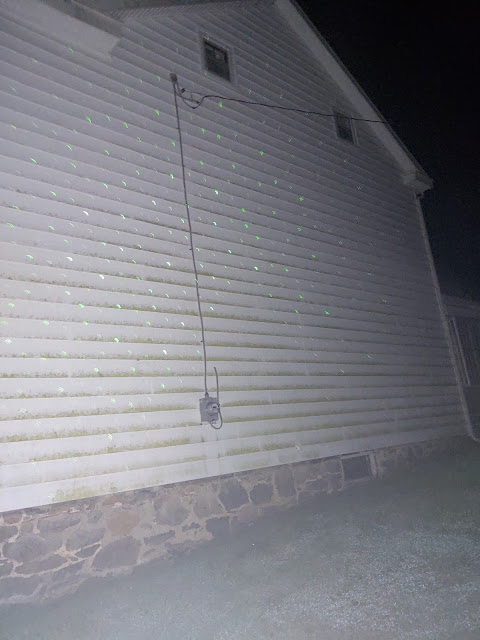 I packed up all of the kids, including Timmy, and took them on an epic adventure over the weekend.  We went to iFly, an indoor sky diving tunnel. All of them were ecstatic, especially my little Hamlet. He has been dreaming of flying ever since he has learned to talk.

I worried that Timmy would be scared, but his bravery shined throughout the experience. He happily donned the flight suit and the helmet. Patiently waiting his turn between Tiffany and Robby, he kept declaring "I want to do that" each time somebody flew.

When his time finally arrived, he approached the tunnel without apprehension. His smile was so bright that I swear I could see it through his helmet shield. I couldn't hear him because of the fans, but I'm certain that he was giggling throughout the flight.

After everybody had their introductory flight, the instructor brought each participant back into the tunnel to experience a high-flight with an acrobatic element. Robby and Jared were nervous but cautiously agreed. Tiffany, Jacob and Timmy eagerly jumped at the chance to soar higher.

Timmy's acrobatic flight could be described in one word: adorable. The instructor scooped him under one arm, had Timmy extend both arms out like Superman and they flew around the tunnel. The flight left a permanent smile on my little super hero's face! 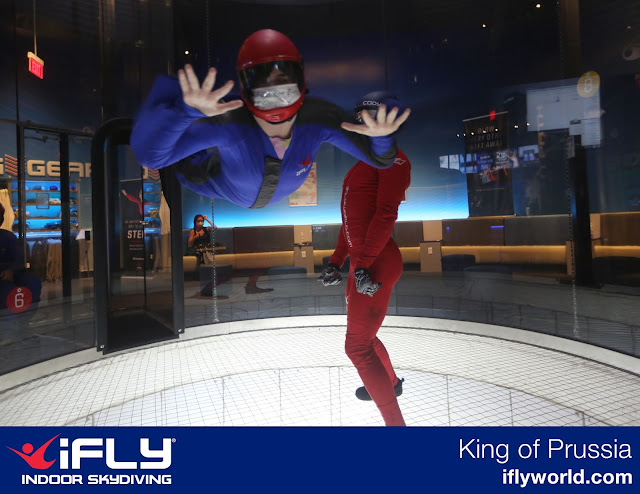 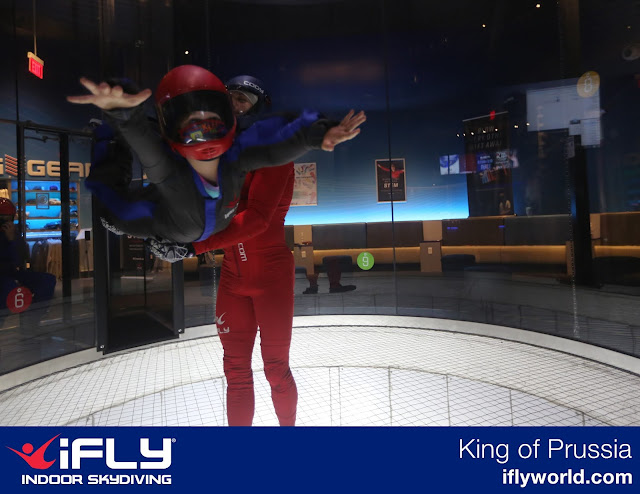 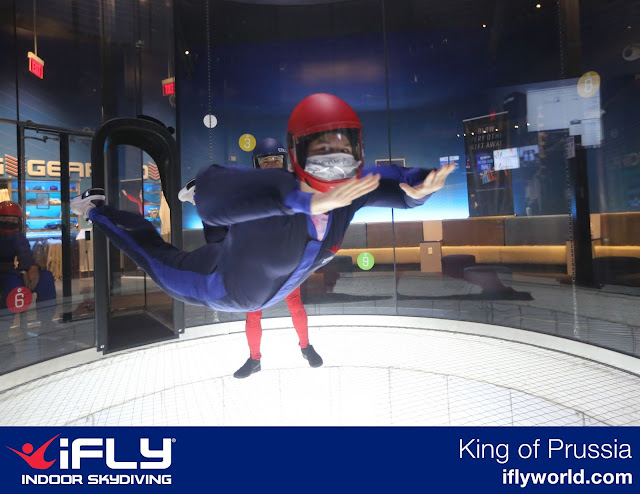 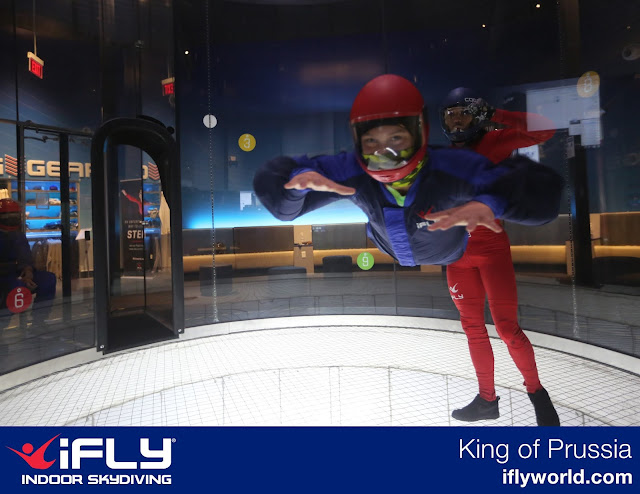 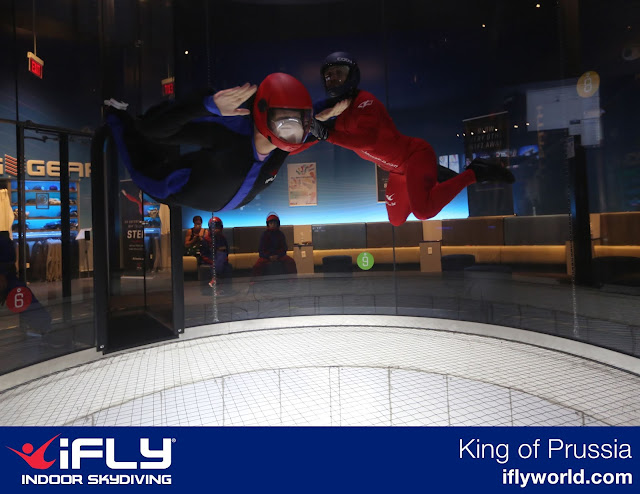