For Scott's birthday last month, I managed to come up with a present to top all other gifts. After much thought and even more research, I arranged for a special trip for both Scott and Robby to enjoy a few days in Florida. To top off their special weekend, the pair will attend the Night Ranger concert.

The pair have been planning for their special weekend since they received the tickets. Finally, after weeks of waiting and planning, the weekend has finally arrived.  Yesterday Robby and Scott embarked on their much anticipated adventure.

Today they will play in the ocean and visit the Sea Turtle program which is hosting Robby's internship this summer. Tomorrow they will probably spend more time on the beach before heading to the Night Ranger concert. (Kudos to me for scoring awesome seats for the show.) Sunday morning they pack up and return home.  The trip is quick, but I'm sure that they will make lasting memories.

After packing up and seeing the Florida bound travelers off on their adventure, Timmy and I headed up to visit with my Mom. I'm looking forward to a few days of hanging out with her and playing with Timmy. I know that she loves spending time with my little guy, and hopefully he will lift her spirits which have been dampened since she broke her hand.  Our adventures this weekend won't be nearly as grand as Robby and Scott's, but I'm sure we'll still have fun.

On a separate note, the classroom observation was incredible. The school has exceeded my expectations, and I am excited about the coming school year.  If I were to design a middle school program to suit Robby, it would be exactly what I observed yesterday.  Thank you for the support during my pre-observation panic!

I am awake early today, not because of Timmy but due to nervous energy. This morning, after dropping the boys off at school (thankfully Robby's teacher's mother has agreed to watch Timmy for me), I'm headed to observe a potential new school for next year. I can't completely rationalize my anxiety but it feels very real.

I'll be relieved when this parent observation is complete. I have been dreading it since it was scheduled last week, but I have been nearly as bothered by the anxiety that the thought of the observation stirred up for me. I feel a lot of pressure to make a good impression for Robby.

Intellectually, I know that there is no reason for me to feel this degree of nervousness. The school should be trying to impress me, not vice versa. They are looking to increase enrollment, so I really have the upper hand in this situation.  Regardless, I feel like I'm going to a job interview. I even picked my clothes out last night!

I have invested way too much mental energy preparing and prepping for an hour observing a classroom of middle schoolers. Next week Robby will spend a day in the class. I have kept my nerves private because I don't want Robby to pick up on my anxiety. He is so much like me, I'm sure he will be apprehensive. But if he knows that I'm also scared, his normal fears might become petrifying.

The past week Timmy's days have been filled with mini adventures. I love going to playgrounds, bounce houses and toddler zones with him. He is at such a fun age, where everything is amazing and wonderful while he still has unabashed desires to be with his Mommy. Hamlet also absolutely adores playing with other kids that I have no doubt he will thrive in school. (If his autoimmune system remains strong through the summer, I think I will have a part-time preschooler next year.)

Today we will forgo the playgrounds and hang out at home. My leg is a little sore from constant bounce house hopping, and I really need to give it a rest. I realize that I tend to overdo it when playing with Timmy. When he wants to play with me I tend to forget that I'm in my mid 40's, and that I only have one leg.

The bursa has calmed down, but I am still using my original socket. Next week I have an appointment to obtain the proper paperwork to officially launch the re-fitting process. Things were so much simpler before I had to get physician documentation before each prosthetic service. It is absurd that I must constantly verify that I am missing a limb! I wish the lawmakers understood the frustrations and lifestyle intrusions involved with jumping through their red tape.

The weather is supposed to be beautiful, so I'm sure I can convince him to trade hopping for bike riding. I'm sure I will still get tired, but at least the impact on my limb will be minimal.

Yesterday was a milestone for my little Hamlet when he had his first experience as a student. In anticipation for the summer I signed him up for swimming lessons. He loves the water, almost too much because he demonstrates no fear around the pool. He is adventurous and loves to splish and splash, but can only remain upright when wearing his life vest.

We decided that it was time for him to learn how to swim independently and yesterday he participated in his first swimming class. To say that he was excited to attend "pool school" would be an understatement. He danced around the living room all morning chanting "pool school" until it was time to go. Waiting for class to start he was all smiles, eager to hop into the pool and participate.

I was apprehensive about his behavior because, although I adore my little guy, he isn't always the best at following directives. However he proved me wrong and was a stellar student. He even received a badge for listening and following instructions!  (My little guy doesn't know it yet, but he tipped his hand. I witnessed that he is capable of behaving and following directions, so I expect this trend to continue into other more relaxed settings.)

Unlike Robby, who was terrified of participating in his first swim lesson, Timmy took to the experience with his natural enthusiasm. He showed no fear about separating from me and participated like a seasoned pro. I was such a proud Mom watching him.

Yesterday was cold but beautiful. The grey skies cleared, leaving a bright blue sky with billowy clouds. After coming home from spending three hours at the bounce house with Timmy (my attempt to tucker him out), Robby and I headed out to find some geocaches. With the sun finally shining and my 11 year old actually wanting to spend time with me, I couldn't say no regardless of feeling tired.

Robby discovered geocaching in November and has been hooked. Whenever possible he grabs the GPS and heads out to track down the treasures (aka caches). Usually filled with trinkets and junk, the real victory is locating the hidden item rather than what it may (or may not) contain. I must admit that I find myself feeling a rush of adrenaline whenever we locate the hidden cache.

While Robby is focused on the GPS and tracking down the treasures, my role is typically that of walking companion. He doesn't need me to track down the cache, but I know that he enjoys the company and I feel safer knowing that he isn't alone. I realize that he is 11 and is growing up, but I still don't like him walking by the busy road by himself.

Besides wanting to keep him safe, I thoroughly enjoy spending time with him. Robby is at an age where he rarely wants to do things with me. He used to be my willing buddy and companion. Now he would rather stay home or hang out with his friends. I know that this is normal, but sometimes I miss my little buddy. When we are geocaching, we are doing something together and he is actually talking to me.

We located three out of our six targeted geocaches. Robby would have kept going and searching, but I needed to get home to finish making dinner. At least making dinner was my excuse to go home. After three hours of hopping with a three year old and two hours of geocaching with Robby, I was tired! 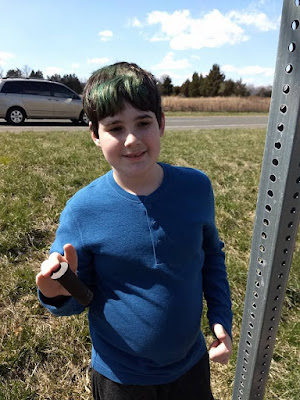 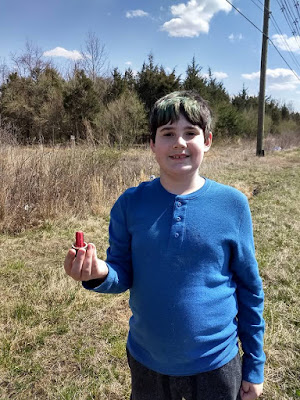 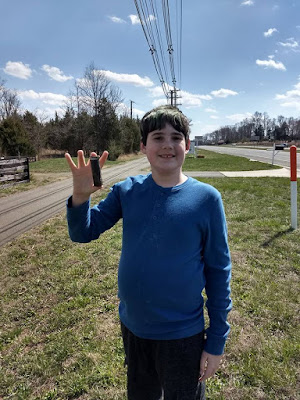