My day took an unexpected turn as I found myself both infuriated with and distracted by a broken toilet. I discovered that the toilet in the bedroom wasn't flushing properly and quickly found myself obsessed with fixing it. Instead of finishing some reports and laundry I scoured the internet for YouTube plumbing videos.  By mid afternoon Timmy and I were walking through the aisles of Lowe's in search of a toilet auger.

I have experience snaking showers and sinks, but I have never tried my skills on a toilet. With a brand new (and pricey) toilet auger in hand, I turned Polar Express on the television for Timmy and set out on my mission.  After a few minutes of splashing in the cold toilet water I realized that the task was easier on YouTube.

It took me considerably longer than I anticipated, but my persistence paid off.  By the time Timmy was watching the young lad return from his North Pole adventure (at the end of the movie) I had finally positioned the snake correctly within the bowl.  I was soaking wet and my hands and wrists hurt (neither of which should happen if you snake correctly), but I had finally dislodged the obstruction.  While I didn't dare examine the clog culprit, I glanced what appeared to be part of a diaper twisted into the snake coils.

Snaking a toilet is a disgusting job, but I felt a surge of satisfaction when the first flush was strong and complete. I saved a lot of money by doing it myself, and I learned a new skill.  It definitely isn't my favorite activity, but I am happy to know that I was able to do it.  Hopefully it won't take me two hours next time.
at 6:36 AM No comments:

Not a Good Mom

I usually do not experience phantom pain during the day.  While many of my friends suffer constantly, it has always been an issue that occasionally plagued me at night. Apparently my phantom foot failed to recognize that the sun was shining, because yesterday I was hurting all day long. By the time mid afternoon arrived I was miserable and frustrated dealing with the issues from arising from a foot that is no longer there. Talk about infuriating!

I have huge respect and empathy from those who battle phantom pain daily. I honestly don't know how people function and live a normal life under those circumstances. Because I was frustrated and in pain, I know that I wasn't the best Mom to my boys. I found myself both irritated and annoyed at little things. Normally I would have just rolled with the punches, but yesterday every little thing felt like it was pushing me to the limits. My little Timmy just wanted to play and bake cookies where I just wanted to curl up on the couch and be left alone.

I felt horrible for my grumpy affect because I know that the kids did nothing to deserve my demeanor. By the time the sun set the pain slowly started to fade. I slept well through the night, and I'm hoping that today I am a better Mom. My boys certainly deserve better from me!

I am frequently asked about phantom pain. I am incredibly lucky because I don't suffer nearly as intensely as many of my friends, but when it occurs I am miserable. The past few days the not-so-phantom pain has made an unwelcome visit in my life. When it happens I am left with little recourse but to try to ride it out while keeping my own misery in check. It isn't always an easy task!

What does it feel like? Phantom pain is an individual experience and people feel and decipher the sensations differently. For me it feels as if somebody is pulling my toenail out with pliers while twisting counterclockwise. At the same time my ankle feels like it is being hit with a hammer while electricity is zapping the bottom of my foot. The pain intensifies at night, making sleep elusive. Of course, being sleep deprived only exacerbates the cycle.

Massage and a heating pad sometimes provides relief. I have also found that lying on my stomach with my short leg bent and tucked up against me as high as possible helps to alleviate the electric shocks. Other than those two hacks, I am forced to simply wait until the pain begins to wane.

Last night my phantom pain was miserable.  I was tossing and turning much of the night, desperate to break the cycle. I keep reminding myself that I'm lucky, which is a difficult sell when you are dealing with a bout of pain.  Hopefully tonight will be different, and my leg will return to normal. In the meantime, I'm hoping Timmy is happy with a lot of Polar Express on the television today because Momom is really tired.
at 6:58 AM No comments:

I'm not going to lie or sugar coat anything. Yesterday was difficult trying to get back into a school/work routine.  Robby complained incessantly about being roused from bed and lamented having to go to school. In all fairness I did glean a tinge of satisfaction pulling off his covers and flipping on the lights when I remembered all of the mornings he woke me up early as a young tyke. Apparently my singing the "Good Morning" song both loudly and enthusiastically was annoying instead of motivating.  Oh well, I tried.

Timmy was upset that both Scott and his brother were gone. He had no qualms about voicing his dissatisfaction with being left with only me for a companion. Unfortunately all of the toddler play areas are closed on Mondays (bad planning if you ask me) so he had no choice but to spend his time with me. I tried not to take his disappointment personally.

Between work and entertaining Timmy, I was constantly busy juggling between tasks and projects. This back to reality thing is the pits! I want to go back on Thanksgiving vacation.
at 6:57 AM No comments:

After a fantastic week of family fun and relaxation, this morning I am readying to face real life again. I was sad to leave my Mom's house on Saturday. I always have a wonderful time visiting with her, and I adore watching the special bond that she has with each of my boys.  It is always hard saying goodbye and leaving, but it is also nice to be home.

We were in Pennsylvania for six days, but we managed to squeeze a lot of adventures into our time. Robby was able to spend a lot of time with his cousins, filling the house with squeals of laughter and excited chatter. Timmy tried to join the Cousin Crew whenever possible, but he was just as content playing with his trains and my Mom. Thursday we enjoyed a full house as extended family converged at my Mom's for an energetic afternoon of eating and talking. While I don't get to see my cousins often, it is always wonderful when we are reunited.

Thursday night Scott, Robby, my niece Tiffany and I braved the crowds and went shopping. Robby and Tiffany were particularly excited by the energy of the store and the overwhelming deals in every aisle. Scott assumed his traditional role as line and merchandise holder. After so many years he doesn't even ask; he simply walks to the back of the meandering check out line as soon as we arrive and holds our place. We drop off our goodies and he moves them through the line until we reached check out. This year he was standing in the line for almost 90 minutes, allowing us ample time to scour the store for everything on our list.  We planned, we shopped and we conquered!

Friday afternoon Scott and Robby packed up and headed out on a father/ son adventure. Robby was thrilled to be attending his first rock concert and Scott was as proud as a peacock to be the one taking him. They had third row tickets to see Night Ranger in a town about two hours from my Mom's house. (Because we didn't want Scott driving late at night on unfamiliar roads we booked a hotel room for the pair.)

At about 10:30 on Friday night my cell phone rang. I was startled by the late night call but immediately picked up when I realized it was Scott's number. As soon as I said "hello" Robby started talking. He was obviously excited and it took me a few moments to understand what he was trying to convey. The guitar player for Night Ranger (Brad Gillis) pointed to Robby during the concert and motioned for him to approach the stage where he was given the guitar pick that was being used. My little rock and roller was absolutely over the moon with this honor.

I'm honestly not sure who was more excited about receiving the guitar pick, Scott or Robby. Scott is still beaming when he talks about the concert and becomes just as giddy when recounting the adventure. I know that the two of them shared an experience that they will both remember fondly for a lifetime, and Robby is now definitely a lifelong Night Ranger fan. Thinking about the memories that were created makes my heart happy. After the concert goers arrived at my Mom's on Saturday we packed up to head back to Virginia, stopping first to cut down a Christmas tree. I was excited to revisit the farm that I used to go to as a child and the experience was just as I remembered. We selected a beautiful tree and Robby insisted on helping to cut it down despite his broken knuckle.
Copying his big brother, Timmy dove under a tree next to him and stayed in that position until the tree was cut and his brother stood up.

I spent Saturday night putting the lights on the tree and setting up the train. Sunday was spent doing laundry, finishing some paperwork and getting caught up around the house.  Timmy was low maintenance because he was enthralled and fully entertained by the train under the fully illuminated Christmas tree.

After the fun adventures of the past few days, returning to reality is a bit of a jolt. 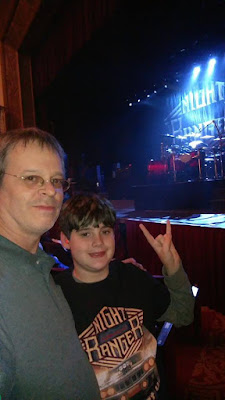 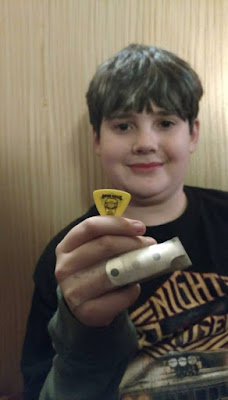 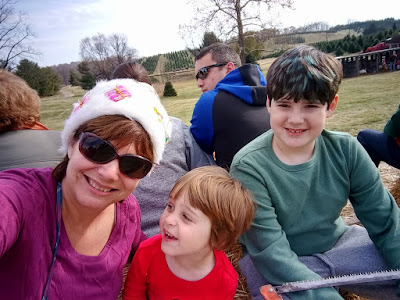 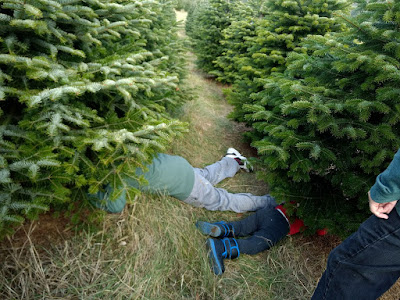