Another week, another mass shooting.

Just when I feel that our country cannot handle anymore heartache another tragedy strikes. I feel both sickened and broken when I watch the news reports. As the wife of a high school teacher and the mother of a middle schooler, I now feel a tinge of anxiety each morning when they walk out the door. The fact that I experience this fear is both wrong and infuriating!

With so much negativity and tragedy streaming through the media, I wanted to take this opportunity to try to share something uplifting. In December I flew to San Francisco to attend my company's holiday fundraiser. (The fact that my new employer, LIM Innovations, dedicates their holiday function to worthy nonprofits is one of many reasons that I am delighted with my professional change.)  This year we raised funds for two nonprofits, ROMP and Upright Africa, both of which are making a true difference for the limb loss/ limb difference community in disadvantaged countries.

Yesterday I received a video featuring a young eight year old boy named Ilunga. Ilunga had suffered the loss of both of his legs and was desperate for the chance to walk. John from Upright Africa refused to give up on this child and worked tirelessly to make his dream of mobility a reality.

Over the past several months LIM Innovations handcrafted new sockets for this youngster, deliberately working to make sure that the sockets can adjust to his growing (and strengthening) body. Upright Africa recently delivered the new legs to Ilunga and have been working with him to relearn balance and mobility.  Yesterday this sweet young child, who felt like the world had abandoned and disregarded him, stood tall and took his first steps.

Perhaps if we celebrate these heartwarming stories the world will be a kinder place.  Happy Friday.

Over the past three days I put a lot of miles on the car, but I failed to reach New Orleans.  Yesterday I packed up Timmy and headed back home. I remain disappointed that I never reached my destination, but I guess I'll have to cross New Orleans off my bucket list another time. Looking on the bright side, all of the reservations were cancelled and the flight was completely reimbursed. I was able to spend the night in a hotel, by myself, and received a $100 airline credit for the inconvenience. From that perspective, I kind of made out in the experience!

True to tradition, our Valentine's Day was low-key. Scott surprised me with flowers and a cake, and Robby made me a beautiful card. Because I had been driving dinner was comprised of leftovers. Nothing fancy, but it was nice to be home and to relax. None of us love Valentine's Day so I suspect I am safe saying that we are collectively relieved that the holiday is over.

Today I have an appointment to evaluate my ankle and another to check my ear. I've been having trouble with both so I'm hoping to find relief. I'm so tired of always hurting! I'm only 43, but waking up in the morning has become an evil game of pain roulette as I wait to discover what part of my body is going to hurt.

In my heart I know the culprit of many of much of my pain. I've gained a lot of weight, and it is difficult to manage with a prosthesis. My limb hurts more than normal because it is being squeezed and contorted into a socket designed for an individual considerably lighter. My biological leg is bearing the brunt of the extra effort required to move. I need to make a change, and the change starts today.
at 6:41 AM No comments:

Happy Valentine's Day.
I was frustrated and disappointed that I wasn't able to attend the Board Meeting, but the plane issue was out of my control. With my trip to New Orleans grounded, I decided to make the most out of Plan B. After express mailing materials to the conference, I drove away from the airport and headed towards my Mom's.

I wasn't able to make it to New Orleans, but I was able to visit with my Mom and the Cousin Crew for a night. Timmy was over the moon with my arrival, which was a complete surprise. (The fact that I walked into the house carrying a box of donuts helped to enhance his delight.) My Niece and Nephews were just as excited to see me, although I could tell that they were a little bummed that Robby was not with me.

During dinner my youngest nephew casually asked his Nana if she had any boxes of Valentines around the house. Not in the habit of keeping Valentines stowed away for emergencies, I could tell that he was disappointed.  I decided to go into "Super Aunt" mode and I packed him into the car to start our quest for Valentines.

As soon as we drove away from the house I informed him that we were not going to offering the traditional Valentine's to his classmates this year.  He is in the 5th grade, and this is his last Valentine's Day School Party. As far as I was concerned, this was a year to go big and to make an impression.  His little face began to light with excitement as we hatched our Valentine's Day plan.

We came back from the store an hour later with bags full of candy and supplies. All of the kids (minus Timmy) helped with assembly, and by the end of the night we had created an army of Valentine's Day Party Robots. I can't wait to hear about how they were received by his classmates! 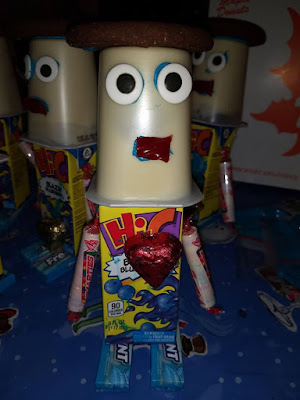 My meticulously planned, quick and efficient trip to New Orleans for the OPAF Board meeting did not go as smoothly as anticipated. In fact, it didn't end up happening at all. I spent the majority of the afternoon in the BWI terminal, happily reading and waiting for the upcoming adventure. After a brief delay we were welcomed on board. I was on my way to NOLA!

It turns out that being buckled into my seat on the tarmac is as close to Louisiana as I was going to get last night. We sat while electricians whirled about on board, intently walking up and down the aisles murmuring into their walkie talkies.

After an hour delay on the plane, the maintenance crew left the plane and we were cleared for take off.  Our plane moved about 15 feet away from the jet way. My excitement to finally be leaving Baltimore was overshadowed by the distinct odor of smoke.  Within minutes we were back at the airport and (frantically) deplaning.

Our flight was eventually cancelled. Because the next flight wasn't due to take off until after my meeting started, I opted for a refund and called the trip a wash. I headed to the airport for the night to rest and to retrieve the car. I'm bummed out but certainly relieved the smoke manifested during the taxi process instead of in flight!
at 8:57 AM No comments:

The weekend was laid back and relaxed, which is a good thing because the next few days are sure to be busy. In January I joined the OPAF Board of Directors, and tomorrow is my first official Board meeting. I'll be flying to New Orleans to attend the meeting, but unfortunately I won't have free time in my schedule to experience Mardi Gras. I am probably one of a few people who fly to New Orleans on Fat Tuesday for the sole purpose of a meeting instead of revelry. I am not sure if that makes me dedicated or boring.

Despite fearing that I am leaning more towards the boring than the exciting, I am delighted to serve on the OPAF Board of Directors. OPAF provides adaptive sport and recreation opportunities to individuals with a myriad of physical disabilities across the country. Through their "First Clinics," hundreds of people are able to try new activities in a safe, supportive and fun environment. I am proud to be affiliated with this stellar nonprofit, and I look forward to serving in my Board capacity in the coming year.

Today I am packing up Timmy and meeting my Mom in Maryland, where we will exchange hugs and cars. She will take my car (with Timmy) to her house while I head to the airport. I fly to Louisiana tonight, participate in the meetings all day tomorrow before flying back home on a late night flight. The next 48 hours will be both busy and exhausting, so I'm glad that I was able to allow my ankle and leg to rest over the weekend.
at 7:06 AM No comments: