Yesterday morning I woke up feeling blue and emotional. I wasn't focusing on a particular situation. Instead I think I was feeling a conglomeration of many issues hitting me at once. Primarily though I was sad about my Dad being sick. I wish that I could do something to help. Being relegated to spectator on this journey is difficult, especially since I am used to trying to fix things. It is a bitter pill to swallow when you realize that something cannot be fixed!

I woke up early and laid in bed, wishing the day away. I just wanted to hide from the world, and I was dreading having to tackle my to-do list. Just as I was in the throws of an impressive pity party the phone rang, jolting me out of my worries and back into reality. Apparently while I was wallowing in the wee hours of the morning, snow had been falling at a heavy clip. School for both Scott and Robby was cancelled.

Although I have grown weary of snow days simply because of the disruption to my schedule, yesterday's surprise day off was a godsend. I needed to have everybody home, to just be together. As soon as I realized that a snow day had been called, my mood began to lift. Of course, my happiness was nothing compared to the enthusiasm demonstrated by Scott and Robby upon hearing the news. Perhaps there is nothing more wonderful than a completely unexpected snow day!

We didn't do anything of consequence, but the lack of activity was refreshing. Scott and Robby spent time playing Plants vs. Zombies on XBox. Timmy spent hours crawling after Charlie Cat. I sat by the fire, worked and tried to enjoy the moment.  Yesterday I was happy for the snow day, but for purely selfish reasons- I wasn't alone. Today I'm feeling better, happier and more centered. I'm looking forward to my Timmy Time today, in a quiet house. 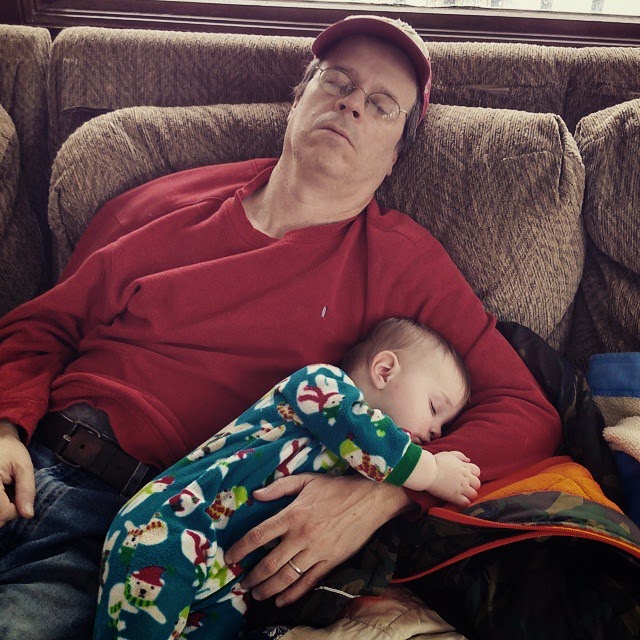 I am an extremely proud Momom! Robby received his report card and, although he was apprehensive, it was fantastic. He received A's in everything with the exception of Writing, where he earned a B. Just as important as the academic marks, he received praise for being compassionate, cooperative, a good listener and a strong leader. I could not be prouder of my little Koopa.

Robby was initially upset about his B, viewing anything less than an A as a failure. After reminding him numerous times that B does not equal bad, he began to relax (although I could tell he was continuing to perseverate). Still trying to rationalize his B, he came to the conclusion that writing is a "stupid" task.  He explained his anti-writing theory.  "Momom, when we write in schools we have to use pencils. Do you know what pencils are made out of?  Wood! (Pause for dramatic effect.)  Wood comes from trees, and in order to make the stupid little pencils for kids they have to kill a tree. I love trees, don't you? Why do you want me to kill trees?  That's why I prefer using the keyboard. No trees die when I use a keyboard."

While I appreciate the effort he put forth in devising his handwriting excuse, I didn't want him to feel as if a B required justification. It is a good grade, and he should still be proud of earning it. So I told him that I am so proud of all of his grades, including the B, and that the most important thing is that he tried and behaved in school. He seemed pleased with my response, and I could see the pride begin to waft over his face.  I knew that he was over the disappointing B when he asked for my phone so that he could call his grandparents.

It ironic that his B was not in handwriting, which Robby assumed, but rather in Creative Writing. Obviously the child can spin a story!

One of Those Days

The only time I lament living with limb loss is when I am having pain or prosthetic issues. Unfortunately today I am experiencing both. My leg was rubbing inside my socket causing a sore to develop. At the moment the sore is small and is not yet raw, but it is tender and I am increasingly aware of every step. I am not in a position where I can easily forgo wearing my leg, so I made an appointment to see Elliot (my prosthetist) this afternoon. Hopefully he'll be able to work some magic and make me comfortable again.

Most frustrating out of this minor setback is the fact that it came from out of nowhere! I had been fine and experiencing no prosthetic issues. I went from chasing  Timmy to lamenting each step seemingly overnight. While I would like to know why it happened, at this point I am more concerned with healing.

I am thankful that I am able to see Elliot today. I know that many of my amputee friends are forced to wait for days for an available appointment. I've never had to wait, which is a good thing because I'm fairly sure I wouldn't do it with grace. While I'm eager about the prospect of fixing the issue before it becomes more troublesome, I resent the fact that I had to rearrange my schedule because of my prosthetic needs.

Today I find myself feeling angry about my limb loss. I hate that I have to rely upon a manufactured device, which are prone to breaking, in order to ambulate. I hate  the fragility of my mobility, that it is the result of a sum of components that are supposed to move in a particular way. When one small variable changes, everything can be thrown out of whack.

I am hopeful that my socket can be adjusted, and that the pain will float away as quickly as it appeared. I am just tired of the little inconveniences that pop up to remind me that I am an amputee. Sometimes it is okay to just throw up your arms and say, "This isn't fair."  Today is one of those days.

Yesterday morning I woke up with a headache. I was hopeful that a cup of coffee would knock it out, but it wasn't successful and the dull ache remained throughout the day. I was in survival mode just trying to keep up with my extremely curious Timmy. Why do babies always seem to become more adventurous when their parent isn't feeling well?  I swear it were as if he knew that I was vulnerable, and he was determined to take full advantage of the opportunity to explore.

By explore I don't mean look around; I am referring to his putting absolutely everything into his mouth. Actually, I mean everything except new foods. Hamlet loves to chew on bits of wood, lint and dirty socks he managed to pull out from the abyss under the couch, but he turns into a sobbing mess when I try to feed him a noodle.  Maybe I should start dribbling the noodles on the floor so that he finds them appetizing?

Last night, perhaps out of pure exhaustion, I decided to encourage Timmy to feed himself. I thought that he might be more apt to eat the new food (baked potato) if he was in control. While he did seem to enjoy the potato, I don't think much actually made it to his mouth.
Only after he had thoroughly smeared the food over his face, his head and his hair did I realize that I had forgotten to put a bib on him first. I also remembered that he is only 9 months old and cannot yet be trusted with a spoon.  He was a silly starchy mess by the time we were finished with dinner.  But he was also happy, and seeing his gummy little smile gave me the energy I needed to survive the clearly necessary bath time.

So Timmy wasn't successful with the spoon, but we're going to modify and keep trying. I think from now on I will feed him before we sit down for dinner. While we're eating he can "practice" with his spoon. This way he is happy and I know that he has gotten at least something in his tummy.  Of course, I still have to figure out a way to dull the allure of the floor buffet. 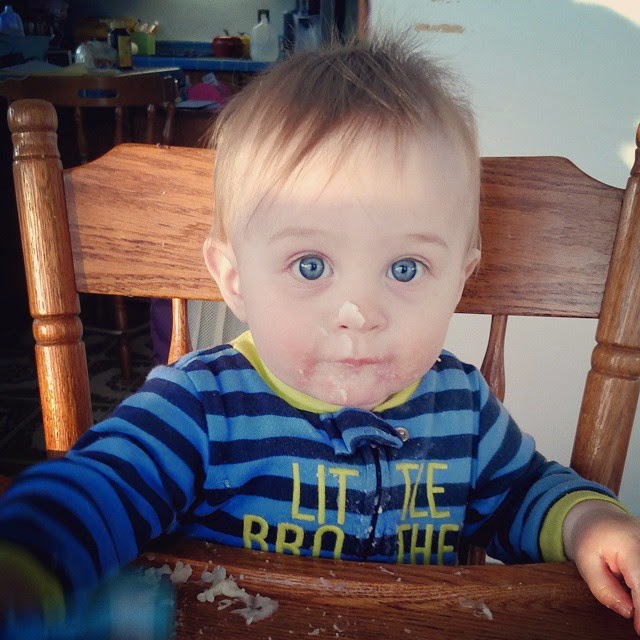 It is safe to say that everybody was disappointed when we received a call Saturday morning announcing the cancellation of the Diaper Derby. A surprise winter storm materialized, dumping nearly 10 inches of snow in its wake. Looking out the window, I knew that the decision to cancel was correct, but that didn't diffuse our disappointment.

Coach Robby had spent hours "training" Timmy to crawl down the hallway, finally had deemed him competition ready. Instead of a Diaper Derby winner, I now have an extremely quick little baby who has gained both skill and speed in his quest to explore. I haven't fully abandoned my Diaper Derby ambitions, but I'm not optimistic that I'll be able to find another one before he begins walking.

So instead of going to the Diaper Derby, Saturday was spent playing in the snow.  Robby's friend came over and the two friends sledded, threw snowballs, and made a snow angel field.  (Incidentally, the Nerf SnowBall Blasters that Nana gave him work like a charm and are highly recommended by my little Koopa!) Timmy even managed to get in some snow fun when Robby and Rowan pulled him around the yard in his little sled. I think he enjoyed sledding, but I suspect he was more excited about being included in the activity.  Hamlet lights up whenever Robby plays with him, and I suspect that this adoration is only going to intensify.

My Sunday was spent tinkering around the house and digging out.  Scott was ecstatic with the return of racing, and nearly 15 years together has taught me not to  bother him during the Daytona 500.  I decided that my day of errands and home improvement projects would have to wait so that he could watch in peace. Instead I spent the race trying to entertain the boys so that Scott could watch his race without interruption.

Today Robby has a delay, but I expect that school should return to normal this week. It was nice having them home, but they need to get back into the flow of the work week.  Well, maybe they don't need it as much as I do!