Life certainly has a way of changing plans. I woke up this morning to the sounds of Timmy giggling and playing. Operating on autopilot, I put on my leg to join him. Seeing his smiling face and bright blue eyes I realized that I am completely fulfilled with my life.

Eighteen years ago I never would have imagined I would be living in Virginia, married with two kids and one leg. Fresh out of college, I was working my dream job in Baltimore. I was working with recently blinded adults and full loving the independence that both a first job and a first real apartment provided. I loved my job and basked in the youthful arrogance of knowing that I had already found my calling.

In a split second, everything changed. I wish I had a sexier journey to amputation, but mine began 18 year ago today with a computer monitor at a conference. A seemingly benign event, something that should have been a minor blip in my life, ended up throwing me onto an entirely different course.

Going to the doc-in-a-box on the Ocean City boardwalk, I never could have envisioned that the injury would lead me to becoming an amputee. I couldn't imagine doing anything else with my life. I also couldn't imagine that a life could be as fulling professionally and personally as mine is today.

I can't say that I am glad that I had my accident, but I can say that I consider myself fortunate. I found a new passion in helping a community of which I am a proud member. I have an amazing family and support system. I am truly blessed.

Happy Injury-Versary to me!
at 7:54 AM No comments:

In my quest for another birthday week surprise, yesterday I picked up Robby from school and we headed to a local photo studio. I had a vision of presenting Scott with the perfect photo of the boys for his desk. With boy boys smiling broadly and striking  a lovingly adorable pose, the photo in my mind was something to behold.

Timmy loves getting his photo taken, so I naively assumed that his desire to play to the camera would transfer.. I could not have been more wrong. He began to scream as soon as we entered the doors. Even Robby's attempt at soothing were in vain. My adorably coiffed cherub was a sweaty, disheveled, red-faced mess by the time the backdrop was arranged.

In a brief moment of calm the photographer scrambled to try to capture my perfect moment. Unfortunately Timmy would not cooperate. I quickly saw my wonderful photo slipping away and began to scramble for plan B.  When plan B (Robby holding Timmy) failed with Timmy pulling Robby's hair and screaming in his face, we moved onto plan C.

I didn't come prepared for plan C, but desperate for a photo gift and frustrated that my plans were not coming to fruition, I obliged and stepped in front of the camera. I really wanted the photo to be of the boys, but instead Scott ended up with one of all three of us. 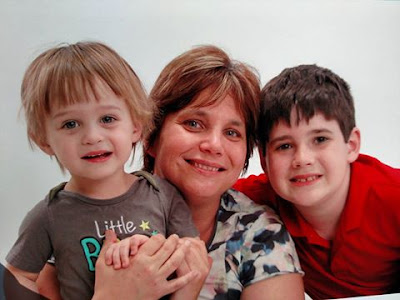 When I was in college and throughout my 20's, I was outspoken about my political views. I often spent election years verbally sparring with coworkers and friends, passionately espousing the attributes of my favored candidate while gleefully pointing out my perceived failings of theirs.  I used to relish the election cycle.

As I've matured, I find myself shying away from publicly discussing my political views. While I welcome a calm discussion, I am no longer the passionate debater of my youth. My aversion to debating should not be perceived as a lack of beliefs or knowledge about the topics. Rather, I've learned that debating vying political perspectives results in fragmented friendships more than changing views.

This political cycle has caused me to retreat even further into my politic-free cocoon.  The nasty rhetoric both frightens and embarrasses me. I find it difficult to explain the hate-filled campaign ads to Robby, who is raised to embrace diversity and acceptance. If he were to spew such negativity towards a peer, his little world would come crashing down on him.  Yet for some reason these individuals are provided a microphone and benefit from non-stop news coverage.  While I will not discuss candidates or my political leanings in this blog, I will say that I believe this country continues to have misguided priorities.

Yesterday a friend posted a link for a child to receive an adapted bike. Although he was born with physical disabilities five years ago, Tyler has persevered and is on the verge of walking. His therapists recommend an adapted bike to help to strengthen his legs and his core, as well as to assist in developing balance. Although this adapted equipment is well-documented for therapeutic use, the family has been forced to enter a contest to try to obtain it for their son. The fact that individuals, especially a young child, must enter a corporate contest in order to obtain a necessary piece of adapted equipment is another heartbreaking example of our misguided priorities. No parent should be forced to put their son's mobility in the hands of a web based popularity contest!

A recent study conclusively proved that providing the necessary equipment at the beginning of the rehabilitation process resulted in lower costs over five years. Yet hundreds of fundraisers are being hosted every single day to help an amputee obtain even the most basic prosthetic. The ability to thrive beyond a disability is now contingent upon personal wealth and popularity rather than adaptation and determination.

Like prosthetics, adapted equipment is #NotALuxury. While I shy away from political exchanges, I will debate this issue until my last breath. If you have a moment, please vote for Tyler to receive his bike. While changing the system will take time, it will only take a few seconds to change his life.
at 6:31 AM No comments:

Yesterday two suspicions were confirmed: Timmy cannot be trusted, and he is now officially faster than me. I can take care of the latter by switching to wearing my running leg full time.  Hopefully with the proper prosthesis I will still have a chance of wrangling my little elf.  He has been taking full advantage of my inability to sprint after him, and it is time to rock his little world.

I am at a loss for what to do concerning his mischievous behavior. He seems to go out of his way to wreak havoc and is especially fond of throwing. From food to remote controls, everything goes airborne when he gets that glint in his eyes.

We were at a restaurant yesterday to pick up lunch for today's birthday surprise. I let go of Timmy's hand for one moment so that I could open my wallet, and he took off sprinting through the restaurant. He was in the storage room by the time I caught him. For good measure, he decided to throw a fit when I ruined his fun. Throwing himself on the ground, beating the floor and screaming at the top of his lungs. The diners and staff were treated to quite a floor show courtesy of my little terror.

While the food was being prepared, I took Timmy outside to walk and explore. He seemed happy and was relatively well behaved. When we went back in to retrieve our food, he was compliant and all smiles.  I failed to recognize the telltale glint in his eyes.

I placed him in a corner booth next to the condiment bar so that I could get some sauce for Scott's sandwich.  I turned my back for one nano second and I heard a loud crash, followed by a delighted giggle. Timmy had thrown a glass bottle of vinegar across the restaurant, smashing it against the bar.

I was simultaneously angry, mortified and exhausted. The staff could not have been nicer. They refused my offer to replace the bottle, but I insisted and finally just stuffed the bills in the tip jar before creeping out of the restaurant.  I hope that Scott likes his sandwich because we won't be able to return to that restaurant for awhile.

Today is a special day in our family because we are celebrating Scott's birthday. Although each birthday is special, this one I am trying to make especially memorable. Today my husband is turning 50!

If you were to meet Scott, it would be difficult to believe that he is now 50. He is aging well without the use of the expensive wrinkle creams that I frequently purchase out of desperation. Without even trying, he has only developed a few well-earned wrinkles and grey hairs. He manages to keep up with both Timmy and Robby, a task that would exhaust most men half his age.

Even though he neither looks nor acts his age, Scott is having a difficult time with this milestone birthday. I am walking on eggshells, trying to navigate the tender line between being celebratory while being supportive and understanding about his aversion to acknowledging that he is now 50. It isn't going to be easy, but I plan on making this a birthday to remember by declaring a week of celebrations.

Each day, starting last Friday, I surprise Scott with something that he loves. On Friday I spent the majority of my day cleaning and organizing his computer room. I transformed it from a wasteland of junk to a man-cave worthy of hosting friends. He was gobsmacked when he walked into the room and saw his new room.  Saturday I managed to secure his favorite cake, and yesterday I provided Robby with the funds to "treat" his Daddy to a special dinner.

The surprises will continue until Thursday, but I don't want to reveal my plans now for fear of his reading this post.  Please join me in wishing my husband a very happy birthday. He deserves nothing but the best!