Yesterday morning I woke up, bent down to put on my leg and became stuck at a 90 degree angle. It took me almost 5 minutes of rocking and stretching (and cursing) before I was able to don my leg and limp out of bed. Lately I have been able to predict the productivity of my day by the level of pain I experience in the morning. Judging from the fact that I could only move with my body contorted like a reverse question mark, I knew it was going to be a long day.

Keeping up with a mischievous toddler while trying to nurse an aching back is an exercise in futility. Although he is only 18 months old, I am fairly certain that Timmy knew that my defenses were weakened. I would love to report that he was caring, loving and well behaved all day out of empathy for my pain. Instead, he took full advantage of the opportunity to wreak as much havoc as possible.

Within a 30 minute period he splashed in the toilets, shoved cat food into his mouth by the fistful and unraveled two rolls of toilet paper through his bedroom. Hoping to minimize the damage, I ended up blocking the exits and limiting access to the living room. I was hoping that he would calm down and quietly play with one of his numerous toys.

I was wrong. My little Hamlet spent the next hour pressing every button available, unplugging cords and raging against the barriers until he was released from his make-shift prison. As much as I begged, he just wouldn't stay still.

I felt a severe muscle spasm last night, but after that episode I am feeling much better. Today I'm able to bend and walk erect without pain, which is definitely a good thing because I need to start cleaning up the remnants of the toddler tornado that hit my house yesterday.

I realize that I am a few days early, but today Robby is attending two Halloween celebrations, and we are fully awash in the spirit of the holiday. This morning his class is going trick-or-treating at a local mall before enjoying a special lunch at the food court. Usually taking Robby to the mall is accompanied by a stream of complaints and procrastination. When he is going with his class, the mall suddenly becomes an epic destination.

Although he won't have a clue as to what is going on, Timmy will delighted to join the "big kids" for the morning.  (Hopefully the excitement of trick-or-treating will tucker my little eaglet out and coax him into taking a nap.) I'm going to try to keep my little eaglet separate as much as possible, but I suspect that he will spend much of his time frantically pulling on his baby leash as he struggles to keep up with his brother.

After school we head to magic class where they are celebrating the holiday with a magical-themed Halloween party. Much to Timmy's chagrin, he is not invited to this celebration. I will probably end up pushing him through the aisles of a local grocery store until my little magician is done with his party. I'm expecting that Timmy won't be thrilled with this activity, but hopefully I'll be able to distract him and keep him occupied.

Want To Be My Buddy?

Lately it feels as if I am spending the majority of my waking hours either preparing for a doctor's visit, sitting in his (or her) office, or decompressing afterwards. Between the boys, Scott's extensive dental issues and my own medical needs, I am sitting in a waiting room several times a week. Timmy, normally happy and ready for an adventure, has begun to fuss and cry as soon as we walk into the reception area.

Yesterday it was my turn to sit on the examination table. I was called into the office to investigate some variations in my recent blood work. Although he was disgruntled and tired, amusing Timmy was not the most frustrating experience during my appointment, nor was the  blood draw before I left the office. For me, having a needle jammed into my arm is not nearly as angst-ridden as stepping on the scale.

I can't say that I was shocked that I've gained some weight. I may be denial expert, but even I recognized that my pants were tight. I guess I was just surprised the number that was staring me down. I wanted to break down and cry, but I chose a different approach. Without giving it much thought, I broached my weight with my doctor.

I was proud of  myself for admitting to the doctor that I needed to and wanted to lose weight. For some reason, I have always felt that a desire to lose weight is a taboo topic. Ironic, because weight is definitely one issue that is impossible to mask. By telling the doctor that I wanted to lose weight, I feel like I took the first step towards a healthier life. Wish me luck, and feel free to email/FB/Tweet (@amputeemommy) me if you want a weight loss buddy. I don't really want to do this alone.

For the second day in a row, Timmy has slept past 5 AM. I don't want to jinx this trend, but I will say that the extra sleep has been wonderful. I am cautiously optimistic that he has turned the corner with his exhausting sleep pattern. It never hurts to hope, right?

Yesterday was a typical Monday. After the chaos of getting Robby ready for school, part of me was happy when he climbed out of the car. It isn't that I don't love my little Koopa, but I'm not thrilled with the snarky attitude that has started to emerge recently. All of a sudden I do everything wrong. I'm amazed that I have been able to survive before my know-it-all nine year old was there to remind me of everything that I am doing wrong or that should be done better. Needless to say, I'm not loving this stage. I'm fairly confident that it is only a sneak peek at the teen years, but I'm going to mask myself in denial and hope that the Snarky Robby doesn't visit for long.

After dropping off his brother, Timmy and I headed to the doctor. After an extremely long appointment (which is surprising because we saw the physician for maybe 5 minutes) I carried my exhausted, hungry, angry, screaming toddler to the car. He fell sound asleep on the way home but of course he woke as soon as I turned the ignition off and opened his car door.  My hopes of a productive nap time were ruined.

Instead of napping, Timmy and I made cookies for his Daddy's school.  He isn't a skilled assistant (yet) but he certainly enjoys sampling the dough! I am thoroughly enjoying having a little baking assistant again.

Friday morning Robby's teacher met me at the door, eager to share a story from the previous day. After ushering my little guy into the room and making sure that he was not within earshot, she began the tale. During snack time on Thursday, Robby confided a secret to both his teacher and her husband. He revealed that he was looking forward to being 10 because then his Daddy promised that he is old enough to finally go to a whore house. He continued by explaining that he is looking forward to going to the whore house with his dad so that he can finally get a look at all of the witches inside. Hearing him say, "But we aren't going to tell Momom that we are going to a whore house because she'll say no, so we are going to go without her knowing" caused his teacher's husband laugh so hard that he coughed his chocolate milk out of his nose, making him late for work.

I never thought I would need to clarify that Robby is not going to a whore house with his daddy. He meant haunted (horror) house. He is looking forward to going to a haunted house with his daddy next year, not a whore house.  Thankfully his teacher knows our family well enough that she saw nothing but humor in the story. Although it was the source of some embarrassment, I do have to admit that the whore house story put a smile on my face for much of the day.

In the afternoon I picked up Robby and we headed to the mall for Halloween photos. I've always wanted to have professional photos taken of the boys in their coordinating costumes, but somehow I never got around to doing it. Scott met us at the Picture People studio and everybody quickly changed into their costumes.

Robby is delighted with his World War II Officer's costume. He was walking around the studio with his head held high, saluting anybody who looked in his direction. Scott is such a good sport, happily dressing into his World War II Private costume. He looked something like Gomer Pyle with the tan suspenders and pouches.

Wanting to keep everybody coordinated but not wanting to put him into a military costume (I just thought he was too young to be in uniform), I had a difficult time coming up with a costume for my Hamlet. When I discovered the baby bald eaglet costume, I knew I had a winner. He was the patriotic symbol that tied everything together. It turns out that my little Hamlet enjoys wearing costumes.

Timmy loves being dressed like an eagle. After a brief moment of shrieking as we pulled the furry tunic over his head, he was immediately delighted. He joined his brother dancing around the studio flapping his little wings and giggling.

Unfortunately, my happy little eaglet wasn't satisfied being cooped in the studio. He spied the mall and took off like a flash. I wish I had a video of the scene that unfolded.  A little baby eaglet running through the center of the mall, squealing and flapping his wings. He was being chased by a World War II private and a pint sized Officer, screaming "Catch that bird" at the top of his lungs. Our little eagle flew all the way to the food court before his little wings were finally clipped.

Halloween is an unpredictable and wonderful time of year in this house.  The adventures continue... 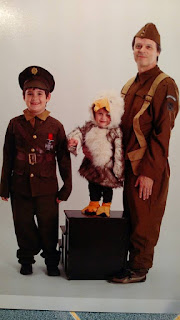