Yesterday was long and exhausting, which is probably contributing to my gloomy mood this morning. I began work at 7, and continued until almost 10:30 at night. I had trouble unwinding and, despite my fatigue, found myself tossing and turning for a few hours. I was looking forward to a few nights of uninterrupted (i.e. child-free) sleep, but it seems that my slumber aspirations won't be come a reality.
Despite the long hours, I have had a wonderful time visiting with my amputee friends. I love the camaraderie of those impacted by limb loss, and the wholehearted acceptance shown to everybody who enters our ranks. Walking through the conference halls, I find myself overflowing with pride and admiration for this wonderful community. Losing a limb stinks, but becoming part of this amazing tribe of individuals helps to lessen the blow.  If there is a benefit to limb loss, it is definitely the becoming embraced by the amputee community.

I woke up this morning profoundly sad. I miss my boys! Since I can't hug them for a few days, I'm hoping that many of my amputee friends will fill the void today as I attack day 3 of conference.

Yesterday was busy setting up signs and passing out t-shirts. It wasn't the most intellectually taxing work, but I was happy to pitch in to prepare for the event. As an added bonus, I had logged 10,000 steps before lunch. As a reward, I enjoyed a guilt free slice of cake after dinner.

My friends started to trickle in throughout the afternoon. I was able to grab a quick hug (and a few selfies) while I was working. I'm hoping to break away from the t-shirt table to be able to visit today. (Of course if you are at Conference, feel free to visit me at the table. I'll most certainly be there!)

Coming to conference as a participant and not an employee is rising on my bucket list. I see all of my friends having fun while I'm tethered to a booth. Sometimes I feel like a kid watching Christmas morning through a window, close enough to witness all of the fun but unable to fully partake. Of course, having lots of visits today would help to stem my loneliness behind the piles of t-shirts!
at 6:50 AM No comments:

Almost as soon as I said goodbye to Robby and drove away I began to feel excited about traveling to National Conference. I think that my enthusiasm was layered underneath the anxiety and sadness of leaving my family. Once those worries were peeled away, I felt nothing but happiness driving down the road.

I saw several friends last night, and I'm looking forward to hugging and visiting with more as they trickle in today. It is so much fun having everybody in one place. Like I mentioned yesterday, it is unique to not be the only person missing in a limb. In a crowd of amputees, I completely blend in with everybody else. (Or, blend as much as possible for me!)

Today will be fun but busy as I help to set up for the event. If you are at conference, come and find me to say hello. I saw a cafe in the lobby that sells insanely yummy looking cupcakes. Perhaps we could hang out in person!
at 7:16 AM No comments:

Yesterday Robby and I traveled back to Virginia after our wonderful weekend together.  Timmy stayed in Pennsylvania with my Mom. She will be watching him for the week while I am working at the Amputee Coalition National Conference in North Carolina. Leaving him there, although I know that he is happy and spoiled, was difficult.

Even though I didn't have my little toddler crowing this morning, I found myself waking up early out of habit. My house was eerily quiet this morning without my little buddy! I don't have to keep my coffee on a high table, and the television remotes can remain in reach. It is strange being able to sip my coffee without reheating it.

After I drop off Robby at school, I'll be heading to North Carolina. I know that saying goodbye to him will be just as difficult. I really hate goodbyes!

It is hard leaving, but I'm looking forward to the conference and being reunited with my amputee friends. I love the kinship and special relationships that form between individuals who truly understand what it is like living without all of your biological limbs. It is empowering to be "normal" for a few days. At conference, those with all of their limbs are definitely the oddities!
at 7:23 AM 1 comment:

I wish I had the words to adequately convey how wonderful the past weekend was with Robby. We went to the World War II weekend and my little history buff couldn't have been happier. Surrounded by vintage trucks, jeeps, planes and uniformed reenactors, he was truly in his element.

We spent two solid days touring the various encampments, talking with the soldiers and watching the skirmishes and "epic" plane battles. Robby asked questions and surprised many by his knowledge about the battles and the armory used. I honestly had no idea that he knew so many details about WWII!

Robby was smiling from ear to ear throughout the weekend. Although touring military armor isn't my ideal activity, Robby's joy was contagious. I think that this weekend ranks among one of the best of my life, not necessarily because of the activity but because of my touring buddy. He was genuinely happy and excited, and I loved being part of his enthusiasm and witnessing his joy. 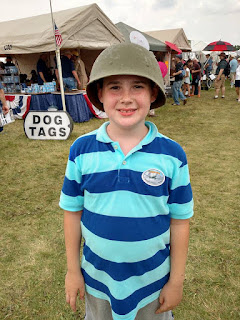 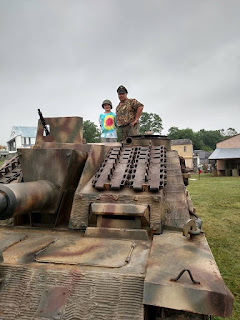 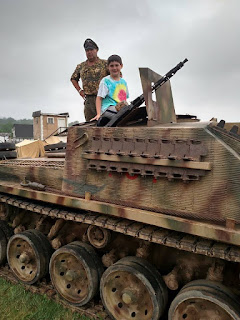 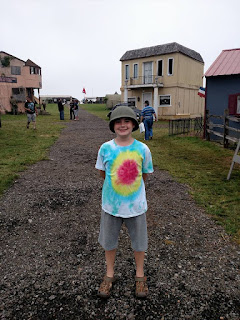 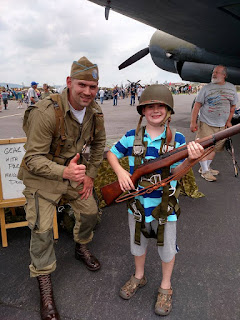 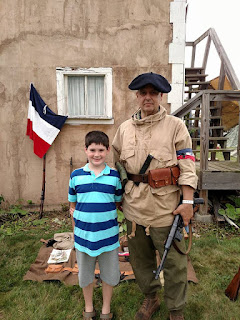 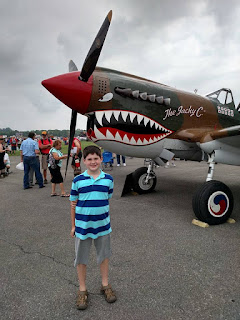 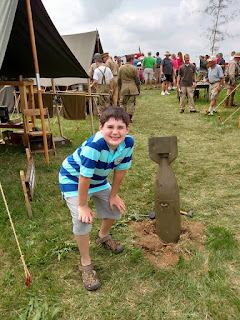 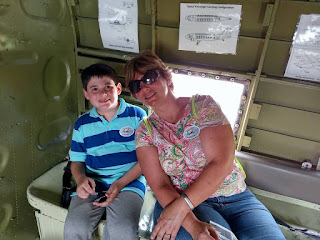 .
Perhaps one of my favorite parts of the weekend was stopping by the National Cemetery on our way home. Robby wanted to tell Pop (my Grandfather) all about the adventure.  Although they never met, Robby feels a kinship because they share a name and a love of vintage aviation. Without prompting, and not knowing that I was taking a photo, Robby held his new helmet of his heart as he spoke to Pop. 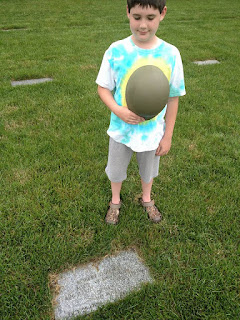