Please listen to the newest episode of Amp'd.  Dave and I discuss the medicare proposal and ways to make your voice heard on the issue.

If you have not yet signed the petition, you can find it here.
at 11:08 AM No comments:

We Need Your Help!

My friend Dave and I are trying to be rallying the community, hoping to gain more momentum in the fight against these horrific proposals. After a lengthy chat yesterday morning, we agreed that far too many amputees are not fully grasping the ramifications of these proposals.  While it may be comforting to believe that your prosthetic care will not be impacted because you are not currently on Medicare, no amputee is safe if these proposals are enacted.  Private insurers follow Medicare, so it will quickly become a matter of when, not if, your lower extremity prosthetic care will change.

Imagine having to undergo inpatient rehabilitation each and every time a new prosthetic is needed. I know I don't have the time, nor the exorbitant co-payments, to be admitted to a facility for such an erroneous reason! Why inpatient rehabilitation?  Because the prosthetist will no longer have a vote concerning your functional level. Instead of guiding the prosthetic care team, the prosthetist will be limited to simply assembling the predetermined components and building the socket.

Are you utilizing an elevated vacuum system? The new proposals completely eliminate this possibility.  Custom fabricated inserts will be replaced with off the shelf, one size has to fit all versions.

Even occasional reliance upon canes, crutches and wheelchairs will equate a prosthetic denial for the devices that would best benefit the individual. As I learned years ago, crutches are cheaper than legs. Of course, the fact that the MobilitySaves study, proving that mobility aids and prosthetics save money in the long run, is being completely ignored.

In order to gain awareness about the potential impact on the average amputee, Dave and I are launching a social media project.  We are asking all amputees to film a short video clip, no more than 14 seconds, featuring them doing a normal daily task with their prosthesis. At the end of the video, state the activity and add the words "not a luxury."  For example, I will be filming a clip of walking with Timmy and at the end of my video I will say, "Taking care of my child is not a luxury."

We are looking for average activities, not super athletic feats. Whatever you are able to do because of your prosthesis, please film a clip. We want to flood social media with videos demonstrating the impact of a prosthesis on regular life.

Please share your video through all of your social media outlets, using the hashtag #NotALuxury.  We are also encouraging everybody to tweet the video directly to @CMSgov, the official twitter handle of the organization behind this horrific proposal.  Members of this committee need to see and hear directly from the community!

Please help us with this project by making and posting a video.  We need as many involved and visible as possible.  The fate of future prosthetics is at stake!


Videos should be tweeted in the following way: 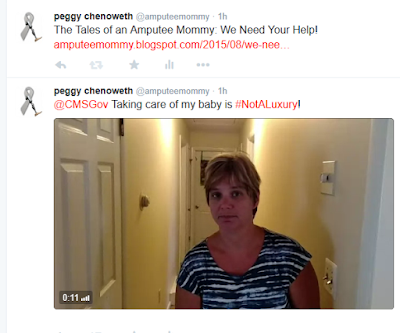 Deciding to keep the summer adventures going, yesterday I packed up the crew of curious kids and took them to the Science Center. Keeping with tradition, my Mom and I decided to keep the destination a secret. The kiddos only knew that they were going on another special adventure, but that it was within driving distance.  Needless to say, the excitement was contagious.

Robby was the only one who had experienced the interactive Science Center, allowing him to become a bit of a leader through the multi-level complex. After realizing that they were allowed to touch and interact with the exhibits, the kids quickly scattered, playing and interacting within the sections of their unique interest.  Of course, they all seemed to converge frequently at the hurricane room.

While the big kids were playing through the Center, Timmy and I stayed in "Toddler Town." My little explorer entered the gated utopia and immediately bypassed the toys and climbing structures, heading straight to the enormous water table. Within seconds he was splashing and giggling.

The smiles on their faces, along with Timmy's soaking wet clothes, confirmed the success of another one of Aunt Peggy's Special Adventures.

On a different note, I would appreciate all of my readers taking the time to sign this petition.  Prosthetic care is threatened for lower limb amputees, myself included. (Private insurers almost always follow Medicare's lead, so these proposed changes will eventually impact everybody in the community.)  Because I have previously utilized crutches, I could be denied a prosthetic in the future.  Please help the community by signing and sharing.  We need everybody's voice. 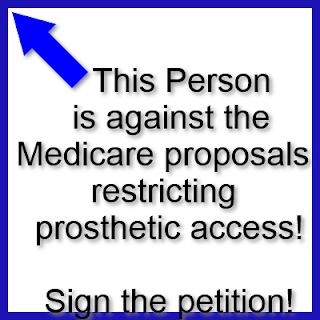 Sunday afternoon I drove to my Mom's house because I wanted Robby (and Timmy) to spend a few days playing with their cousins before the end of summer. On the drive to her house I had a brilliant idea, and I couldn't wait to put my plan into action. As soon as I arrived at her house I went to work on the details.

Robby and my niece Tiffany knew the plans, but everybody else only knew that we were going on one of "Aunt Peggy's Special Adventures."  They woke up early and were fed a substantial breakfast. My nephews were in a tizzy with excitement and curiosity, but we never revealed our secret. When we arrived at the "real" train station they were absolutely gobsmacked!

It didn't take long for our fellow passengers to surmise that this was the first time on the train for three of the four kiddos. They were enthusiastic about absolutely everything, from the paper doily on the back of their seat to the recline of the "super duper comfy chairs." Of course, nothing was able to surpass the wonder of being able to use a bathroom on a moving train. I'm fairly certain that each child visited the restroom no fewer than four times on our 90 minute trip.  As my youngest nephew proudly told the conductor, "It sure is fun sitting on a moving toilet."

In retrospect, I probably could have limited the adventure to a train ride and everybody would have been happy. But I wanted the day to be epic, and I knew that the next surprise would certainly fit the bill.  We went to visit the Liberty Bell in Philadelphia.  (Each child has expressed an interest in seeing the Liberty Bell, so I figured it was time to make it happen.)

After the Liberty Bell, which was deemed smaller than anticipated, the crew spied the double decker tour buses that tour the city. I could see the gleam in their eyes, and decided on a whim that it was a beautiful day to sit on the top of an open air bus and drive through the city. The smiles on their faces shone almost as bright as the noon sun. Considering the walking that it saved us, it was perhaps the best investment I made on the trip.

We hopped off the bus to visit the Betsy Ross house, which was a bigger hit than I expected. After that we ate lunch at Reading Terminal and enjoyed ice cream from what was purported to be the oldest ice cream store in America.  The final tour was, in my opinion, the best. We visited Eastern State Penitentary, deemed the fourth most haunted location in America.

Three of the four thought the abandoned prison was awesome.  The large wet spot on the bottom center of my youngest nephews green shirt revealed that he was not amused when locked in the abandoned prison cell.  (Thankfully none of his siblings or Robby mentioned the obvious accident and the evidence dried quickly in the August heat.)

Everybody had a wonderful and exhausting day visiting Philadelphia.  Three of the four fell fast asleep on the train ride home.  Of course, they did manage to wake up in time to use the bathroom a few more times before disembarking the train. 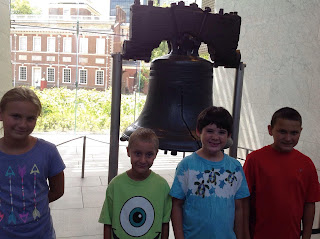 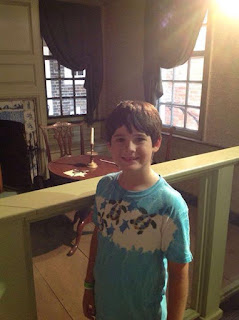 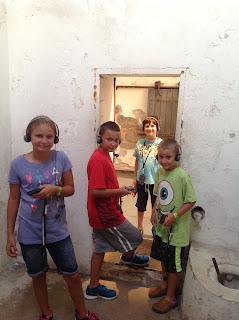 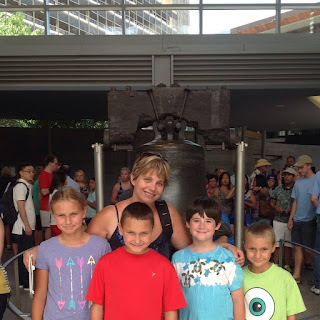 The past few days have been a flurry of activity and frustrations surrounding the Medicare proposals. I am honored to lend my efforts to rescinding these proposals, but I find myself frustrated that the amputee community does not seem to understand the gravity of the situation. There seems to be the misconception that these proposals, if adopted, would only impact those individuals who are currently utilizing the Medicare system. While this is technically true, I fear the community is relying upon a false safety net.

Private insurers almost always follow the lead of Medicare. If these disabling proposals are adopted, it is widely assumed that most if not all insurance policies will quickly follow suit. After all, these proposals offer an abundance of reasons to deny costly devices in lieu of cheap crutches. As sad as the reality is to admit, insurance companies always want to provide the cheapest option, despite the impact on quality of life. These proposals provide them with carte blanche to utilize their denial stamp.

These Medicare proposals threaten to take away the quality of care that amputees deserve and the devices that are required to live active and healthy lives. This is not a time to rely upon others to fight the battle; we need to unite and fight against proposals that threaten our access to prosthetics. In one voice we need to send a clear message that denying prosthetics is wrong and will not be tolerated. This is not a battle for others to fight; we all need to become involved.

I urge everybody to write to and call our elected officials. Please sign this petition and continue to rally support. These detrimental proposals threaten our mobility, and we must all work together to stop them!
at 6:21 AM No comments: