Yesterday was both emotionally and physically draining. As I was falling into bed at night, I realized that I am not used to being so busy! I was moving from the moment I woke up until I fell asleep, juggling a day full of with meetings, appointments and the boys.

Although I was physically tired, I have no doubt that much of my exhaustion stemmed from emotions. I went to the oncologist (I still hate writing that phrase) and we finally developed a plan. My next surgery is scheduled for August 21. While I am not thrilled with the prospect of being cut open again, I am relieved to finally have a firm date. I feel like I have been living in a health limbo for months. It is empowering to finally take action, even when the action isn't pleasant.

I feel overwhelmed when I think about the surgery and recovery, so I am resorting to my tried and true adaptation technique. I am ignoring it. I am going to try to focus on having fun during the next two weeks and pack a summer's worth of adventures into a few short days. I will have plenty of time to fret and worry while I am recovering. In the meantime, I have no intention of wasting any more of my summer.
at 6:42 AM No comments:

Much to my chagrin, today will be busy. I'm going to see Elliot first thing in the morning to pick up my newest socket. I'm looking forward to it because my leg has shrunk significantly since Monday (when I received my last socket) and I'm tired of juggling padding to make it fit. I can't wait until I can just step into my leg and walk. Managing volume change stinks!

Immediately following my socket fitting, I have to drive to the Oncologist. Wow, I hate typing that sentence!  I have been trying to avoid thinking about this appointment.  I'm sure that the doctor is nice, but his office is not one in which I want to spend any time.  Every time I think about the upcoming surgery, I feel overwhelmed and scared. Intellectually I know that I'll be fine; I just wish I could get my heart to release the fears.

In an effort to fulfill my need to avoid, yesterday I resolved to stay busy by making Robby feel special. He has been a begrudgingly wonderful big brother. He is the first to admit that he is "not a big fan" of being a big brother, but he also enjoys entertaining Hamlet and making him smile. I know that the adjustment has been difficult, but he has handled it extremely well.  I'm proud of him and wanted to remind him that he is so special.

Initially he seemed confused when I wished him a Happy Robby Appreciation Day, but he quickly embraced the idea. From breakfast until bedtime, we let him make the decisions. Thankfully he didn't ask for anything outlandish!

After enjoying his requested breakfast of pancakes and bacon, he and his Daddy played Xbox for a 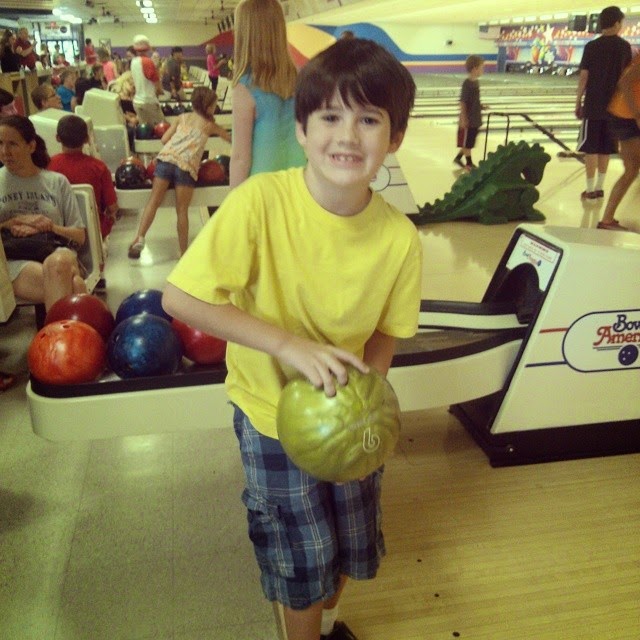 few hours. After lunch we hopped into the car and went bowling. To everybody's surprise, Robby rolled two consecutive strikes. Needless to say, he was a happy Koopa.

I loved celebrating Robby Appreciation Day so much that I think we just invented a new family tradition. Not only was Robby reminded that he is a special and important member of our family, but I was able to focus my attention on something other than my impending appointment. It was a win-win for both of us.

If you have been following this blog for any length of time, you are probably aware of my relationship with my insurance adjustor.  Because my injury is covered through workman's compensation (I was at a conference when my foot was crushed), all of my leg-related expenses have to go through their system. My adjustor, whom I nicknamed Elsie to protect her identity, has taken the concept of red tape and pinching a penny to a whole new level.

Perhaps I was naive, but it wasn't until I had to interact with Elsie that I realized that her job is ultimately to save her company money rather than to provide me with the equipment to live my best life. She has met me with nothing but obstacles and rhetoric since she was assigned to my case. In many ways I was becoming more disabled by having to deal with this heartless individual than the loss of my leg.

The fact that Elsie is also an amputee was salt in the wound.  She, more than any of her coworkers, should appreciate the need for working components, a comfortable socket and liners which have not lost their integrity.  Instead of approaching my case from a common perspective, she has made everything a battle.

The final straw was this past winter when she requested that I pledge never to become pregnant again in return for a new leg. I knew that Elsie had crossed a boundary and that her request was not only unprofessional but illegal. Not expecting anything to be rectified but knowing that it was the right thing to do, I filed a formal complaint with her employer.

It turns out that the squeaky wheel does sometimes get the grease. Yesterday I learned that Elsie has been removed from my case! I have been reassigned to a new adjustor who, from all accounts, seems to be both professional and fair. She has already approved my new post-surgery sockets, which is something that would have been a battle under the previous tyrant. As an unexpected bonus, my new adjustor has also approved a new swim leg.

I feel liberated to be free of Elsie. It felt like she went out of her way to make a difficult situation nearly impossible. I don't think I've ever encountered somebody who lacked such basic empathy and human compassion. I am sure that my doctors and Elliot are just as delighted to be rid of her red tape stalling yet time consuming tactics.

Yesterday I received my newest test socket and, to my delight, it fit perfectly. I left the office walking on a pain-free Cloud 9. I felt invincible, as if I could walk for miles, and feeling as if the pain of the surgery was a distant memory.  I hopped in the car and drove home, excited to show the boys my progress.

Unfortunately the step into the car was the last one that I took feeling completely pain free. I stepped out of the car and immediately knew that my limb had shrunk. In the thirty minutes it took me to drive home, my leg became smaller and the socket no longer fit perfectly.  I am frustrated, but I also know that these changes are par for the course when being fit for a leg.

The smaller, more comfortable socket provides compression against my limb which is why I felt no pain walking. Compression naturally pushes out more volume, causing my leg to shrink. It is a cycle which will only be broken when my limb volume stabilizes and I no longer shrink. I was hoping that I was at that point, but obviously I was wrong.

I was able to compensate for the volume changes by adding pads, but I know that the measure is stopgap at best. Although I can walk with the pads and socks, my gait is not nearly as casual and carefree as it was when I first donned the new leg. Today I will head back to Elliot's office so that he can make an even smaller socket.

I had forgotten the seemingly endless adjustments required for the perfect socket, but I know that it is worth the time investment. For a few hours yesterday I felt normal. Hopefully today we will make another leg, and I am optimistic that the size will work for a longer period of time. This is probably the only time in my life I will curse anything shrinking on my body!

Friday afternoon I met another milestone, and to be honest it probably did more for my psychological health than the recovery of my leg. Determined to regain a sense of normalcy, I packed up Robby and his cousins, and we went to the park for the afternoon. Although I was relegated to the role of observer instead of participant, it was wonderful to be able to be outside and watch them all play.

The playground is situated a football field away from the parking lot, so simply getting to the structures was a monumental feat for me. I walked slowly and methodically, and perhaps most importantly without crutches until I finally reached my goal: the bench. It took me awhile and it wasn't pretty, but I did it! Robby and my niece stood on the top of a giant rock and cheered me as I made my way towards them. I am so lucky that I have a son who is so supportive of me during my recovery. This summer would be exponentially more difficult if he weren't as understanding and caring.

Robby and his cousins had a great time running around and being silly. I was thankful for the fresh air and for my newly acquired mobility. Not only was I able to enjoy the day with the kids I love most in the world, but also I was able to provide my Mom with a much needed respite. She stayed at home and took a nap with Timmy.

Even though my leg was sore by the time, I finally arrived at the park. I tried to push past the pain and enjoy the day. At one point during a moment of pure stupidity, I decided that I was going to swing with Robby. I hobbled over to the swing set, took my place on the seat and pushed off. The pressure the prosthetic pressing against my limb as I was swinging in mid-air nearly brought me to tears. I may be well enough to walk (sort of) to the park, but I am certainly not recovered enough to play.  The lesson was painfully learned, and I re-assumed my position on the bench next to the crocheting grandmother.

Even though I wasn't able to play, going to the park signaled another milestone in my recovery. I can't wait until I can put on my leg and take a step without holding my breathe.  Hopefully that day will come sooner rather than later.

Today I go to see Elliot for another new socket. I'm optimistic that I'll be leaving his office walking pain-free.  Fingers crossed! 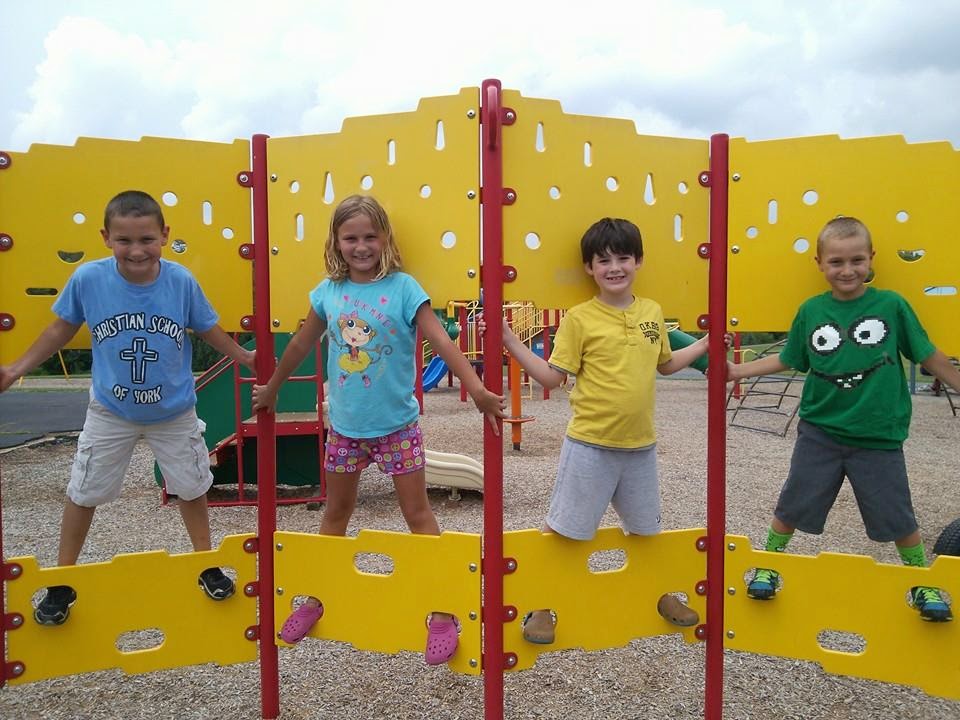