Santa came last night and, judging from the piles in front of my tree, left a sleighful.

Timmy woke up at 4 and we have been patiently waiting for everybody else to fall out of bed. I thought it was going to be difficult to keep Hamlet out of the presents, but it turns out that he is a little frightened by all of the packages. He gingerly walks around everything, avoiding physical contact at all costs. Hopefully his brother will be able to coax him onto his new train!

He hasn't touched the presents, but he did manage to find the remnants of Santa's cookies. I returned from pouring another cup of coffee and caught him stuffing the last cookie into his chubby little cheeks. 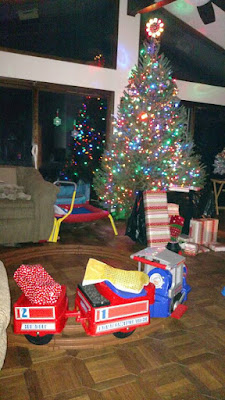 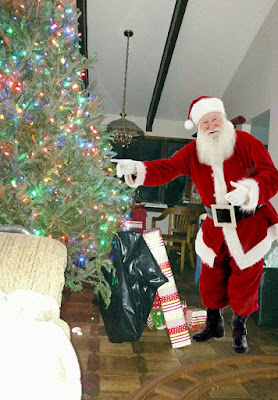 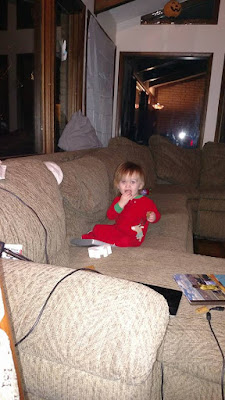 *Update 1. Almost as soon as I hit the "publish" button Timmy climbed onto his train. It is safe to say that he is a fan. 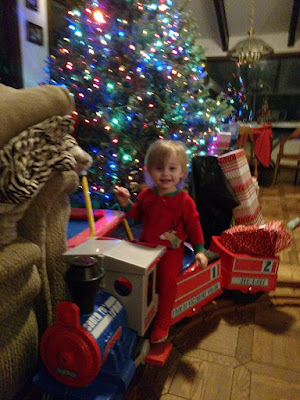 Scott and I have been together for 15 years, and during that time I have never seen him as excited about a Christmas present as he was for his gift for me this year. From the secret phone calls to slipping out of work early to accept a mysterious delivery, it is also safe to say that he has never put so much effort behind a gift. I have been intrigued so, when he announced that he had to give me my gift early due to reasons I would understand after seeing it, I agreed to an early Christmas.

He and Robby took off in the rain while Timmy and I were sequestered into the back bedroom. After several minutes and a lot of banging and commotion, he brought me into the living room. It took me a few seconds to process what I was seeing, but once it made sense I was absolutely gobsmacked.

Scott managed to purchase and secure the delivery of the love seat glider I have coveted from a small Amish store in Ohio. Every summer for the past few years I have sat in this chair, dreaming of having it in my home. I envisioned rocking Robby (and then Timmy when he was born) while reading books and watching cartoons. I never really believed that it would ever make its way to my living room!

For the first time in 15 years, Scott left me utterly speechless. Although I'm sitting in my beloved chair as I write this blog, I am still in disbelief. I don't know why Santa Scott was so good to me this year, but this is a Christmas I will never forget! 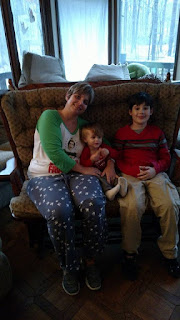 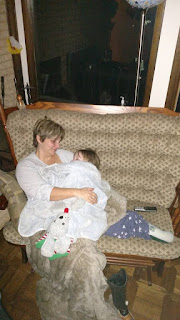 It is hard to believe that Christmas is just two days away. I feel overwhelmed by the amount of work yet to be done, but I am slowly starting to accept that much of it will not happen this year. When I do have a free moment, I find tinkering in the kitchen with Timmy and Robby far more rewarding than spending my energy decorating.

The combination of caring for a toddler and having a lot of work projects on my plate has caused my holiday decorating to be minimalist at best. We have a Christmas tree, adorn with colorful little lights but no ornaments. I meant to put them up, but never quite got around to it. I have a beautiful Christmas dishes which will remain packed up this year. It seems silly to lug them upstairs for a few days. I have enjoyed the holiday season but I just haven't been motivated to put in unnecessary housework.

Robby hasn't seemed to notice the minimal decorating. While I miss my bright and glittery festive accents, their absence hasn't impacted my spirit or enthusiasm for the holidays. Perhaps keeping my decorating to a minimum will help to ensure that my decorations don't stay out until mid-June.
at 7:39 AM No comments:

In the decade since Mr. Bill came into our lives, I have come to learn his patterns. He loves early mornings and naps every afternoon after lunch. He is happiest when working on a project, preferably when he is juggling many simultaneously. He is outside nearly nonstop during the spring, summer and fall but tends to retreat and become depressed during the winter.  The heat doesn't seem to bother him, yet he suffers with pain when the weather turns cold.

During the cold months we try to buoy his spirits by sending over care packages, dropping in frequently to visit, and checking on him regularly. Robby and Mr. Bill tend to spend their time talking and planning rather than working on a project. Despite our efforts, Mr. Bill still seems to struggle during the winter.

I'm optimistic that this year may be different.  Although we can't do anything to prevent cold temperatures and snow, Robby may have unintentionally stumbled onto the perfect winter project. He drew a blueprint for a boat the other day when he was at school, and he couldn't wait to get home to show Mr. Bill.  After patiently listening to my eager little builder's ideas, the pair hatched a plan. They decided that they would visit the local hobby shop after Christmas and purchase a model kit for a remote control boat. They are going to build it together over the winter and launch it in the lake in the spring.

Both of their faces were glowing when they conveyed their plans. Robby hasn't stopped talking about going to the hobby shop with Mr. Bill and building a boat. Mr. Bill has been looking online at different model kits and has already cleared a work space in his den for the project.  I think that building the model together might be the perfect solution for both friends!

Reflections of a Date with My 9 Year Old

Over the past few days, I have found myself thinking about my special Nutcracker date with Robby. I can't help but break into a spontaneous smile each time I think about our special night. Robby was simply charming, and his perspectives on the ballet were purely innocent and uninhibited.

We began by dining together at Cheesecake Factory which happens to be his favorite restaurant.  He practiced all of his chivalrous manners by opening both my drivers side door and the doors to the restaurant. Sporting his tux and top hat, he strutted up to the hostess and said "bon jour" in his best French accent (which is not convincing) before requesting a table for two. Needless to say, he garnered smiles from everybody.

He ordered a "man sized" milk before thanking the waitress for the bread. He remarked that the brown bread was his favorite and that he was planning on eating the entire loaf before his dinner arrived.  When she commented that he wouldn't be hungry for dinner if he ate the entire loaf, my little top hatted Koopa coyly smiled and said, "Well, that's okay. I'll take the dinner home with me and then I get to eat again. It makes coming here almost buy one get one free, which is good because it's expensive."

After dinner we headed to the ballet. Robby was awestruck by the concert hall, commenting to everybody how fancy the walls looked. As we were walking to our seats, he stopped and talked to every usher, showing off his new Nutcrackers and chit-chatting about the whether or not the gold on the walls and ceiling was "legit or fake."

We settled into our seats and Robby began talking to the man sitting next to him. He complimented Robby's attire by calling him dapper. Robby thanked him and then proceeded to have a long conversation about a string of random topics. I suspect that his neighbor was happy when the lights dimmed.

Robby's excitement when the lights were darkened was infectious. He sat on the edge of his seat throughout the first act, delighted to hear the music that he adores. Every once in awhile he leaned over to provide a comparison between the story we were watching and what happened during the Tom and Jerry version. He also provided commentary on the scenery, costumes and dancers.

During intermission we went to stretch our legs and get a drink of water. Worried about leaving his seat, Robby felt the need to inform the couple sitting next to me that we were leaving and would be right back. He also asked the stranger to keep an eye on his Nutcracker because "you can't be too careful." Covering his bases, he also told the usher of our plans and asked her to make sure that nobody stole his Nutcracker.

Robby was just as attentive during the second act of the ballet, grinning widely and applauding gleefully when the "death defying tricks" were completed by the dancers. At the conclusion of the show, he was the first to leap to his feet while clapping. He also enthusiastically screamed out "Bravo," "Bellisimo" and "Great job" before lamenting that we failed to bring roses to throw onto the stage like they do at the end of Tom and Jerry.

He couldn't wait to call his Nana as we left the performance, eager to tell her all about the show. "Nana, they played the Nutcracker music. There were people dancing, too." He also declared that he loved it, and that he wants to do it every year.  On the drive home he talked nonstop about the performance. He did mention that he felt bad for the boy dancers, because their tights were all the way between their cheeks. "Really Momom, can you believe that they didn't once reach back to pick out the tight wedgie? That means that they had a really good teacher."