Scientists have become increasingly adept at predicting both the size and the scope of looming storms. While they are not always 100% on target, their collective forecasts should always be treated with respect and with caution. Hurricane Irma has virtually obliterated the Caribbean Islands (include where Scott and I were married) and the photos that are emerging are incomprehensibly devastating.

With Texas cleaning up from Harvey, the wildfires ravaging the West and Midwest, and Irma holding Florida in her cross hairs, Dave and I wanted to provide some information about how to prepare for an emergency. Evacuating is always stressful, but the added complication of a mobility impairment can complicate the already difficult situation.

Yesterday afternoon we recorded a special edition podcast dedicated to emergency preparation for the limb loss community. From how to protect your prosthesis from water damage to safeguarding your limb from infection, tried to cover the various scenarios that may be encountered both those forced to evacuate.  Please take a look at our checklist (www.ampdpod.com) and spend a few moments preparing for the worst case scenario.

Stay safe and be prepared.
at 7:05 AM No comments:

A few days ago I received a package in the mail that both surprised and delighted me. Instead of the typical parcel of diapers from Amazon, this package was hand addressed and boasted foreign stamps in the corner. After setting Timmy up with Mickey Mouse Clubhouse and a snack, I took my package into the only private place in my home.

Standing in the bathroom, I carefully opened the package and pulled out a paperback book. I opened the book to a flagged page and was gobsmacked. The book was beautifully dedicated to me!  I was left speechless and as giddy as a child on Christmas morning.

Abby reached out to me last year when she was seeking information to develop a character for her book. I answered her questions, and we corresponded sporadically over the months. I was impressed with her questions and her dedication to portray limb loss in the correct light. The fact that she wanted to make sure that every detail was accurate and true is a testament to her professionalism.

I was happy to help her with the research because it is important that amputees are portrayed accurately across all media. In my wildest dreams, I never imagined that she would dedicate her book to me. Her beautiful description has left me dumbfounded.  In my opinion I only answered a few questions and the honor feels misplaced, but I will humbly accept the accolades.

I can't wait to read the book! 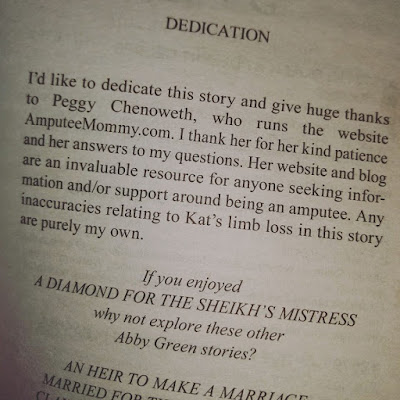 The first day of sixth grade is now in the books. No tears were shed this year, but that doesn't mean that the drive to school was void of complaining or moaning. Robby took full advantage of the drive time by vocalizing his displease with the end of summer and the beginning of a new school year.  By the time we arrived, all of my new school year blues had dissipated and I was ready for him to just get out of the car.

Although I didn't cry dropping him off, Timmy certainly had a strong reaction. He started to cry as we drove into the parking lot and had dissolved to full blown tears by the time his brother opened the door and said goodbye. No words could console my little heartbroken Hamlet. He loved having his brother home all summer and was devastated to see him leave. I tried to explain that we would pick him up in a few hours, but my efforts fell on deaf ears.  Thankfully a quick detour through the Chick Fil A drive thru helped to soothe some of his grief, and I was treated to a quiet car ride home.

After we arrived home I looked through the photos we took before leaving for school. I was struck by two startling realizations. First, Robby looked grown up. He no longer resembles the cute little elementary school boy, and he is growing into a handsome young man. Seeing him through this new lens is going to take time, but I can't deny that he is looking more like a teenager than a child.

My second epiphany was far more painful to accept. I realized that I am slowly turning into a whale. I was enormous in the photos! I knew that I had gained some weight, but I didn't realize my size until I saw the photos. I spent the majority of the morning spiraling through a tornado of self-loathing and disgust.

By mid afternoon I had decided my only option was to regain control. I popped Sweating to the Oldies into my DVD player and got to work. Timmy was more than happy to "help" me dance, and before I knew it, I was a sweaty mess and he was giggling with happiness and laughter. I was surprised by how out of shape I had become, but at least I made a move in the right direction. I know it isn't going to be easy, but with my little dancer by my side, I know I can sweat those extra pounds off! 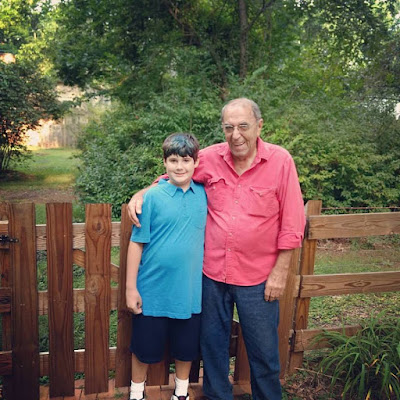 Today is the first day of school for my not-so-little sixth grader. I am having a hard time grasping that my little Koopa is no longer in elementary school. My goodness time is going too quickly.


Robby isn't delighted with our returning to the school schedule, but I think he will be happy to be reunited with his friends. I know that he has been bored the past few weeks, and some academic stimulation will be a welcome distraction. Of course, he will never admit it and spent the weekend lamenting the conclusion of summer.

Although his grade has changed, Robby will be staying in the same school for another year. We debated about sending him to the public school this year but ultimately decided that it would be better for him to keep him where he has been attending. Next year we will probably transition, but for now we are comfortable with the decision and looking forward to another year of academic adventures.

If you have been reading my blog over the years, you already know that I despise Labor Day. Even as a child, I found the notion of celebrating the end of summer nonsensical. Why would anybody want to celebrate the end of carefree and fun summer days? The advent of school, and the return of homework and after school activities do not warrant a party!

The past few weeks have been hectic with work travel and new school year preparations. I'm happy to spend a low key Labor Day at home, picking up around the house and not doing anything terribly taxing. The front yard is a mess with plastic toys, water hoses and the assorted remnants of summertime fun. Today I'd like to get the yard cleaned up, but I'm not terribly optimistic that any of us will gather the motivation to actually do it. I'm just too tired to nag, and I could use a day off. The toys will undoubtedly be there tomorrow, and maybe then I can convince Timmy to help me.

It is hard to believe that Robby is starting 6th grade tomorrow. He is excited about seeing his friends but is quick to point out that he is not looking forward to going back to class. I'm sure he will be fine when he gets back into the swing of our school year routine. This week will be rough, but soon we'll all be back on track. I do think that Timmy is going to miss his brother and the excitement of having everybody at home. I'm pretty sure he is going to be high maintenance this week, demanding constant attention and entertainment until everybody returns home.  Hopefully it won't take long for him to adjust to just hanging out with boring old Momom each day. I know I'm not nearly as funny or entertaining as his brother, but I will do my best to fill the void.

Because our grill broke, we will probably break with tradition by forgoing the obligatory barbecue and instead eat spaghetti and meatballs for dinner. I am not completely anti-tradition though; we will go out for ice cream for lunch.  Happy Labor Day, regardless of how you decide to celebrate.