Yesterday started with my being frustrated. While the fit of the socket felt fine, I couldn't 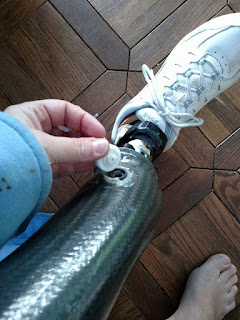 maintain suction. With each step I heard the familiar and unsettling swishing sound, reminding me that my prosthetic was not securely attached. After cursing my leg repeatedly and finally getting Timmy settled, I sat down to figure out what was going on.

It didn't take me long to figure out why I was having trouble with my leg. The valve had completely detached from the socket. Of all the possible prosthetic malfunctions, this one is perhaps the easiest to fix.  While my hot glue gun was heating, I realized that in this unique amputee situation I am incredibly lucky.

When my bi-legged friend's break a leg, they have to endure a lot of pain and visit the emergency room. They are fitted with a hot and awkward cast which becomes itchy and smelly with time. The process lasts months as the bones mend. It can be an arduous process which impacts the entire family.

There I sat, with my leg broken. I wasn't feeling any pain, and I could fix it with a little hot glue. I realized that gratitude is a matter of perspective.

School has been canceled until next Tuesday. I was so taken aback when I read the announcement text that I had to go onto the district webpage to confirm. Fortunately for Robby (and perhaps to the chagrin of parents across the county), the text message was correct.

Robby and Scott have been practically home bound since I left for New York last Wednesday. Although Scott has made a few forays to the grocery store and 7-11, Robby has opted to stay home and play with his friend. My little Koopa has been having a wonderful time playing with Jack, but both Scott and I thought perhaps a little separation and playmate variety would be beneficial. (The pair have been inseparable for over a week.) I decided it was time to plan a snow day adventure.

After making arrangements to pick up a school friend on the way, we all piled into the SUV and headed to the trampoline park. Robby's complaints about leaving Jack quickly stopped when he saw his friend Jenna come running out of her house. Within minutes of securing our wrist bands and donning the special trampoline socks, everybody was happily hopping.

We all jumped and played for almost three hours. Timmy was especially active, gleefully spending his time bunny hopping among the trampoline squares and giggling. Scott even got into the action, showing off his jumping skills and "old school tricks."

The kids were so impressed with Scott's acrobatics that they begged me to make a video. I'm glad I did, because I was able to catch this memory forever.  So much for bragging about his trick skills.

(Please know that only his pride was hurt and continued jumping for another hour after this was filmed.)
at 6:11 AM No comments:

'Not So' Welcome Home

As I was driving home yesterday, I began to imagine my reunion with Robby. I smiled thinking about my little Koopa running into the driveway (probably wearing his cowboy boots but no coat) and wrapping his arms around me. He would smother me in kisses and frantically begin relaying all of his snow adventures since I left. I envisioned him cuddling with me in my rocker, reminding me how happy he was to have me home and constantly telling me that he loved me. By the time I turned onto the narrow albeit passable driveway, I had resigned myself to his sticking to me like glue for the next few days. To be honest, the prospect made me smile.

After navigating the driveway, I prepared myself for my running Koopa kisses. I opened the car door, thinking that he was waiting to see me before making an entrance. After standing in the driveway for a few moments and longingly looking at the house, I figured that he was probably in the bedroom and didn't know that I had yet arrived. I decided to beep the horn several times to announce my arrival.

As I was releasing Timmy from his car seat, Scott came outside to greet us.  Timmy ran into his Daddy's arms, squealing with delight. Feeling a tinge jealous that he received the welcome that I had been envisioning, I asked about Robby.  He knew that I was coming home, but opted instead to go play at his friend's house.

I'm delighted that Robby has a close friend living across the street, but I was disappointed that he didn't want to stay to see me when I came home. This was just another example of his growing up and while I know it is inevitable and natural, it doesn't always make me happy.  Undeterred, I texted the neighbors to ask them relay the message to Robby that I was home. I knew that it was a Hail Mary, but I was hoping that perhaps he would abandon playing for a moment to come bounding home to greet me.

After a few minutes of waiting, I received a text in return. "Robby says hi. He is busy with a game and says he will see you when it gets dark. Welcome home btw."  So much for my visions of being missed!
at 7:33 AM No comments:

After being away from my home for a week and housebound at my Mom's for the better part of five days, I think I'll be able to return to Virginia today. The main roads and my Mom's driveway are finally cleared of the imposing mounds of snow and ice. It has been nice visiting for so long, but I'll be happy to return home. I wasn't expecting to be staying so long.

Scott has worked tirelessly to clear our driveway of snow. We have a plow on our lawnmower and he made several swipes during the snowfall to try to keep up with the accumulation. Unfortunately, when 30 inches of snow falls you simply run out of places to put it all. He managed to clear a path 75 inches wide (after googling and confirming that the width of our SUV is 73 inches). It is definitely going to be a tight fit!

Wish us luck driving home!
at 7:31 AM No comments:

Friday morning I woke up in NYC, spinning from an exciting albeit exhausting adventure. Part of me just wanted to lounge in the large hotel room bed, commanding the remote control while sipping coffee in peace and quiet.  The prospect of not having to watch Teen Titans or Thomas the Train was definitely enticing.

It seemed that every television channel (not dedicated to cartoons) was relaying the same story. A snowstorm was approaching, and it was going to be big. I put my desire to pamper and relax to the side and quickly packed my belongings. I hurried to the train station and changed my ticket so that I would arrive at my Mom's before the flakes began to fall.

Although I was sad leaving the city prematurely, I was happy with the decision. To say that the snowstorm was "big" seems to be an understatement. My Mom was walloped with 30 inches of snow, a record in her area. Seeing the snow pile up so quickly was amazing to watch!

The fact that I wasn't forced to shovel the snow made the blizzard more enjoyable. Because of the organ prolapse, I'm restricted from lifting and bending excessively. (Perhaps this is the only benefit of the diagnosis!)  My sister had to take the lead with the shovel while I was relegated to cheerleader. She was able to clear much of the driveway and the sidewalk, but the piles from the snowplow were simply too much for her to move.

Wanting to contribute to the snow removal efforts, I contacted a local friend who runs a plowing business. He is coming today to finish the job so that we can exit the driveway. Sometimes, it is just worth it to pay a professional. 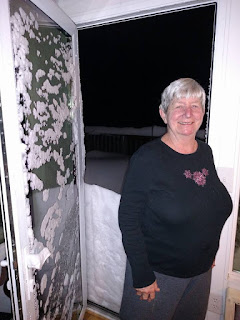 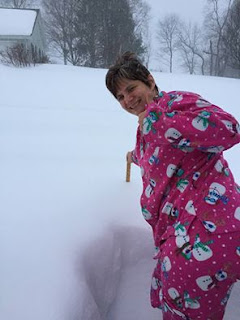