Yesterday Robby, Timmy and I returned home after nearly a week away. What started out as a quick trip to clear my mind and escape my funk morphed into a mini camping vacation. A few days away and a mini adventure was just what I needed to recenter myself and to feel happy. I feel like myself again.

Jack moves on Sunday, which is inevitably going to sadden my little Koopa. Although their friendship has been stormy, Robby has thoroughly enjoyed having a buddy across the street. I talked with him last night about his feelings concerning the move. He claimed that he was sad but okay because he is optimistic that another family with a child or two will move into the neighborhood. He also suggested that I was taking the move harder than him, which is probably true. Perhaps I need to follow his lead and stop projecting my memories of my friend moving away onto his experience.

Despite his insistence that he is fine, Scott and I are planning on keeping Robby busy over the next few days. Sunday we are driving a few hours to attend a memorial picnic for a dear friend's husband. He doesn't know yet, but Monday we are leaving for our family vacation. (Thanks again to my sister who has stepped up to fill the role of cat and house sitter while we are away.)


In the meantime, I am going to try to disguise my feelings about the move. If Robby isn't devastated, my insinuating that he should be might be enough to introduce emotions. I'm going to remain silent on the topic while letting him know that we are both here if he wants to talk. Hopefully he will handle this change with more grace than me.
at 6:34 AM No comments:

I used to enjoy meandering through souvenir shops after a trip, searching the aisles trying to find the perfect memento. Traveling with children has definitely changed my perspective on those quaint little shops. I don't think that there is anything that brings out the greed in kids than aisles of cheap junk and plush animals. After spending an insane amount of money on the trip and experiences, the fact that I am somehow obligated to provide a parting gift is frustrating.

Fielding requests from all of my little campers, I finally acquiesced and agreed to purchase one souvenir per person. My only request was that the gift needed to be no more than $10.  Everybody agreed that my price was fair and they took off into the store on their quest.

Three of the four quickly picked an item and brought it to me for approval. My oldest nephew had his heart set on a pocket knife behind the glass case. I explained that he had a $10 limit, and also reminded him that I do not buy knives for kids. He broke down in tears in the middle of the store. As his tears flowed, I held my ground that I don't buy knives. I reminded him of his $10 limit and suggested that he search the plush or cup aisle.

His tears quickly morphed into a full blown meltdown. After 40 minutes of reminders and offering suggestions and comfort, I told him that we were checking out. He had until I reached the cashier to pick an item. If he didn't, he would get nothing.

He remained in the center of the store, huffing and crying about the pocket knife. (I received sympathetic and understanding looks from every shopper with a child.) I felt badly not purchasing him anything, but I did not want to reward his outburst. After all he had ample opportunity to pick an item. He chose to use his time to cry and throw a fit. This was not a nice way to end a wonderful adventure!

Eventually he moved from the store to the front porch of the Ranger Station. Slowly he seemed to recover from my perceived cold-hearted denial and began to play with everybody else. His smile wasn't as broad, and I glanced a few glares being thrown in my direction for the rest of the afternoon. Hopefully this will not be his only memory of our trip, because with the exception of this meltdown we had a wonderful time!

I can say that after yesterday's souvenir shopping drama, I have declared that Aunt Peggy's Adventures will no longer include a trinket shopping opportunity.
at 8:00 AM 1 comment:

The kids had the time of their lives running around the campground.  They all participated in activities and made new camping friends.  (I could hear Robby laughing on the jumping pillow from the cabin, which is situated down a hill and in the woods.)  I love seeing them all so happy and busy.  But like all good things, our Jellystone adventure is coming to an end.  Today we pack up and head back to my Mom's house.

I know that the kids will be sad to leave, but I have to admit that I'm ready to go home. These kids have been exhausting!  Yesterday I logged 22,000 steps walking around the campground to keep tabs on everybody. I am also missing my Timmy, who has been enjoying some alone time with Nana.

I took scores of photos which I will post in the next few days. WiFi at the campground is wonky and uploading takes an inordinate amount of time.
at 7:06 AM No comments:

My sister's kids have wanted to visit Jellystone for years. I toyed with the notion of taking them for a night, but when I found a Groupon I knew I had stumbled upon our next adventure.  We are staying in a cabin (air conditioned with a full bath because I don't enjoy roughing it) until Wednesday.  All of the kids (minus Robby who knew about the plans) burst into tears when they arrived and realized that we were staying.

My Mom and I packed and meticulously planned for this surprise.  We packed their clothes, fishing poles, sleeping bags, favorite stuffed animals and a carful of food without their knowledge.  My Mom even bought them all underwater digital watches so nobody missed an activity.

Jellystone is more than the typical campground.  They offer an amazing variety of structured kid-centric activities every hour throughout the day. Yesterday my nephew's played in a laser tag competition while Robby and Tiffany competed in the pool game Olympics. In the evening we all went to play Bingo (Robby triumphantly won a round.)

Today is chocked full of activities and adventures.  It will be hot, but hopefully the thunder storms will stay away.  I think it is safe to say that I knocked this year's Aunt Peggy Adventure out of the park! 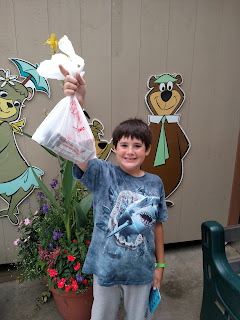 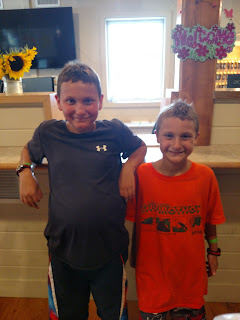 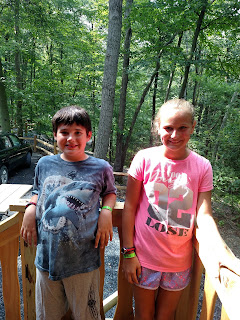 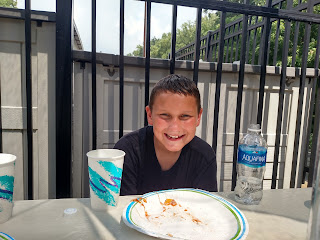 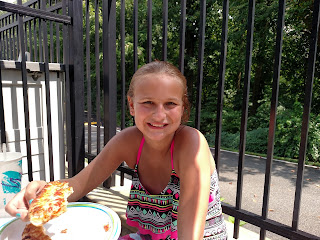 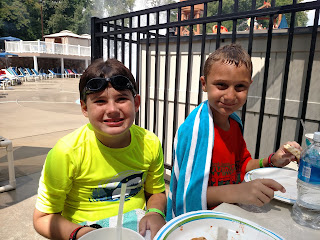 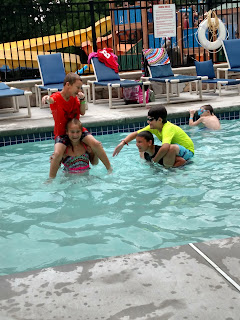 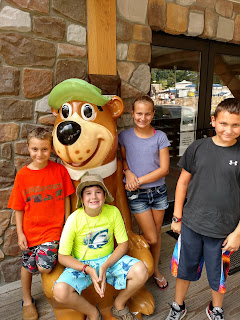 In a quest to snap out of my funk I packed up the boys and headed to my Mom's for a few days. I was hoping that the change of scenery and routine would help me to recenter. I was right, and I'm happy to report that I'm feeling much better. I also want to thank everybody who has supported me over the past week. The messages of love and support have been overwhelming and have helped to lift me out of my hole.

This is the beginning of a new week, and I'm going to make it a good one.  Today I'm taking Robby and his cousins on an adventure. Aunt Peggy's Adventures have become legendary with the kids and they look forward to them every year. (I think my Mom appreciates them as well because I keep the kids occupied and away from her house for awhile.)  They never know the adventure plans ahead of time because I quickly learned that the surprise factor helps to make the experience more special.

Last year we took the train to Philadelphia, where we toured the sights on a double decker bus. We went through Eastern State Penitentiary, which is touted as one of the top five most haunted locations in the country.  From start to finish, I tried to make every aspect of the trip special and memorable. The kids are still talking about our trip to Philly.

To be honest, it is a lot of pressure to keep devising adventures that will leave them both delighted and awestruck. This year I think I managed to come up with an itinerary that will make our Philly trip pale by comparison.  Stay tuned for updates about Aunt Peggy's Adventure 2016.  (I don't want to let any details slip on the off chance that they are reading this blog for clues.)  At the risk of sounding cocky, I'm fairly certain that this will be the highlight of their summer.
at 6:35 AM No comments: