A few weeks ago I received an email from the editor of inMotion, asking me to provide a photo for a cover story about parenting.  Since he was specifically looking for a photo of us in a classroom, we jumped into the car and headed to Robby's school.  Scott snapped a few quick photos and decided that we probably had something that was "good enough" before heading to IHOP for breakfast.

I never envisioned that one of our quickly staged photos would be selected for the cover photo. Had I known I was going to be on the cover, I would have put on make-up and a bra.

I am desperately trying to suspend all self-criticism concerning my image, but I find it difficult to look at the cover with completely objective eyes. I am accustomed to putting myself through brutal critiques, beating myself down until I can't find a single positive attribute. I realize that this is not a favorable trait and I am actively working on becoming less critical.

So rather than pick myself apart, I am going to celebrate this amazing honor.  I am absolutely tickled to be featured on the cover of this issue of inMotion magazine. Who would have thought that I would be a Cover Girl! 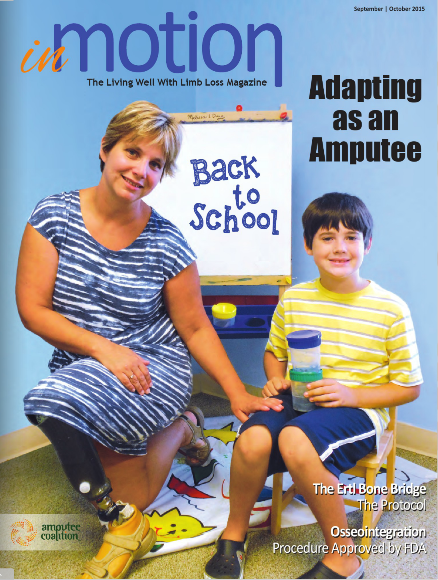 Yesterday morning, after dropping off Robby at school, Timmy and I headed into DC. Taking a toddler with me to congressional meetings was obviously not ideal, but my lacking a babysitter made his accompanying me a necessity. I tried to rationalize my sidekick by reminding myself that I was representing only my own concerns and that my need to keep up with a mischievous toddler was my personal reality. Unwilling to reschedule or cancel my meetings, I dressed him in his cutest patriotic outfit, grabbed a new bag of goldfish crackers, and decided to make the best of a less-than-perfect situation.

My little Timmy took his lobbying adventure in stride. He was charming and endearing, smiling and giggling almost on cue. Only once did he take off sprinting down the long corridor, squealing at the commotion he was causing. I tried to let him out of his stroller between appointments and he happily played with his blocks and munched on goldfish when I was in a meeting. He was covered with crumbs by the time I put him back into his car seat to go home, but he was also smiling from ear-to-ear.

My meetings went well. I can't say that I changed the world, but I definitely feel that I was heard. I spoke from my heart and from my own experience, relaying my future if my prosthetic care were dictated by the medicare proposals. The staffers were engaged throughout my meetings and asked questions that indicated that they were actually listening to my concerns. Hopefully our visit helped to move the needle on this issue, but at the least I know that I did my part.

It is imperative that everybody take the responsibility to advocate on this issue. Please don't wait for somebody else to fight this battle. If we are silent, we will lose and prosthetic care will return to the disco-era. United Healthcare, a private insurer, already indicated that they are incorporating aspects of these horrific proposals into their policies.

I don't consider myself an advocate, but I am willing to try because I feel so passionately about access to quality prosthetic care.  I think that too many people are afraid to make the calls to their elected officials because they are intimidated by the labels. I never envisioned that I would be going to Capital Hill to fight for prosthetic access, and I was definitely pushed outside of my comfort zone by going. However, I learned that it wasn't nearly as intimidating as I envisioned. In fact, it was so easy that a toddler could do it!

Yesterday I took Timmy to the bounce house before picking up Robby from school. I was determined to tire my little Hamlet out, hoping that he would sleep soundly through the night. He had a blast, squealing and laughing the entire time. Before I knew it, we had played and bounced for almost an hour and it was time to pick up Robby.

My tucker out Timmy plan didn't work as expected. I was exhausted while he was thoroughly revved up. He ran around the house all evening, squealing and pushing the limits. Of course I had a hard time keeping up with him because I had bounced for an hour.

I finally just gave up and let him play with a roll of toilet paper. I figured that sacrificing a roll was worth the quiet time I was afforded. In a moment of sheer parental brilliance, I bribed Robby with a milkshake to pick up the scraps after his little brother went to bed.

I was hoping that the moon bounce excitement would catch up with my little guy, allowing him to sleep beyond 4 AM. Yet again, I was wrong and he was jumping around his crib ready to play at 3:50 this morning.  Bouncing may not have impacted his sleep schedule, but it certainly wreaked havoc on mine. I fell asleep sitting in my rocking chair at 8:30 last night.

I was proud of the response from the amputee community to the detrimental medicare proposals. Not only did we obtain the necessary 100,000 signatures in 17 days, I later learned that ours is the only disability-oriented petition to reach the signature minimum. We are anxiously awaiting our response from the White House but I have been warned that it could take up to six weeks. I have to admit that I worry that by the time a response is issued, the medicare committee may have already come to a decision.

The petition, the letter writing campaign and the #NotALuxury movement all worked to rally the community, but the work is not done. Dave and I recorded another episode of Amp'd to provide step-by-step instructions about how to continue to press this issue. The community must continue to press this issue, and right now the most advantageous routes are through the media and through our elected congressional officials.

I took advantage of my proximity to Washington DC and requested appointments with my legislators. I am definitely going outside of my comfort zone, but I believe so passionately in this issue that I am willing to try.  I'm nervous but excited about this advocacy opportunity.


powered by podcast garden
at 6:01 AM No comments:

For the past 14 years  Labor Day always heralded the beginning of the school year.  This year local schools received a "Kings Dominion Law" waiver and started classes last week. Even though both Scott and Robby have a week of classes under their belts, I plan on spending this Labor Day in our traditional manner.

The lazy days of summer are over and it is time to get ready for Fall.  Today I will be scurrying around doing laundry, shopping for last minute school supplies and trying to get all of our school time ducks in a row.  We won't be attending any pool parties or picnics, but I'm not a total Grinch.  I made potato salad, and we'll throw some burgers on the grill for dinner.  I figure if I serve dinner on paper plates, it kind of counts as a picnic.