While Scott and Robby continued their European adventure with trips to Omaha Beach and the American and Canadian cemeteries, Timmy and I had our own fun. He was ecstatic to go fly at the indoor skydiving center. I thought he might be nervous doing it by himself, but he tackled it like a seasoned pro. He had an absolute blast!

He had so much fun that we signed him up for "flight school." He is going to go back to learn how to do the tricks in the wind tunnel. After watching the instructor perform his tricks, Timmy is determined to walk up the side of the tunnel like Spiderman.

I'm not sure what we are going to do today, but I'll try to come up with a fun distraction later in the afternoon. I'm sure I'll think of something! 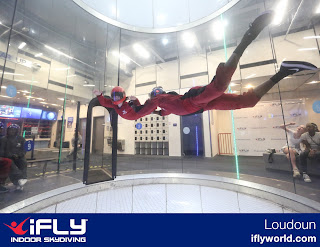 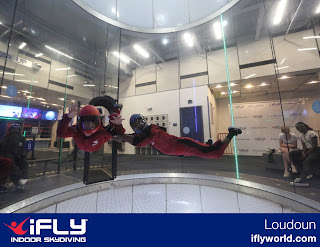 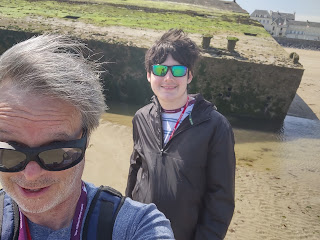 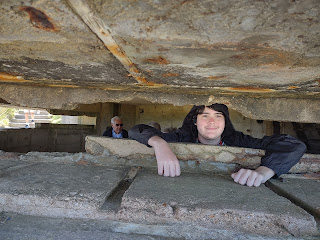 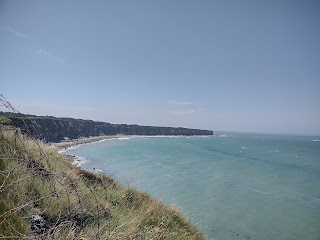 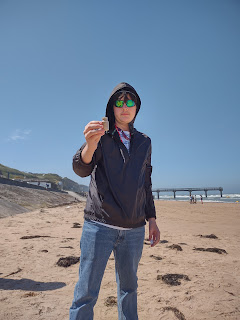 Yesterday Robby and Scott visited Utah Beach and Sainte Mere Eglise. Robby has been looking forward to seeing that church for years. I was so happy that the pair video chatted with me in front of the spire. Seeings Robby's bright smile and the excitement in his eyes made my heart leap.  They are having the time of their lives.

Timmy and I have been having a nice week. Yesterday we played outside for several hours and I made his favorite dinner. It was laid back but, after traveling to and from his Nana's, I think he needed some downtime.

Today will be considerably more exciting because he is going to iFly. He flew a few years ago with his cousins and had a blast. Every time he sees the commercials on television he asks to go, so I figured this was the perfect occasion. Pics to follow soon! 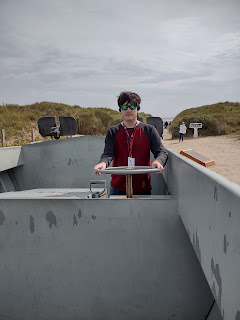 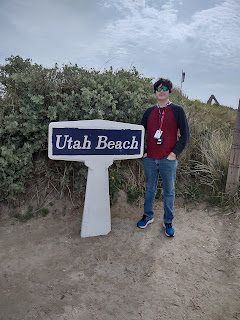 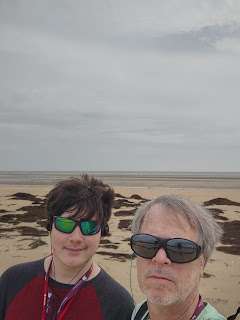 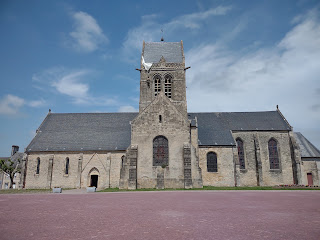 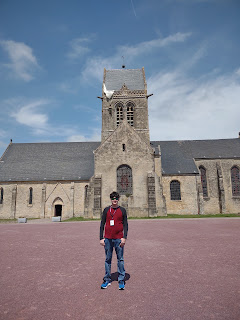 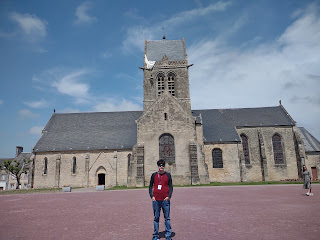 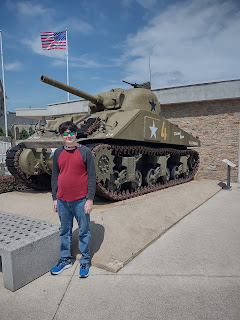 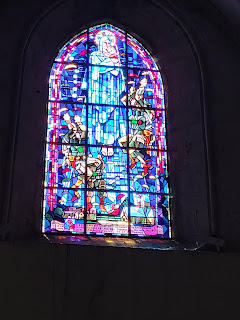 Although I wish I were with them, I have been thoroughly enjoying receiving the updates and photos from France. Robby and Scott are having the best time. There smiles are so bright I can almost see them from Virginia!

Yesterday they arrived in Normandy. After settling into their hotel, the pair walked down to Gold Beach before dinner. Today they are heading to Utah Beach and Sainte Mere Eglise. Visiting that church is the top item on Robby's bucket list. I feel like an excited child waiting for a photo of him living his dream.

While Robby and Scott are on their adventure, Timmy and I are back in Virginia.  I'm not sure what we are going to do today, but I want to do something fun with him. He has not displayed any jealousy about his brother and dad being on a monumental adventure, but I want to have a special week with him.  He deserves a quality week as well.

Thankfully Timmy is relatively easy to impress. Yesterday he had McDonald's fries twice, which elevated the date to "the best day of June." I love that he has such a low bar for delight! 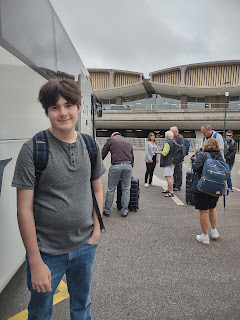 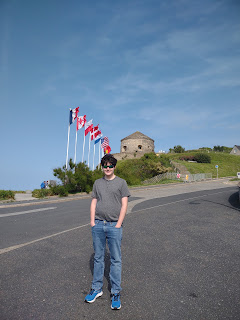 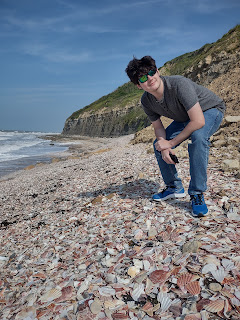 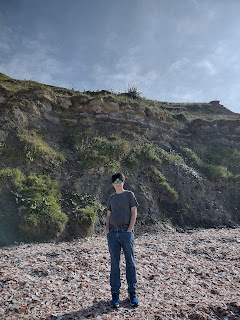 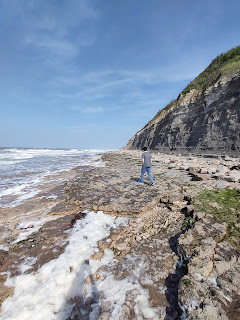 Robby and Scott are off on their epic adventure. On Friday afternoon I drove them both to the airport, kissed them goodbye and watched them walk into the terminal towards their plane to France. They were simultaneously giddy and nervous about their trip.

After I dropped them off, Timmy and I continued to drive into Philadelphia. We met my niece and my sister at a hotel in the city. Timmy was over-the-moon to have a hotel adventure of his own. We spent the evening walking through Chinatown and getting something to eat. After a long day of prepping, packing and driving, we all ended up going to bed early.

On Saturday we surprised Hamlet with a trip to the Van Gogh Immersive Experience. (Timmy loves Starry Night so I knew that this adventure was perfect for him.) He had a lot of fun exploring the exhibits and creating his own Starry Night masterpiece. We returned to my Mom's house on Saturday evening, happy but tired. On Sunday we took Friend to the local dog park. It was fun watching our little pup run and play with new canine buddies.

Today Robby and Scott will step onto the beaches of Normandy France. When I think about Robby walking on the beach I get chills. This has been his dream for many years, and I become emotional when I imagine it coming true. I know that they are going to have an amazing time!

While they are stepping back into history, Timmy and I are heading back to reality. We are going to pack up and head back to Virginia for the rest of the week. I have a lot of work to do so I don't think my week will be nearly as exciting as Robby's. Of course, I do have a few surprises planned to keep Timmy both happy and entertained during the week.  Stay tuned! 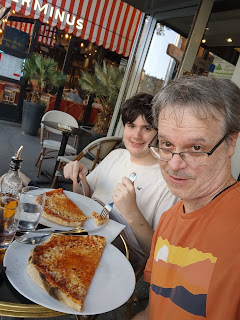 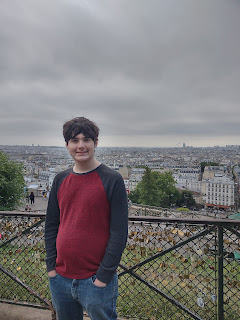 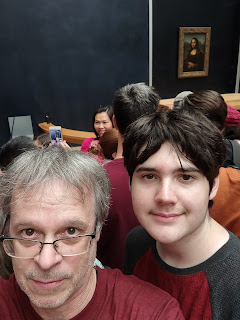 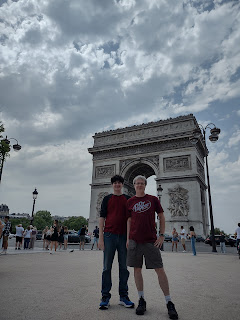 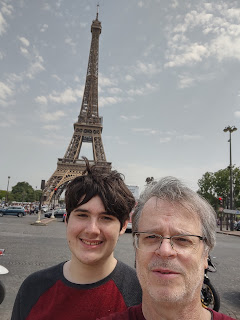 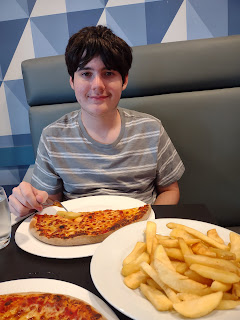 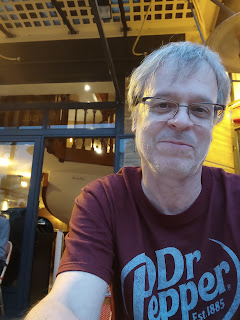 I didn't realize how much we needed to add Friend to our little family. Every one of us, including Robby who is a professed cat person, has developed a special bond with Friend. I find it interesting to watch Friend morph into the version of the pup preferred by whoever is with him at the moment. He wants to please and, with one glaring exception, he is the perfect puppy.

I researched extensively, but somehow I failed to appreciate the hunting instinct of the spaniel. Friend is a quiet little cuddle pup inside the house, but as soon as he steps into the fresh air he turns into a monster killer. He pulls on his leash so aggressively that I upgraded for fear that it would snap. He leaps at the base of trees in an attempt to snatch a squirrel. Bugs, frogs and snakes have all become victim to my little killer.

Yesterday I was walking Friend in the early evening, trying to enjoy some quiet time before the chaos of packing commenced. Usually he meanders, but this time Friend walked out of the woods and straight to the front door when he was done. He forgot about his treat and walked directly to my bedroom.

I didn't think much of it at the time and proceeded to clean up the kitchen. After about 20 minutes I walked to the bedroom and I saw Friend in the middle of the floor. He was sitting over something red, yellow and green. It took me a few seconds to connect what I was seeing. When the connections were made, I froze and screamed at the top of my lungs. (Freezing, screaming and peeing my pants seems to be my fight or flight response.)

I began to wretch as Robby discarded the carcass. I had trouble looking into Friend's eyes for the rest of the night.

The boys leave in two days!  With the level of excitement in this house I'm not sure if anybody will be able to sleep until they take off. I'm going to miss them, but I know that Robby and Scott will be having the time of their lives. I can't wait to hear about their adventures. In the meantime, I'm going to concentrate on making some memories with Hamlet.

I am going to take advantage of the solo time with Timmy by curating activities specifically for him. He will have my undivided attention and, even though he won't be in Europe, I hope he will have as much fun. My mind has been in vacation planning overdrive as I have tried to organize the trip for the boys while planning adventures for Hammy.

Another day of planning has begun.

While all the boys are enjoying their summertime schedule, I feel like it is kicking me in the rear. In order to get all my work done and have time to play during the afternoon I have been waking up early. By the time they roll out of bed at 10 I have already logged nearly 5 hours. Hopefully my body will adjust quickly. I'm exhausted!

Today we are going to have rain throughout the day. I woke up early to play through the afternoon but I don't see that happening today. I have a feeling that the boys will have to be content with indoor activities, which usually means computers and copious amounts of snacks.

Slowly over the years our bedroom sitting room has been transformed into a computer lab. Scott, Robby and now Timmy have designated desks with their assigned computers. With three desktops humming and mouses clicking, I don't spend a lot of time in the room anymore. Three desktop computers make a lot of heat and a lot of noise.

Yesterday all of the boys were busy playing their respective games when Timmy suddenly became upset. (He wasn't in a full-blown gaming rage, it was more sad and disappointed.) It took a few moments to get him calmed down, but I finally learned what happened. He was playing a burger restaurant game because he enjoys creating new menu items. Somebody came into his restaurant and ordered a burger with 10 boxes of cheese. (Apparently that was an important detail.) As he was unwrapping the cheese and putting it on the burger, this character took all of his cash.

Upon hearing about the incident, Robby quickly logged off his game and hopped onto Timmy's game.  Within a minute Robby had the assailant identified and isolated. He logged into the same game server on his own computer and, working with Timmy, they managed to recover everything within 90 seconds. I have a feeling that Robby will always be Timmy's protector.