When Robby was a preschooler he loved riding his little bike. He would tool up the driveway and over to visit Mr. Bill without much thought or effort. One day he overcompensated when steering and rode his bike right off the rode, falling into a fully bloomed blackberry bush.

I vividly remember picking him up and consoling him after his first little bike tumble. After his tears were dried, he proclaimed that he would never ride a bike again. "If I was supposed to ride I would have been born with wheels instead of feet." Even at three years old he was incredibly logical!

Robby was true to his word and has refused all attempts at bike riding. Both Scott and I have tried every summer to entice him back onto the saddle, but our efforts were in vain. In his mind, his fall five years ago has grown to epic proportions, with the injuries sustained nearly debilitating. In reality he was fine after a Snoopy Band-Aid and lollipop.

We never gave up on his learning how to ride, but we did make the decision not to push the issue. We figured that peer pressure would run its course and that he would someday want to learn so that he could keep up with his friends. If he were never motivated to learn how to ride, it would be okay. Regardless of what happened, we decided that we needed to stop making bike riding an issue because our encouragement was only making his refusal stronger.

Two weeks ago Robby pulled Scott into the kitchen for a "private conversation." After a brief talk, the two were out the door in a flash. I wasn't sure what was going on, but I could tell by the excitement in the driveway and the smile on Scott's face that it was big news.

I looked out the window and was shocked to see Robby sitting on a bicycle. Considering that just a week earlier he referred to the same bike as a "two wheeled death trap," I was astonished by his change of heart. I'm still not sure his motivation, but he has been dedicated to learning.

It took a few days of practice, but my little Koopa is now officially a bike rider! His smile is so large and bright whenever he is riding that I can tell that he is proud of his accomplishment. I have a feeling that he is going to relish the freedom that riding his bike affords him in the coming months. 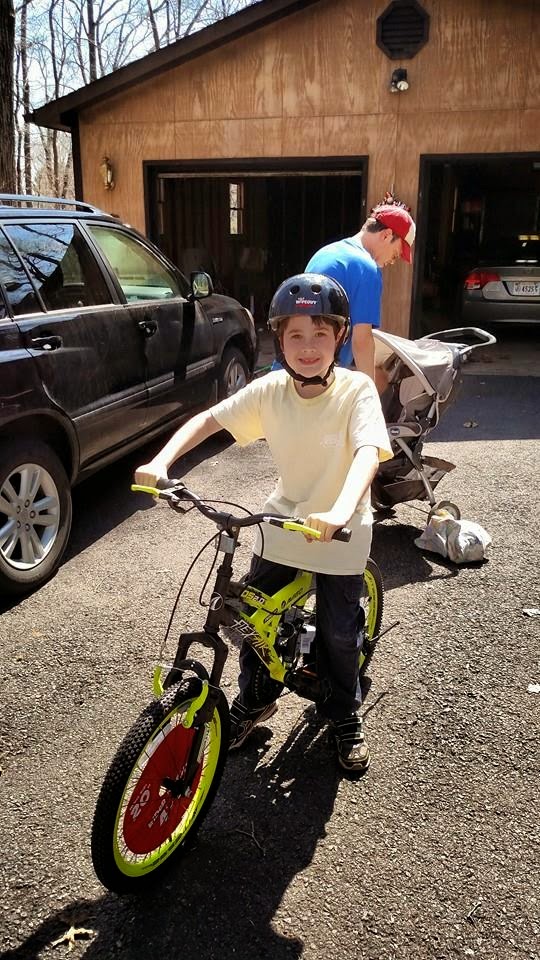 Lately I have been feeling lost and overwhelmed. Some days I feel as if I am lost in a mirror fun house desperately trying to find an escape while I keep running into walls. Thankfully my escape arrived yesterday in the form of a visit from a friend.  I was delighted to see Pennie and her little girl. Being around happiness was just what I needed to lift my mood!

My friend Pennie lives in California, so when she emailed me a few months ago to let me know that she was coming to the area, I was overjoyed. I was planning on driving to meet her, but she graciously offered to drive to my house instead. I felt guilty accepting her offer, but I also realized that I was teetering on the brink of exhaustion and avoiding the drive would probably be for the best. It isn't easy for me to accept favors even from friends, but I am trying to push myself out of my comfort zone by admitting that sometimes I need help. I figured that accepting Pennie's offer would be a good place to start.

I don't know why I don't get together with my friends more often. I always feel so much better after some quality time talking, laughing and sharing. I love my husband dearly, but he is a man and sometimes he just doesn't understand. I have come to accept that there are some things that are best understood by friends rather than spouses.

It has been far too long since I've given myself permission to just relax and enjoy the day. I am typically running from project to project, leaving myself barely enough time to breath. Yesterday was one of those rare occasions where I just let go of the to do list and the stress of the recent weeks and just spent time with a friend.  My house is cluttered and I still have a mountain of work ready to be tackled, but I feel more centered and ready to plow through the piles.

The turmoil of my Dad's illness and subsequent death, as well as the ensuing funerals, has waned giving way to a new normal. I feel overwhelmed when I remember that I can't just pick up the phone to talk to him, so I have been trying to keep busy so that my mind doesn't wander. Yesterday was the first day back to "normal" and I spent the majority of my time working and cleaning, both of which were neglected during the past week.

Although my house is extremely cluttered, I began my morning by cleaning out the car. We spent a lot of time traveling during the past week and the car has become a catchall for trinkets, toys, bottles, mail and assorted trash. Taking the time to clean it out and to stow the funeral pamphlets and pins in a safe location, but out of immediate site, was refreshing. After all of the accumulated "stuff" was purged, Timmy and I drove to the car wash so that we could have a fresh start.

Between cleaning the car and catching up on work, I didn't have a chance to tackle the inside projects. My house remains a minefield of toys and clutter, all of which will have to wait for another day. Today I am driving to Baltimore for some much needed friend time. There is so much that I should be doing, but I really feel like I need to unwind and take some time for myself.

With my headache finally gone, I feel like I am able to concentrate enough to write about our Easter. Because of the extensive traveling we have done and the passing of my Dad, this year we kept the holiday relatively low key. I don't think any of us felt celebratory, but I still felt the need to make the day somewhat special.  In retrospect the boys would have been just as happy ordering a pizza and watching hockey on TV in lieu of a proper holiday dinner.

This was the first holiday that Robby has indicated doubt concerning the legitimacy of the magical visitors. My first clue was his putting the Easter Bunny in air quotes whenever referencing him. After I ignored the air quoting, he finally just said, "Momom, I don't think that the Easter Bunny is real." With that statement my heart sank. Doubt is the first step towards full blown discovery, and I know that it will probably happen quickly.

I decided to put the onus for discovery on Robby. His starting to ask questions is an indication that belief is waning, but I am in no hurry to speed along the process with a full confession. Instead I just shrugged and explained that it is up to him if he wants to believe.

He didn't really talk about the Easter Bunny again until Saturday night. We were still at my Mom's and he asked where the Easter Bunny would leave his treats. We explained that the surprises would probably be left at our home. He smirked and said, "Well, then I guess I'll be able to tell if this (imagine air quotes) Easter Bunny is fact or fiction because you and Dad are here at Nana's with me."

In that moment my mind began spinning through different scenarios to put out his treats and hide the eggs without his noticing. Sometimes the best solution is the easiest. I called Mr. Bill who spent Easter morning hiding our eggs and presents for the boys.

Robby was flabbergasted when he came home and spied an egg by the fire pit. I could see him trying to process how the eggs were hidden when we were all together two states away. The confusion quickly gave way to a huge smile. It was almost as if I could see the belief filter back into my little Koopa.

He may not believe for much longer, but we made it through one more holiday with the magic intact!

I was planning on writing about our Easter in today's blog.  Unfortunately I am forced to surrender and wave the white flag for the day.  I don't succumb to headaches often, but when I do they are typically migraines.

I'm off to bed, where I will hopefully sleep and regain my bearings.  Thankfully Scott and Robby are still home on Spring Break.  While I feel a little guilty knowing that their final day of freedom will be used wrangling Timmy, I also know that I need to take care of myself.

Hopefully I'll feel better in a few hours and will be able to resume to normal tomorrow.
at 8:17 AM No comments: