Everybody is home again today. This time the closures are due to cold temperatures rather than snow, but either way the boys are delighted. Robby is a tinge disappointed that we have already deferred his going outside in the "Martian air" until it is a little warmer.  Hence the ensuing argument over whether or not it would still be "Martian air" when it warms up a little.  Instead of plunging directly into the arctic blast, I kept him inside by making cinnamon rolls and bacon for breakfast. As soon as the bacon aroma started to waft into the living room, my pouting little Koopa changed his tune.

While I know that Robby will go outside, if for no other reason than to say that he did, I am going to keep everybody inside for the majority of the day. If schools are closed because of frigid temperatures, I can't think of a good reason to go outside.  Instead, I would like to stay inside, warm by the fire, and train Timmy for the Diaper Derby..

I don't really know why, but I have always wanted to have a child participate in a Diaper Derby. The prospect of having a bunch of babies lined up and crawling towards a finishing line has always seemed amusing. I signed Timmy up as soon as I saw the advertisement for the Diaper Derby this Saturday. (I learned through Robby how fleeting these stages can be and that I shouldn't delay.)

I have no aspirations of his winning, but I am looking forward to the experience and snapping a cute video (which will of course be posted in this blog). Timmy is fast though, especially when he is motivated. The Official Diaper Derby rules state that we can bring a motivating object/ toy to encourage the baby to craw to the finish line.  I'm thinking of bringing the electric blanket. Nothing makes him dart across a room quicker than when he sees access to the shiny white cord!
at 7:36 AM No comments:

Last year at this time I was bombarded with medical tests and screenings because of my "advanced maternal age." I still resent the label, but lately I've been worried that it may be rearing its head. Last night during dinner, Robby complimented me by calling me a "living artifact."  Apparently having survived a childhood without a remote control television, gaming system and cable TV qualifies me.  While I know that he did not mean it as a negative, I couldn't help but feel that perhaps it is becoming true.  After all, I'm always tired!

Realistically I know that my age is not my only factor contributing to my fatigue.  After all, my body is still recovering from two major surgeries. (I figure that I can rely upon this excuse until the first anniversary of my last surgery. After that time, I'm probably going to just have to admit that I am out of shape.) I am also working, managing home and school activities and worrying about my Dad. In short, I'm juggling more balls than a carnival performer.

Although I have a lot of reasons behind my fatigue, I would be remiss if I didn't reveal what is probably the primary factor. It only took a day or two for Hamlet to emerge from a timid crawler into a curious little mover. Having fully mastered the technique, he has been moving non-stop ever since! I don't remember Robby being this active, but I'm sure he was and I have just blocked it out. Of course it has been nearly 9 years since I was last chasing around a crawler, which brings me back to lamenting my age. 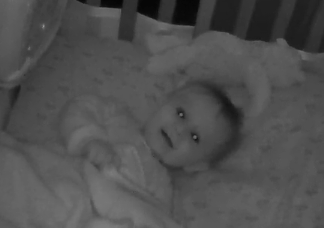 exhaustion at night. While I try to encourage naps, they are both fleeting and few. As soon as I put him down, his tired little eyes perk up and he a huge smile washes over his pink cheeks. He's happy, which definitely is his saving grace during his middle of the night play sessions.  I'm told that he will outgrow this stage. Needless to say, I'm still waiting. In the meantime, this artifact Mom will just keep the anti-fatigue wrinkle cream slathered and the coffee flowing.

Yesterday's snow was lousy for snowballs but perfect for sledding.  It took a few turns down the hill, but he finally managed to cut a good sized sled path through the snow.  From the window I watched the friends sled, then stop and chat for a few minutes before returning to the hill.  It didn't take me long to realize that they were scheming.

Within the hour the pair came barreling inside, tracking snow through the house and requesting flowering cans. When they finally calmed down enough to talk coherently, they complained that snow wasn't fast enough. With water dripping all over the floor from my melting snow buddies, they finally got around to proposing their plan to  make the run faster.

I finally acquiesced and allowed them to cart watering cans of water outside to sprinkle on the sled path. As predicted, it was bone chilling cold outside so the water froze quickly.  Within minutes the little snow scientists were whizzing down their ice hill on the jet ski sled.  It looked so much fun that I decided to leave Hamlet in Scott's capable hands and I bundled up to head outside.

It turns out that the kiddos had a different plan. I was relegated to pack mule, hauling the sled back up the hill after each ride. (I put my foot down when they tried climbing onto the sled to be pulled up the hill.) It's a good thing that my leg has healed and my socket fits perfectly, because I certainly got a work out yesterday!
at 5:53 AM No comments:

The weather forecast was finally correct in predicting a significant snow fall.  After so many false alarms this winter, Robby is delighted with the prospect of a foot of snow to play in and to go sledding. The flakes started falling late afternoon yesterday, prompting the school systems to be proactive by cancelling school before we sat down for dinner.

Nights morph from mundane to fun when you know that school is cancelled the next day. Robby (and Scott) were both thrilled with a prematurely called snow day and began dancing when I revealed the news. The pair immediately began to plan the snow day activities which included pancakes and bacon for breakfast followed by sledding and a snowball battle. Nana surprised Robby with Nerf Snowball Blasters which he has been looking forward to using. It looks like today is the day!

I'm sure that Timmy will be pulled in his sled for short periods of time, but he will spend the bulk of the day inside with his Daddy. With his getting over being sick and still on antibiotics, it seems prudent to keep him out of the severe cold. If he is anything like his brother,  have no doubt that in a few years he'll be in the snow until I force him to come inside.

This morning I dug my hand warmers out of the closet.  I discovered years ago that one or two thrown into my socket will keep my leg warm and toasty while playing in the snow. I found my boot (another amputee perk is that I only need one) and I have located all of the gloves. As soon as breakfast is over we're going to enter into the winter wonderland for snowy fun.  Robby and I have been waiting for this snowfall for a long time!

When Timmy woke up Friday morning, I knew that my day had suddenly become more complicated. I had been looking forward to playing Room Mom in Robby's class, bringing the Valentine's Day treats and overseeing the celebration. In addition to this commitment, I realized I was also going to have to squeeze in a trip to the pediatrician and pharmacy. Timmy's eyes were swollen shut, and he had a fever.  My happy little crawler woke up as a snot smeared, crusty eye mess.

After packing up the car with the party supplies and dropping Robby at school, Timmy and I headed to the pediatrician.  She diagnosed conjunctivitis, an ear infection and mild pneumonia. I knew that he was sick, but I didn't realize that he had so much going on.

Although we had only been out of the house for 90 minutes, Timmy had dissolved into an absolute mess.  I tried to keep his nose wiped but found the task nearly impossible. Sitting in his car seat, he instinctively smeared the thick green buggers all over his face and hair. I tried to clean him off as much as possible, but he was so sick and he just didn't want to be bothered. Between the dried buggers and his crusty and swollen eyes, he certainly did not look picture perfect! At the moment my priority was getting him medicine, not making him presentable, so I proceeded straight to the pharmacy to pick up his medicine.

Even though I was well aware that Timmy looked disheveled, I was shocked when I was approached by a stranger in the prescription drop-off line. After a tap on my shoulder, I turned around to see the smirking face. "I don't mean to interfere but maybe if you washed your child every once in a while he wouldn't need medicine. Look at him. He is filthy. I assume you have had trouble taking care of yourself (stares and motions rudely at my leg), but please try to do better by your child ".

Initially I was shocked that somebody would be so brazen as to approach a Mom taking care of an obviously sick child. My shock morphed to anger as she continued to talk and smirk. I turned my back but she just didn't stop talking and berating Timmy's appearance. Without thinking, I instinctively leaned towards her and barked, "Lady, if you don't stop talking I'm going to rip your (expletive) face off."

Now face to face with the scrawny accuser, I felt emboldened and somehow knew that I was not going to stand down. She must have seen the ire in my eyes, because she forfeited her space in line behind me and walked away. I'm glad she heeded my warning because I honestly have no idea what I would have done if she continued to cast judgment!

The rest of the day was a blur of Valentine's festivities and caring for a sick Hamlet. I tried to push this encounter out of my mind,  but it haunted me throughout the weekend. Every time I thought about the exchange I felt myself getting riled up again. I know that this lady, and I use that term only to describe her gender and not her demeanor, does not deserve my mental energy. Of course knowing something sometimes has little impact on feelings. I'm still angry when I think about it, and I suspect that I will remain this way for a long time. How dare she question my parenting abilities!