Happy Valentine's Day. I realize that I'm early, but since today is Robby's Valentine's Day party at school I am celebrating today. I am not particularly fond of this holiday, but I do love my role as class Mom and since a party is involved, I am all about Valentine's Day!

Scott took off work yesterday to help with Timmy so that I could unwind after the trip to Texas. It was really nice having him home, and the extra set of hands trying to wrangle our fast crawling Hamlet was certainly appreciated. During nap time Scott headed to the grocery store, armed with a list of needed supplies for the class party.

About fifteen minutes after he left, which is also the driving distance from our house to the grocery store, the phone began to ring. He sounded frustrated as he explained that he couldn't find the candy hearts I had requested. I told him to go to the holiday aisle, a direction which only served to increase his frustration.

"Peg, I am standing right in front of the Easter candy. I see bunnies and chocolate eggs. I've looked all through this stuff and I don't see any candy hearts."

Sitting at home in my rocker, I couldn't help but smile. "Scott, continue walking down the aisle to the Valentine's Day display." With that he quickly hung up the phone.

A few seconds later it rang again.  "I found the candy hearts.  They weren't with the Easter candy.  They were with the Valentine's Day candy."  Not wanting to stymie his desire to help, I chose to not tease him for shopping the wrong holiday. Instead I reminded him that we also needed rice cereal for Timmy and hung up the phone.

Robby and I spent the afternoon assembling his Valentine's for his classmates. We decided to go outside the box this year, crafting robots out of food items. (I'm glad that he found the hearts, because putting an Easter Egg on the robot's chest would not have been conducive with our theme.) I think he did a great job with his robots, and for the first time ever no tears were shed when addressing his Valentine's for his classmates.

Today is the party, and I know that everybody is going to have a great time. We'll have cupcakes, crafts, and a few games. (I'm sure Robby's robots are going to be a huge hit!) I still don't like Valentine's Day, but I do adore spending time with Robby planning his class party. I love that he wants me to be class mom. 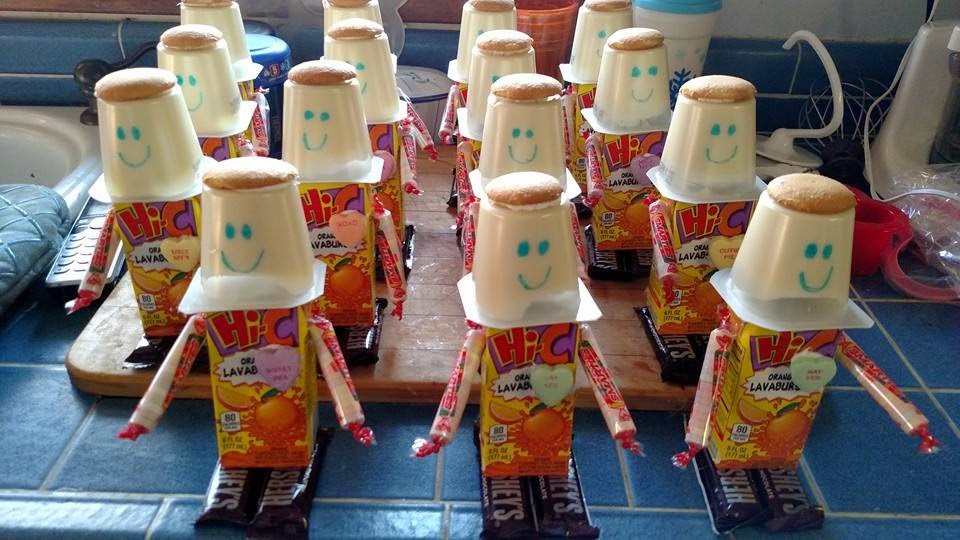 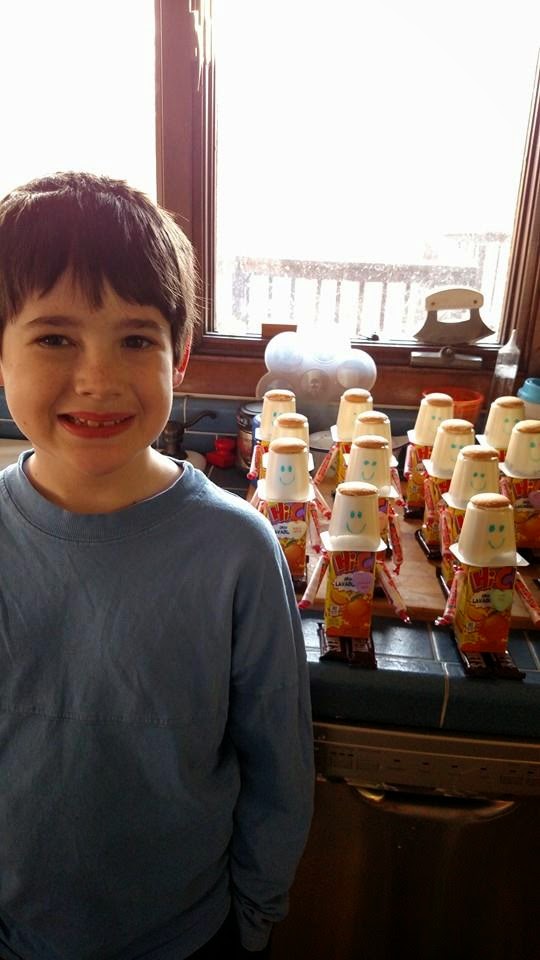 I always take the pre-boarding courtesy afforded by Southwest for individuals with disabilities. While I don’t consider myself to be disabled, I have come to accept that the extra time to get situated is not only beneficial for me but also for my fellow passengers. As an added bonus, I am allowed to pick the seat of my choice, which is a benefit I don’t take lightly!

I boarded early and took a seat by the window in the third row of the plane. I deliberately chose to sit towards the front of the plane becauseI had plans of disembarking as quickly as possible. After a wonderfully exhausting and emotional visit with my Dad, all I wanted to do was hug my kids and kiss my husband.

After I was situated, I settled in and watched my fellow passengers begin to filter through the aisles. An elderly gentleman was struggling to put his luggage in the overhead compartment. Just as I was preparing to stand up to help, I witnessed an exchange which left me disgusted. In fact, the interaction haunted me the entire flight.

A younger (probably early 20’s) man who was also considerably stronger, took the opportunity to berate the elderly passenger. Instead of offering to help, which would have only taken a moment of his time and would have certainly expedited clearing the aisles, he proceeded to ridicule and chastise the senior citizen.
“Hurry up and get in your seat. You’re blocking the aisle,” the rude whipper-snapper loudly barked.

The man, now looking increasingly frail and obviously embarrassed, softly said, “I’m trying to get my bag in the overhead compartment. I pre-boarded because I knew it would take me more time. Please be patient with me, I hurt my shoulder and my wife isn’t feeling well today.”

Without missing a beat the younger man, and I use that only to describe his gender because he certainly didn’t possess the manners and civility I expect to accompany that descriptor, continued with his chastising.  “Maybe you shouldn’t be flying old timer. Hurry up and sit down.”

I saw the look of despair flush over the face of what had previously been a proud man. I quickly grabbed the bag and placed it in the overhead compartment. As soon as they were settled in their seats the rude young man pushed his way through the aisle and disappeared into the back of the plane

I spent the remainder of the flight kicking myself for not speaking up to defend the couple. While I did help, I regret not doing more. I hate that I continue to become intimidated by verbal confrontation!
at 6:47 AM No comments:

Yesterday was one of bittersweet exhaustion. I spent the day with my Dad, helping him sort through his work memorabilia in an effort to compile scrapbooks for each grandchild. My Dad has dedicated his life to his career and has helped millions through his efforts. In the midst of dealing with his diagnosis, he is feeling driven to leave a legacy so that the grandkids know that he was more than a man who provided adventures and lollipops.

Watching him sort through his boxes was difficult, but I knew that it was also cathartic for him. There is a peace that comes from reflection, and yesterday I watched that peace envelop my Dad. He reminisced with pride about his various accomplishments while we sorted through the treasures to select items for the scrapbooks.

After the piles were compiled, I headed to Kinkos to make copies. Two hours later I left the copy center with arms full of my father's accomplishments. It felt strange copying, categorizing and sorting all of his milestones.

After the paper portion of the scrapbooks was complete, we moved onto a special project. We created a video for each grandchild, documenting his love for them as well as discussing the special memories they have shared.  He spoke from the heart to each grandchild, telling them of his hopes and dreams for each one. The videos were heartfelt and personal. I was honored to be trusted to record these messages, but hearing him speak to his grandchildren, knowing that he won't physically be there, broke my heart. They are incredibly lucky that he loves them so deeply to take this time to create a legacy for each one. I have no doubt that the scrapbooks, and especially the videos, will be treasured when they are presented at each child's high school graduation.

Today I head back home. I'm leaving torn because I want to stay with my Dad and spend as much time with him as possible. On the other hand I know that my sister is coming down and she deserves the same quiet moments that I have enjoyed. It will be hard driving away this morning, but I am leaving with the promise that I will be back soon. I have to believe that I'll be able to see him, talk to him and hug him again or I don't think I'd be able to get on that plane.  So, I will keep on believing and hoping.

With one slight adjustment of movement, everything has changed. Timmy has been on the verge of crawling for weeks. Up on all fours, he has been rocking furiously trying to move. Up until recently, he only managed to flop on his tummy. Undeterred, little Hamlet has kept trying.

While on the phone with my Mom this past Friday I knew that he was getting close. He was eyeballing an electric cord with a determination I haven't seen previously. (I find it humorous that he has a room full of brightly colored, musical playing toys and all he really wants to play with is the cord to the electric blanket.) Sensing that the end of my still little baby days was near, I quickly hung up the phone and grabbed my video recorder.

Little Timmy is now crawling!  Being a proud Momom, I am excited to share his milestone in this blog!

Where I Should Be

While I miss my boys, right now I am exactly where I need to be. I am writing this blog sitting next to my Dad, who is in good spirits and happy for my visit. I am so thankful that i am able to come down to spend this time with him.

Although the purpose for the visit is definitely high stress, my travel experience was unusually easy. I sailed through security without a hitch and was at my gate before Scott even got on the highway to return home. I took full advantage of my "disability" by accepting the pre-boarding opportunity. Not having to stand in the cattle call and scramble for a seat was a perk I was happy to accept. After I arrived in Austin, I hopped into the rental car and drove to my Dad's house. To my delight, the entire trip was seamless!

Although Robby says he misses me, I know that he probably doesn't, at least not yet. He and his Daddy have the week mapped out, with trips to Sheetz for man food on tap for more than one dinner. The two are probably happily playing video games and searching the internet for game cheats. Timmy is with my Mom, fully reveling in the attention of his Nana, Aunt and cousins. I have no doubt that he is both well-loved and highly stimulated. Who knows, maybe this will jump start a proper sleep pattern for little Hamlet.

Today will be spent sitting, talking, reminiscing or anything else my Dad wants to do. I am at his disposal, and I'm just happy for this time with him.