I have not been so happy for a weekend in a long time. Although I had a great time visiting my Mom, I can't help but think that the time away contributed to the chaos I felt this week. Typically I spend Sunday cooking, cleaning, working and prepping for the week ahead. I didn't do that last weekend, and this week I felt like I was constantly in motion and being pulled like Gumby. I'm hoping that this weekend I will be able to reset, to reorganize and to reset for a fantastic week.

Tomorrow we are heading to the Christmas tree farm to tag our tree. We have never tagged a tree before, but the boys and I are looking forward to it. Saturday the weather is going to be gorgeous, and it will be nice just being outside and having fun. It feels like it has been a long time since we have had a family adventure!

With all of our traditional autumnal adventures sidelined because of Covid, it is fun to try something completely new. According to the tree farm web site, we are supposed to decorate our tree in the field to lay claim on it. Tonight Timmy, Robby and I are going to make birdseed ornaments and perhaps even string popcorn. Who knows, maybe we'll even watch Grinch and/ or Polar Express as we create.

The weather is supposed to be crummy on Sunday. The remnants of another hurricane are coming through our area, bringing more rain. While I'm not looking forward to the rain, at least I won't have a weather temptation away from planning and prepping.

I feel vindicated. Unlike Tuesday's virtual schooling disaster, I feel like yesterday was a fantastic day. Timmy and I not only completed our assignments without a battle, but we thoroughly enjoyed the activities. We were laughing and learning, a refreshing change after the tears that followed Tuesday's assignments.

While Timmy and I were working at the kitchen table, Robby was diligently completing his assignments in his bedroom. Everything was smooth, and I'm so proud of both of them. If we can keep this flow, I will be a happy Momom!

I'm feeling better today. Partly because of the schoolwork success, but primarily because I had a great night sleep. Stress and anxiety have kept me from sleeping for the past few days. It felt great to finally stay asleep for more than 45 minutes at a time.

Yesterday was not my best day as a virtual school Mom. Already feeling stressed and on edge, I recognized myself unraveling as the day continued. I am hoping for a better day today because, in all honesty, yesterday I failed.

Unfortunately my schedule is busy again today. Between work, Circle Time and chauffeuring to and from guitar lessons, I won't have a true break until I go to bed. As I am running myself ragged trying to keep on top of two students, my own work and the household, I find myself feeling increasingly resentful towards Scott's nightly bike ride.

Logically, I know that he is simply trying to become healthy and I have been supporting him on this venture. We (I) have completely changed our diet to avoid salt and to increase potassium. Our snacks have changed, and I am cooking more from scratch to avoid the salt traps of take-out. But when I see him hop onto his bike and take off up the driveway while I'm still at the table working or in the kitchen cooking or cleaning, I become jealous and resentful. What I would give for the luxury of just a few minutes by myself to ride around the neighborhood!

I continue to hope that, as the school year progresses, we will find our groove and more time will open up. I know I need to take better care of myself. Unfortunately, right now self-care has become a luxury that is out of reach because of time.

Although we had originally planned to return home on Sunday, we decided to go ahead and stay at my Mom's house for another night. Timmy was excited about experiencing Circle Time with Tiffany. While she wasn't nearly as entertained by the activities, Timmy was delighted to have his Tiffy next to him during class.

After Circle Time Robby logged onto the computer to meet with his math tutor. While he was working on his math, Timmy and I packed up the car to head back to Virginia. As soon as tutoring was over the boys and I piled into the SUV and headed back home. I wish we could have stayed longer, but school activities and assignments necessitated our return.

I'm always sad when I leave my Mom's house. Leaving during the pandemic has been especially bittersweet. I know that, while it is safe to travel now, that our opportunities could change in a moment's notice. If Covid numbers start rising around or or around me, I will again be tightly tethered in place.

Instead of worrying and feeling sad, this morning I'm trying to focus on the positive. At least we were able to visit last weekend. I don't know what the numbers are going to do in the future, but we had a fantastic time together. Focusing on the fun instead of the worrying has gone a long way in calming my pandemic anxiety. 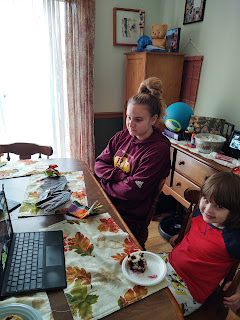 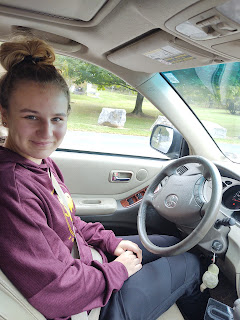 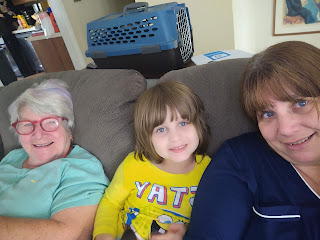 No Doughnut for Us

We had a great weekend visiting with my Mom. Robby and Timmy were particularly excited to hang out with Tiffany. Although we didn't do anything grand, the kids had fun playing around the house and riding their bikes and scooters up and down the road. Sometimes, time with family is all that is needed to heal and regroup.

Although we avoided going out on adventures, a trip to the doughnut shop on Saturday night turned into an memory. It was around 8 pm when the kids asked if we could pick up doughnuts in anticipation of game night. Never one to say no to a doughnut, I grabbed my keys and we headed towards the 24 hour doughnut shop.

As we expected, the lobby was empty when we arrived. (A sight which I found pleasing because I like to avoid crowds during a pandemic.) Masked and ready to order, we were all taken aback when the clerk was not wearing face protection. It took me a few minutes to formulate my thoughts, but before I paid I inquired about her lack of a face covering.

She smugly smiled and said, "My boss says masks are optional and a choice. He says they aren't necessary for employees so we don't have to wear them." She began to put the tape on our box when I made my decision.

I remained even toned, but I said, "We've changed our minds. I don't feel safe being served doughnuts by somebody who is unmasked during an active pandemic.  Shame on your boss for promoting infection terrorism."

I turned around, and we walked out. My niece, who turned back as we were leaving, said she saw the clerk throw the doughnuts down before rolling her eyes and storming to the back room. It was so socially irresponsible for a doughnut business to ignore mask regulations. Shame on them! I won't be back to Maple Doughnuts in Etters. If they actively disregard mask protocols, I can't help but wander what other regulations they ignore.