I switched onto autopilot as soon as I heard the first heave. Even with a bone bruise, I hopped out of bed, threw on my leg and made it to Timmy's room in record time.  My little Timmy woke up vomiting and feverish. After cleaning his carpets, blankets and him, I blew up the air mattress and settled in for a long night.

I hate when the kids are sick. I especially hate the stomach flu. I don't remember my mom wretching as she cleaned up my vomit as a kid. I remember her being calm and loving. She assures me that she did, indeed, gag during the task. I'm hoping that Timmy doesn't remember his Mom nearly matching his vomit in an attempt to clean. I have a rather weak stomach when it comes to vomit.

Today will be spent nursing my little guy. Between his tummy and my leg, we won't leave the couch except to go to bed. Hopefully, we have contained patient zero adequately and the rest of the family won't be impacted.
at 7:46 AM No comments:

For the first time in four years, I am relying on a crutch to get around. While I dislike using a crutch, I know that I wouldn't be able to walk at all if I refused to use it. I developed a bone bruise on the bottom of my tibia, making walking extremely painful. With the crutch I am able to offload the weight from my prosthesis, minimizing the discomfort and hopefully allowing it to heal quickly.

My leg has been increasingly tender and uncomfortable with the issue being especially pronounced in the mornings. For the past week, I have been holding onto furniture, walls and any stable object within my reach until I became adjusted to the prosthesis. In reality, I think my "adjusting" was simply my leg numbing up.

Yesterday afternoon I sat down and slipped my leg off to relax for a few minutes. When I tried to put it back on, the intense pain had returned. Only this time, I was not able to wait it out. I tried for nearly an hour to walk through the pain only to have it intensify and become more debilitating. I had no choice but to go to the back of our closet, pull the clothes off the top of the crutch and start using it.

Timmy has never seen me use a crutch and he found the sight both intriguing and upsetting. When I explained that Momom had pain walking and that the crutch was going to help, he went into "Doctor Timmy" mode. Using his veterinary kit, I received a thorough check-up. I was diagnosed with a leg ouchie and told to sit on the couch. While I was sitting on the couch, Doctor Timmy brought me tweezers, a bandaid, a Poise pad, a can of soda, a bottle of Benadryl, a peach lollipop and his puppy blanket. Basically, he brought me everything I have ever used to help him feel better when he was sick.

My leg is feeling a tad better today, but I will continue to use the crutch. Hopefully, a few days of taking it easy will get me back on my feet. Until then, I'm planning on taking Timmy to an indoor playground so I can sit while he can safely expend some of his energy.
at 7:12 AM No comments:

During the past few weeks in English class, Robby has been learning about the nuances of writing various types of letters. So far he has written a friendly letter, a get well letter, a letter of complaint and a cover letter. Yesterday he (finally) completed the unit by writing a formal business letter.

With all assignments, he has been given the option of writing the letter to a real or to a fictional person or company. Because my little Koopa does not like dealing in abstracts, every time he has chosen to write to a real person. He has been disappointed that his outreach has fallen on deaf ears because none of the recipients have responded. (Perhaps he is learning more than just how to construct a letter in this unit.)

Undeterred, yesterday he poured his heart into writing a letter to our Senators. After introducing himself he eloquently made the case for keeping the Endangered Species Act strong. I was so proud of his final product and wanted to share it.

To the delight of my little Koopa, his no-response streak was broken by Senator Tim Kaine. Robby was ecstatic when he checked his email last night and found a response. Now he is creating a list of more letters to write; it seems that I might have a little activist on my hands!

My name is Robert Chenoweth and I am in seventh grade. This past summer I volunteered at the Sea Turtle Oversight Protection (S.T.O.P.) in Fort Lauderdale, Florida. Every night we went out onto the beach from 8 pm to 4 am to monitor the sea turtle nests. When the hatchlings became disoriented because of the light pollution. I was trained to redirect them to the ocean. Sea turtles are special creatures that need to be protected.

While I was volunteering, I witnessed two sea turtle mother’s crawling up the beach to lay their eggs. One of the turtles was missing part of her flipper but still managed to crawl. The eggs were protected because of the Endangered Species Act.

January 22, 2019
Mr. Robert Chenoweth
(omitted our address)
Dear Mr. Chenoweth:
Thank you for contacting me about protecting endangered species.  I appreciate hearing from you.
As an avid outdoorsman, I support policies that will help endangered fish and wildlife species thrive. The Endangered Species Act has worked to save some of our most cherished wildlife. The bald eagle, our national symbol, was once critically endangered but has made a triumphant comeback across the country and can be seen in many parts of Virginia today where it would not have been seen before.
I would have significant concerns with legislative proposals to water down the Endangered Species Act. I believe decisions about the Endangered Species List are best made through scientific analysis by wildlife professionals, not by politicians. I appreciate that Endangered Species listings can on occasion be a complicating factor in land-use decisions, and I believe conflicts like this can be minimized by investing more in upfront prevention initiatives, such as the State and Tribal Wildlife Grant Program. This initiative supports state wildlife agencies, such as the Virginia Department of Game and Inland Fisheries, in taking steps to sustainably manage threatened wildlife before species fall to the critically low levels that necessitate Endangered Species Act protection.
As Governor of Virginia, I worked with Republicans and Democrats in the General Assembly, environmental organizations, and government agencies to preserve more than 400,000 acres of open space in the Commonwealth, which benefited wildlife and people alike. We must be vigilant in protecting these resources for future generations to enjoy.
I will continue working to protect the endangered species of Virginia and the entire nation.  Thank you again for contacting me.
Sincerely,

By late afternoon we shattered our vow to stay inside and hibernate. Hamlet was full of energy and was bordering on both destructive and exhausting. After playing what felt like my 100th game of Pimple Pete, a disgusting game he coveted and loves, I began to search for activities. We decided to pack up and visit the open bounce at a local bounce house arena.

Robby decided to come along, which delighted his little brother. Timmy was grinning ear-to-ear with the prospect of playing and jumping with his big brother. Once we got checked in and I paid, the boys took off running to the arena.

The brothers bounced, slid, climbed and giggled for two hours. By the time the bounce time was over they were both sweaty, red-faced and exhausted. My heart was full as I was watching them actually play and get along. Because of the age spread, there are so few activities and interests that they share. Watching them play together is rare and special! 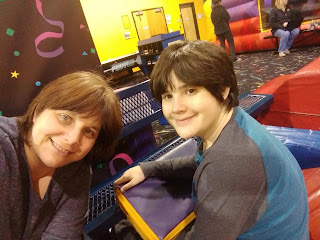 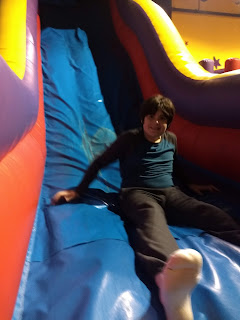 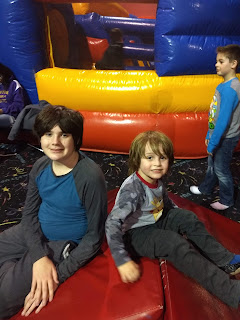 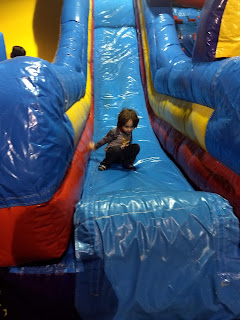 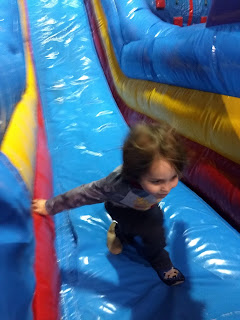 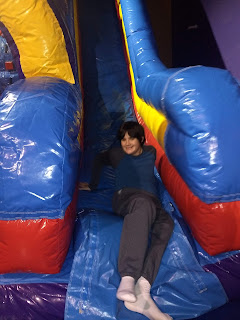 Yesterday I struggled to walk due to the pain in the remainder of my calf muscle. As soon as I slipped on my prosthesis I knew that I was going to have a problem. It took several minutes before I was able to weight my leg, and the steps remained sore, bordering on painful, throughout the day. I am not sure why my leg hurt, but I can only surmise that the change in weather patterns was the culprit.

Today is supposed to be wicked cold so I suspect our holiday will be spent curled up in front of the wood stove, desperately trying to keep warm. Robby has to go to his math tutor. With the exception of chauffeuring him to and fro, I have no intention of leaving the house.

When the temperatures dip into single digits, we refer to the phenomenon as "Martian Air."  Robby dubbed the term many years ago when his studying the atmosphere of Mars happened to correspond with a severe cold snap. He was fascinated by the fact that it was colder in Virginia than it was on Mars. The cold weather nickname stuck, and we spent the weekend bringing in wood to prepare for the invasion of the Martian Air.

Hopefully, the wood stove will be able to adequately battle the falling thermometer!