Yesterday I found myself overwhelmed with pride and admiration for my little Koopa. He was able to conquer his fears and anxieties by following through on his pledge to take the Penguin Plunge. He is growing into such a wonderful young man!

The temperature was hovering around freezing when we arrived for the Plunge. Unfortunately the strong winds did not help with our quest for warmth. Bundled in our heavy coats and winter attire, I was dreading Robby stripping down almost as much as him.

Despite complaining about the cold, in the end he ran into the water like a true champion. He went further and deeper than most of the adults. It was only when he was walking on shore that he realized that he had lost his shoes in the water, forcing him to take the plunge again to retrieve them.

I am grateful that my cousin Dan came out to cheer on Team Koopa Kids. After Robby came out of the water the second time Dan scooped him up, threw him over his shoulder and ran to the warm changing tent. A few minutes later my little Plunger emerged chilly but dry, sporting a grin from ear to ear.

After the Plunge everybody went to my Mom's house, where she had homemade soups and lasagna ready to warm us all up. It may not have been the traditional New Year's meal, but the afternoon was spent with family and friends. I have a feeling that the Penguin Plunge may become our new yearly tradition.
at 8:34 AM No comments:

Yesterday's New Year's Eve celebration ended up being a low key affair. I had planned on taking Robby, my niece and my two nephews to a neighborhood party to ring in the New Year. (I was particularly tickled with the fact that the countdown for this kid centric celebration was scheduled for 10 PM vs. midnight.) On my way to my Mom's I stopped and picked up fireworks, expecting that I would be instantly propelled into the "World's Best Aunt" strata.

Within ten minutes of arriving at my Mom's she received devastating news. One of her good friends was in a car accident on Tuesday. Both she and her husband were pronounced dead, while her daughter and grandson are in the hospital being treated for serious injuries.

The festive mood instantly turned somber as my Mom tried to absorb the news. I knew that she was hurting, yet I found myself at a loss as to how to help her. I resorted to the only thing I knew to do- I went to the bakery and bought a pie and a cake.

After setting off the fireworks after dinner, we all changed into our pajamas and quietly watched TV. Robby, Timmy and I were tucked in before 9. To quote my little Koopa, "we rung in the New Year from Sleepyland."

Today Robby is participating in the Penguin Plunge. Although jumping into the freezing cold river isn't my idea of fun, I'm happy and excited to support him. He has raised almost $700 for the Humane Society, and I am extremely proud of his efforts.  Rest assured, I'll post a video this afternoon. 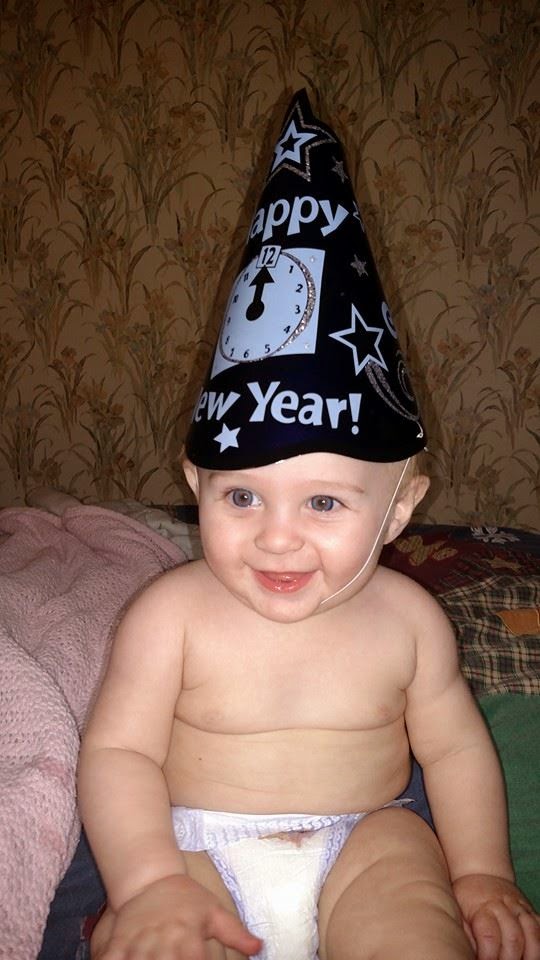 This is the final day of 2014 and I must admit that I'm delighted to kiss this year goodbye. The year has held an inordinate amount of physical pain and emotional frustration, and I am happy to put it in the past. This calendar year did hold one outstanding highlight in Timmy's birth. I adore seeing his gummy smile each morning and watching him grow and learn. Timmy being healthy trumps all of the pain and anguish we encountered.

While 2014 was a struggle, I am proud that we survived and emerged stronger and wiser.  I realized that true strength comes from admitting that I couldn't do it all alone and that I needed other people to pitch in and help.  Asking for assistance does not come easy for me, but I am getting better at reaching out when I am in need.  I am so grateful that I have a small army of family and friends willing to lend a hand. I know that everybody is not nearly as lucky, and I am thankful for the support in our lives.

Our little family has settled into a comfortable routine which keeps me both fulfilled and busy. I am fortunate to be able to do the lions share of my work at home, allowing us to keep Timmy out of daycare. When I do have to attend meetings or finish reports, I know that he is both safe and happy in the baby care room at Robby's school. I am juggling several jobs while trying to remain a stay-at-home Mom, but I know that the sleepless nights and stressful moments will pay off as Timmy and Robby grow. The memories that we are creating and the bond that is being forged will be worth every single not-so-easy-to-cover grey hair.

Typically my New Year resolutions are fitness/ weight related. This year, instead of a smaller jean size, I am desperate to establish order and organization. My life is  busy and I am juggling so many tasks daily that I am finding that I need to try to simplify as much as possible.  From not being able to find my keys in the morning to frantically scouring the freezer for something to throw into the oven for dinner, these little life aggravations are wearing me out.

I know myself well enough to realize that trying to enact a sweeping lifestyle change is only setting me up for failure. Instead, today I am resolving to make two small changes. I am going to always put my car keys in the basket at the top of the stairs. I am also going to create a weekly menu so that I don't have to scramble to come up with something to serve for dinner. Hopefully I'll be successful with these baby steps, and I'll be able to add more changes next month.  Who knows, by this time next year I might be the most organized person on the block!

Driving to the airport on Sunday I tried to prepare myself for the chaos that was sure to ensue. I knew that we were entering the travel fray on one of the busiest days of the year, but like everybody else, I wanted to get home so that we could enjoy a few days before New Years. We were fully prepared to assume our positions as human sardines in the overcrowded terminal and plane. Although I wasn't looking forward to the next few hours, I was excited about going home.

Traveling without special needs would have been frustrating at best. Trying to navigate the airport (and especially security) with both a prosthesis and an infant on such a heavily traveled day was akin to Mission Impossible. After turning in the rental car, I took a deep breath and tried to prepare myself for the airport obstacles in my future.

It took us nearly ten minutes in line to unload our carry-on luggage onto the screening belt. Once all of the laptops, handheld electronic devices and baby formula had been removed and separated, I helped Scott fold the stroller and stuff it onto the belt. He took Timmy and Robby and walked through the screening area without a hitch. I knew that my prosthesis would trigger the alarm and prepared myself for the obligatory pat-down procedure.

After being separated from the line for additional screening, I was offered a seat and asked to remove my prosthesis. Oh boy, here we go again! When I politely refused, explaining that it was against their procedure to make such a request, a supervisor was called to speak with me. Again I was asked to remove my leg for screening. I reiterated my refusal, and she finally acquiesced after declaring that a "thorough" pat down would be necessary.

I declined the offer for a private screening and allowed the agent to feel my body in public. (I feel that it is important for my fellow travelers to see the procedures in action.) After copping more feels than I typically allowed on a third date, the agent declared me free to fly. As I was walking to meet my boys, the agent called me back so that she could screen the diaper bag.

Despite having already cleared the x-ray screening, the agent was insistent that the bag be hand 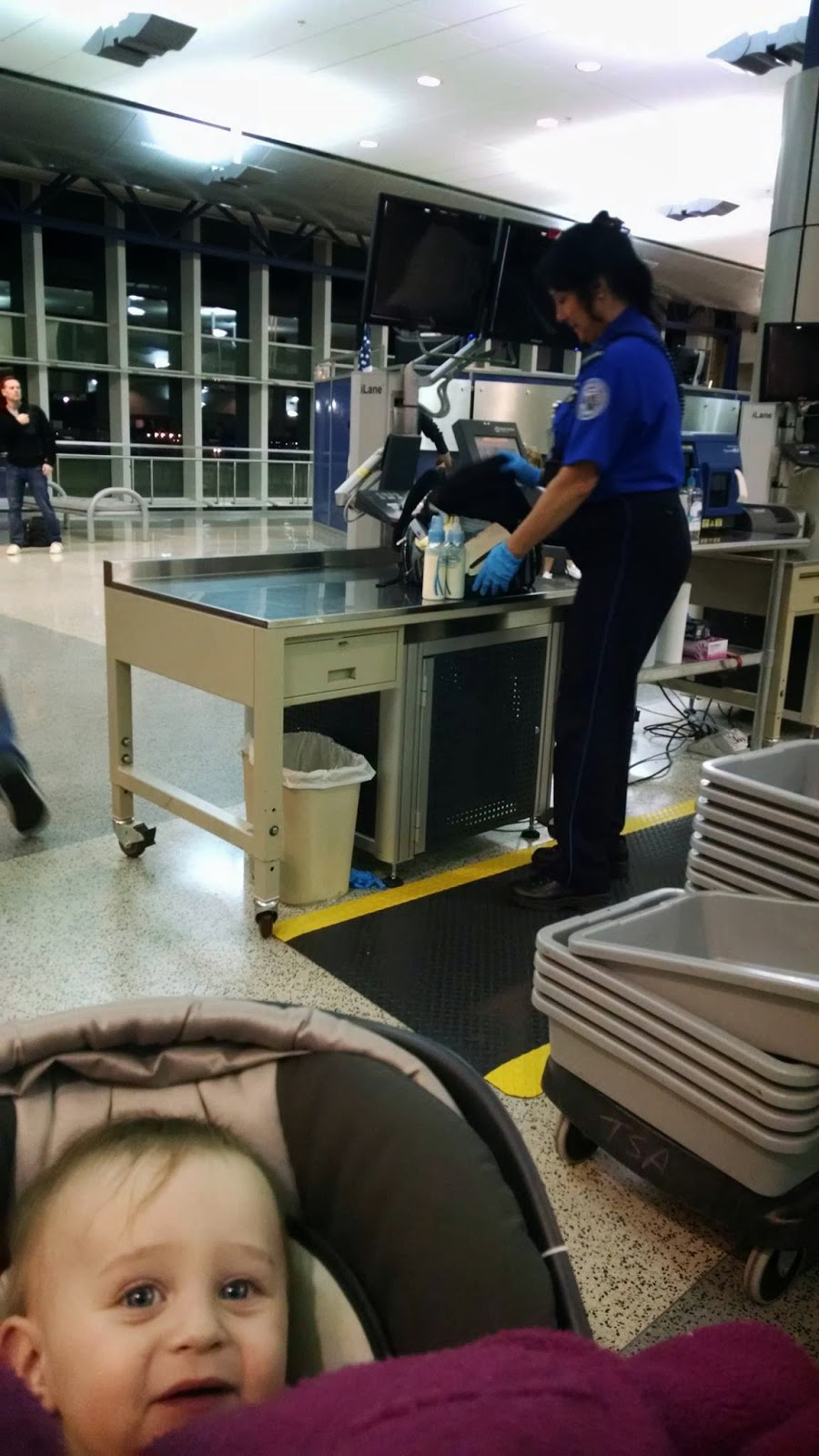 searched. Everything was taken out and strewn on the table. They held both of Timmy's full bottles of formula and indicated that liquids were not permitted through security.  (Thankfully Scott was able to capture Timmy's "Hey, that lady took my bottle" look.)

Again, I found myself in the position of educating the agents on their own procedures. Baby formula, breast milk and other dietary liquids are permitted through TSA security if they are declared. After another pow-wow, it was decided that the baby formula could fly as well.  It is a good thing I know the rules and regulations because, if I didn't, I would have had a hungry and cranky baby on my hands!

I don't mind being screened at the airport. I also understand that my prosthesis may require additional or different procedures. I resent having to educate the agents on their own procedures and protocols.
at 7:44 AM 2 comments:

This holiday season I was reminded about how much I despise traveling this time of year. Nothing can move me from jolly to bah humbug like having to pack up a suitcase and get on a plane. Even if I am only gone for two days, by the time I return home I find myself devoid of all Christmas spirit.

We are finally home from visiting Scott's mother for a few days. I am now completely done with all things holiday related. I no longer want to look at the twinkle lights on the tree or the Christmas cookies on my counter. In all honesty, I found myself becoming frustrated when I saw homes adorned with holiday lights last night. I had to pause to remind myself that Christmas was only a few short days ago, even though right now it feels like a lifetime. I plan on spending the day purging my house of the holiday clutter while putting this season behind us.

Please don't get me wrong--we had a wonderful Christmas holiday. Between our trips to Williamsburg and Pennsylvania, we have fully embraced the magic of the season.  I am completely out of magic and don't particularly want to invest the energy in mustering more. I am yearning for the normalcy of our pre-holiday routines. Right now, I just want Santa and all of his glitter laden friends to go back into their box under my stairs.