I have written about my frustrations with my workman's compensation insurance adjustor on numerous occasions. My most recent rants centered around our disagreement concerning my lifetime prosthetic needs. Elsie (my adjustor) proposed a plan which forced me into a wheelchair, albeit it well-cushioned, with minimal prosthetic use. Have I mentioned how much I dislike Elsie?

In order to present a counter proposal, I needed to determine the approximate cost of my future financial care. I thought that the estimates would be readily available on the Internet. I was wrong! I could not find anything that referred to the lifetime cost of prosthetic care for the average below knee amputee. I had to start from scratch.

I felt overwhelmed and intimidated when I was instructed to develop my lifetime care plan. I didn't know where to begin and, had it not been for a wonderful prosthetist and my extremely knowledgeable friend Dave who was gracious with his time and skill set, I might still be hiding under my comforter crying. I am not sure I can bake enough cookies to thank either of them!

After several drafts, we arrived at the following estimate. I wanted to share this information because it is an issue that many amputees will eventually face during the settlement phase of an insurance case. I am hopeful that many of the frustrations I encountered can be avoided through the sharing of my worksheet.

Each amputee's prosthetic needs are different and their lifetime plan must be individualized. I currently utilize three prosthetics: my Proprio (bionic), my Mod III (sport leg) and my swimming prosthesis. The lifespan of each of these prosthetics is based upon the manufacturers warranty. 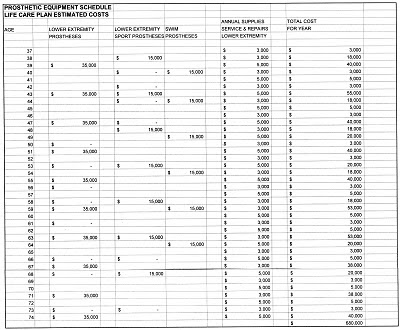 Although I hated being away from Robby and Scott, I had a successful trip to Minnesota. Putting on my professional garb, staying in a hotel and attending meetings remains a novel and exciting experience. I love being challenged academically and exercising parts of my brain that have not been stimulated in a long time!

While I adore being a wife and mom, but I have come to realize that those two roles do not totally define me. I am so much more than a caretaker. It is refreshing to be in the company of others who do not expect me to also clean the dishes or do their laundry after a conversation!

I am excited about this new professional opportunity. During the course I learned the ins and outs of writing insurance appeals. It is a complicated process but I feel like I am up to the task. I am thrilled that my words might be able to help another amputee obtain the prosthetic devices that they require to achieve their goals. As a bonus I get to hold the insurers accountable and force them to deliver on their policy promises!

Although I'm going to be able to work from home, this new endeavor is going to impact my schedule. I suspect we are all going to experience some growing pains as we learn to adjust and adapt to my new responsibilities. I typically don't enjoy change, but I have to admit that this one has me excited!

** Perhaps the best news I received while in Minnesota came in a phone call from Robby. I heard him giggle for the first time in days. My little guy is on the mend!
at 6:55 AM No comments:

Today I find myself in an unusual situation. Robby is still sick, and I'm not with him. Instead, I'm in a hotel room in Minnesota preparing myself for a day of training.

This is the first time that I am away from Robby when he is not feeling well. I've nursed him through every infection, bump, cut, and bruise for the past five years. I feel guilty for not being with him today!

Guilt, I've learned, is part of being a mom. I constantly feel like I should be doing some more or that I should be better than I am. This morning I feel conflicted. Part of me feels selfish for leaving Robby while he is sick. At the same time, I know that this is a fantastic professional opportunity that will benefit the entire family. I am starting to rediscover a life outside of caring for Robby, but the guilt of leaving him while he is sick is overwhelming.

I know that Robby is on the mend and is in great hands because Scott has taken off of work in order to be with him. The two were planning a "Daddy/ Robby sick day" when I was leaving. From what I overheard, they intend to stay in their pajamas all day. (Apparently clothing is a "Momom rule.") They are planning on lying on the sofa bed while watch Scooby Doo and CARS. Robby is looking forward to eating Kraft mac and cheese and as many vanilla pudding cups as he desires for every meal.

I am trying to push the mom guilt out of my mind and concentrate on the task at hand. I'll be in a class all day trying to absorb every detail about insurance reimbursement and the appeal process. It's been a long time since I've had to take notes! Wish me luck!
at 4:24 AM 1 comment:

The past 36 hours have been stressful, exhausting, and just plain miserable. Robby went to bed Sunday night with the sniffles and complaining of a sore throat. At about 10:30 I heard him violently coughing. I slipped on my liner and leg and took off running to his room. I found him sitting on the side of his little race car bad, gasping for air.

After calming the cough in our bathroom converted to steam room, I dug out his froggy shaped humidifier and pulled out the sofa bed. I knew it was going to be a long night. I failed to anticipate just how long the night would become!

I slept wearing my liner for the rest of the night. Actually, slept is not the correct verb. I fretted, worried, and perseverated while wearing my liner. I wanted to be able to reach him quickly if he needed me, and I didn't want to lose those precious seconds that I would have required to don my liner.

Nights like Sunday night are the times that I despise being an amputee. I resent that my response time is impacted because of my reliance upon a prosthetic. I hate that I can't simply get up and run like my bi-legged mom friends. My ability to care for my son is hindered, albeit momentarily, because of my limb loss. Sunday night, listening to him cough and struggle rendered me feeling helpless. Much of mental energy was spent cursing my amputation during those hours.

Despite my lack of sleep, I am glad that I stayed in his room. Robby had two more coughing spells, the final one landing us in front of the doctor. Seeing him struggle to breath and starting to turn blue was utterly terrifying!

It turns out that I have a very sick little cowboy. In addition to a double ear infection and strep throat, he has pneumonia in both of his lungs. Armed with an arsenal of antibiotics and assorted prescriptions, a stock pot full of homemade chicken noodle soup, and a new Scooby Doo DVD, we are hoping for a speedy recovery.
at 5:04 AM No comments: 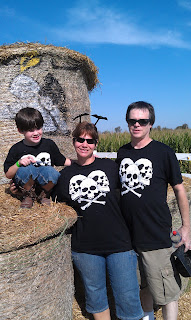 The weather this weekend was nothing short of gorgeous. Seeing the sun shine against the bright blue sky made me feel both energized and happy. Knowing that I didn't want to be holed up all day captive to various football games constantly streaming on the television and computer, I decided to pack up the family (after donning our matching shirts of course) and drive to a corn maze.

Eager to "master the maze," we bypassed the winding line of participants in front of the information booth and entered the field. After all, we weren't interested in learning the history of the field; we just wanted to conquer the maze!

The maze was massive and, it turns out, quite complicated. Every few feet we encountered opportunities to make a directional decision designated by a number on a post. Novices at corn mazes, we quickly became confused and overwhelmed.

We let Robby make all of our directional choices. He had a blast being the leader, marching us up and down (and up and down again) the corn rows. We kept running into dead ends and I swear we walked in the same circle no fewer than four times. It turns out that Robby has inherited his sense of direction from both parents. There was no doubt about it--we were utterly lost in the maze of maize. I was frustrated that we were so pathetically discombobulated when our fellow navigators seemed to be flying through the field.

After about an hour of corn confusion, Robby stopped dead in his tracks. "Momom," he whispered. "Just stay calm, but I think I see the corn monster ahead. Give me your leg so I can whack him on the head. You can hop past him after I knock him out." I refused his offer, explaining that I needed my leg to walk and that Daddy could whack the corn monster. "No no no Momom. Just give me your leg. I'll give it right back, I just want to borrow it for awhile. Please Momom please.. just give me your leg. I promise to give it right back."

We proceeded to have a 10 minute conversation, filled with pleads for my prosthetic and my attempt at logic which must have been bewildering for eavesdroppers through the tall rows of corn. He was finally satisfied to yield a corn stalk to fend off a potential visit from the corn monster although he did tell me that he could not guarantee that we wouldn't get eaten. I decided that it was a risk worth taking. To be honest, I was just happy to be moving again even if it was in a seemingly never-ending and increasingly familiar loop.

We continued our trek through the corn until we came upon a group of people. I noticed that the adults were each holding a sheet of paper. When I asked them where they picked up a map, they showed me that they were holding the question sheet that accompanies the maze. Apparently, had we gone to the information booth before entering, we would have learned that the seemingly randomly placed numbers in fact corresponded with a multiple choice question. Answering the question correctly indicated that direction that should be taken.

Feeling foolish for bypassing the information booth and ignoring all of the numbers, and tired from schlepping through a dirty field for nearly 90 minutes, we dethroned Robby from his role as leader. We followed our fellow navigators through the maze, trying to keep a distance so they didn't realize the depths of our idiocy. After another 10 minutes we were led to an exit which was, ironically, the same place that we had entered. 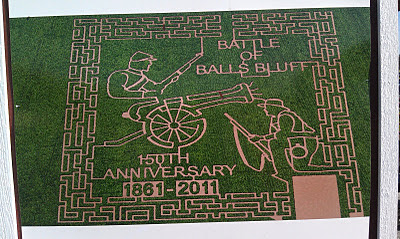 <-- This is a photo of the Maze from above. We are fairly confident that we were looping around the rifle for about an hour...
at 4:35 AM No comments: