Sigh.  I'm afraid that we have a sick little Timmy. Just when I thought we had kicked pneumonia to the curb, last night he started coughing and developed a fever. I hate that he isn't feeling well again, but I am definitely going to be proactive this round.

Timmy finished his antibiotics last Friday. He was doing well and had returned to his lively, mischievous self. After he had been so sick, hearing him giggle and watching him explore and play was especially heartwarming this week. We had a great week playing outside, and I was confident that the pneumonia was a thing of the past.

I guess the antibiotics didn't fully kill the pneumonia invaders. While I thought he was fully recovered, it turns out that the enemy infection was lying in wait and regrouping their battle plan. My little Hamlet melted before my eyes, morphing from a happy little toddler into a sick and sweaty mess.

Today we're going to the doctor, where I expect he will be prescribed a different antibiotic. With all of the concerns about antibiotic overuse, I hate having him relying upon them. However, his exposure to antibiotics has been limited to a small handful of occasions and this is infection definitely warrants the prescription. Hopefully he will rebound quickly, and that he will be feeling better by the end of the weekend. In the meantime, I guess I'll be on the couch watching a lot of Zack and Quack and Paw Patrol during the next few days.
at 5:58 AM No comments:

I absolutely love this weather. There is something rejuvenating about spending the day outside under sunny skies with brisk temperatures. Cool enough to require long pants and a sweatshirt but not cold enough to be uncomfortable, I think that the past few days have been perfect.  After months of stagnant hot temperatures, it is nice to pull out the jeans and sweaters again.

It always takes me a few days to adjust to wearing long pants again. Dressing in shorts is easier than jeans.  Even after a decade of experience, in autumn I always forget to remove my prosthesis and thread the cuff over the socket when getting dressed. Instead I find myself struggling to push and guide a rigid foot through a narrow jean opening. Maybe one of these years I will remember my jean trick the first time.

My dressing method isn't the only thing that changes when I am wearing jeans. After having my leg fully exposed throughout the spring and summer, my "disability" is again disguised. It is odd . blending in with everybody else. In a strange way I feel like I am somehow being dishonest by keeping my prosthesis concealed.  Of course I realize that is nonsensical, but it doesn't negate the feeling that I am somehow sneaking around with a secret.

In a few days I'll be able to get dressed without thinking about it and I won't feel incognito when venturing in public. Blending in will become my new normal, at least until the seasons change again.
at 6:17 AM No comments:

In an effort to get Robby away from computer games and YouTube, last month I signed him up for six weeks of Tae Kwon Do lessons. Scott and I were not sure if he would love or hate the activity, but we were agreed that he needed to try. We worried that, since his friend moved away, he was becoming too much of a homebody and we knew that he needed a gentle nudge to expand his extracurricular horizons.

It turns out that he absolutely adores taking Tae Kwon Do lessons. While I would love to assume the credit, I know it is really just by luck; we could not have chosen a better Dojo. The instructors are kind, funny, caring while still managing to instill gentle discipline and demanding respect. As teachers, Scott and I both realize the difficulty in striking that balance, and we have the utmost respect for their abilities.  Robby smiles from ear-to-ear from the moment class starts until he comes off the mat as a sweaty mess. Even when he is performing is corrective push-ups he is smiling.

In addition to learning a new skill and honing his physical fitness, we have noticed a marked improvement in our tween's behavior. He has been able to check his snarky attitude (most of the time) and has been more helpful around the house. As added incentive to continue his admirable behavior, I discovered that I only need to mention speaking with "Grand Master" when he acts up. Just the threat of my revealing his ill behavior to his instructor is enough to force him to immediately toe the line.  I have to admit that I was hesitant about the success of Robby's foray into Tae Kwon Do, but it ended up being one of the best Decisions we have ever purchased.
at 7:18 AM No comments:

Yesterday was a great day!  Robby had no school, and the sun was shining brightly against a beautiful blue sky. The air was crisp and perfect for outdoor autumnal activities. With Timmy feeling better and my bites healed enough to be comfortably covered by sleeves, we decided it was the ideal day to visit Pumpkinville.

Because Robby and Timmy have a significant age gap, I knew that it would behoove everybody to allow Robby to invite a friend. He enjoys the faster slides and more strenuous activities whereas Timmy is content to toddle around and explore the little houses and hay bales.  Trying to mesh their activity preferences would have spelled disaster.  As much as I hate to admit it, Robby is also at an age where he doesn't necessarily want to spend the entire afternoon with his Mom.  While I still view him as my little boy, I can't deny that he is a tween who relishes independent opportunities.

We picked up Robby's friend Janna and we headed to our outdoor adventure. As soon as we arrived and paid the admission, Robby and Janna headed off to explore. Robby never realized that I was able to keep tabs on his location because of the bright orange coat I handed him to wear. They found me one time during the afternoon when they needed money for snacks. Other than being a walking ATM, the pair had nothing to do with me during our four hours at the farm.

Thankfully Timmy was more than happy to spend the afternoon playing with his Mom. He had a wonderful time swinging, climbing, playing and exploring the pint-sized activities. He smiled from the moment we arrived until I carried him to the car at the end of the afternoon. Clutching his tiny prized pumpkin, he quickly fell asleep during the drive home.

It doesn't happen often, but I have to admit that last night I went to sleep with the satisfaction that I had provided both of my kids with a wonderful day. I'm normally hard on myself, but even I have to admit that I felt like I was a good Mom. Although their experiences were different, both boys had a wonderful time playing outside all day. They went to sleep happy and exhausted. 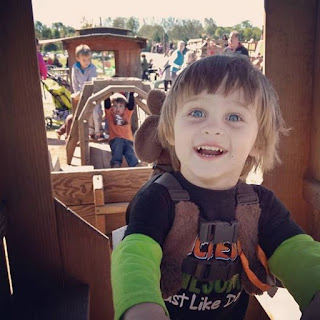 This past weekend was exactly what I needed to recover from the stress roller coaster I have been riding. On a whim, I packed up Timmy and headed to visit with my Mom.  Robby opted to stay home with Scott because he had a birthday party to attend on Saturday.  (Much like his Mom, he will do just about anything if there is the possibility of cake.)  Now that Timmy is feeling better and recovered from his pneumonia, I wanted my Mom to see him happy and playing. I knew that seeing him being silly and happy would do wonders to relieve her worries about him.

Just as anticipated, my little Timmy was in full entertainment mode. He took full advantage of having his Nana's undivided attention. He giggled and smiled so much that I thought his cheeks might start to cramp.  From playing with cars to countless baths (a Nana specialty), he played from the moment he woke up until he collapsed with exhaustion at night. As an added bonus, he slept through both nights!

While Timmy and my Mom played, I was able to relax and just enjoy the downtime. I didn't have to worry about bed bugs, nor did I stress about work. For the first time in a long time, I was able to escape all of my worries. I just enjoyed watching them play and being happy.  I wish I could always keep my life so focused, but I know that those moments of pure tranquility are rare.

We packed up to come home yesterday, where I was greeted with open arms by Scott and Robby. Although Timmy had a great time visiting with his Nana, I know that he was happy to be home. He continued to smile until he went to sleep. I hope that this upward trend continues!
at 6:52 AM No comments: