We woke up this morning to a fresh coat of snow on the ground. It isn't enough to cancel schools, but my goodness it is pretty. The tree covered branches of the trees in the forest surrounding our house is a simply breathtaking view. Before everybody wakes up, my life feels tranquil and calm when the snow is falling.

As I was sipping my coffee and looking at the snow gently falling my little wrecking ball ran and jumped on top of me, bringing me back to reality. Timmy is already begging to go play in the snow and is undeterred by the fact that the sun has not completely risen. His early morning persistence woke up Robby, who was not amused by the unwelcome wake-up. Now I have a grumpy teenager and a frustrated preschooler.

Pulling a trick from my Mom's deck, I set the timer on the oven for when we can go outside. Somehow Timmy seems to accept that we can't go outside until the timer dings, and his outbursts and insistence has stopped. I really wish I had tried her trick earlier!

The tranquil and laid back vibe from my first cup of coffee was immediately shattered when the kids wake up. I love them both to the moon, and I could use a plethora of adjectives to describe their attributes. But calm and tranquil are not among them.
at 7:40 AM No comments:

I don't know what has gotten into him, but yesterday Hamlet was bouncing off the walls. Because he had a runny nose I kept him home, away from other kiddos. I also kept him out of the snow, prompting him to be quite vocal about his opposition to my decision. When properly channeled, he is going to become a gifted protestor someday!

Hovering in the awkward area between feeling well and being ill, nothing seemed to satisfy or entertain him. He was extraordinary high maintenance as if he wanted company in his misery.  When he didn't receive what he wanted, he reverted to an Oscar-worthy tantrum. Scott came home and found Hamlet naked and bright red as he was screaming about wanting to add cat food to his yogurt.

I'm hoping that he is in a better mood today because this old lady is at her wits end!
at 7:33 AM No comments:

Much to the chagrin of the boys, the snow is already beginning to melt. While schools ended up being canceled yesterday, today things are almost back to normal. Scott has a two-hour delay to safeguard against the ice that always accumulates overnight.

I don't mind snow, but I absolutely abhor ice. I disliked ice before my amputation but trying to navigate while wearing a prosthesis makes me feel vulnerable and scared. Each time I see the sheen on our steps and driveway my anxiety begins to rise. In a perfect world, we could have snow without ice!

My Yak-Trax definitely help, when I remember to put them on but aren't always convenient. Planning ahead is not my strength!  I am notorious for wearing the foot guards out the house and forgetting to take them back out when leaving the car. Not having the guard when I need them does not make them terribly useful in my life.

Both boys love the ice that accumulates overnight. They are quick to don their gear and head outside to nature's slip n' slide. Because Robby is 12 and a good big brother (most of the time), I watch this adventure sipping on my coffee from the comfort of my living room.

My little Hamlet is loving the snow. If it were up to him, he would probably spend all day outside in the fluffy white wonderland. Alas, the snow life is not an option for him. Timmy was diagnosed with Cold Urticaria, which basically means that he is allergic to the cold. When he is exposed to extreme cold, his skin becomes painful, hot and develops hives.

Timmy is undeterred and determined to enjoy the snow.  We really didn't want him to miss out, so after a lot of research we invested in the highest quality snow gear we could find in his size. Working together, we can get him ready to play in the snow in about ten minutes.  Scott and I have mastered bundling up our little snow bunny!

Even bundled up, Timmy can only be outside for about 45 minutes before his skin begins to react. If his skin makes contact with the snow the reaction occurs much quicker. We learned this lesson the hard way when he was munching on snowballs.  After a few minutes, he began to complain that his face hurt and that something was wrong. His mouth and cheeks were bright red and hives were beginning to form. I immediately took him inside, we warmed him up and after a few hours he was ready to go outside again.

I feel badly that Timmy has to contend cold urticaria, but we are managing. Things could be much worse, so even though it is an inconvenience and a worry, we are grateful. We have the ability to protect him while playing and we have learned how to read his reactions and symptoms. By the end of the winter, we hope to have it figured it out.
at 6:36 AM No comments:

This weekend was all about snow. We spent Saturday talking about the impending storm, finding all of the snow gear and schlepping in loads of firewood. By Saturday evening the flakes were beginning to fall and the excitement was growing.

In retrospect, Scott and I probably should have tempered the family snow enthusiasm.  By the time he went to sleep on Saturday night, Timmy was already begging to go outside to play and to throw snowballs. We tucked him into bed with the promise that he would have plenty of time and snow by morning. After catching him sneaking out of his room to peek through the windows several times, he finally fell asleep.

The little rascal woke me up at 5 AM, begging to put his snow gear to go sledding. Let me tell you, that wake up was painful! I managed to convince him to stay inside until the sun was up and my coffee was consumed, but as soon as I gave the go-ahead he was ready to go.

While Scott plowed the driveway and our street, the boys and I played in our newly created winter wonderland. Both boys had a blast throwing snowballs, building a snowman and sledding. We spent the entire day either playing in the snow or warming up and drying out before going outside again. By the time we managed to convince the boys to come inside for the final time the sun was setting and the temperature was dropping.

With schools already canceled for tomorrow, I suspect that the fun will be continued. It has been several years since we have had significant snowfall. I've forgotten about the degree of exhaustion that comes from pulling sleds and dodging snowballs all day. 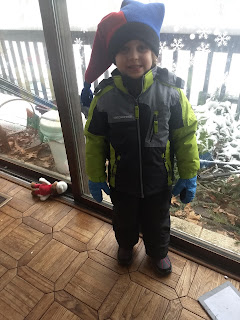 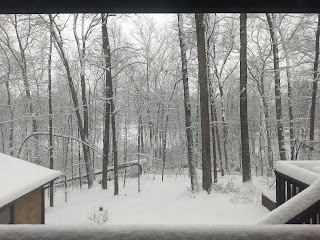