Yesterday was wonderfully exhausting.  I was able to enjoy several cups of coffee before Scott and Robby woke up allowing me some quiet time with Timmy before the chaos ensued. At the time I was anxious for the festivities to begin. In retrospect I am glad that I was able to enjoy the calm before the unwrapping storm.

Robby and Timmy both loved their surprises from Santa. Timmy happily sat in his new wagon while his big brother unwrapped presents. I took him for a ride later in the morning and he giggled the entire time. Needless to say, I think I'm going to log hundreds of miles pulling the little red wagon through the neighborhood in the coming years.

Robby received an electric scooter from Santa this year. Although he was initially hesitant (he isn't much of a daredevil), he quickly learned how to ride. By the end of the day he was whizzing up and down the driveway like a pro.

I was excited to host Christmas dinner this year. Although it was only my Mom and sister (in addition to our little family), this was the first major holiday I have been allowed to host. I was nervous, but in the end it went well. I wanted to keep the menu simple but nice, so I served prime rib, baked potatoes and asparagus.

It wasn't until dinner was served that I learned that I had failed to reach the requisites for a "feast."  According to Robby, the absence of chicken downgraded our meal from feast to dinner. I did think quickly and pulled a bucket of left over fried chicken out of the fridge. My little Koopa seemed happy with the effort and reinstated "feast" status.

Although we didn't really do anything grand for the holiday, we were all exhausted by the time the sun set. I love holidays, but I feel like I need a vacation when they are over! Perhaps my Mom, in her infinite wisdom, was able to foresee my need to escape. She surprised me with a portable hot tub for Christmas! Since I can't seem to get to a spa, she brought the spa to me.  I can't wait to set it up and take it for a test soak. 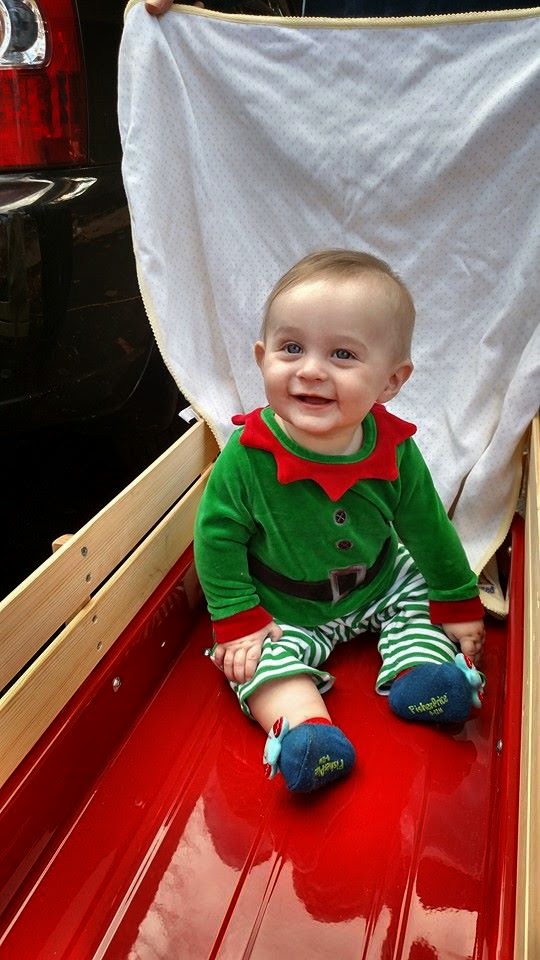 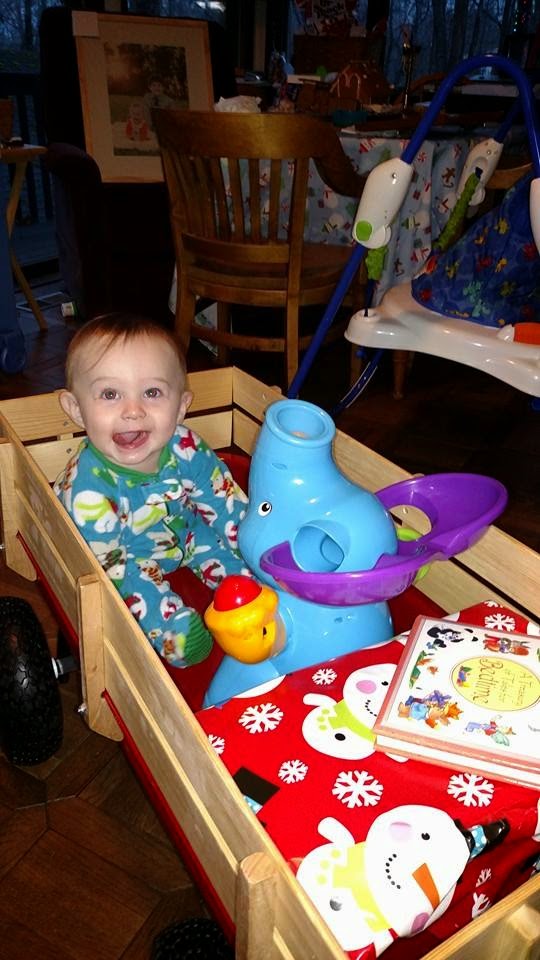 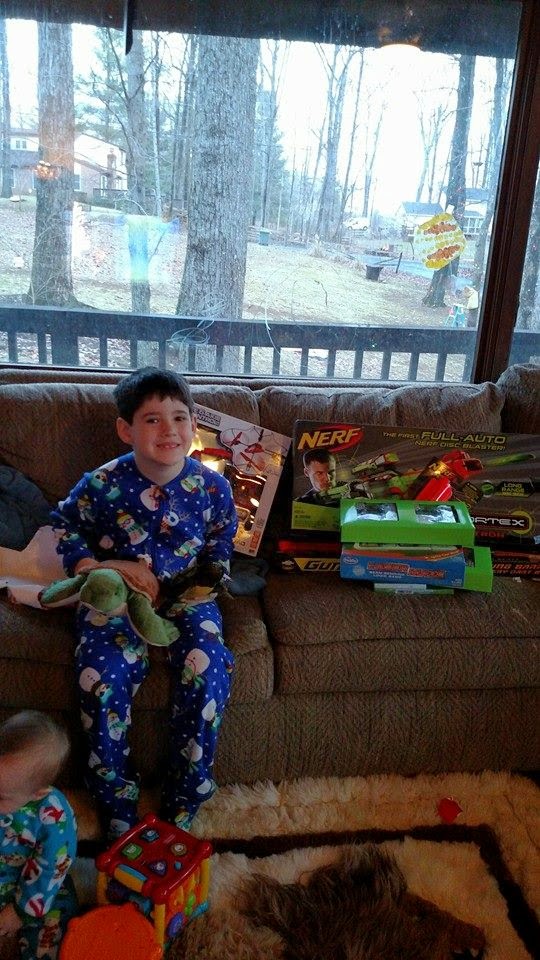 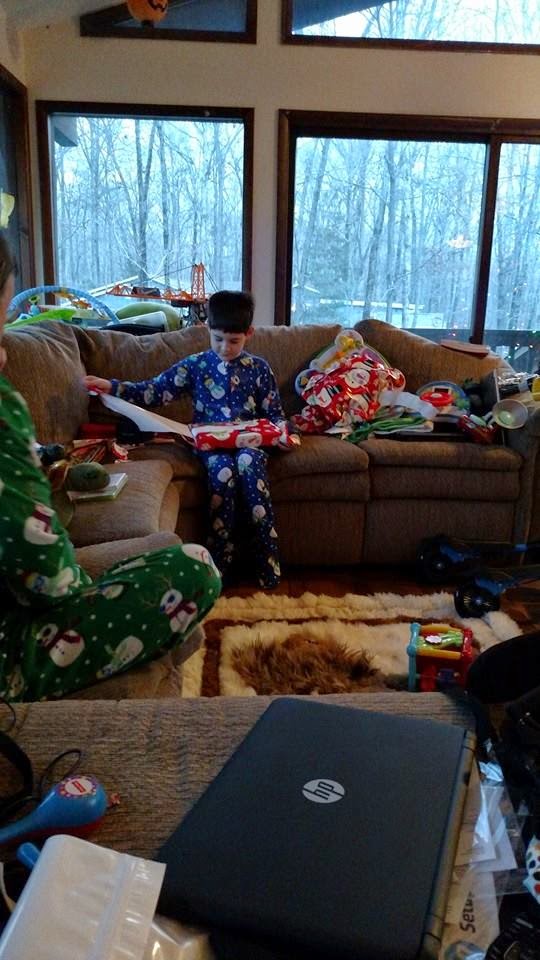 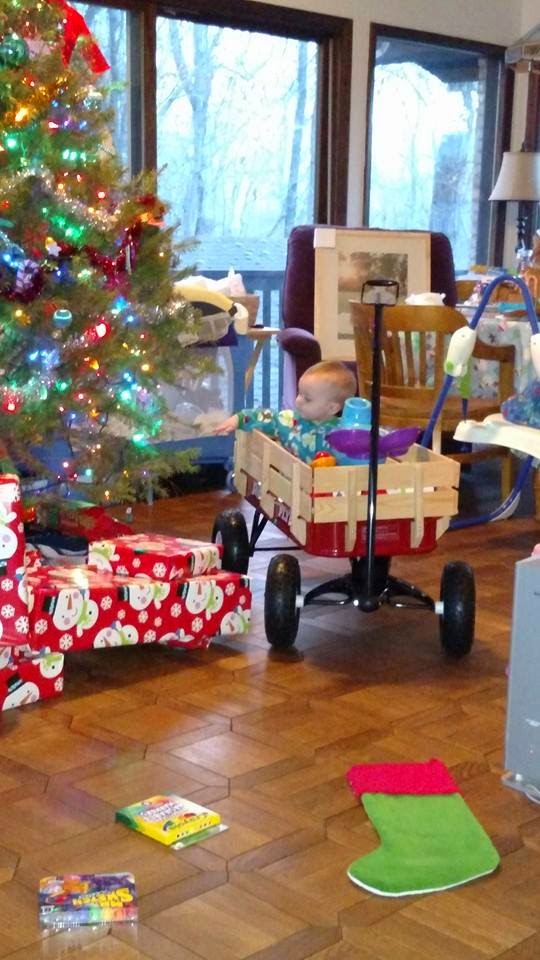 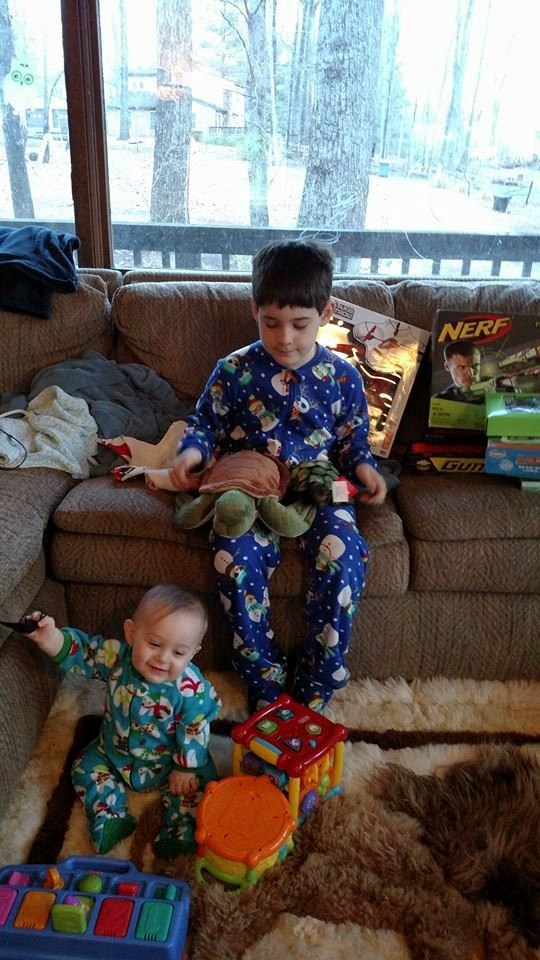 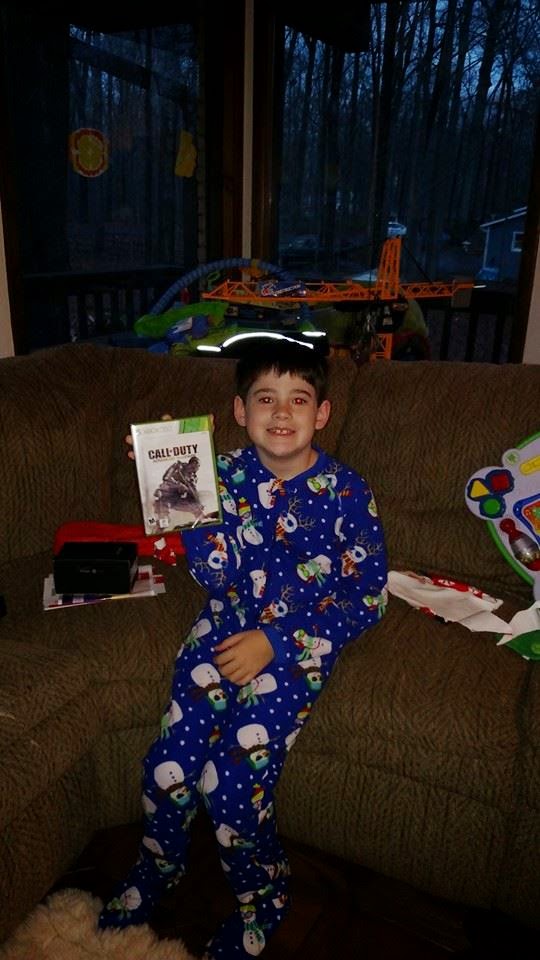 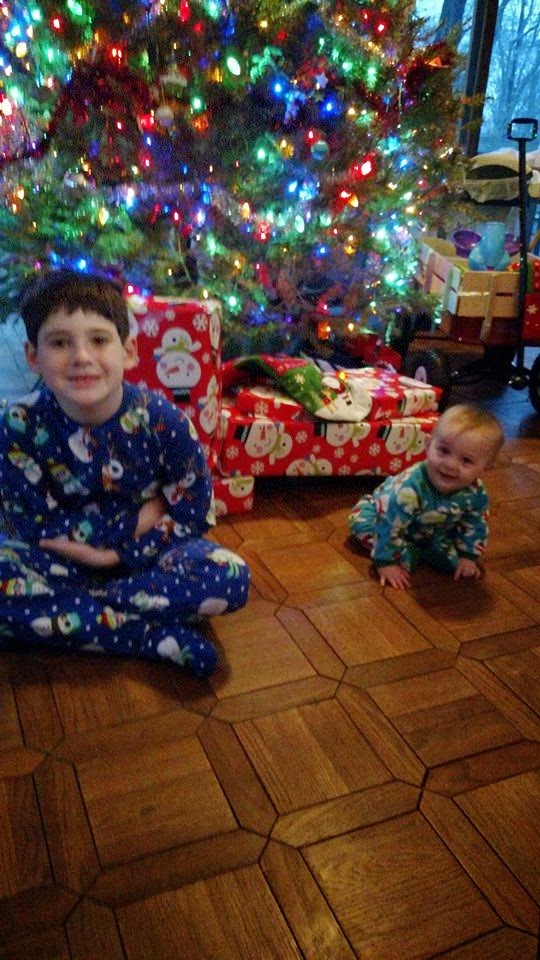 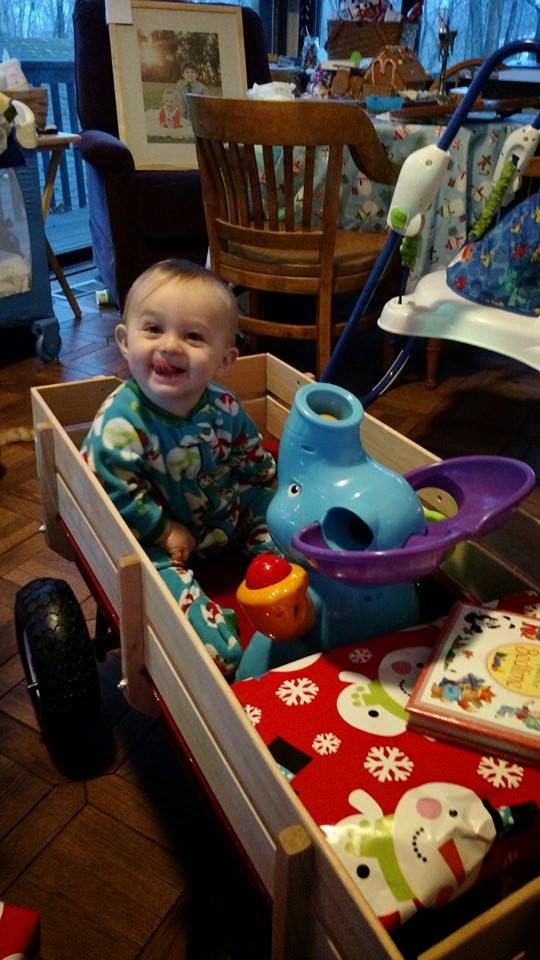 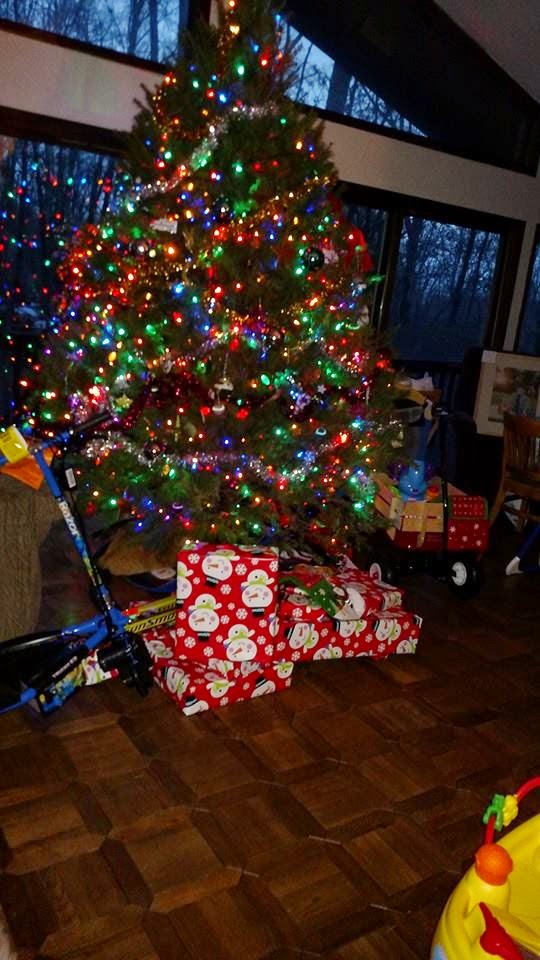 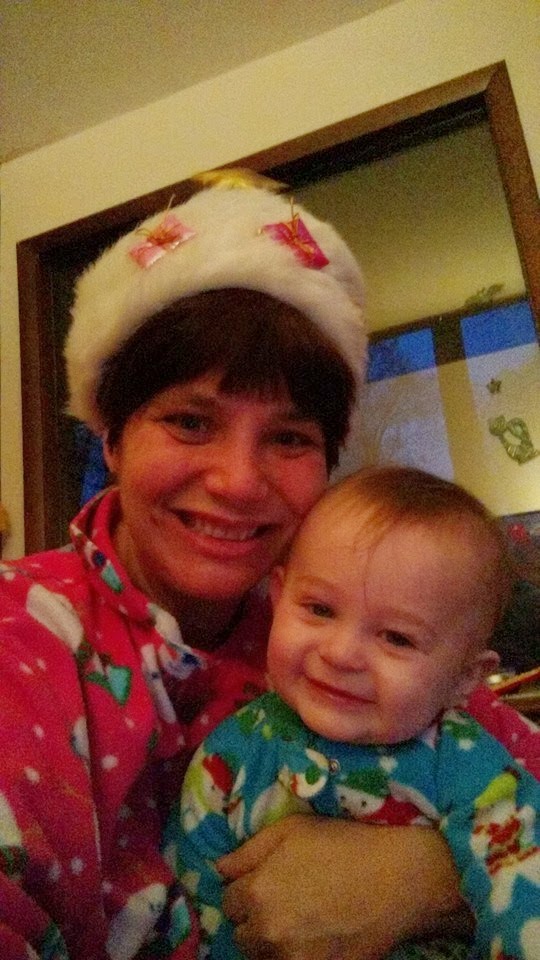 I am writing this as Timmy and I eagerly await his big brother and Daddy, who are still fast asleep.  The Christmas tree looks beautiful with the lights reflecting off the gift wrap of the presents. I think everybody is going to be delighted with Santa's surprises- if they would only wake up!

I'll post photos after everything is unwrapped and the excitement settles down.  I just wanted to pop onto my blog this morning to wish everybody a wonderful Christmas. Thank you for following my journey through this wonderful and difficult year. May today bring nothing but happiness and joy.
at 6:46 AM No comments:

Yesterday was rough. Timmy was on his third day of not feeling well, demanding near constant cuddling and holding. I can't blame him because I know that cradled in my arms was the only comfortable breathing position he could find. I enjoyed holding and loving on him, but after hours of sitting and holding him in the rocker, I began to fret about my looming (and unattended) holiday to-do list.

Halfway through the third sappy Hallmark movie, I decided to embrace the chaos. My Mom and my sister are the only ones visiting for Christmas dinner. They are both well aware of my housekeeping priorities, so I didn't really need to spend an afternoon stashing the clutter to feign some sort of Martha Stewart lifestyle. Please don't get me wrong; my house is not dirty; It is just full.

I fully intended to purge at least one bag of trash a day, but to be completely honest, the movement never took off. I became distracted and busy with family and work. I consoled myself after missing the first day by vowing to clean out two bags the next day. The promises have snowballed, and now I must be 20 bags in arrears. So much for good intentions!

I will start back with my cleaning resolution in the New Year. In the meantime, I am going to spend Christmas Eve baking cookies and playing with my kids. The clutter can wait because, in this moment, I would rather focus on getting ready for Santa's visit tonight!

On a side note, Robby has been invited to participate in a HuffPostLive Chat today at 1:30. He will be posing questions, on behalf of all children, to Christmas "experts." If you want to watch him (either live or archived) the webchat can be found here.
at 6:35 AM No comments:

Well, it looks like little Timmy might be spending his first Christmas sick. He has developed a respiratory infection. His big gummy smile has been absent, replaced by labored breathing and episodes of croup at night.

We have been pulling all of tips we've ever been offered when helping a child deal with respiratory issues. His room is thoroughly humidified. In fact, the air was so dense it assumed a jungle-like feel. Of course, the "sounds of the rainforest" playing on his noise machine did contribute to the ambiance!

Worried about his breathing, I opted to sleep next to his crib. Well, didn't exactly sleep because his little baby snores and coughs kept me awake. Although rest was elusive, I did emerge from his room this morning with my pores thoroughly steamed open. (Hey, I'll take the positives where I can get them at this point.)

I already have a call in to his doctor. I am hoping that she can see him today, and that there is something that can be prescribed to help my little guy. All other holiday festivities are on hold. Right now, I just want him to be healthy and happy for Christmas.
at 7:16 AM No comments:

To say that our home is buzzing with anticipation and excitement would be an understatement. Robby is positively giddy with the prospect of Santa's big visit.  Timmy, although he has no idea what is about to happen, is following his big brother's lead and giggly and happy.

This past weekend we continued with our holiday celebrations by Skyping with Santa Claus and driving through an incredibly detailed (and bright) light display. We assembled our Gingerbread House and train, and even found the time to bake a few dozen cookies.

I know that Robby's believing years are dwindling, so I am trying to absorb as much of his innocence as possible. I have a hunch that he was on the fence about Santa, but our visit to Christmastown sealed his belief for one more year. I am going to be sad when he realizes the myth, but at least I have another few years of creating magic with Timmy!  (And, as a bonus, he is young enough this year to not complain that I am dressing him in costumes.) 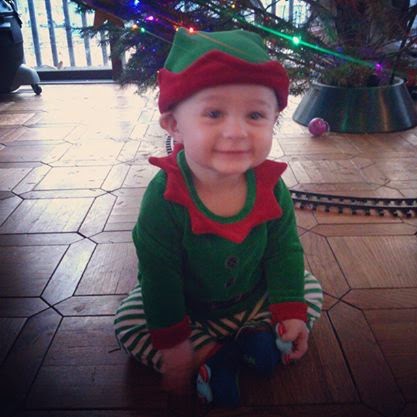