This past weekend we were provided with a preview of spring. I thought mounds of snow would be around until July, but to my delight all of the ugly snow has melted. The temperature was in the high 70's and the skies were a brilliant blue. It was beautiful.

I was excited to sift through my bottom dresser drawer to retrieve my Space Saver bag full of my summer clothes. After a long winter of heavy sweaters and still always being cold, I was looking forward to donning less fabric. I pulled out my favorite pair of capris that, in my opinion, have been hibernating for way too long. Yes, spring has indeed sprung!

I have gotten in the habit of purchasing Robby's clothes a year in advance. When Carter's and Osh Kosh B'Gosh are having the end-of-the-season sale, I typically swoop in and buy a size larger for the following year. I not only save a lot of money, but also I have found that the preparation is convenient. When warm or cold weather makes its mark, I don't have to run to the store to buy appropriate clothing. I only have to dig through his closet to find the shopping bag.

From the pile of new clothes, I picked out an adorable short sleeve shirt for Robby. Because the temperature was only in the 70's, I opted to keep him in long pants. We have several pairs of adorable jeans for him. Unfortunately he refuses to wear anything but his sweat pants. To be honest, the battle over pants is a fight I rarely take on. I figure that the time in life where one can get away with wearing nothing but sweat pants is limited, and I don't want to rob him of this opportunity. After all, I would stay in my comfy sweat pants all day, too, if I thought I could get away with it!

Happy that spring had arrived, I set about getting dressed. I pulled on my blue short sleeve shirt. My uncovered arms felt liberated from the layers of winter. Then, I tried to pull on my pants.

Now, I love my Space Saver bags. I am able to store a lot of clothes in a relatively small area. Despite all of the benefits, I have discovered one problem with the product. Apparently, given a few months within the plastic, an unreported chemical reaction must occur within the fabric of the clothes.

Yes, Space Saver bags apparently shrink clothes. My favorite capris emerged from the bag a tad snug, but they fit perfectly when they were packed away in October. Of course, there could be another explanation for the shrinking clothes. Perhaps the long winter spent baking cookies, cakes and cinnamon buns with Robby is the culprit. On second thought, I think I'm going to blame the bags.

Robby apparently experienced the polar opposite problem with his clothes. He has become accustomed to wearing long sleeves during the winter. When I slipped the short sleeve shirt over his head and had him poke his little arms through the holes, he became frantic.

He started pulling at the sleeves, trying to stretch them over his elbows and forearm. I tried to explain that it was warm outside, so he could wear shorter sleeves like Mommy. I showed him how the fabric on my shirt stopped above my elbow as well. He was not swayed.

Robby became convinced that his arms got bigger, causing him to outgrow his shirt. He went through his closet, insisting on trying on several shirts. Since I had gone through his clothes that morning, they were all short sleeve shirts. His theory was merely solidified. Apparently he drank a lot of milk the night before, and his arms grew "big like Daddy's."

After breaking down into an uncontrollable sob, I relented and found a long sleeve shirt for Robby. He was happy that I found a shirt that would cover his "super big" arms. He simply refused to accept the concept of a short sleeve shirt.

I am going to have to work on Robby's acceptance of short sleeve shirts in the next few weeks. This past weekend, while all of his little friends were running around in shorts, tee shirts and flip flops, Robby was wearing sweat pants and a layered long sleeve shirt. I am also hoping that, as my clothes air out, the fabric fibers will expand. I suppose it wouldn't hurt to increase my exercise routine a bit, and maybe stay away from the cookies, just in case! The great news? It is SPRING! 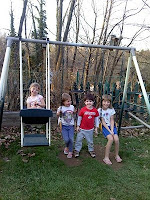 Notice Robby's little girlfriends are all in short sleeves and my little guy is still in his winter attire. I am a little worried. He is becoming quite the ladies man!
at 4:56 AM