Yesterday afternoon I decided to pack up the Cousin Crew and surprise them with a visit to a local street fair.  The organizers of the "Jubilee" tout it to be the longest running (and largest) one day street fair on the East coast and, since it was a beautiful day, I thought we would check it out.  The kids love grabbing free giveaways and with over 300 vendors signed on for the event, I figured that they would have a blast filling their bags with swag.

Donning their tie dyed Cousin Crew shirts, the kids grabbed some empty bags and piled into the car. We arrived relatively early in the afternoon, which allowed us to park relatively close to the fair. As we walked towards the roped off streets we were hit with the wafting aromas of roasting meat, popcorn, french fries and cotton candy. (In other words, the smells of summer.)

The kids went to work searching for loot as soon as we walked into the fair. We methodically went up one side and down another, spinning every wheel and playing every Plinko game. They picked up extra bags when their original one was stuffed. By the time we were done we had walked 17,000 steps and each tween had accumulated four bags of swag.

We had a great time at the Jubilee- with one glaring exception. One vendor, who was advertising hosting foreign exchange students (how ironic) both insulted and mocked Robby's speech impairment. When we first encountered her, she commented on Robby's unique "accent." This is not an unusual response to hearing him for the first time. It is something that Robby and I have both become accustomed to handling. I quickly informed her that he does not have an accent but is working hard to overcome his speech issues.

Usually telling people about the speech issue quells the conversation. Not with this lady. She proceeded to parrot back Robby's words, mimicking his impairment and laughing. Robby was mortified. I was irate. The other cousins were frustrated and angry for him.

We proceeded through the Jubilee, but eventually I decided I needed to do something. Robby (and the Cousin Crew) needed to see me stick up for him. I walked back to the tent and politely confronted the vendor on her response. In a calm tone (for which I deserve credit because I wanted to go ballistic) I let her know that she both insulted and embarrassed my son when she mimicked his speech patterns. She was informed about his impairment, and the fact that he was working hard to correct it, yet she chose to engage in mocking behavior.

She apologized, but I suspect it was more to close the conversation so I didn't make a scene in her tent. I left, satisfied that I stuck up for my child but frustrated that we live in a world where I had to confront an adult for making fun of him.
at 8:44 AM No comments:

At the beginning of this month, while at the World War II weekend with Robby, my liner developed a significant tear along the back of my leg. Because my limb wasn't protected by the silicone, each step was painful as my skin became increasingly raw from the rubbing. By the end of the first day I was hobbling around both in pain and with a horrific gait.

I refused to slow down because I knew how much Robby adored the event, but I was definitely struggling to keep up with him. When packing for the event I failed to put an extra liner in the suitcase, which was a rookie mistake. (I have been an amputee long enough to appreciate that component failures always happen at the most inopportune moments.) Thankfully Scott was coming to the event the next day and was able to bring a new liner to me but I was silently cursing myself for not bringing it with me.

While at the beach with the kids I lost the top of my suction valve. I have no idea when or where I lost it, I only realized it was missing when I couldn't maintain suction in my leg. Thankfully I had my repair kit with me and I was able to replace it quickly. I would have struggled to walk safely had I not been able to pop in a new valve.

Prosthetic failures frustrate me because I am reminded of the vulnerability of my mobility. One tiny tear, or if one small piece of plastic can derail my plans for the day. Thankfully both of my recent issues were easy to remedy, but that isn't always the case. After what happened at the World War II weekend, I won't make the mistake of traveling without my repair kit again!

Although we didn't do anything grand, the Cousin Crew had a great time yesterday.  We had planned on visiting the pool, but (per recent trends) the weather failed to cooperate. The threat of thunderstorms kept us close to home and indoors most of the day.

The clouds broke for a brief period in the afternoon, allowing us to play outside. I pulled out some white t-shirts and the color filled water balloons. After splashing themselves with dye, we introduced another variable by showering them with color run chalk. Soon everybody was running through the yard, squealing and laughing while surrounded by clouds of colorful chalk plumes.

It was fun to see everybody, including my mom and my sister, get into the colorful spirit. My sister was colored with chalk and my Mom had a great time dousing the kids when they ran by her.  Timmy was ecstatic to be participating with the big kids and, since he is by far the smallest, seemed to be the most colorful.

After the chalk packets were gone I had everybody run through the sprinkler to clean off. In the evening we went outside and tie-dyed our white shirts before spending the rest of the time playing games. 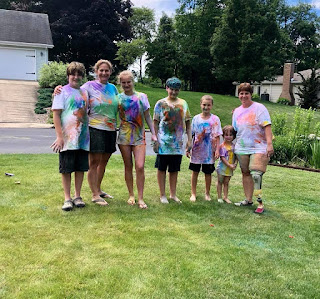 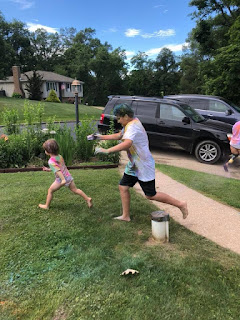 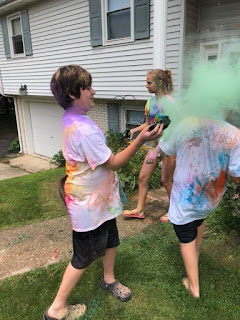 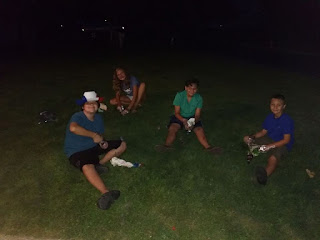 Although Scott is technically on summer vacation, his school system has required mandatory overtime for three days this summer. Receiving compensation for the overtime is some solace for delaying the start of his vacation, but I know he would rather be home than sitting in a school cafeteria for eight hours a day.  Because he isn't going to be home until late afternoon, the boys and I packed up and headed to my Mom's. The Cousin Crew is delighted to be reunited.

We don't have any great plans, but that doesn't seem to have impacted their fun. Last night they stayed up late playing Truth or Dare. Squeals of laughter and commotion filled the house into the wee hours of the morning. I just love hearing them all so happy!

Today I think we are going to an Escape Room in the afternoon. (The kids have been dropping not so subtle hints about a new one that opened in town.) Weather permitting, we are going to go GeoCaching at the local park. It should be fun for all!
at 9:06 AM No comments:

Between the last day of school and Father's Day, our family was motivated to celebrate Scott this past weekend. Saturday morning we packed a bag and headed into DC for a quick family getaway. Scott has been wanting to take the boys to the Air and Space Museum and we were looking forward to playing tourist in our home area.

After we checked into our hotel we headed out to the museum. As we approached the Mall, it became clear that we were not the only family with this idea. The area was wall to wall people, all jockeying to gain an advantage in the security lines forming outside the museum.

Although I tried to make the best of the situation, the museum trip did not go as planned. The crowds were overwhelming, making it difficult to see any of the exhibits. Timmy quickly became bored and was difficult to manage. Tired of his lying down, whining and acting out, I finally ended up abandoning the exhibits altogether. He and I spent our time riding up and down the escalator in the center of the museum while Robby and Scott walked around.

Thankfully the remainder of our getaway was more relaxing than the museum. After walking (and riding) through the museum, we headed back to the hotel. We spent the remainder of the afternoon playing in the pools and playing silly games. Not wanting to risk taking Timmy back into the public domain, we ordered delivery from a local pizza shop for dinner and spent the evening watching a movie in our room.

Yesterday ate breakfast and headed back home. With the sun (finally) shining, we were able to go to the pool. The water was frigid, but that didn't seem to stop the boys from splashing for hours. All-in-all, I think everybody enjoyed our beginning of summer/ Father's Day adventure.