The first week of 2017 is coming to a close, and I couldn't be happier for the weekend. Although Scott and Robby only had four days of school this week, the frustration and stress of returning to a schedule after a long break has been exhausting. I think we all need a few days to recoup and plan for the coming weeks. If I don't get back into a groove, this is going to be a long second semester.

I'm not sure why we were so unprepared for the return to the school schedule, but we were woefully unprepared for this week. Laundry has piled up and we have been forced to delve into the back of the drawers for shirts that almost fit. Lunches have been mediocre because I haven't been able to get to the grocery store. I have been forced to scrounge in the back of the cabinet for adequate (i.e. unexpired) snacks, an effort that is met with complaints daily. We desperately need the weekend to restore our house to school mode.

Work has been busy, making it seemingly impossible for me to get everything in order. When I do have some free time I spend it with Timmy, either playing with his trains or going to the pool. He isn't handling the transition to an empty house gracefully, sobbing each morning as we drop off Robby at school. I know that he misses the excitement of having his Daddy and brother home, and being stuck with me as a playmate is poor consolation. Taking him to the pool each afternoon has been my saving grace in an otherwise ragged week.
at 6:51 AM No comments:

Robby continues to thoroughly enjoy his Taekwondo classes. While I would never label him as athletic, he has definitely improved since he started class. The only time he seemed discouraged was when he was beaten by a six year old girl during sparring practice. He just isn't a physically aggressive person, so leaning in and striking is counter intuitive for him. He will be the first person to stand up in defense of a friend, but being the aggressor is just not in his composition.

Scott and I are not the only ones who have seen a metamorphosis in Robby over the past few months. His teacher commented that he is more outgoing in class and physically confident on the playground. Mr. Bill has witnessed improvements in Robby's coordination, which has always been a weak area because of his hearing issues. As an unexpected bonus, the mere threat of telling "Grand Master" about any snarky behavior is now enough to snap him back into line.

Mr. Bill, although initially skeptical about the lessons, is now one of his biggest cheerleaders.  Robby is always excited to show him the new forms, kicks and strikes that he is mastering. Each time he earns a new stripe he makes two calls; one to my Mom and then to Mr. Bill.  Both are equally proud and excited for his accomplishments.

A few days ago Mr. Bill came over to our house with a surprise for Robby. In anticipation of continued success, he had crafted a belt display holder. Robby was flabbergasted by the gift and almost cried when Mr. Bill presented it. It isn't often that my little Koopa is at a loss for words, but this was definitely one of those occasions.  The display board will be prominently hung in his bedroom. I'm fairly certain that the fact that he has something crafted, with love, by Mr. Bill will mean more than any of the belts that it holds.


**If you live in Northern Virginia, I highly recommend Dynamic Kick.** 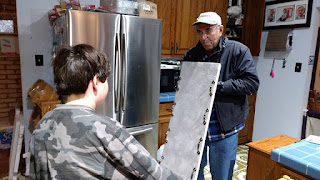 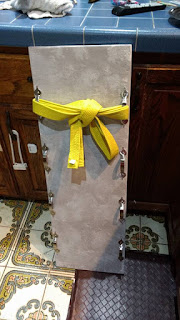 Knowing how much I adore swimming with the kids, Scott surprised me with a pass to an indoor pool for Christmas. I have been chomping at the bit to put it to use but opted to wait until school was back in session. (I knew that the pool would be inundated with school break campers if I went during break.) Yesterday was the first day back to school and after I packed Robby's lunch, I quietly gathered up the swimming gear for Timmy and me.

Timmy squealed with delight when he saw the pool through the window in the lobby. He immediately began jumping up and down, hurriedly tugging at my arm to take him to the water. As I was beginning to check in, the receptionist informed me that the pool was closed for maintenance. I was disappointed, but Timmy was absolutely heartbroken.

I scooped him up and carried him out of the gym, strapping him back into his car seat. He was sobbing, and tears were beginning to stream down his little red cheeks. I tried to explain that the pool was closed, but I knew that it was fruitless because he didn't understand.  All he knew was that he saw a pool and that I wouldn't take him.

Resolved to salvage the day, I decided to try a new indoor playground. Thankfully the lure of brightly colored climbing structures and shiny plastic slides was enough of a distraction from the pool disappointment.  Instead of swimming, we spent the afternoon climbing, sliding, balancing and playing. It wasn't what I had planned for the day, but we still had a blast!

After three hours, my sweaty little tumbler asked to leave. We walked through the security doors into the lobby, where I sat down to put on my shoes. Because it is easier for me to put my sneaker on my prosthetic when it is not attached, I quietly removed my leg and worked to wiggle the shoe into place.

Timmy, perhaps seeing that he had an advantage because I wasn't wearing my leg, took the opportunity to sprint out of the complex.  He took off at full speed, running through the mall corridor. He was dodging people who were in his pathway, smiling and giggling the entire time.  I finally cornered him when he became distracted by the large pancake sign at IHOP.

After reprimanding his behavior and with a tight grasp on his hand, we started to walk back to the playground so that I could retrieve my other shoe and my keys. An elderly lady, perhaps in her late 80s, smiled and began to talk as we walked.  She spoke quietly, with a soft fragile voice.

"Oh my you have a quick one. My son used to run from me like that. So much joy and happiness." She smiled broadly and sighed before continuing, "He's in jail now."  Without missing a beat she looked Timmy in the eye and said, "You can't outrun the fuzz."

I was surprised by both her story and her candor and I didn't quite know how to react.  Without another word, she continued to walk past us and never looked back. I never know what will happen on our adventures!

Ever since Timmy discovered a small Thomas the Train in the bottom of his Christmas stocking he has been entranced. From the moment he wakes up until he goes to bed at night he is playing with his little trains.  My once spacious living room has been transformed into a train depot, complete with a ride-on train that takes up the majority of the the room. My goal is to keep a pathway clear so that I can walk through the room without tripping, but unfortunately I have already smashed one small cargo car. (Wearing a prosthetic in this situation is a mixed blessing. It doesn't hurt when I step on the small plastic toys, but they almost always break under the pressure.)

Playing with the trains has provided Timmy with an outlet and a focus that, in retrospect, he was lacking. He is no longer the hardcore mischief maker that I was trying to wrangle before Christmas. Don't get me wrong, he still has his moments of curious and naughty ventures, but overall he has calmed down. I think that much of his behavior was due to boredom. While he had a lot of toys, nothing really piqued his interests until he discovered Thomas.

Last night Timmy and I dug out all of the track pieces, trains and buildings that mesmerized Robby. The toys are now Timmy's, and his enthusiasm and joy is mirroring his brother at that age. I remember feeling sad when I finally accepted that Robby had outgrown playing with his beloved trains. Bringing them out again and setting up the train table brought me an indescribable sense of happiness. I absolutely love the train phase! 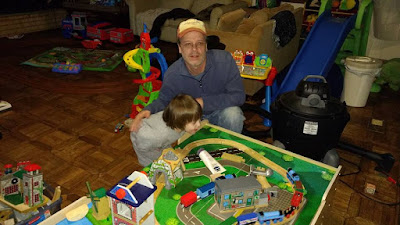 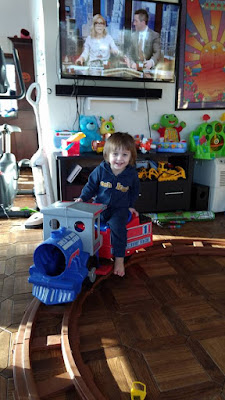 It seems that Dave and I always end up plotting and scheming (in a good way) when we get together in person. When we were in New York last month for the award ceremony, we ended up huddled in a corner trying to figure out a better way to help our podcast listeners. Our spouses were extremely patient as we sketched and planned throughout the evening. It wasn't long before we began laying out and building a complementary website.

From our swanky new logo to a stellar toolbox (which is light right now but will become heavier as more podcasts are recorded), we are delighted to reveal our new website.  Ampdpod.com will be updated to coincide with the release of each new podcast episode. In response to feedback from friends and members of the limb loss community, we have provided in depth reviews of our podcasts to facilitate access for those with hearing impairments.

Our Toolbox houses helpful forms, guides and other information we reference in the podcast. Currently we have created a downloadable form for helping our listeners conduct interviews with Prosthetists before choosing a practitioner.  We encourage everybody to print off these interview questions as you search for appropriate care.

In our Toolbox will also find our five step method to winning insurance appeals.  (Battling insurance appeals is a passion for us!) Our step-by-step guide for winning your prosthetic insurance appeal is referred to in the industry as the "McGill method" and has, until now, only been available to practitioners and billing specialists who have attended seminars and training. We are excited to provide it to our listeners.

Please visit us at www.ampdpod.com and check it out. We invite you to subscribe so that you never miss an update or recording.