This picture just makes me smile... Someday I hope Robby will realize how much I love him! 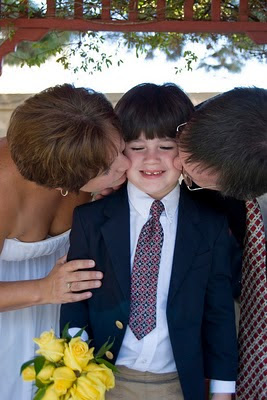 And thanks Dave, for everything you've done to help me and for giving me away! 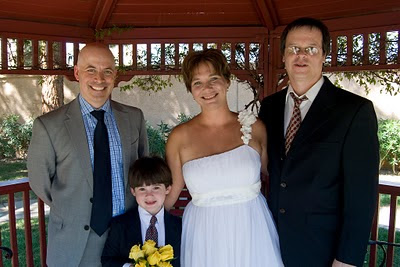 Sometimes I think it is strange how my amputation has impacted various aspects of my life. I knew that it would affect me physically, psychologically, and socially. I had no idea how much my limb loss would affect my fashion decisions.

I have never been a Fashionista. If a garment is pretty and doesn't make me look fat, I am satisfied. If it is on sale, I often overlook the "pretty" requirement.

Shoe shopping has been especially challenging since my amputation, and I know that I will soon need a pair of winter boots. My little guy turns into a snow bunny and can play in his winter wonderland for hours at a time! While he is snug and warm, the snow becomes packed between my sneaker and my sock. I am cold and uncomfortable within 15 minutes.

I have searched for a solution to my boot dilemma. Because of my prosthetic. it is difficult for me to slip my foot into a boot. I require a large opening in order for the foot shell to slip inside, and because I don't have ankle movement, I need the opening to extend to the bottom of the boot so that the angles are minimized. The boot material must come up over my Proprio ankle, but must not be form fitted. The ankle moves and cannot be contained.

With all of these requirements, I gave up on the boot being cute. I was willing to settle for anything that would work, regardless of its visual appeal. When I found a pair of boots with a large opening, the ankles were too severe to allow my foot to slide in. We looked into a pair of goulashes, but they were too heavy. The weight of the material would have caused my leg to lose suction. That would not be a good thing when sledding!

I had all but given up and accepted my chilly foot fate. Every search left me feeling deflated and frustrated. It is strange how one small failing, such as not being able to find a pair of boots, can amplify every negative feeling I have about being an amputee. I was close to giving up.

I suppose that the adage "it always comes when you aren't looking" is true for more than finding a soul mate. It also applies to finding the perfect boot! Not only do the boots possess every attribute necessary, they are cute. And the best part? They were on sale! I will be ready for winter!
at 4:56 AM No comments:

Despite the seemingly endless hours standing on my feet and, to my chagrin the addition this year of a treadmill to our exhibition booth, I thoroughly enjoy working at prosthetic conferences. I love meeting participants from all over the world whose common goal is restoring mobility and creating a high quality of life to amputees. The field of prosthetics is going through a metamorphosis as new technologies are making possible what was once conceived as science fiction.

Yesterday while I was standing in the booth, I witnessed a sight that I will never forget. I saw a paraplegic woman rise out of her wheelchair and walk around the exhibition hall. She was wearing an exoskeleton system on her legs and utilized crutches for stability. Seeing her begin to walk was like witnessing a miracle, and I began to cry.

In many ways, advances in computer and bionic technology is miraculous, especially for those who will benefit from these devices. I saw prototype prosthetic hands that restored the sense of touch for the upper extremity amputee. Imagine being able to feel your child's hand for the first time. Surely that would be a miracle for the amputee who has not dared to dream of that possibility.

Sockets are being designed that will accommodate for volume fluctuations utilizing a smart phone app. The inconvenience of constantly donning and removing socks to achieve a comfortable prosthetic will enhance the quality of life for lower extremity amputees. This technology is being developed and will hopefully be brought to market within a few years.

The engineers, researchers and prosthetists that are pushing the boundaries of technology are creating miracle devices. I am honored and impressed that many of these individuals have taken the time to talk to me during the past three days as they have seemed sincerely interested in the real struggles and barriers that amputees encounter everyday. I am leaving Las Vegas with sore feet, an achy back and an excitement about the future for amputees.
at 5:01 AM No comments:

After Scott and I renewed our vows we celebrated Las Vegas style, by going to an all-you-can-eat buffet dinner. Although I am generally not a fan of buffet style restaurants (I commonly refer to them as browsing at the trough) I know that they are a Las Vegas tradition. Thanks to my sister Sheri who first exposed Robby to this style of dining, he is now a huge fan and was excited to go to what we promised to be the biggest buffet of his young life.

Many things in life fail to meet the hype generated, but the Las Vegas buffet at the Rio Casino exceeded all of our expectations. To describe Robby as glutenous would be an understatement. My little five year old ate three plates of food, promptly followed by two bowls of ice cream and four cookies. He was a happy little boy. I thought we were going to have to roll him into the taxi cab when we were finished!

Robby wasn't the only one who overate. Scott had two plates of crab legs followed by tacos and a variety of assorted carbohydrates. I ate more than my share and consumed so much salt that my leg didn't fit by the end of our meal. We all waddled to our hotel room and promptly fell asleep, likely the result of a food induced coma.

It is hard to believe that in the last 36 hours I renewed my vows, ate an obscene amount of food, packed up my family and returned them to Virginia while working in a conference exhibition booth for ten hours. I returned to my hotel room last night physically drained. I was also struck by the deafening silence.

Today I will be working in the booth all day and I'm looking forward to talking with new and established friends. I love working at these conferences because the change provides me with a unique respite from my normal life. That being said, I hope that the next 48 hours are less hectic but pass as quickly as the past 36. I miss my family.

Yesterday was a whirlwind of excitement. Our wedding was a beautiful event and created memories that I will cherish for a lifetime. Please excuse the brevity of this post, but I am exhausted from all of the Las Vegas excitement! Scott and Robby leave for home today, leaving me here alone. I'll miss them, but I will have more time to write when I am here alone.

In the meantime, I wanted to share the ceremony with everybody.

Hello from Las Vegas! We arrived safe and sound on Friday afternoon which felt like Friday night because of the time change. After a quick dinner, we were tucked into bed and sound asleep by 9:00--pathetically early by Vegas standards.

Saturday morning we woke up early and became gluttonous tourists at the breakfast buffet. We then hopped on a bus and headed out to visit the Hoover Dam. Although I don't fully understand why, I appreciate that touring the Hoover Dam has been a dream of Scott's. He has spent countless hours mesmerized by documentaries featuring this engineering feat. Sitting on the bus next to him I realized that I haven't seen him that excited since the Ohio State Buckeyes won the football championship ten years ago.

Spending the afternoon sitting on a tour bus and walking around a Dam would not have been my choice, but knowing how much it meant to Scott, I could not have envisioned a better way to spend the day. Robby and I dutifully followed behind Scott throughout the tour, taking pictures and absorbing the experience. I had to chuckle when Robby looked at me and said, "Momom, Daddy sure does love the dam." I'm not sure who provided more information about the structure on the tour, the guide or my husband!

It is impossible to tour the Hoover Dam and not to be impressed by the engineering marvel of this concrete structure. I couldn't help but think about the hardworking men who labored to build it. The work ethic that gave birth to that project seems to be gone in this country, but I digress.

On our tour we were taken inside the generator room where the hydro electricity is harnessed. At the time three of the eight generators were running. This was probably Scott's favorite part of the tour, and unfortunately it was the part I couldn't wait to leave.

I don't know why (and if anybody has an explanation please share it), but my stump immediately began to respond when I entered the steel doors of the generator room. It felt like my leg was being stimulated by a TENS unit placed on high. The buzzing sensation wasn't painful, but it certainly was not comfortable. The longer I stayed in the room the more intense the stimulation became; it felt surreal.

Although I tried to listen to the guide's rehearsed speech about the generator room, I had to leave early. I simply couldn't stand the discomfort of the electrical buzzing in my socket. As soon as I left the room and stood on the opposite side of the steel doors, the sensations disappeared.

I spoke with the guide at the conclusion of the tour about my experience, but he was as perplexed as I. Obviously the electricity being generated affected my residual limb, but I don't understand how the two are connected. I'm curious if other amputees have had similar experiences.

Despite the buzzing stump, we thoroughly enjoyed our tour. I loved that Robby and I were with Scott when one of his dreams was realized. Although he is only five, I hope that one day Robby will look at the pictures and realize how much the day meant to his daddy.

Our Las Vegas adventure continues today as Scott and I renew our vows. I'll post pictures and the video as soon as they become available. Please think of us at 2:00 because I'm "goin' to the chapel and I'm gonna get married!"
at 5:09 AM No comments: