Off to Pumpkinville (again)

Oh my goodness this has been a long week. The trip to New York certainly through me off schedule, and I've been playing catch up ever since I returned. I'm looking forward to a few days of a more relaxed schedule so I can try to get back on track. I feel like I've been spinning my wheels just to stay afloat.

Today will not be resting but instead we will be playing. Scott and Robby are enjoying their first official vacation day of the school year. On one hand it is hard to believe that the school year is 25% over, but at the same time it feels like an eternity since the first day of school.  We are desperately overdue for a family fun day and we plan on making the most of today. I think we are all in need of a day untethered from technology and the stresses of life.

After an IHOP breakfast we will be headed to Pumpkinville. Robby has been eager to go for weeks, and Timmy will be excited by proxy.  Because we have a yearly pass Timmy and I have already been to Pumpkinville this year. Even though it won't be new to him, I'm sure Timmy will relish the opportunity to play with his brother and Daddy at the autumnal extravaganza. After all, there is nothing better than playing outside with his big brother.

Tonight Robby has a costume Halloween party, another event he has been looking forward to for weeks. After spending the afternoon playing outside and going to a party tonight I expect he will sleep well. If only his brother would follow his lead!

After weeks of hearing incessant squeaking, I finally made the trip to Elliot. I had wanted to go earlier but the kids' schedules became out of control and I just couldn't fit the visit in between my chauffeur duties. (Side note: I love that Robby is becoming involved in activities but my goodness the management and execution of the schedules is exhausting!) The squeaking finally broke me down and forced me to rearrange my morning so that I could get it fixed.

Unfortunately the squeaky source was not the spectra sock. It turns out that the sound seems to be coming from the carbon fiber footplate. Elliot couldn't fix the issue so my foot is en route to the manufacturer. I am wearing a loaner and should have a replacement in a few days. The inconveniences of appointments and the vulnerability of device breakdown are both frustrations that I hate about being an amputee. When I'm forced to ferry to and from the prosthetist office for adjustments, repairs and replacements I begin to envy those who do not have to live with these issues.

Of course, biological body parts also encounter issues so I am trying to count my blessings that my fix is more of an inconvenience than an obstacle. At least my foot issue is easy to remedy and is pain free. I will be forced to change schedules again so that I can pick up my new foot when it arrives, but looking at the bright side at least I am receiving a replacement without a battle.
at 7:15 AM No comments:

Robby has developed a strong interest in and appreciation for art. Over the summer he happily explored all of the art galleries on the boardwalk, carefully critiquing and choosing just the right pieces as souvenirs.  When given the option he has been reading biographies of artists and spends his free time drawing and painting.

In an effort to encourage and to develop his interests, we have signed him up for an after school art program. One day a week we drive from his school to the art studio where he receives both individual and small group instruction from a talented (and ultra patient) art teacher. The teacher guides the small class through creating a new piece while focusing on a new medium and art form each week. He is learning about different types of art, art history and practicing methods. Art days have quickly risen to his favorite and he anticipates going each week.

Yesterday during art they were focusing on refining basic drawing techniques. Robby practiced shading and learned how to draw various shapes using three dimension illusions. When he was done with his projects, the teacher instructed each student to create an illustration showing an activity that they enjoy with friends.

When I went to pick him up from class Robby he proudly showed me all of the class illustrations that were pinned to the wall. One student drew a soccer field. Another drew a few kids riding bicycles. A tween girl drew a baking scene. My kid drew a bar.

Ugh! Of everything that he could have depicted! I tried to explain the drawing to his teacher, who was quasi wide-eyed and tentatively nodding as I rambled a justification. I knew that his illustration was not exactly what was interpreted, but I felt like I was just digging a hole as I tried to explain the backstory.

Robby and his cousins spent a lot of time together over the summer. One of their favorite activities became staying up all night long playing poker. My Mom bought them poker visors and chips. I suppose it is important to point out that no real money was ever exchanged and, in reality, they are playing Black Jack and not poker.

The cousins transformed my Mom's sun room into the nighttime Kid's Bar, where they spent hours each night playing cards and giggling. They drank milk out of shot glasses and assorted stemware, laughing and pretending to be metropolitan. They all loved hanging out in "their bar" and often shunned adults because we were overage.

Robby's bar illustration was exactly what the teacher requested: his favorite activity to share with friends. Unfortunately many of the nuances were not conveyed through his drawing and to the unknowing eye it looks like he enjoys hanging out at the bar and drinking with buddies. Even though I tried to offer the explanation, it is a difficult bell to unring. 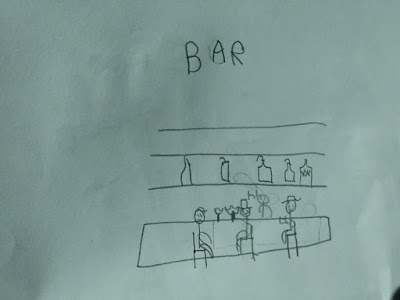 Whew!  Yesterday was a whirlwind. I woke up before dawn and left for the train station.  By the time the sun was rising I was well on my way to New York with hoards of other commuters. With my computer in one hand and a cup of coffee in the other, I was ready to tackle the city.

I don't know why I failed to anticipate the train being crowded when I envisioned the trip. For some reason I imagined spreading out, using quick wifi and relaxing during the three hours of solitude. My reality was far less glamorous as I was crammed against a window after abandoning all attempts at doing anything productive on the weak and intermittent wifi signal.  I didn't get as much work done as I had hoped, but I did enjoy delving into a good book which is a luxury I haven't enjoyed in a long time.

My meeting in New York was productive and well worth the time and monetary investment to attend. After two quick hours I was packing up my computer and heading back to the train station. The train ride home was not nearly as crowded. I probably could have logged onto the internet signal but my mind was frazzled and I just wanted to relax and regroup.

I may not have finished my work projects, but I did become lost in a wonderful novel so my travel time was put to good use.  Today I'll head home and the next few days will be playing catch up but it is all worth it!
at 6:18 AM No comments:

Another week is beginning, and my schedule is already feeling overwhelming. Today I'm waking up in Pennsylvania, where I am catching a predawn train for New York City. After an important lunch meeting (wish me luck) I'll hop on the afternoon train back to my Mom's. I'm investing six hours on a train and five hours of driving time into today's meeting. Hopefully it will be worth it!

Even though the day will be exhausting, I'm looking forward to the time on the train. It isn't often that I have several dedicated hours of quiet time, with nobody to entertain. I'm planning on using the time to finish some looming projects and to (dare I wish) get ahead.  Hopefully the internet on the train cooperates with my plans.

While I'm in New York, my Mom will be playing with Timmy. I am so thankful that she is willing and able to help me when I need backup. I am sure that the pair will have a wonderful day at the park, and I have no doubt that they will both be tuckered out by the time my train pulls back into the station tonight.
at 5:24 AM No comments: