I can't believe that it is true, but I am actually feeling guilty for not going to the gym this week. I still don't enjoy working out, but I did come to appreciate how I felt at the end of each session. I pledged to keep going once everybody returned to school, but that promise has gone down in flames. Between sick Timmy and my leg sore, I have failed miserably at maintaining my gym schedule.

I was flirting with going to the gym yesterday but the tenderness on the back of my leg led me to rethink that decision. I realized that I wasn't healed enough to put my limb through an intense 30 minute workout.  As much as I wanted to sweat and get back into the groove, my desire to completely heal and recover took priority. Sometimes I really hate being an amputee dealing with skin issues!

Hopefully my leg will continue to make progress and I'll be able to return to the gym next week. In the meantime, I am going to try to remove the self imposed guilt. I had to take a respite because of family and health issues, not because I quit. A setback of a few weeks is not going to deter me from my goal, and in the long run it is only a blip.  Now maybe if I keep reminding myself of this I will actually start to believe it!
at 7:00 AM No comments:


Unexpected surprises are definitely the best!  Yesterday Scott was late coming home from work, leaving me to fear his mood upon arrival. Between meetings and paperwork, he has put in a lot of extra time this school year. He doesn't mind putting in the time if it will directly benefit the kids, but meetings for the sake of holding a meeting tend to wear on his nerves.

It turns out that his delay was not because of a meeting but because of a shopping detour. Unbeknownst to me, he was working on a surprise. I was absolutely flabbergasted when he presented me with the box containing a shiny, powerful new smartphone. Sometimes he frustrates me to exhaustion, but he is also capable of completely surprising me.  Yesterday was definitely one of those occasions.

While he took Robby to Tae Known Do, I tucked Timmy into bed and settled down to set up my new phone. It took me a few hours to migrate everything off of the cloud, but my device is now ready to go. I am looking forward to breaking it in (figuratively definitely not literally) and start putting it through its paces.
at 6:23 AM No comments:

Not My Best Day

Yesterday was not my best day. I struggled to find my groove with just about everything. From burning Robby's waffles in the morning to spilling Timmy's dinner all over the kitchen floor, I was just having one of those days where everything went wrong.

In the middle of a report I came to the realization that my laptop is on electronic hospice.  I know it is a matter of time before we need to part ways and I buy a new one, but I despise the entire process. Having to reload my programs and reconfigure everything so that the transition is smooth is both laborious and expensive. I try to put it off until I have no choice. In the meantime, I am constantly restarting, exiting programs and waiting for the circle of death to subside so that I can finish writing my sentence. My computer ailments only served to intensify my frustrations.

I was happy that Scott took Robby to Karate last night, allowing me an hour of complete quiet after Timmy went to bed. Unfortunately about 10 minutes after they left I developed a migraine.  I only experience migraine headaches on rare occasions, typically no more than one every two or three years. Many of my friends suffer with frequent migraines and, after my experience last night, I consider myself lucky that I only endure the agony every few years.

I went straight to bed and waited in the dark for the pain to go away.  Eventually I fell asleep, and I'm feeling better this morning. I'm hoping that today is a better day, because I certainly don't want a repeat of yesterday!
at 6:35 AM No comments:


Considering that a sore on my limb rendered me immobile Saturday evening, I am amazed at my recovery. I have progressed from crawling around on a hotel room floor because I couldn't wear my leg to walking and chasing after Timmy with minimal discomfort. Every once in awhile, usually when twisting, I felt a sudden reminder of the sore. I will definitely take occasional bites over constant pain!

I am not sure how I hurt my limb, but I suspect that my skin became pinched in the socket during the long drive to western Pennsylvania. After more than a decade as an amputee, I'm always surprised when I have a new experience. Unfortunately, at this stage in my post-amputation life, new experiences tend to lean towards the negative. Thankfully I am experienced enough to render proper limb triage when these situations arise, allowing me to heal quickly.

The pain in my limb certainly did not help my affect over the weekend, but I am feeling much better now. Not only am I physically healed, but I feel an emotional closure that I was lacking. I will always miss my Dad, but I am now able to filter through all of my memories and feelings surrounding our relationship. It was far from ideal, but instead of dwelling on the "what ifs" I am going to hold onto the happy memories.

I learned a lot from him professionally, and I am going to continue to apply those lessons throughout my career. By remembering and trusting the professional advice he imparted, I am keeping his memory alive.  I will always miss him, but I have gained some perspective and peace over his passing. Even though it was inconvenient and a difficult weekend, the unveiling was good for me.
at 4:38 AM No comments:

This past weekend was both emotionally and physically exhausting. Saturday afternoon, after watching Robby march in the local parade, I packed up and drove 5 hours to Butler PA. I wish I was leaving for a happy occasion, but my purpose was emotionally driven.  My Dad's tombstone was unveiled on Sunday in a solemn graveside event which marked the end of Shiva.

Scott stayed at home with the boys. I quickly realized that traveling to the event by myself only exacerbated the emotions of grief and loneliness. Too much time alone with my own thoughts was definitely not a good thing! My mind began to swirl with bittersweet memories, frustrated thoughts and anger as the drive progressed.

I opted to drive straight to the cemetery to visit with my Dad instead of checking into the hotel and relaxing. I knew that I wasn't supposed to see the stone or visit the grave until the ceremony, but I figured that he would understand. I wanted some quiet time to reflect, outside of the eyes of others.

I'm glad that I saw the headstone before it was officially unveiled, because I'm fairly certain my 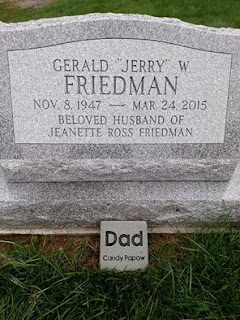 reaction was not appropriate for the religious ceremony.  Thankfully I knew what to expect and was able to take a preemptive action. I placed my personal touch onto his grave before the unveiling. (Insert cheeky grin.)

Unfortunately the long drive caused a large blister to form in the middle back of my limb. By the time I arrived at the hotel I could barely walk because of the pain. I spent the remainder of the night with my leg off, crawling around the hotel room. (The fact that I opted to crawl around a hotel room floor instead of putting on my leg should serve as an indicator for the amount of pain I was experiencing.)  Thankfully by the morning the blister had popped and I was able to slip into my leg with only moderate discomfort.

After the unveiling and lunch I headed home, where I encountered both rain and Steelers traffic. My frustrations reached the pinnacle when Scott called to ask me to swing by the grocery store to pick up toddler formula for Timmy. After spending the day at the cemetery and driving 12 out of the past 30 hours, the last thing I wanted to do was trudge through a grocery store. But I knew that Timmy needed it and I had no option but to make the stop.

I finally rolled into my driveway around 9:00, where Robby met me in the driveway. His hug immediately soothed the pain I was feeling. I'm looking forward to a drama-free, quiet week.  Fingers crossed it becomes a reality!
at 7:29 AM No comments: