From Angst to Ire

Motherhood is full of highs and lows. After a successful observation, we were floating on Cloud 9 believing that we had finally settled on a new school for Robby. Yesterday I received a phone call that felt like a kick in the gut, plummeting me into disbelief and despair.

A representative from the little Montessori school on the side of a mountain called me to inform me that Robby was not welcome to attend their school. Concerns about his hearing, coupled with references to being able to "articulate within the community" were the reasons provided.

She kept stating that they were not equipped for special needs, which was odd because Robby does not require any special services.  I was going to argue that he does not have an IEP nor does he require accommodations other than sitting on the left, but I quickly realized it was pointless. It would not be advantageous for anybody, especially Robby, to attend a school where his unique perspective, gifts and talents are not wanted.

The representative from the Montessori school on the side of a mountain seemed upset when I stated that we were disappointed but we did not want to send Robby somewhere that he is not wanted. She began to backtrack her conversation with excuses about not being equipped to serve his needs. In lieu of telling her to f*ck off, I simply ended the conversation said hung up the phone.

I spent the majority of the day in tears, devastated and disappointed for my Koopa. It breaks my heart that something that is out of his control is being used as a mark against him. In this day and age, I am astounded at the amount of discrimination still rampant in our society. I expected more from the Montessori school on the side of a mountain.

I keep replaying the conversation, and her references to being able to "articulate within the community" keep sticking out. In my heart, I believe it was Robby's speech impairment that kept him from being admitted. The Montessori school on the side of a mountain strives for homogeneous group of students who can be paraded within the community. A child with slushy speech does not fit their mold.

This morning my tears have dried and my angst has turned to ire. Robby does not yet know, but Scott and I are agreed that we are simply telling him that they do not have room in the class for more students.  Today I am revamping my search for a new school. I know that the perfect one is out there. Robby is a smart kid with a wonderful sense of humor and strong standardized test scores. He will be an asset to any school lucky enough to have him enrolled.

I'm relieved that we discovered the true colors of the Montessori School on the side of a mountain before it was too late!
at 6:52 AM No comments:

Timmy loves playing on the steepest tube slide at the farm. The slide goes down at a high angle, which is probably the reason that he is drawn to it. The entrance to the slide can only be accessed by walking up a narrow gravel pathway, flanked on each side with a fence and thick brush and prickle bushes. Because he can only go in one direction, I typically park myself on a bench at the bottom of the slide to watch.

Everything was going well until he slid down without wearing his Thomas the Train boot. Assuming that he left his boot either in the slide or at the top of the hill, I told him to go get his boot.  He happily took my hand and led me to the side of the sliding hill. That's when I saw it, and I instantly knew that we were in trouble.

His bright blue boot was positioned among the thickets, about half way down the extremely steep (and roped off) hill. My mind began to analyze the situation as I tried to figure out if I should just leave the boot or try to retrieve it.  Because he needs the boots, I quickly resolved to try.

I managed to get over the fence, but walking to the boot was arduous. I was forced to sidestep because I didn't want to lose my footing. Trying to maneuver my way with a prosthesis was particularly frustrating. I slipped a few times, but thankfully I never fell. I was cursing Thomas the Train with each step.

After about 20 minutes, I had finally retrieved the boot. It took me another 10 minutes to get back to the slide, where Timmy was ecstatically cheering my return. We put on his boot and I pulled him away from the slide. It isn't something I would like to repeat, but I am proud of myself for managing the terrain to retrieve the lost boot! 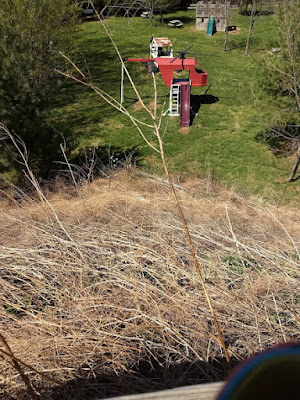 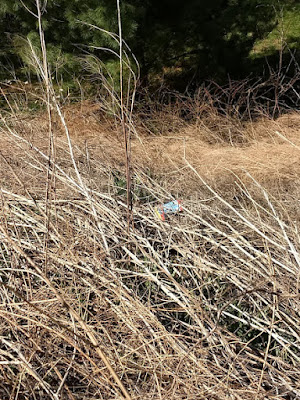 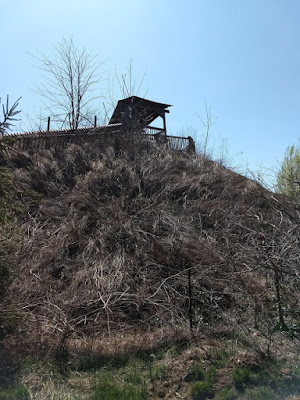 Robby had the opportunity to spend the day in what could become his new classroom. He was understandably nervous to walk into a strange setting filled with new people. Despite his nerves, he handled the experience like a seasoned pro. I'm so incredibly proud of him!

I woke up early to bake cookies for him to share with the class and the teacher. Since many of the students could become his classmates next year, we decided that sharing a treat during the visit might contribute to making a favorable impression. I couldn't help but think about my Dad as I was baking cookies at 6 AM.  He emphasized that bringing donuts or treats to the office can go a long way towards relationship building, and I had to smile as this tradition was being passed down to Robby.

With cookies in hand, Robby tentatively followed the teacher into his new classroom. I couldn't help but worry about him throughout the morning. It wasn't until I received a text message from him, asking to stay longer, that I began to relax. If he wasn't having fun, he certainly wouldn't reach out to stay longer.

My little Koopa was all smiles when I picked him up. The students were nice and welcoming, and the classroom setting was comfortable and relaxed. Robby particularly enjoyed caring for the chickens, which are a permanent fixture because the school is located on a farm.

With everybody on board, we are going to make the change official but completing the paperwork. Despite his inherent aversion to change, Robby is excited about going to the new school next year. I feel relieved, and I cannot wait to watch him grow through this new academic adventure!
at 6:51 AM No comments:

Hiding Out From Hootchie Mama

The the muscle aches and pains from middle age creeping up and intruding on my life, I have no problem remembering that I'm an adult. Most of the time I have the confidence that comes with maturity. Yesterday afternoon was not one of those days. As I found myself avoiding a woman by hiding out in corner of a Chick fil A playground, I felt like an insecure teenager.

My visceral reaction to spotting her in the restaurant took me by surprise. I have never had a confrontation with her, but I have always found her to be annoying. Scott and I dubbed her the "Hootchie Mama Karate Chick" because of her propensity for flaunting exposed thongs while being the loudest and the most obnoxious Mom individual from Robby's Taekwondo classes.

She is the type of woman who creates a whirlwind of chaos in an otherwise calm situation. Her voice resonated through the studio like fingernails on a chalkboard. She excitedly shared her opinions with anyone who happened to be sharing the same oxygen in the room. She was quick to offer unsolicited life advice. One of the best parts of Robby quitting was the fact that we no longer needed to see this lady three times a week.

Seeing her at Chick fil A set off my fight or flight response. I just didn't have the mental energy to endure the awkward small talk and being peppered with judgement infused questions about why Robby quit Taekwondo.  Instead of  acting like an adult, I chose to hide among the forgotten socks and discarded nuggets behind the yellow corkscrew slide.

It definitely wasn't the most mature approach, but at least I didn't have to talk to her. Sometimes maturity is overrated!
at 7:06 AM No comments:

My phone was dinging all weekend long, but I didn't mind. I wasn't receiving work messages or new additions to my schedule. Instead, I was being inundated photos, messages and videos from Robby and Scott.  The pair had a wonderful father/son Florida Adventure. They kept in close contact with me throughout the weekend, allowing me to live vicariously through their activities.

While I was helping my mom tidy up around the house and chasing Timmy at the park, Robby and Scott were jumping waves in the ocean. Robby is drawn to the ocean and spent the majority of the day swimming, exploring the little animals in the water and playing in the sand. The water wasn't quite warm enough for Scott to become fully emerged, but he enjoyed wading and lounging on a chair while watching Robby play.  By mid afternoon they migrated to the pool before heading to meet with the Sea Turtle Internship hosts.

I'm so glad that I arranged for Robby to visit the Internship location. He learned a lot about the program and the meeting definitely put his mind at ease. He is excited about the summer and can't wait to start saving the baby turtles!  He is still actively fundraising, and donations can be made through this link.  (Please reference Robby in the comments so he receives credit.)

Saturday the pair spent the morning at the beach before heading to the Night Ranger concert in the evening while my sister and I took Timmy to the Y to play in the little toddler water park. With his brother and Daddy having fun swimming, it seemed appropriate to take him to a pool as well. The water was murky and suspiciously warm, but he had a blast splashing and kicking. He is definitely my little water bug. (He is delighted to be returning to pool school today.)

The plane was delayed yesterday, but my beach pair finally arrived home by early evening.  They were pink from the sun and tired, but I could tell that they had a great time.  Another great adventure is in the books. 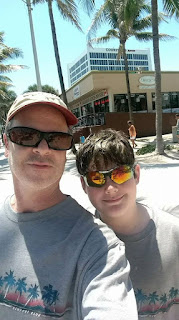 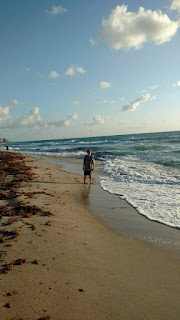