Robby has been looking forward to today for the past three weeks. He was worried when he was sick that our plans were going to change, but he has fully recovered and is going to be able to participate in today's adventure.  In my quest to celebrate springtime and create memories, I have resurrected "Adventure Fridays."

Each Friday Robby's school releases early allowing parents an opportunity to take their kids on day trips or to participate in other activities. In reality most of the kids at the school end up staying at school where they are shuffled to the "after care" room and essentially just babysat until the end of the day.  Robby is not keen on aftercare, and I always do my best to pick him up at the end of the instruction portion of his day.

In the fall we were in the habit of doing a fun activity every Friday. Typically I allowed Robby to invite a classmate along with us on our adventures, mainly because it is considerably easier wrangling him when he is with a peer.  We fell out of the habit of our Adventure Fridays over the winter, but with the weather changing, I have become inspired to bring back the tradition.

This morning I am picking up Robby and his friend Kabir from school and we are going to visit Great Country Farms.  (We recently bought a CSA membership to the farm which provides both produce and unlimited access to the property.) I know that the boys are looking forward to bouncing, climbing and playing on the various structures because they have been counting down the days since I proposed the trip a few weeks ago.

Robby is most excited about taking his friend fishing on the farm. Our fishing poles are ready (thanks to Mr. Bill) and we have three packs of cheap hot dogs ready for bait. I know that the boys are going to have a great time and that this will be a fabulous beginning of our new Friday tradition. Although Timmy is too young to really enjoy the farm activities and probably won't get much out of the fishing experience, he is sure to enjoy looking around and watching everybody.  I'm looking forward to a great day!

I fully admit that I have been in a funk lately. I suspect that the loss of my Dad is only beginning to hit me, and the reality that I will never speak to him again has left me reeling. I feel overwhelmed with grief when I contemplate the finality of his loss, so like everything else unpleasant I am trying to just push it out of my mind.

Thankfully, yesterday was just what I needed to snap myself out of my pity party! It was warm with the bright yellow sun shining against a brilliantly blue sky. Although I had a pile of work inside, I knew that the weather was just too beautiful to miss. I figured insomnia would be my friend, allowing me to work through the night to catch up.

It wasn't until I was outside, playing with Timmy, that I realized that I have been craving sunshine. I could feel all of my anxieties slipping away as I concentrated on just enjoying the weather with my little playmate. (In all fairness it is nearly impossible to be sad when you are surrounded by a seemingly never ending chorus of baby giggles.)

Because the temperatures were so warm, I decided that it was the perfect day to set up his new water table. Much like his older brother, Hamlet is becoming quite a water bug. He loves nothing more than splashing, pouring and pushing water around. Of course the "simple assembly" took me nearly an hour, so the table wasn't ready for water until it was time to go pick up Robby from school.  (The complexity of assembling what should be a simple plastic toy will never cease to amaze me!)

It turns out that waiting for Robby to come home from school before filling the water table was a great plan. I'm not sure which amused Timmy more, splashing in the water or the fact that his big brother was actively playing with him.  Although I know he enjoyed the water table, I'm fairly certain that he was more excited about the attention from Robby. His eyes light up with utter devotion whenever Robby takes the time to play with him.

The three of us spent several hours playing with the water table last night. By the time we were done everybody was thoroughly soaked. I guess it is time for me to pull my swim leg out again, because it took me a long time to drain the water out of my foot shell when we were ready to come inside.  The fact that I'm now squeaking is a gentle clue that I didn't quite get it completely dry. 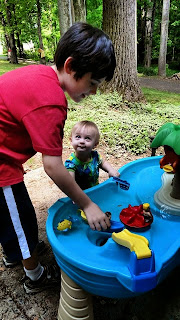 The past few days I have found myself fighting back a growing sense of anger. I'm not angry at anybody or any particular thing, although given the opportunity I wouldn't mind giving my well-crafted opinions to more than a few people.  Instead of having a specific target, my ire seems to be more undefined.

I don't particularly enjoy experiencing negative emotions, especially when they arise seemingly without cause, so I have been trying to figure out why I'm so angry. My husband's take was predictable as he blamed the hysterectomy and menopause.  Although I'm sure that there is some truth behind his assessment, I have a feeling it goes much deeper than simple estrogen deprivation.

I think I'm angry because I feel like I keep getting kicked down every time I rebound.  I turn 41 next week, and while I'm not excited about the number, I am delighted to put this year behind me.  40 has not been easy. It has been a year of physical and emotional struggles, all of which have completely worn me down. During the past twelve months I had a re-amputation, a hysterectomy, two rounds of chemotherapy and the illness and subsequent death of my Dad. I keep trying to find the silver linings, but I am growing weary of the search. At this point, I just want to throw up my hands, scream "It has been a horrendous year, and move forward.

So, after a few days of fuming and moping, I have come to the conclusion that this has been a crappy year. I'm tired of struggling, of being exhausted and of feeling overwhelmed. I have decided that being 41 is going to be far superior to being just 40. After all, next year has got to be better!
at 6:21 AM No comments:

Perhaps I was jumping the gun a tad when I wrote that everybody was healthy. Monday morning both Robby and Timmy woke up looking and feeling piqued.  At one point I actually struggled with the decision of whether or not to send Robby to school.  Lacking a fever, I decided to take a leap of faith and send him. I asked his teacher to call me if he complained, looked worse, or simply wanted to come home. Being a teacher, I know that nobody wants a sick kid in their class!

While I had no ailments in particular to complain about, I found myself struggling through the day to stay on task. I didn't feel bad, but I certainly did not feel well. Much of my day was spent trying to gather my thoughts and feign concentration.  I guess it is going to take more than a day or two to get over the Great Chenoweth Plague of 2015.

Yesterday my mind seemed to be mulling over just about every topic except the report that I was trying (in vain) to write. Most particular, I kept thinking about summer vacation. It is hard to believe that the boys only have 27 more school days left this year. (Even as I opened the calendar app and began to count the days left, I realized that I was wasting time and procrastinating work.)

Between the re-amputation and the hysterectomy, last summer was absolutely dreadful. I'm optimistic that this year will be better. I'm looking forward to spending countless hours by the pool, splishing and splashing with my boys. Nights by the fire pit, camping out in the yard and playing in the woods are all high on my vacation "to do" list. After the year we've had, I think we all deserve a return to the "Summer of Awesome."

We just need to get through the final five weeks of school.  We can do this! Of course, school is still in session so I'd better start at least trying to focus.

This year my Mother's Day wish was granted.  Nobody had a fever for the entire day! What an ordeal this past week has been. It is certainly not an experience I am ever anxious to revisit.  Thankfully, it appears that the Great Chenoweth Plague is behind us. While it is going to take some time for me to regain my strength, I expect a full and complete recovery is on the horizon.

It has been a long time since I've been sidelined by illness. I am so grateful that my Mom was both willing and able to drop everything to come down and help us out. I honestly don't know what we would have done had we not had her taking care of us. Unfortunately, my fears were realized, and she is now coughing and battling the return of her cold.

Looking at my schedule this week, I am already feeling overwhelmed.  Between missed meetings and delayed projects because of last week, coupled with everything I already had scheduled to tackle, my hours are packed. I am going to be busy, but I also realize that I need to pace myself. While I am feeling better, it would be easy for me to backslide if I don't take care of myself. Maybe I need to actually schedule "take a nap" or "veg out in front of the TV" on my calendar to make sure that I follow through?

Although I'm feeling overwhelmed with work, I am not going to work myself back into the sick bed. I'm going to try to tackle things on a priority basis. Triaging the most important meetings and projects first will hopefully help to ease the stress of trying to get everything done.

At least, that is my plan.  Hopefully I'll be able to follow through with my "easy does it no stress" return from the sick bed.  Wish me luck! 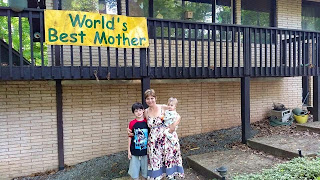