Earlier this week, as I was rummaging through my purse for a pull-up diaper, another Mom proudly declared that her son was fully toilet trained at 18 months. I smiled and agreed that it was wonderful before sticking the pull-up up my shirt and discretely guiding my wet little cherub into the bathroom. Unfortunately Timmy doesn't do anything discretely, and began to scream "no pee pee potty" with a sense of outrage and panic.

Timmy not only demonstrates zero interest or motivation in using the toilet, but he seems to go out of his way thwart our efforts. He melts down into tears and tantrums whenever I try to put cloth underwear on him. He has resorted to hiding in corners when he has to go to the bathroom in an effort to avoid going to the potty.

I've read the books, bought the trainer toilets and urinals, and purchased the potty bribes. In May I was confident that he would be fully out of diapers by the end of the summer. Labor Day is around the corner and I'm still buying Pull-Ups and Diapers. Needless to say, we have failed to meet our goal.

It is painfully obvious that I am not good at guiding a child through potty training.  In fact, I would go as far as to declare that I am a complete failure at potty training. Unfortunately for everybody, learning to use the potty is not negotiable. I'm in for a loud, and frustrating weekend as we continue our efforts.  Wish us all luck!

Timmy is not handling his Daddy's return to work gracefully. Each morning he is in tears, wrapping his little arms and legs around Scott and holding on as tightly as possible. After we pry him off and Scott makes his departure, Hamlet breaks down crying. It doesn't take long for his cries to morph into a full blown tantrum, which I am forced to endure until it passes.

I am hoping that his reaction softens as this routine becomes our new normal. I hate seeing my little guy so distraught. While I know that his tantrum is not fun for me, I am confident that he is miserable as well.

I would love to pack up Timmy and Robby to escape to the pool to enjoy our final days of summer. The sky full of rain clouds and a broken refrigerator thwarted that plan. So instead of playing in the sun I am going to be waiting for the appliance repairman.

Last night the skies opened up and the rain showered down for hours. Our yard is again a sloppy, wet mess. At this point I have completely given up hope for the rest of the summer. Instead I am hoping that the Fall is full of beautiful leaves and bright sun shine against blue skies.

In addition to our yard and our roof, my leg has also been feeling the wrath of the rain storms. It seems that the pain becomes more intense and more frequent with each storm. Last night my ankle (phantom) was aching so much I was almost on the verge of tears. It is incredibly painful and frustrating to feel that your missing ankle is somehow sprained.

Moving around buckets to catch the drops coming into our house, I was struggling to walk. It was painful each time I fully loaded my prosthesis. I removed my leg and liner numerous times, hoping to find a magical sweet spot to allow me to walk without pain. (I knew that my attempts were futile, but I felt like I needed to at least try.)

Eventually I took some Tylenol, grabbed the heating pad and went to bed for the night. Thankfully the sensation that my ankle is sprained has vanished. Now my limb just feels sore and tight, but completely manageable.

I am walking without my limp, but I plan on taking it easy today. I feel like my body is trying to tell me to relax and take it easy. An injury right now would be catastrophic, so perhaps it is time I actually start listening to my body and following the cues.
at 7:16 AM No comments:

It is hard to believe that another school year is beginning. It feels like it has only been a few days since we celebrated the last day of school. Between travel, day adventures and lots of cousin time, the weeks have flown by. This summer has been especially memorable for Robby. I know that he will look back on these two months for decades to come.

Over the weekend he finalized a video from his Internship. He filmed everything with his night vision scope (thanks to Nana for the wonderful Christmas present). After sifting through hours of raw footage, he compiled a video to commemorate his experience.  Enjoy!

We decided to delay the potato dig until Sunday in hopes that the fields would dry out a bit. We realized that we miscalculated when another huge thunderstorm rolled through the area on Saturday night. Undeterred, we put on old shoes and grabbed our bags to embark on our annual potato hunt.  With all of the rain we have been receiving lately, I suspected that the fields were going to be muddy.  My muck expectations were exceeded. Whereas Timmy had a blast splashing in the mud, the rest of the family spent their field time artfully dodging the puddles (as much as possible).

Finding the potatoes was easy, but getting to them was a different story. I'm not afraid of dirt, but mud fills me with anxiety because it is easy to slip and fall. I was hyper cognizant of every step, carefully calculating my options and the preparing to slip with each movement. Thankfully I didn't end up on my bum, but I did slide around quite a few times.

The slick mud definitely complicated a fun tradition. While we still had a good time, the event was not as carefree as it has been in the past. I was worried about falling, Scott and Robby were concerned about becoming too muddy and Timmy's loyalties were torn between puddle jumping and finding potatoes.

Despite our efforts, we were muddy from the knees down. (With the exception of Timmy, who was thoroughly coated and gleeful in his filth.) Thankfully we had the foresight to bring extra shoes with us. Unfortunately there wasn't anything I could do about my muck covered foot shell. There weren't enough wet wipes in the diaper bag to get that thing clean! 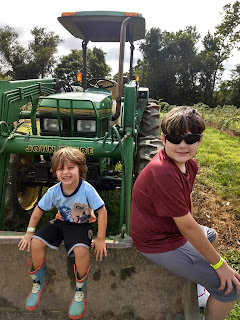