Being on the Diane Rehm show yesterday was a memorable experience. Thankfully, Scott took off work to escort me into DC because, let's face it, navigating the Metro and the city streets is not my strength. I was happy for the extra set of hands to get Robby ready for school allowing me the opportunity to primp and to go over my talking points one more time. Unfortunately, I failed to notice that Scott dressed Robby in his dedicated fence painting shirt (riddled with droplets of dark brown wood stain) and a pair of dark blue pajama shorts which were chosen because they "looked comfortable." If the school has a problem with my showing my socket, I'm sure they were offended by Robby's attire!

After dropping my little pajama wearing boy off at school, we hopped onto the highway and headed towards the Metro. I tried to keep my nerves calm, and the fact that I didn't vomit or cry is an indication that I was at least quasi-successful! True to the internet schedule, we arrived at the station on time and had 30 minutes to spare before the show went live.

As soon as I sat down in the studio, put on the headphones and the little light above the host flashed "on air," my anxieties began to fade. I tried to pretend like I was talking with a friend who was interested in my life. For the few opportunities that were provided for me to speak, I think I was successful.

While I am pleased with how I portrayed myself and the community, I was disappointed by the tone of the show. I was hoping that we would have been able to explore the availability and financial constraints that purchasing bionic technology places upon the amputee. Unfortunately, the DARPA arm was a source of fascination and monopolized the majority of the conversation. I was never provided with an opening to address any of my well-honed talking points.

As it turns out, this show did not make the inroads towards obtaining equitable access to prosthetics that I had hoped, but it wasn't because of my lack of trying. I attempted numerous times to bring attention to the issue of insurance fairness and the cost prohibitive nature of these technologies, but I wasn't able to redirect the conversation. At least I know that I made a good effort towards starting a conversation. I'm going to keep trying because one of these days, somebody will listen!

In case you missed the show, you can watch and listen on this link.

For the past few months I have been podcasting with a fellow amputee. Although I think that our discussions are both enlightening and entertaining, I have been hesitant to promote the venture because of one small issue: I absolutely hate the way my voice sounds on recordings. As it turns out, I am much more comfortable hiding behind a keyboard!

Today I am moving outside of my comfort zone, and although I'm uncomfortable, I also realize that I can't hide from opportunities because of my fear. Earlier this week I was invited to be a guest panelist on the Diane Rehm radio show (syndicated nationally through NPR). Although I was thrilled by the invitation, it's safe to say that I haven't slept well since the plans were solidified.

I have done numerous television and print interviews over the years. Although I always feel a surge of anxiety when meeting with a reporter, I have always been able to rally and squelch my fears. Today is my inaugural radio interview, and the new format has thrown me for a loop!

I know how to tell my story and how to speak effectively to topics impacting the community. I am passionate about the topic of today's broadcast (prosthetic technology and its availability to the civilian population), and I know that I am both experienced and well-versed with the details. I don't doubt my competence, but I do worry that I'll become nervous and tongue-tied as soon as the broadcast starts.

The way I sound resides at the top of my worry list for today. I've been promised that my own negative perceptions of my own voice are not echoed by others. Despite hearing these reassurances, I have spent the past few days trying to improve my sound. Unfortunately I have only managed to uncover an uncanny ability to speak like a cross between Daisy Duck and Porky Pig, with an accent that has never been identified by a linguist.

At the urging of my family and friends, probably because they are tired of my calling them in order to practice my refined dialect, I am waving the white flag when it comes to the way my voice sounds. I am going to have enough anxiety making sure that I communicate effectively. Although it would probably be wildly entertaining, trying to add "change my voice" to the list of things remember during the interview is a recipe for disaster!

I'm excited about the opportunity to represent the civilian amputee population. The show is being broadcast live at 11:00 today on NPR stations nationwide and I hope that you can tune in and cheer me on. Wish me luck!

Robby only has 25 days of school left. The fact that I am counting down should be an indication about how eager I am to put this school year behind us. Ever since I was asked to cover my prosthesis, I haven't felt comfortable walking into that building. In my opinion, Robby's school is one of the last places I should feel unwelcome, yet now my anxiety begins to rise each morning and afternoon when I know that I have to enter those doors.

I have stood my ground, wearing shorts and a smile each day. To onlookers I have tried to exude confidence. Inside, I feel like cowering and hiding in the corner. I find myself analyzing each conversation, no matter how benign and casual, paranoid that I am speaking with the individual who finds my prosthesis so offensive. I am tired of feeling critiqued, and I can't wait to leave that school for the final time!

I wish that I actually felt the confidence I have been portraying, but for right now all I can muster is pretending. Part of me feels like a failure, that I should be far more comfortable within my own skin (albeit carbon fiber), and that I shouldn't care what the naysayers believe. Deep down, I am hurt that something that is part of me is viewed as a monstrosity that should be hidden from view.

Despite the anxiety, I have no plans to abide by the request to cover my leg. I will continue to wear shorts, hold my head up high and smile broadly at everybody who looks in my direction. Knowing that I am more than the part that I happen to be missing, I will quietly make my stand. Hopefully as the 25 days tick by, I will begin to fully embrace all of the confidence that I am trying to demonstrate!

I have been loving my new socket. It is wonderful to wake up in the morning, slip on my leg and know that it isn't going to hurt when I take the first few steps. The absence of the little aches and pains in my limb has been liberating.

Walking through Kohl's the other day, I glanced an image of myself walking in a display of mirrors and I was horrified by the reflection. My limp was atrocious! Obviously I had picked up some unfavorable habits during the past few months. I realized that if I didn't correct the issue now, it would only become more ingrained and difficult to change later.

Seeing myself walk, coupled with receiving my new leg, has spurred me on to reestablish a correct gait pattern. In an attempt to mitigate the discomfort I was experiencing, my walking style had become compromised and disjointed. It feels like every aspect of my walking was impacted by my socket pain. My stride length has become uneven, and I have noticed the tendency for me to lift my leg and swing from my hip rather than bending my knee. Although it is easy to rationalize the reasons these habits, I also realize that I need to force myself into a less sloppy walking style.

Every day I have been going for a long walk through the neighborhood. With each step I concentrate on the mechanics of walking. Usually an escape from work, my afternoon walk has been transformed into a self-directed physical therapy session. Needless to say, they have become anything but relaxing!

Still conscious of each step, I can tell that my efforts are yielding results. Yesterday, in order to gauge my progress I videoed myself walking. I still have some tweaking to do, but my limp is nearly gone.

I've learned two valuable lessons during the past month. First, I need to better assess my socket fit and stop accepting the little inconveniences as "part of amputee life." There is no reason I should be settling of anything but a perfectly fitting socket. Secondly, I am going to have to reevaluate my gait on a regular basis. Bad habits are sneaky and become part of my natural style without my realizing it. Being aware of my patterns by objectively watching myself periodically will hopefully help to mitigate future habits from forming.
at 6:40 AM No comments:

Yesterday morning I was lying in bed, feigning to sleep as I heard the clanging of pots and pans, the not so loud hushed whispers and the occasional "oh crap" being shouted by both cooks in my kitchen.  By 8 AM my breakfast treat was delivered. Robby handed me the plate and immediately crawled into bed next to me. He eagerly offered to "help" eat my bacon and began to munch away.

By 8:10 I was cleaning up my kitchen and making a second skillet of bacon. Robby and Scott hung my "World's Best Mother" banner and were playing XBox as they waited for the bacon to be delivered. I began to wonder how such a mess could arise from making one breakfast!

Despite cleaning up the disaster area, yesterday I artfully avoided all chores and responsibilities. Much of the day was spent with Robby, watching him skate and playing with him outside. He was sweet, offering me spontaneous hugs and wishing me a Happy Mom's Day without prompts. He even tried to give me the wish that he earned by blowing on the dandelion fluffs, but it was eventually decided that the wishes were non-transferable.

Before I knew it the day was over and everybody was tucked into bed. My day without work certainly flew by! Today it is back to reality and to tackle the chores that I ignored yesterday. Perhaps taking the day off was not the best decision.

I hope that everybody had a wonderful Mother's Day! 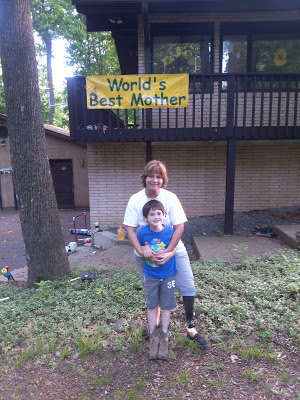 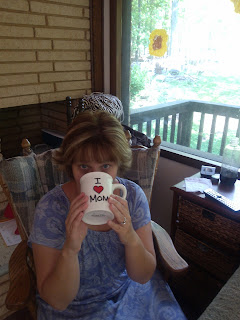 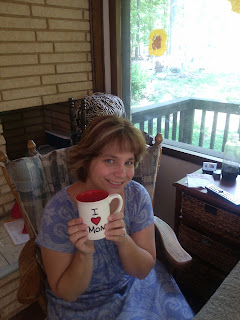